There's probably some sort of statistic somewhere, where X is the amount of time of having a blog and Y is the rate in which the blogger starts to quote poetry and prose....

Do you like it when blogs do self indulgent year end summaries?  You do? Great, because here's mine.  But really; when I started to read blogs more often, I began to look forward to these type of posts because I did think it was interesting to see what other people had accomplished and done in a year; sometimes quite a lot and sometimes not so much.  And how plans had changed or not,  etc...  and how the posts presented a small snapshot of wargaming hobby goodness.  Hopefully this will be somewhat like that.

In the future, what I actually get produced for the table will get easier to accurately track because of having this blog, but this year I guess-stimate that totals are:


Dark Ages:
I vague remember doing some repair with some 28mm Normans back in January, because the last game I did with them I dropped a tape measure on top of the figures.  They likely deserved it.

Terrain:
Some stream pieces
some fields (can be seen HERE)
some cornstalk bases for cornfields (HERE)
LOTS of snake rail fences

and an unaccounted number of trees.

So the clear winner here is ACW, as most of the miniatures and all the terrain is toward that genre.  This is not surprising; what happened is I clearly hit the threshold of having 'enough' ACW stuff to start playing it a lot, which increased motivation to expand the collection and it became something of a virtuous circle; that I and REALLY enjoy that period and genre.

What's also clear is my "rule of two" guiding principle: Where I only work on 2 projects at a time.  More on this in some future post.

We'll focus on games played rather than games won or lost, because really it's the playing that matters.  You can assume that I win ALL my games through a combination of guile, cunning, audacity, superior generalship, propaganda, and outright cheating ("hey I rolled all my saves while you were looking away / in the bathroom and it looks like I made every one. What are the odds huh?")
When I started to track my gaming back in 2016, I set a goal of 24 games a year.  I reckon this averages out to 2 a month, which feels realistic enough to accomplish.  Honestly, 2 games a month with the odd convention here and there is about all the hobby / game time I can manage anyway against other obligations.  24 games feels like I actually have a hobby of 'playing games' that I enjoy responsibly (painting and production is also an aspect of my hobby, but really the goal of any production is to play a game with it).  And by Games I more mean "A distinct gaming experience."  How's that for a vague definition?  Games 'count' when played at the club, at a convention (in which case there are usually 2 or maybe 3 a day),  hosted at my place or someone else's.  All miniature wargames count (because they're my FAV-orite), and some boardgames count more than others.  Can you really compare Starwars Rebellion to Small Worlds? No you cannot.  Games of  Disney Princess Memory or Uno played with the 4 year old do NOT count because she wins too much.

Let's break it down by type shall we:

Miniature Wargames:
x1- Chain of Command (WWII).  I used to play a LOT of WWII and have a sizable collection, but not this year apparently.
x1- Charlie don't Surf (Vietnam) see post HERE
x1 - Form on Admirals Wake (Age of Sail).  Played this at Kublacon and loved the genre so much I started it for myself.  A couple of games played in one sitting equals 1 "distinct gaming experience."
x1- Highlanders and Habitats (FIW). Played at Conquest Sac.

x1-Kiss Me Hardy (Age of Sail). can be seen HERE
x1- Picket's Charge (ACW).  I will blog about this game in the future...
x1 Pike and Shot.  played at Kublacon
x1- Post Captain (Age of Sail).  Really liked these rules for AoS, might be the go-to set. see the post HERE for review.
x1 - Rank and File.  I like these rules, played at a con the "Battle of Lingy."  Played at Conquest Sac. 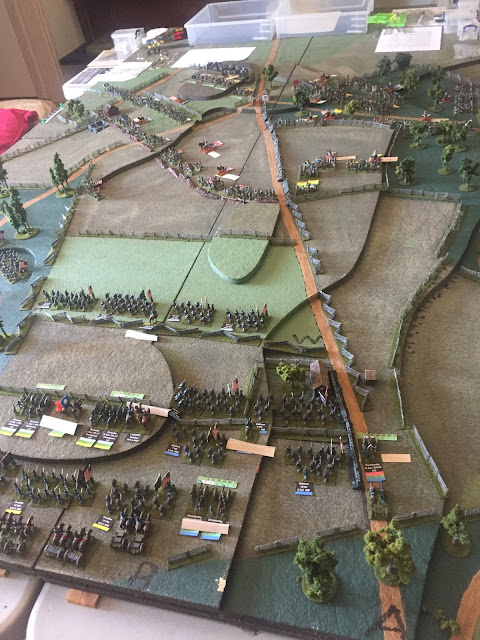 x1 Sharpe Practice2 (AWI). see post HERE
x1 Xwing mininature game.
x1 year end game. Haven't played yet but it's on the schedule for this weekend.  Something about Pirates. I've RSVPed and unless prevented by sickness or worse, it shall happen so we'll count it.

= 19 miniature wargames.  Not bad.  The clear winners are ACW games (7 RFF and 1 PC) and AoS games (3 of those), which nicely mirrors what I was producing from my hobby table.  Some people would call that 'synergy.'  The AoS games are all on different rules, which reflects the starting of a genre and getting the feel of different games to find the one I like most.  The rest of the list are really just one-offs and reflect me playing with other people's toys at conventions, houses, and / or the club.

It's curious there are no Dark Ages games (Viking, Saxons, and Normas oh my) as that's another genre I enjoy and have a large collection of figures.  oh well, they all can wait in the garage until I need them!  Or maybe I just forgot; I kinda remember a Lion rampant game somewhere...

Board games:
x1 Blood rage (that's a good game, Vikings and Valhalla, what's not to like?)
x1 defenders of the Realm
x1 Guardians of something or another, I really don't remember and I believe it was French.
x1 Level 7 omega Protocol
x5 Starwars Rebellion, (twice with the expansion).  I LOVE this game.
x1 - and in the beginning of the year I had a bday boardgame weekend where there were lots of smaller games played over 2 days; things like Small Worlds, Ticket to ride, Settlers of Catan, Formula D, Carcasonne, etc..  We'll only count this as 1 instance though.

= 10 board games.  The clear favorite is Starwars.  In fact that was probably the only board game  where getting to together was for the express purpose of playing Starwars, because it's that awesome.  The rest were played at a con or some such as part of a larger game day.

= grand total of 29 games!  GOAL ACHIEVED,  I AM WARGAMING LEGEND!!  but just barely.  It was attending two gaming conventions that sealed the deal.  I'm sure others have way more games, maybe some less.

I gained some weight and drank a lot of coffee this year.  I also lost a tooth, so my smile is..unique.


Stay tuned for Part II, beginning 2018; up coming plans and pitfalls, and as always;
thanks for reading.
Posted by Stew at 3:28 PM