Sharp Practice 2 (at the club)


Over the weekend I got in a game of Sharp Practice 2 at the wargame club meeting.

I'm a BAD club member these days, I've haven't gone to meeting in months (and then some more months).  When I was in the bay area, I had no use for clubs  because I had a large enough group of wargaming friends and we all played together.  But when I moved to the SAC area I knew no-one, so I joined the local club (actually, I joined two).  So far, everyone I met through the clubs has been a good person.

But I haven't been in a long time, mainly because the club meets during the day, like 10AM through to the late afternoon, and honestly this is just a bad time for me.  It's easier for me to do wargames that start at late afternoon and go through the evening.  It's just the rhythm of my life; later games mean I can attend to some family stuff / whatever and then vanish for the rest of the day.  Also, while playing at other locations (like game stores, libraries, and such) is perfectly fine; my preferred gaming location is my own house.  There's a reason that while we were shopping for houses I made sure that there would be a room with enough space for hosting wargames.

But this weekend I was able to go, and was extra motivated because Mr. R, a very nice man and good guy gamer, I always try to play with him, was hosting a game of SP2 during the AWI. 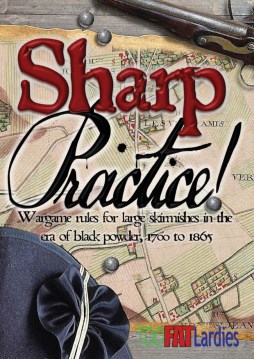 I've had these rules forever, and have yet to play them, so I was excited to give them a go.


4 players plus the GM, and I was given 4 leaders (all status II) and basically 4 units to control of glorious and brave soldiers of the army of the new United States of America.  1 unit of awesome skirmishers, 1 unit of NOT awesome skirmishers (these guys were really on good for taking long range shots from cover so I of course used them up front to guard a flank), and 2 units of 2 groups of line troops.  That makes sense if you know the rules.  Everyone had 3-4 Leaders / units.


Like most TFL games it tends to start pretty slow and then ramps up as the battle unfolds and things get heated.  I had a Hard luck game though; one leader got knocked out early on (like turn 2) and NEVER recovered; robbing me of much needed command initiatives.  Also latter in the game, my large formation had a random event and suddenly all the powder was damp, firing at 1/2 effect.

The casualties were light, but SP is not so much about removing figures so much as it's about inflicting enough 'shock' on the units that they quit the field.


I tend to like card based activation games, though they can be somewhat frustrating if the cards turn against you...which is where SP2 really shines with it's command cards,  as you can spend the cards to activate your units.  For example: my large formation in the middle of the action had taken some serious shock, and because one leader was knocked out I only had 1 status II leader to manage it all, he was having trouble rallying his men.  The turn was winding down, and the leader had yet to activate, but there were 3 command cards available.  I could: use the cards to activate and get the usual 2 initiatives, or gamble that the leader card would come up before the turn ended and then use the cards to get 5 initiatives;  allowing to rally off 4 shock and still activate to fire.  A good risk versus reward decision.  I gambled, and the next card ended the turn.... leaving my brave troops in poor condition.


And Low and Behold, there was a game of Form on Admiral's Wake!!  Random AoS game.  Seems like me getting into naval sailing games just shows that I am on the pulse of gaming fashion!  The host was also just getting into AoS fresh from some AoS fun at Historicon,   So we talked about our experiences of getting into AoS gaming.


That's all for now.  See you next time.