I placed an order at Waterloo Miniatures for more Napoleonic Age of Sail goodness and when the package arrived I laid the items out to double check it was all there (not that I've ever had a problem with Waterloo Minis, it's just something I do with every order). 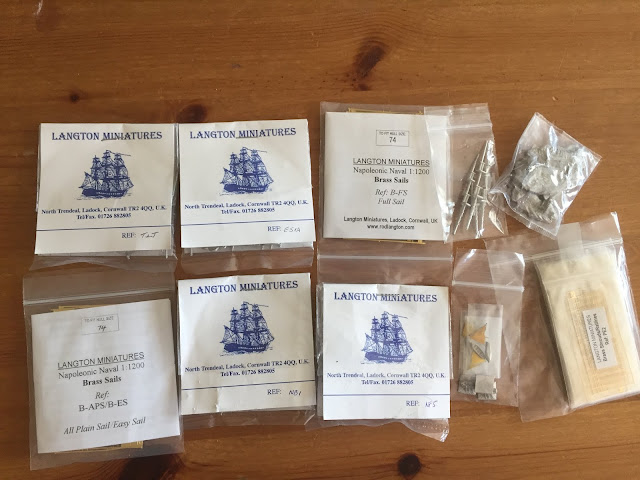 1 French 80 gun ship (hull, masts, sails) - because obviously the French need some additional firepower.
1 British 74 gun ship (hull masts, sails)
6 small boats (The idea being that these can be used for some sort of marker; for instance in Post Captain damage to a ship in the beginning of a turn can trigger a command test at the end of the turn which can be several minutes later if not longer and players forget.  The little boat can be a reminder).

-or simply just to represent boats I guess-
6 mast with brass sails (I have idea to make markers for when a mast is dragging next to a ship)
1 set of 4 fallen mast markers (masts floating in the water, for after the wreckage is cut free).


And looking at the order I thought "Stew my main man, I think you've lost some weight, good job on your diet."  But more importantly I also thought "I am KILLING IT when it comes to AoS project management, self high five!" 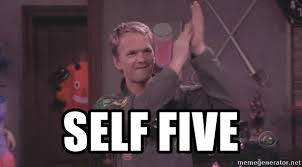 What I mean is; after this lot is painted up (and it's not really a lot of stuff) then the Age of Sail project will be complete* with NO lead pile left over.  Everything bought will painted and ready to go.  No over buying, no wasted money, all ready for play.  For me, that is a Project Management High and represents some good hobbying.  As I've said before, I'm not a huge fan of having lead piles (and plastic piles) because I see that as wasteful.  And with time, experience, and self awareness I've gotten much better at knowing what I can accomplish, how much time it will take, and have become much more selective about what I am doing and what I am buying.
-yeah, I know it's not done yet and this is a premature high, but it's such an ity bity leadpile, but needs must wait until next month as for now I have to focus on finishing some ACW stuff for Pacificon at the end of the month.  (about 2 weeks away and counting!)

*by complete; I mean complete-for-now.  There's always the possibility for more but with these two ships and markers complete it will give me a grand total of 8 ships (4 per side) which is enough for any game of Post Captain.  It should be enough to also start trying out some fleet level rules.

Project Management Lows, or "What Else is Laying Around Here?"

And looking the AoS lead pile reminds me of the other less than perfectly complete projects that I have laying around.  Staring me in the face with unpainted eyes accusing me of neglect (not that they would have eyes even if I painted them as I don't paint eyes..)

After Pacificon  my 'convention season' wraps up as there are no more cons on the horizon, probably none for the rest of the year.  Which is nice in a way, because then I can stop focusing on putting on convention games for thankless strangers and get back to playing with local friends, maybe even attend the odd club game day.  But it's also a time a reflect on what might be the next new genre or project to start for next year.

And there ain't nothing for a new project like some old project (what is old is new again!).   Maybe it's a good time to start focusing on some of these other disturbing lead piles laying around here and get those projects into the same awesome state as the Sailing Ships.

Like the Dark Ages?  There's more than enough Vikings, Saxons, and Normans laying around...

Besides generic historically possible scenarios I've long had designs on doing the famous battles of Ashtown, Edington, and of course Hastings.

Or what about all this Lord of the Rings stuff?

I even started making some nifty ruins... 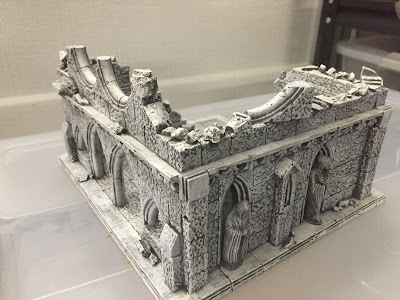 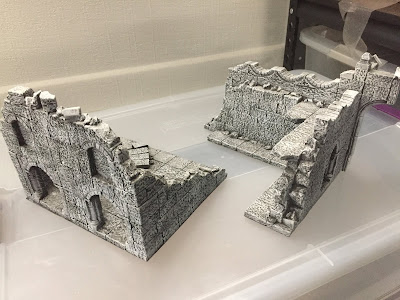 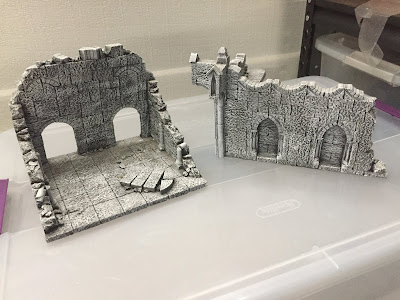 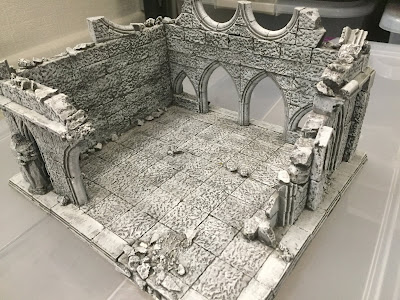 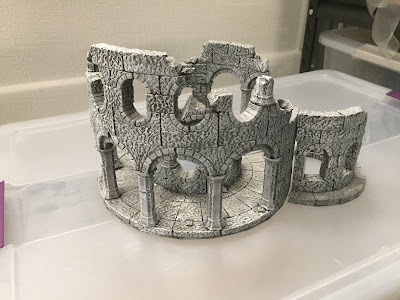 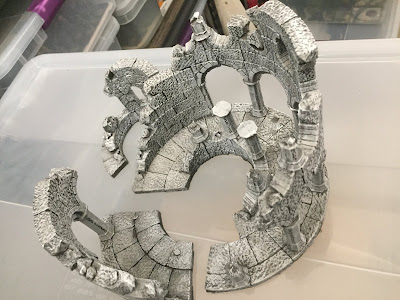 Or how about some Wild West? Here's a whole Dead Man's Hand project that hasn't even gotten off the ground.... 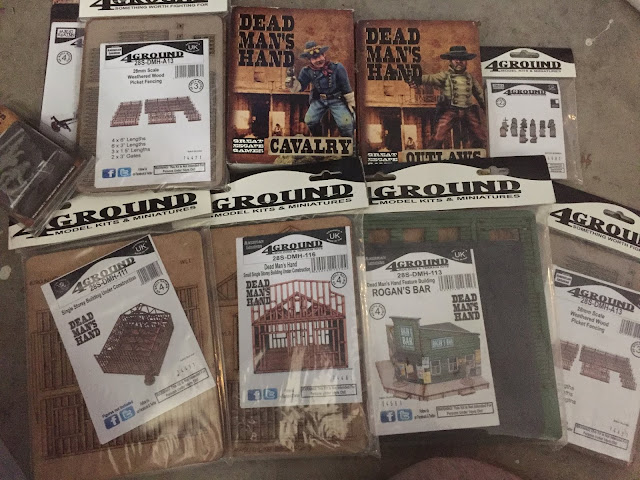 though Wild West / Dead Man's Hand is something of a trap.  Sure, you only need about 10 miniatures per side. But then you need a whole western town to shoot it out in.  So like $30 bucks for the miniatures and like $300 for the terrain.


Or I could get a move on with my WW2 Rebasing Project.  When I was getting into WW2 games the hot rule set was Flames of War.  Which I did play for many years and liked it up until the point that I didn't.  Now I'd like to have all these guys based individually for rule sets like Chain of Command or what have you.


Side discussion: When Flames died...

I remember when I suddenly stopped liking Flames of War.  It was when I hadn't played in a but and then went to an tournament for fun, see folks, and play the game of course.  I took some Panthers bc I thought; "I don't really want to think too hard, so I'll take some big powerful point expensive tanks so I'll have less to carry, but I'll be tough and able to take some shots."  Played my first game against a nice fellow that I don't remember well.  I deployed my panthers, he deployed some Shermans right in front of them.  I said, "you sure you want to do that?"  "Sure, I have the first turn." he says.  'Alright'  I say, and think it's strange bc shermans can't hurt Panthers from the front and even if he moves full speed I'm gonna hit most of them on the next turn.  First turn:
"I'll fire the Shermans at the Panthers" he says.
"I guess, but you can't hurt them?" says I.
"Oh, these are the Shermans armed with the armor penetrating ammo."
"the what now with the armor what?"
"yeah, it's in the new codex / army list / book."  He says.
-sure enough, there it was, a whole codex that I've never even heard of that had Shermans with completely different stats; result: 4 dead Panthers. I remember that the player was nice and not being sneaky, just assumed I knew.  but that experience and some others like it lead me to the thought of "I'm not playing games where the rules and stats keep changing."

Now where was I..


OH, and for completeness sake, here's the ACW  pile. 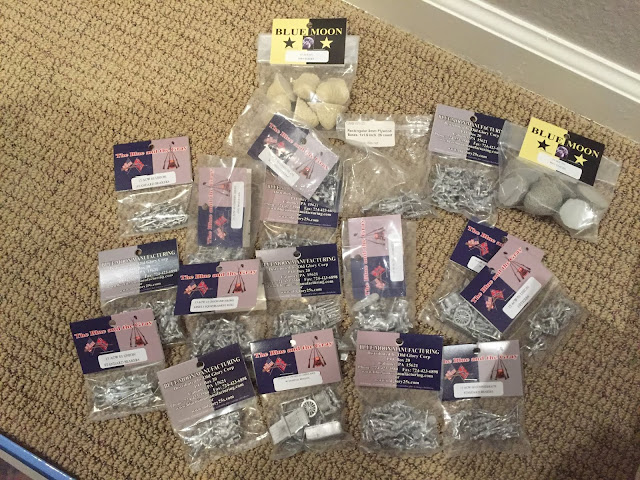 SO maybe before I start some new project..

-say like AWI using Muskets and Tomahawks rules.  Figures can be Blue Moon 18mm purchased from Old Glory just like my ACW suff, where I already have an Old Glory Army card for a 40% discount, and then because it's the same scale the ACW terrain like all those snake rail fences and trees could be used as well...so it really wouldn't be a huge thing to do and I really like AWI....


.. I could pick one of these old ones again.

Who knew this was a thing?  I did, as I did a post about it last year, seen HERE.  : )
This year because my life is not my own, I could't host a game with actual people, so to celebrate I did a solo game of Post Captain, late at night while everyone was asleep.  I broke out 3 of my Langton ships and came up with a scenario.  Here is an AAR and some additional thoughts..


"A Bear and Two Wolves" Scenario

In the year Eighteen Hundred and mumble-mumble two opposing fleets in the Atlantic were doing to maneuvers to bring each other to battle when a sudden storm hit.  It blew hard for a day and night and scattered the ships pell mell.

At the next dawn when the sky cleared with a fresh wind; 3 ships caught sight of each other.  The French 1st rate Repubician, and 2 British 3rd rates Spencer and Orion.

Despite being the bigger ship, the French captain didn't want to fight 2 versus 1 so tried to run, while the 2 British captains saw an opportunity for glory and promotion so signaled to attack.  The 2 British ships began to chase the slower French, throughout the day gaining on her from astern.

As the British close in, all ships clear for action and set battle sails.

The scenario:
A classic scenario of two smaller ships versus one bigger one.  The British 74s want to capture the French 110.  The French wants to get away to find it's fleet again.

All Captains are rated as Elite (more on this later).
The British crews are rated Crack, The French crew is Regular.
The British start behind the French ship just inside 400 yards.  All ships are running before the wind.

-During the AAR, I'm going to put a F or B behind each ship name to remind readers which side they belong to (because I always forget and get confused when I read AoS AARs).

Well, I enjoyed myself with a fun little naval game late in the evening.  I probably could of played a few more turns but it just got too late and that baby boy is going to wake up very early in the morning hungry.  And the French did not seem to be in a good position worth fighting it out.

I thought that a scenario like this would be interesting and give me a chance to practice maneuvering the ships to gain tactical advantages because honestly... I'm not that good at it. : )
And it was a nice refresher of the PC rules which I like more and more, especially for a game this size.  The rules have a medium level of complexity, but they create fun decision points and you do feel like you are captaining the ship.    Basically the mechanics do a good job of supporting the period feel.

I have learned in PC that you want to make the Captain's skill very high.  All it does is effect the Command test, which is the morale test.  If set too low the ship might withdraw / strike with only moderate damage.  I think you also have to be consistent with your gunnery.
The British were methodical: shooting high until the rigging was compromised and then shooting low for the rest of the game to pummel the enemy into submission.
The French ship was more inconsistent, sometimes firing high and sometimes low.  Still, the Spencer was looking shaky after a few broadsides.

The poor French did have some HARD luck.
-Over half the game the ship had reduced speed either due to an eddy or due to dragging the fallen mast.
-Failing the first rigging check and the mast falling was very bad (and somewhat unlikely, needing a 10+ on a d12), because it basically made the ship sail straight ahead down wind for 3 phases (1 turn), allowing the British ships to pounce. So just when she needed to zig-n-zag most, she couldn't.
-The British had a slight advantage in initiative as they get a +1 for the crack crews, but they got it an awful lot.
-The French gunnery rolls were somewhat low average.  The British had some hot rolls.

Anyway, I hope that was an enjoyable little post.  I'm still pretty new to the AoS genre but I am enjoying it.   Now I'm off to order more ships!