Link to the first post in this project is  HERE

link to the second part of this project is  HERE


So There I Was

About to bemoan my circumstances of having a lack of hobbytime lately when the hobby Gods smiled down upon me and said "Lo, let there be a weekend where the wife takes thy kids to San Jose and doesn't come back until Monday night to take pictures with Santa.   So shall it BBBEEEEEE!"

And so it was, leaving me with only my father to look after for a weekend which basically meant there was an increase in free time, because it's not like he needs constant supervision, and especially in the evenings after he went to bed; There I was, just a man and his hobbydesk...

I took advantage to complete the construction phase on the LOTR ruins.

My Life is Ruined

Completing the ruins was a simple process of just gluing bricks in place all according to the previously mentioned weak plans.  In trutth, this was mostly done in fits and starts with this last weekend the time to seal the deal...

I also wanted to start making the ruins look...ruined; meaning having broken blocks and little rubble piles in the right places.  I'm trying for a balance of having enough broken stones to make it look cool but not so many that it will hamper game play.

There's two ways to make rubble: 1 way that I employed often was to take a pair of pliers and mangle the ends of the blocks before you glue them , especially where part of a wall has fallen down.  The second way to get a bunch of rubble / small broken bricks is much more therapeutic..

After the structures were complete I wanted to add some ground texture to the MDF wood base that all the buildings were sitting on.  Usually I use concrete patch on the bases of my miniatures because I like the texture and it's heavy; which gives the minis some heft.  But this ruin is large and is going to be heavy enough without adding concrete to it so I needed another substance.  Besides, even though there were recently pictures of me on the internet with power tools to prove my manly strength, I got weak skinny arms.

I was also armed with a gift card to Micheal's, so while I was looking for Vallejo Pumice there was none to be found, so what I walked away with was: 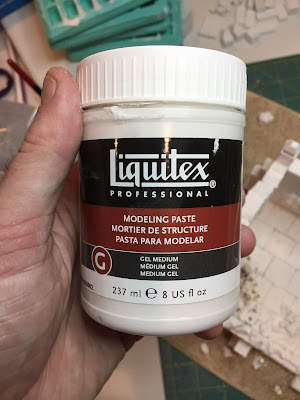 Which seems to be close enough, but it didn't have much texture to it as it was pretty smooth.  My solution was to added texture the same way I add texture to acrylic caulk when I make stuff with that: 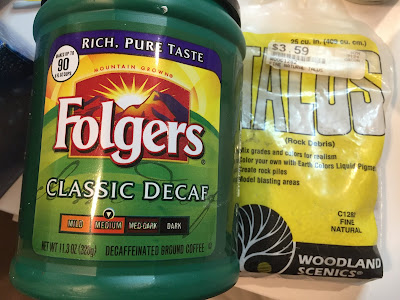 I then took a plastic knife and smeared it all around the bases of the structures.  Like so..

While I was doing that I also coated areas with watered down glue and added rubble and small rocks where I thought appropriate.

Letting everything dry overnight, the next opportunity I placed a bunch of 28mm Warriors of Minas Tirith (Lord of the Rings Miniatures) in the ruin so you have a sense of scale in the pictures... 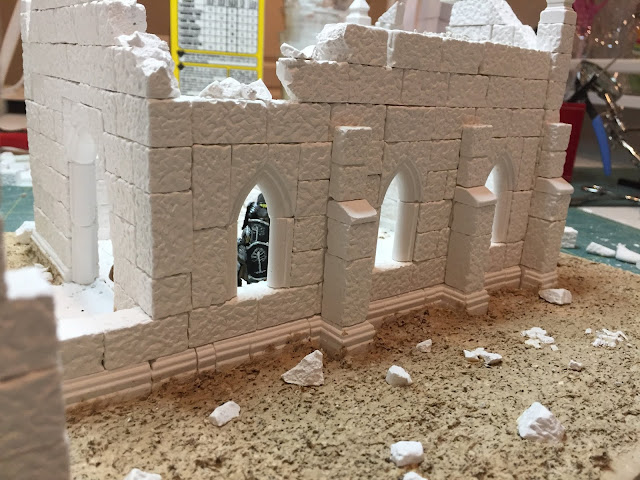 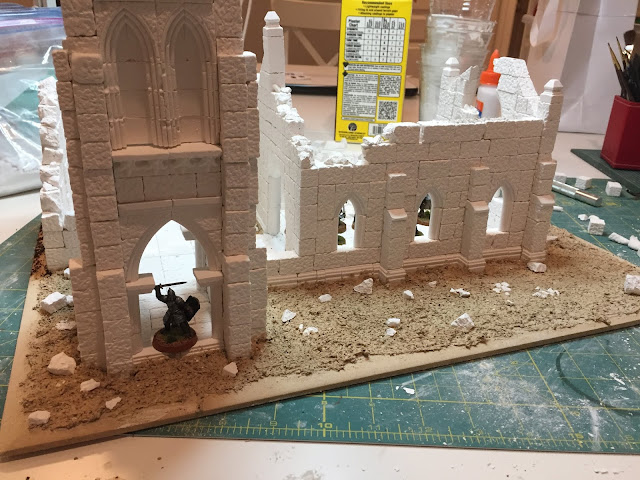 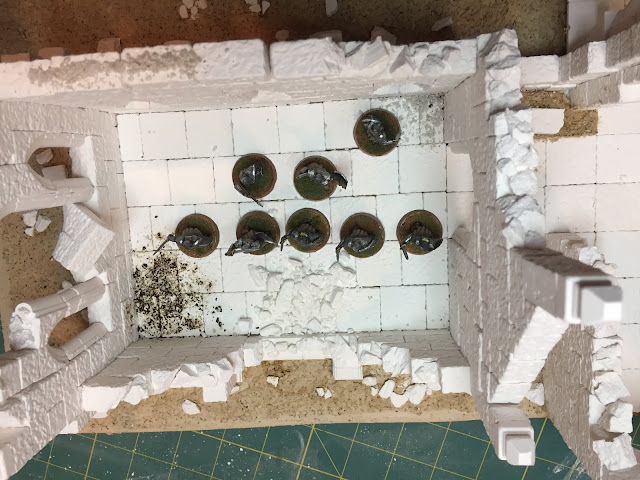 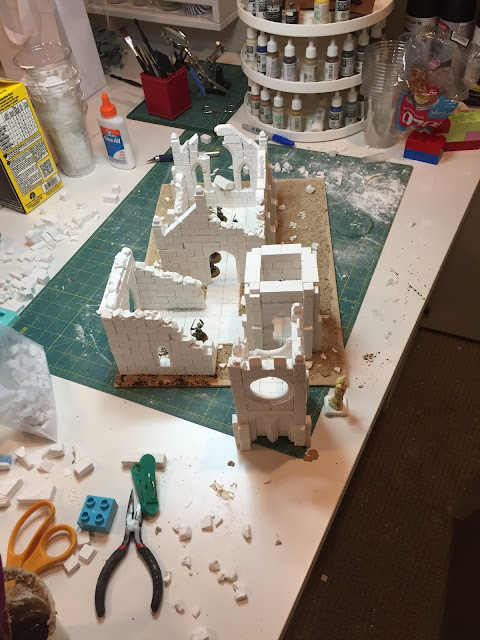 Now all I need is a weekend where it's not raining or freezing outside so I can prime it black,
and then I can get to painting the damn thing.

I hope I don't ruin it with painting it (see what I did there).  But seriously, this is a frightening and exciting stage of hobbying.  The project is really starting to come together but there's still so much to do...

Thanks for reading,  I hope everyone's Christmas month isn't madness.

Time to Jump in the Pool?

I've never participated in a Kickstarter (KS) campaign.  I just don't get the concept; you give money to get something...probably.  I've heard all about the warnings and pitfalls, and successes as well.  I know that it usually works out.  I also am not a fan of the wait time for arrival:  paying to get  something in 6 months to a year...if it's on time.  But KS are certainly now 'a thing' and part of our hobby.  To be clear, I don't have anything against KS, it's just something that's never clicked with me.  Seems to me like a great way to perpetually spend money only to forget what you bought.  Until it arrives on your doorstep and you go "oh yeah, this thing!  Yay!"  Then you put the thing on the shelf where it stays for infinity.

There's also the horror stories of people having backed a successful KS and then a huge box arrives with a hundred or so unpainted miniatures!  You can hear the lead pile laughing at our futile efforts to reduce it's size and girth...

This matches my experiences with purchases of large numbers of miniatures at once, because it was 'a good deal.'  I've done this about 3 times in the past:  The first was a success;  I purchased about 200 miniatures of the Gripping Beast plastic dark ages miniatures (6 boxes at once!) and actually proceeded to paint most of them. Yes, I still have some sprues lying around but overall a success.  Of course, this set me up for complete failure the next two times.  For example; some years ago I purchased someone's Norman army project that he was abandoning; it was maybe about a quarter painted but a WHOLE LOT of bare metal and plastic.  The whole collection was probably over 150 miniatures and a mix of cavalry,  infantry, and archers (I forget the actual numbers now).  It was a good deal, expensive but good.  When it arrived I was thinking "now I have everything for my Norman army and time to do Battle of Hastings.  Right after some serious painting."

And I've barely touched them.  Sometimes I hear them calling at night.  Over a hundred tiny voices...

I don't browse the KS site, so when I do hear of a KS it's usually through a wargaming podcast or something posted on TMP or Lead Adventure.  I've also never been super tempted by anything that I have come across.

The first thing to catch my eye was a boardgame that does shield-wall combat. I love the dark ages and ranks of spears and shields bashing into each other.  It's called Battle Ravens by Dan Mersey. 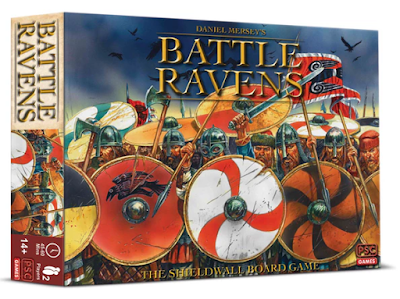 You can find the KS page HERE.

I won't go into all the game play stuff that you can see on the KS page, if you're interested enough to read it.  I ultimately decided not to back this project, as the game play seemed a little too simplistic for me, the more I looked at the I started to dislike the little paper soldiers, and the real deal killer was the English Pound to American Dollar exchange rate.  It made it too expensive for what it was.


I mention that KS just to tell you about the next one.  It's funny how these things happen in groups;  that being tempted by 1 KS makes it more likely that I'd be even MORE tempted into another.
That's probably a theory of psychology that I should know better. Sounds like 'Foot in the Door Technique' except that I did it to myself.

In a short period of time after Battle Ravens I stumbled onto this boardgame based on Antietam.. 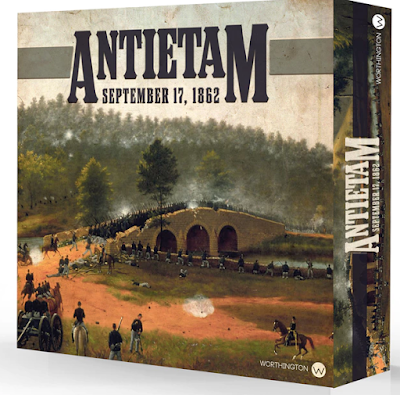 You can see the KS page HERE


This project I backed, and it seems like the perfect project to commit to for my first time.  Everyone knows I'm in love with the ACW, and of the ACW my favorite battle is Antietam.    So when it finally arrives sometime mid next year my excite will not have diminished.  The rules seem good and somewhat familiar to Fire and Fury, which means I'll probably like them.  It'll also serve as a good resource for my Brigade Fire and Fury scenario that I've been working on slowly.  And strangely I don't have any ACW boardgames besides Battlecry.

I think it's wise to use KS to invest in a boardgame, because it comes ready to play.  Too many times have I bought into a miniature project and not really taken into account the time it would take to assemble and paint the miniatures and terrain; therefore the project stalls.  Doomed to forever in storage or I sell it off.  Big piles of unpainted miniatures are intimidating and depressing to me.  just stuff that can't be used that takes up space and creates the expectation that I am not painting enough.

I'm seeing the whole thing as an experiment.  Will I be excited when the game arrives? Will I actually play it or will it just sit on the shelf? Will it even arrive? Will I go off the deep end and start to pledging to every KS that looks like a good time?  Will I have to start selling off possessions to fund my KS habit?


Only time will tell.

Thanks for reading along.  : )