In this post I build a 28mm (ish) Viking Longship.  All good Vikings need a longship.  Which means until now all my Vikings have been quite lame. 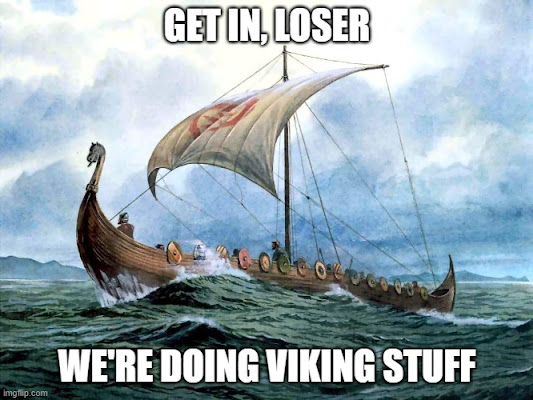 I'm stuck in the Dark Ages, but it's a good kind of stuck you know?  Like when something is stuck in your teeth but it tastes good.

I wanted to expand my dark ages collection but did not want to paint miniatures.  Painting miniatures is boooooring.  Decided to do something different and build this ship that I've had lying around for a few months.  It took way longer to do than expected; due to my lack of time and poor modelling skills.  The object is not to have the ship sail around carrying miniatures but to sit on a coast looking like a really cool piece of terrain.  A little Dark Ages scenery magic that will get some oohhs and ahhs and a maybe few Viking lady groupies.  The I can say something sexy like "Let me show you my Longship..."

Here is My Longship 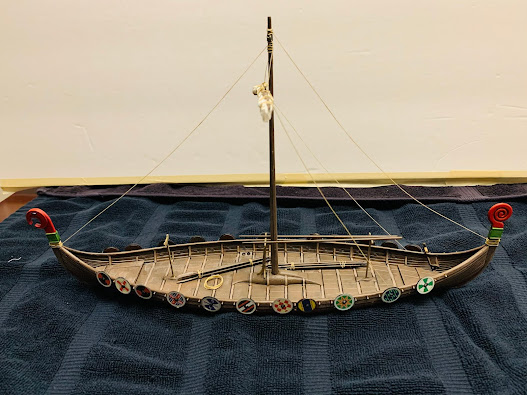 Now for fun, let's put a miniature on the deck so we can get some sense of scale...

On the whole, I am quite pleased how it turn out, which is why I spammed you with pictures.

I used the same Revell Viking ship model that everyone has.  This model is 1:50 and 28mm is close to 1:56 so it near enough in scale to the miniatures to make no big difference.
I'm pretty sure that Vikings did not climb up the mast and then go out along the yard to loosen the sail like on Napoleonic era ships; but rather had the yard stored down the center of the boat and when it came time, just raised to yard into place.  I originally tried to have the yard and sail stored lengthwise along the ship but I couldn't get it to fit, so up high it went.

Problems That I have Made Myself

Now that I am the proud owner of a Viking longship, I've come into some BIG problems.
1) I haven't quite figured out how to store the damn thing.
2) One longship does not a Viking fleet make; now I want one or two more.  This has lead to some internet shopping and comparisons.  Any suggestions are welcome before I buy something.
3) The biggest issue is that I currently don't have any suitable river bank / beach terrain for the awesome model to sit on.  This must be solved immediately otherwise my Vikings will continue to be quite lame because there's nowhere to put it on the table.  My Vikings can saaay they have a ship but no one will see it, just like in high school I had a girl friend in Canada.  I'd like something where the ship could appear to be partly on shore and partly in the water; like they just pulled up to do some raiding.
I freely admit that these aren't really-real problems.

I want to give a notice to those who are silly enough to waste their time by reading this blog regularly that updates will likely become more sporadic in the near future.  I have too many real world concerns that are coming to head and will require time and effort.  The biggest of which is I have to get serious about moving; unless I want son #3 (now 4 months old) to share my room forever.
Till Next time.
Posted by Stew at 12:40 PM 39 comments: