Me: "Doctor, I just feel like it's coming back after a long time away."

Me: "I've just been feeling so Dark lately."

Therapist: "Uh-huh, and how long does this last?"

Therapist: "It means that it's time to blog about the Dark Ages on that silly little miniature wargame blog of yours."

Therapist: "No problem.  Glad I could help.  That will be $500 for the session and I don't take insurance."

I'm sure most of us are aware of Little Wars TV the youtube channel.  Lots of vicarious fun going on there and a great presentation of what a miniature wargame club could be like (My favorite guy is Keith).   They also do a nice job of promoting 'the hobby' and have put out a FREE set of wargaming rules for the Dark Ages called Ravenfeast.  Billed as a simple wargame aimed at beginners.  Very admirable and the group deserves a lot of praise and support.  It's the first entity that I've seriously thought about supporting on Patreon.  I haven't; I got a family to support and a small drug habit that needs feeding.  But I've thought about it. 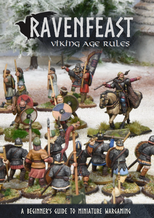 I also thought to myself,  "I love the Dark Ages, and I love new rules, and I haven't played a miniature wargame in months, and I'm so bored lately, and I stubbed my toe, and my hair has split ends, I need to have some fun, so why not give the rules a try out?"  Yes, I tend to think in run on sentences.

Escort the Priest to Victory

Ravenfeast comes with 3 scenarios and there are more online, but I still made up my own escort scenario just for fun-zees.  Here's an attempt at a dramatic backstory:
"King Alfred is moving his armies of Saxons against the Vikings lead by Guthrum.  A great battle will occur soon.  Several days journey from the armies a priest has a vision; If he carries the cross from his holy order of the Incredibly Nice Saint Augustus Nativity Ecclesiarch (or I.N.S.A.N.E) to the battlefield then God will surely grant victory over the heathen Vikings.  So he begins to walk without stopping and word travels ahead of his coming.  A Saxon Earl takes his men to provide an escort for safety and protection.  A Viking Jarl is dispatched to capture/kill/prevent the priest from fulfilling his quest and sets an ambush...."
Set Up: Use the exact same set up as the 'Back to the Boats' scenario in the rule book.
Forces: The Saxons are the Defenders and the Vikings are the Ambushers.  The Ambushers have about 200 more points than the Defenders (in hindsight I reduce this to 100 after playing it).  There are sample troops in the book which also provides the point structure so you can create your own unique profiles.  The forces I used were composed of:
I used the open point structure to create the Viking Hirdmen Archer; basically a slightly better archer with some armor, because I HAD THE MODELS and they LOOK COOL.
Objectives: The Saxon Defenders must escort the Priest safely across the table.  The Viking Ambushers must stop that from happening.
Victory:  The Saxons win a major victory if the Priest and at least one Earl or Earl's Champion exit the table (at which point they are somehow magically saved from further pursuit).  Minor Victory if only the Priest leaves the table.  Anything else and the Viking win.  Dirty Vikings.
Special: Add to the Saxon force the Priest who has the following profile and special traits:

RF uses a 4x4 table but I am lazy and didn't want to drag out the folding tables from the garage, so just used my dinner table which is around 3x3.  We'll get to the carnage faster that way. 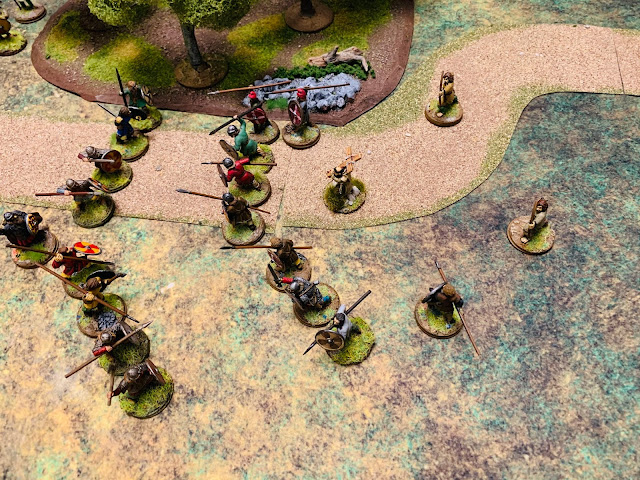 At this point I had to take a break in game due to the Great Interrupter (otherwise known the baby boy) needing a diaper change, a bottle, and 30 minutes of rocking before going back to sleep.
When I got back, I played two more turns and the Vikings killed the Priest mainly because the Saxons did not have enough men to block each Viking.

You don't really need a rule review for Ravenfeast.  The purchase of rule reviews is to give more information so that folks can decide to buy a set of rules or not, and these are free so no need for that!
Though here are some observations from my game play:
The rules are really well produced.  These look sooo professional and better than some rules that I've paid for.
The rules do exactly as intended; it's a simple fun rule set.  Us veteran wargamers might find them a little too simplistic (because we're all tactical geniuses right?!)  And there are some nice general hobby encouragement pieces.  It's very well written as well.
Other observations:
Miniatures are stuck in combat unless they do a disengage move which grants a free attack with no save, which seems strange to me.    I had several models that were stuck in place for several turns because no one could win a fight.
Morale tests happen at the end of a turn, and the rules are a little unclear if miniatures who are stuck in combat should take them.  Or maybe I'm just used to LOTR where miniatures are who are fighting are too busy to take morale tests.  I played it that models DID take morale tests and if they failed made a disengage move.
Rules don't say if a shield wall could be formed in rough terrain (Shield walls move at half speed and rough terrain is also have speed so would a shield wall in rough terrain be half half? I just played no shield walls in rough terrain.
The rules do mention that if a miniature is attacking over an obstacle it takes a negative modifier to it's melee stat.  This did come up in my game.  But it's unclear what happens when the miniatures get stuck in combat like I was describing.  Is one still considered the attacker?  When the Vikings charged the Saxons defending the fence, I gave the Vikings the negative; but if two models continued to fight over the fence I gave them both the negative.
Overall though, I had a nice evening messing about with my dark ages stuff.  Scratched an itche if you know what I mean.  Till next time.
Posted by Stew at 11:56 PM 24 comments:

Slyder House and Barn by Things From the Basement

As discussed earlier on the blog, hobbytime seems to come at a premium these days and there's precious little of it, so I've been focusing on some smaller projects in order to see progress.  Here I've completed some 15mm buildings.

Slyder House and Barn in 15mm

Awhile back a bought into the kickstarter by Things From The Basement for their 'Farms of Gettysburg' set.  Like a madman I went all in and got the complete set, and now I have all these 15mm barns and houses lying around.  As I haven't had experience with this company before; the first buildings were gonna be a an experiment.  I selected the Slyder House and Barn to start because in all my extensive knowledge of Gettysburg, I couldn't immediately recall if anything about the Slyder Farm or where it was.
I have my usual ambivalence with MDF kits.  I want it to be nice but I also don't want to put too much effort into it.  Kinda sums up my whole attitude toward life really.

I didn't take any WIP pics because there really isn't much to it.  Here's how the buildings came out:

The kits ARE very nice.  These 15mm buildings are just smaller versions of the 28mm ones, so come designed that you can take off the roof to place miniatures inside.  I'm not gonna be doing that for my ACW gaming so I just glued the roofs on in the end.  Also, you use the instructions for the 28mm kits and these show the assembly of windows and doors, but in the 15mm these are etched on or part of the model, you skip these steps. 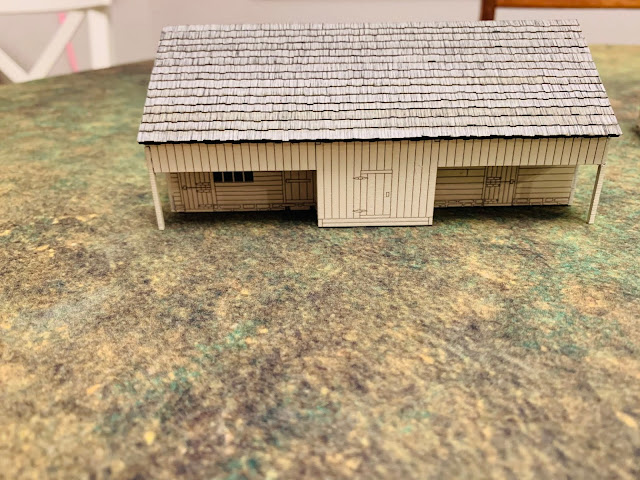 I spray painted the house and barn an off white.  If you do light passes from far away the etched details on the MDF remain so it preserves the wood planking effect.

On the inside of the windows I glued a piece of navy blue card stock just so they wouldn't be open holes gazing into the nothing inside.  I kinda like this idea.  I'm gonna do it to my own house so folks can't look inside and see how messy it is.  Madness or Brilliance? 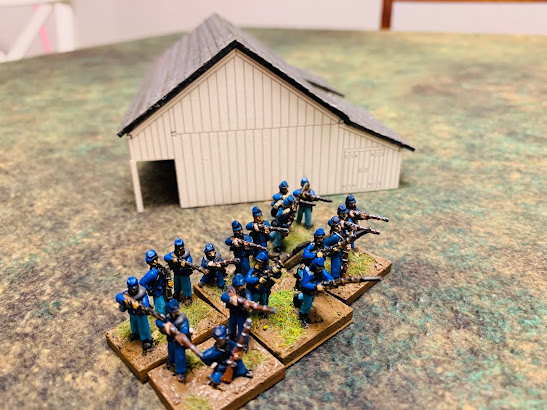 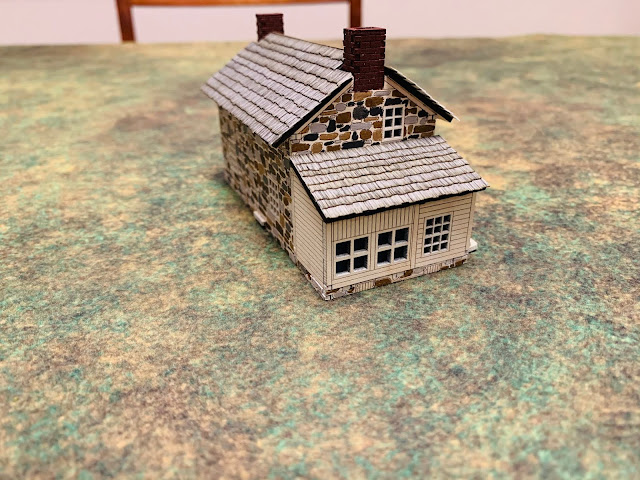 For the house, it was a simple matter of painting the chimney and all the stones in browns and greys. But it took fooorrreeevvveeer. 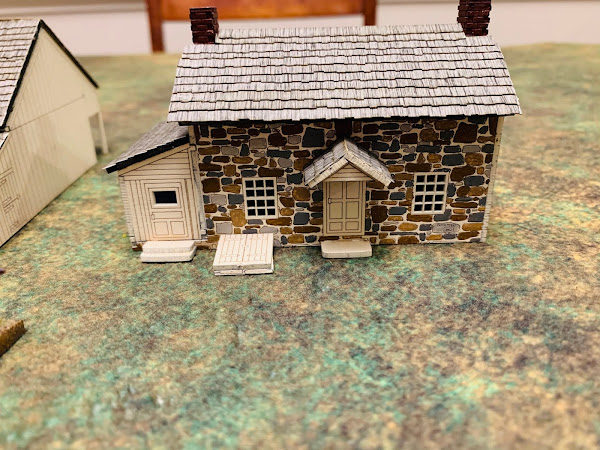 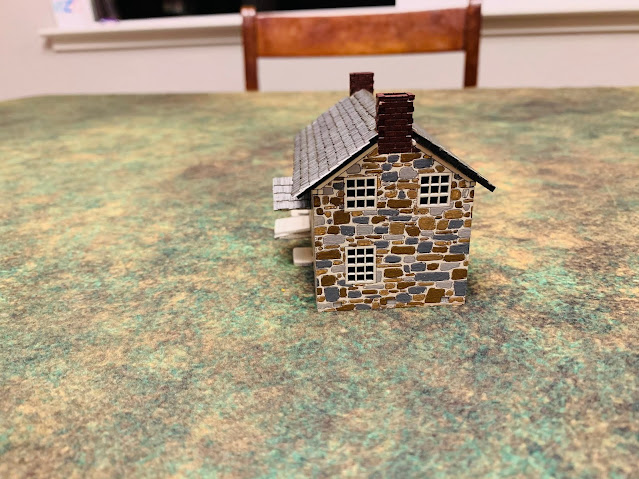 On the roofs I added some of those paper shingles that I like so much.  Which also took forever to do or maybe it was because I only got to work on these for about 15 mins at a time... 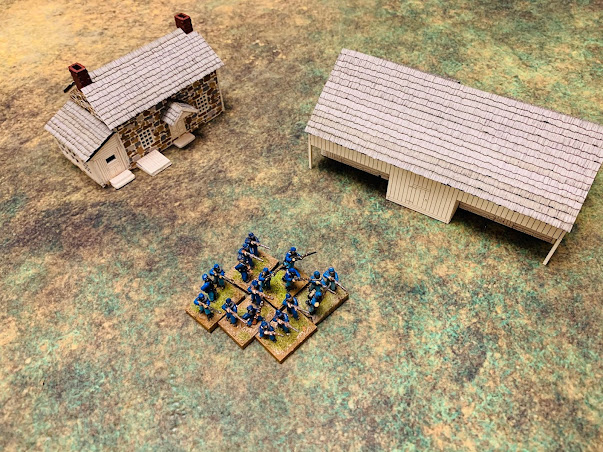 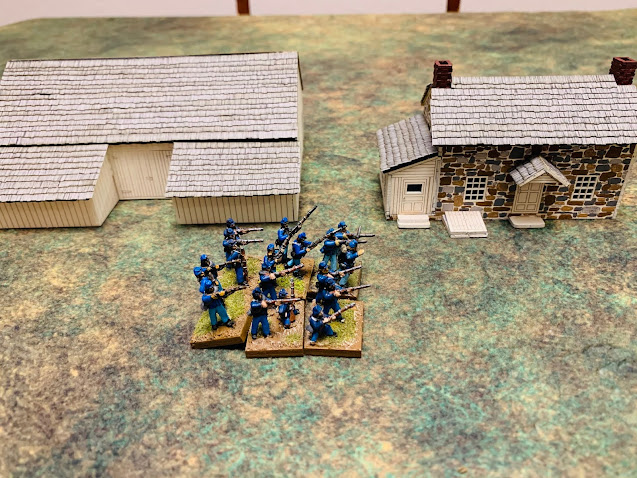 Overall I like how they came out.  I'm sure that someone with talent and time could really bring these MDF kits to life (I'm looking at you Ivor) but I did a good enough job for the gaming table.  It's one of terrain pieces that once it's surrounded by fields and fences it'll look even better.

While I was playing around with MDF, I decided to upgrade my hobby desk with a new paint rack.
With these buildings complete and off the hobby desk, and newly organized paints I'm ready for the next small project to bring to miniature gaming glory.  Just seeing where inspiration will take me.

On the Pandemic Front

I've now had my two shots and am all vaccinated.  I got them through work because I am an essential worker.  I don't feel all that essential but someone in the Government said I was.  My local area has even stepped down some of it's precautions and there's even talk of having a game convention in September.  That would be amazing.
Till next time.