After the marathon game of Post Captain last January I was reminded that there were more ships to paint.... and now they're finished!

What a story!  what a twist ending!  What an obvious conclusion!

Paint What You Want Play (Or Alternatively: The Stronger motivation)


In general, the best way to motivate painting is to play games.  I know for myself the more games played means the more painting done.  This is because I'm a 'paint to play' gamer.  I've never bought or painted a figure just cause I thought it was cool and be fun to paint.  Each figure is meant for the game table to be gamed with (no matter how long that may take...sometimes a looong while. lol).

After the Gaming Weekend (as posted in Jan) of AoS and ACW, while motivation was high for those genres some ACW infantry and  ships were placed on the paint table.  Speaking for myself, this is something that often happens, that the selection of hobby projects is influenced by what I played last.  However, sometimes momentum for these projects can sag when the mind starts to look forward to the next game.  I get some cognitive dissonance if I am painting for one genre while planning to play another.  I'm excited for the next thing and want to prepare for that.  I also think that this happens to a lot of wargamers, which is why so many miniature projects get half started or languish in varies stages of completion.  Wargamers get distracted by the next thing on the horizon and don't finish what they start.  because we are bad people.  No, it's that:


We are more motivated to paint for future games than from past ones.

Just something that I noticed.

So it took a little self discipline to finish these ships as I was thinking about other things, mainly Lord of the Rings, but more on that in a future post.  Try not to hold your breath in anticipation.  But I am glad that I stuck to it because now the fleet has grown by 2 more ships.  And I have that sense of completion of a project finished.  Cue the contented sigh.


Plus, I really like the way they came out.

First up, I present to you a French 80 gun Ship of the Line.  I've been needing one these for awhile.
This ship would represent the Bucentaure, which was the same design as the French Formidable, which is the French Admiral's Flagship in the Battle of Cape Ortegal Scenario.
The future scenario can be seen in a past blog post HERE.  (how was that for a mind bender?) 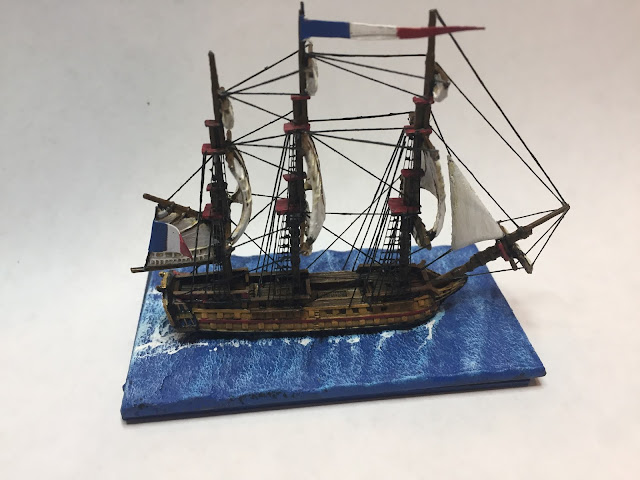 I think the more correct paint scheme for the Bucentaure would be just plain yellow sides, but honestly there is just so little info on how the ships were actually painted. It just doesn't seem to be a thing that mattered much.  I can kinda understand, as it's not like a ships color mattered in her identification.  And as I tend to use the ships interchangeably (unless it's a specific model of a famous ship), I tend to just go for nice looking paint schemes.

For this ship I added some Red on the gunwale and upper deck. 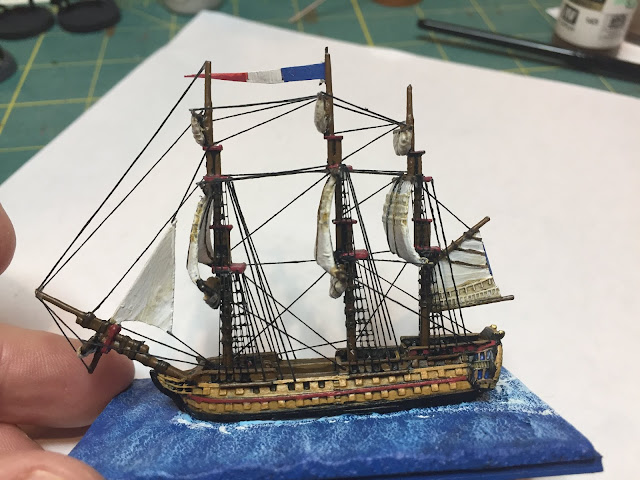 Adding to the numbers of the British, here is another 74 gun 3rd rate.  The backbone and work horse of any Napoleonic Age of Sail fleet. 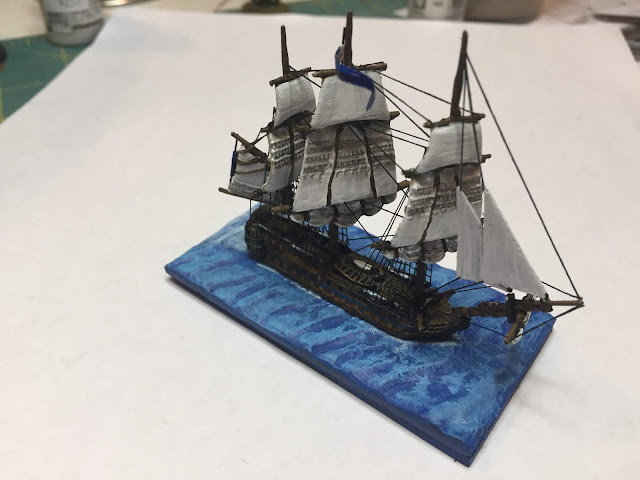 This ship was not made to model any ship in particular, just a generic 74. 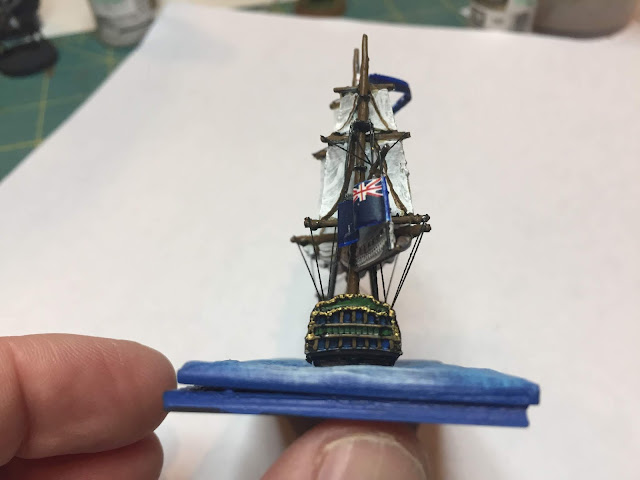 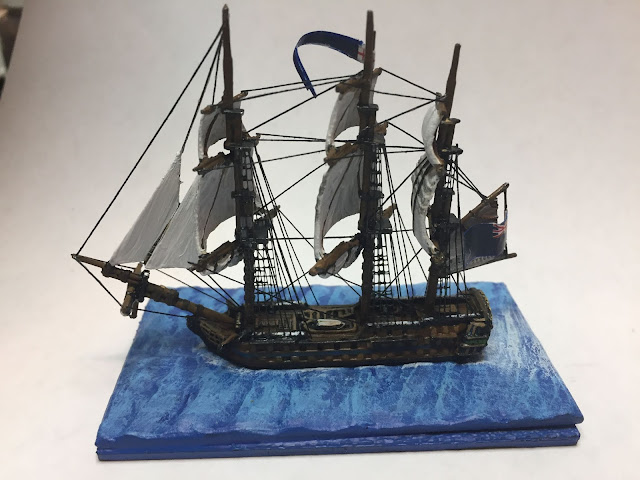 Now sail off to the world at large!  Or at least into the storage bin.


Last year's goal for AoS was to have 8 ships, and now that goal is reached albeit 3 months late.  There will certainly be more ships in the future.  For now, 4 ships a side is a good amount for a 4 player game using Post Captain (2 ships each).  Goal achieved!

Unlike my usual habit of being focuses on a few projects, lately I've been doing a little bit on several fronts at once.  This has left me feeling a little scattered and disorganized, and the current state of the hobby desk reflects this...

Time to organize!  Recent purchases have to found a home, paints put in the rack, game supplies back on the shelves, vacuum the floor to get all the little bits and pieces that have fallen like snowflakes before Son #2 (now almost a year old) finds them and puts them in his mouth.  Maybe a little soap and water to combat the smell.

As always, thanks for taking the time to read this blog.  Be back soon.

Recently I meet up with my friend Dai from Lost, Damned, and Stunted,  for a long over due catching up and game night.
We both had an itch for something Skirmish level and Dark Ages-ish, so I suggested Blood Eagle.

This is a rule set that came out in early 2016, and I bought it pretty quickly because I liked the idea of a Dark Ages Skirmish game.
3 Year Later it's time to dust it off the shelf for it's first game....  bout time.

Since I had the rules and the figures, I made up two army lists of 300 points from the Viking and Saxon options, and headed over to Dai's place.  He provided the terrain.  Blood Eagle (BE) plays on a small 3 x 3 table.

All Skirmish games need an narrative.  BE is very much a skirmish game.  About 10 figures a side, each figure can be unique...  fast furious combat.

In our first scenario, set during the time of that England was split between the Saxon Kingdom of Wessex and the Danelaw, a priest sets off from a Saxon Village to go convert the Viking heathens.
Obviously this will get him killed and/or martyred.

But he must be beloved somehow by the local Saxon Earl, I dunno, maybe the priest instructed his son in Latin or something. The Earl taps one of his Thegns, who brinks 2 Huscarls and some local militia types and they head off to retrieve the priest before the damn fool gets himself in trouble.

Of course, the Vikings across the way hear of this priest coming and preferring their own gods, heathens that they are, come to stop him through death or capture.  The Viking Jarl brings his champion and berserker, and some of his experienced warriors.


The game begins with the Priest in the middle of the board, and the two opposing warbands entering from the sides.  He will stay still until contacted base to base by someone and then will follow that person around (either as a hostage or a rescue).


With my leaders dead, and only a few warriors left alive, the dirty Vikings make off with the Priest.
Who knows what fate now awaits him?  I wouldn't want to be him for sure...

With time for another game, We set up another quick scenario using the same lists: this time the Saxons are defending the house full of women and children and other riches from some terrifying Viking raiders.


the Viking win if they get 3 models inside the house, or kill all of the Saxon warband making it impossible to be stopped.


Which they did.
and quickly too, it was a short game and I only managed to take that one picture.


Overall, it was a fun night and it was great to see my friend Dai again, get in a game night, and eat some really bad gluten free pizza.  But I was hungry so I ate it anyways.


But What Did You Think About the Game?  Thoughts on Blood Eagle

The game played well.  It comes in as enjoyable as Lion Rampant, and is kinda that scale.  I liked it better than Saga just because we had all the rules figured out in 10 mins. though the game is not particularly deep.  The decisions are mostly about which figure to activate first and the tactics therein.  There are some things that become more apparent after playing.  I used my Saxons all wrong: I should of used my lesser quality troops as 'a mob' to take down the more skilled and better armored Vikings.  The games are kinda bloody and fast, it's one of those games that you play twice in an evening.

Shooting is kinda useless unless you specifically kit out a figure's stats to make them really good at it.  I actually like this, as I don't want my games of Dark Ages combat to be about some joker with a bow.  It is kinda weird that you would almost always arm your guys with spears because in the rules they're better than swords.  But hey, really the ideal way to create a warband would be to pick out some of your coolest looking miniatures and stat them out as you see fit.

The game comes complete with many scenario ideas and army lists, and what I really like is that the book lays out the complete point system so you can make up just about anything.

Till next time, hope to be back soon.