What’s an ACW battlefield without a cornfield or two?  I’ll tell you what it is….BORING!
Actually, one day I’m going to do some wargaming around one of my favorite ACW battles, the battle of Antietam.  The battle voted most likely to be mispronounced.  So naturally I would need a cornfield.

This is one of those situation where one is trying to balance 3 things; aesthetics, playability, and budget.
You can spend a lot of money for really nice corn, but to get a field of any decent size this starts to become really expensive.

So looking around the internet for ideas, I found that people were using Christmas pine stems for their cornfields, so I decided to give it a try.  Here is a tutorial; which is simply the way that I did it copied from others.  I’m not sure who did it first, but that person had an ah-Maize- ing idea.   Ok, I’m sorry for that corny joke.    Oh man, they just keep coming.

Step 1!  Buy some pine stems.  I got these off of Ebay.  I found some in two sizes, 15mm and 12mm.  I think the 12mm looks better for my 18mm ACW figures.  You will need LOTS.  I like these ones shown here as they have green and brown in them. 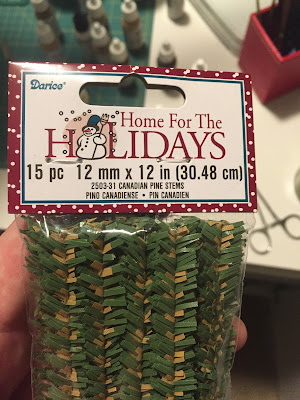 Step2!   Take some wire cutters (scissors won’t do as the center of the stem is made of wire) and cut the stems to the length desire.  I went with about an inch but I also varied it some to create…variance… in the corn stalks (didn’t want them to be too uniform height).  You will need to do this LOTS.  It is most tedious.  Also, you will get the little pieces of plastic fletching falling off making a small mess.

And if you’re like me and have delicate little girl hands, this can start to hurt after doing it a hundred times. 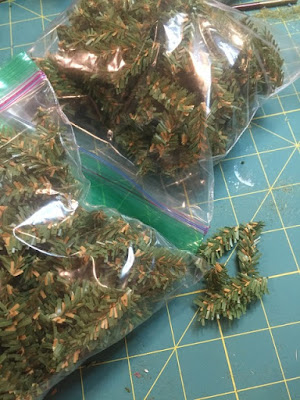 Step3!  Prepare the bases!  Now this is the place where I diverted from others and put my own spin on the process.  Most people do this on square bases because, you know, the fields are square.  However I went with round bases as I am an original thinker and dare to be different.

Actually, I went with round bases as I thought it would be easier to model irregular shaped fields.  I also think that it’s easier / looks better that when troops move through the fields to place the batches of corn stands around the troops.  Troops on square bases moving in square based corn stands just look a little too artificial, like the troops have to move in just the right way, basically at 90 degrees.

I used 50mm circles bought from Litko, the same 3mm thickness as my ACW bases.

I was also persuaded to skip the step of adding ground texture to the bases, as it would be extra work for little payoff.  I dunno about that in hindsight but too late now.

To break down step 3 into smaller steps;
3a!  Cover in ground texture or not…
3b!  Create a pattern of where you want the corn “stalks” to be.  Even back in those ACW days corn was planted in rows, lay out how many rows you want per base depending on how thick you want it to be.    Because of the circle base I went with a 3-4-4-3  pattern.  That’s 14 stalks per base (see above comment about needing LOTS of stalks).   I cut out a piece of cereal box in a 50mm shape, and cut the holes in it, and then used a Sharpe pen to mark the holes in the wood. 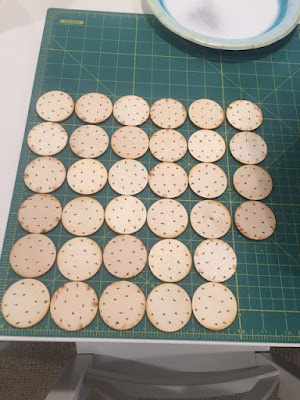 3c!  odds are, if you are bothering to read this, you are a MAN-ly wargamer.  So  get thee to your manly tool area for your power drill (do you remember that TV show with Tim Allen with all the power tools, that was funny),  and skillfully drill all the holes.  Just drill all the way through the wood.  Naturally use a small bit.
3d! Paint the bases.  Award yourself 5 extra ‘awesome wargamer’ points if the color you use compliments the material that you’ll use to outline the borders of the field.

For example, I am using the Lemax Moss matt, that you can get right now at Michaels, actually.   This is the thing they use to base those cute Halloween villages.   I just like the way it looks on the wargame mat.

I used spray paint, and had to try a few different colors before settling on Nutmeg.

Step4! Plant corn.  Feel free to listen to a banjo or country music or something while doing this if you think it’ll improve the experience.  To plant the stalk, just pull off some of the lower ‘leaves,’ dip in glue, and stick in the hole in the wood.  There’s likely a dirty joke in that sentence somewhere. 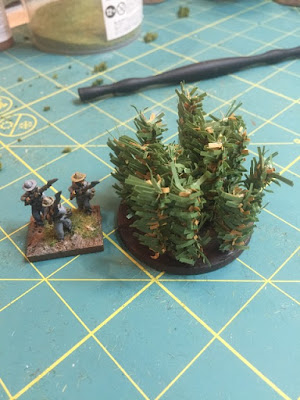 So the assemble the cornfield, you cut the field material into the shape you want, and cover it with cornstalk bases until it starts to look like a field.  Add fences and what have you…. 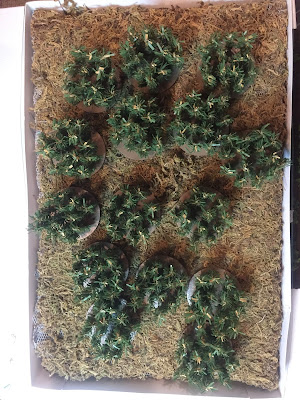 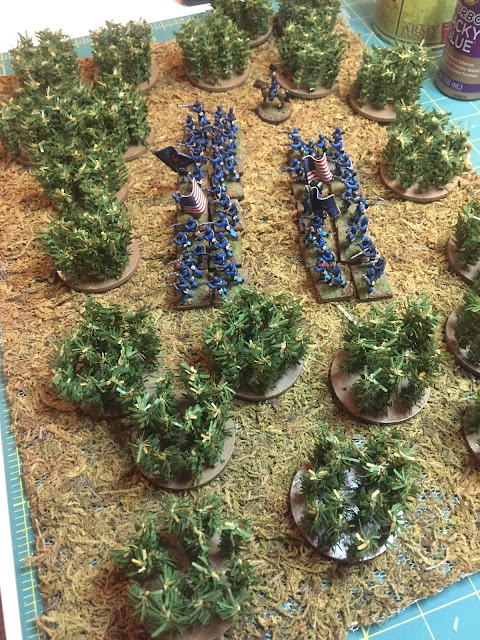 It’ll look more like a dense cornfield with more bases.  This is somewhat a labor intensive project, as you will need LOTS.  But I think the effort will be worth it to bring just a little more terrain to the ACW battlefields. 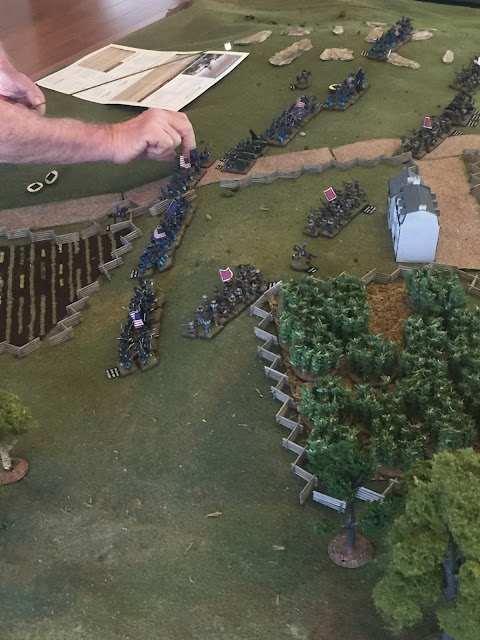 Hope that someone will find this useful.
Posted by Stew at 7:02 PM