This post will cause a sense of Deja Vu for the regular readers.    Which I'm always surprised that I have.  You can probably just skim down to the bottom.

Continuing on from the last post, I've made some more dark age themed counter tokens.
There are now around 50 of these things, and that SHOULD be enough to fit all of my purposes.
For more Deja Vu sensation; I've also made more dice holders for the 5mm dice.

I think I have supplies enough to make around 50 of these as well.  But I'd like to try them out in an actual game first just to see if they aren't too faddily to actually use.

Continuing on with the grinding out of the big battle bases.  Here are 4 more of the 10 man bases with Anglo Saxons on them.  Yay! 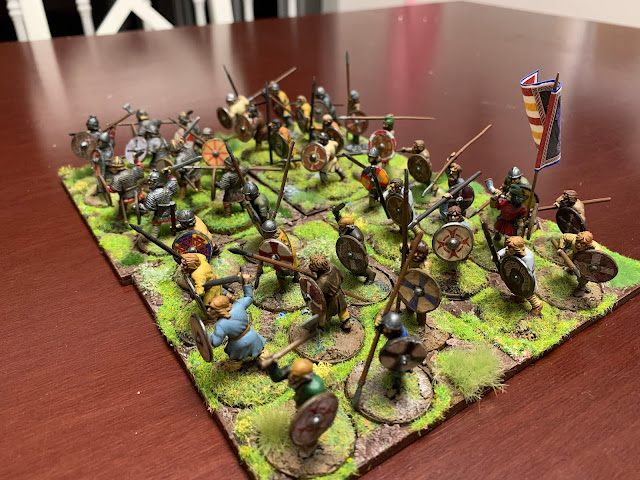 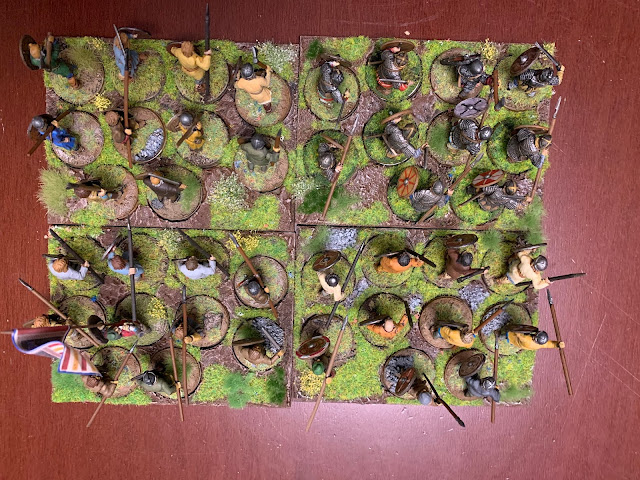 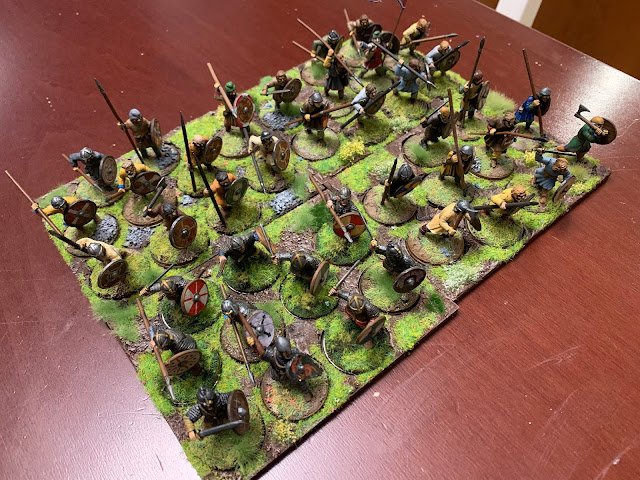 No wait... these are new-never-seen before.

I didn't mean to make these.  I just ran out of suitable weapons for the counters and had 4 little bases left over with nothing to put on them. 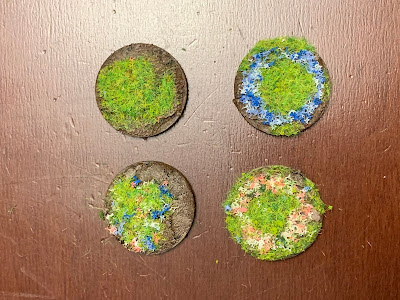 Two Objective markers  I decided to make into "fairy rings" because when I had the idea; I liked in theory but I'm not so sure it came off in practice.   But in any case they'll do to mark an area of ground that needs to be fought over while not getting in the way.  Lots of games require such markers.

We've talked before about Hubby Points.  Sometimes called $Hubby bucks$.  These are the things you earn by being a good husband and father that you store up and spend to go play games later on and ignore your wife and children.  I just spent all mine on my recent game weekend so am in dire need of some more.  Every man earns them differently; I mainly get hubby points by doing the dishes, folding clothes, watching Jane Austen movies, and vacuuming the floor without being asked.  Flowers help too.  When you have a baby like I do there are extra opportunities to earn points by changing especially stinky overburdened diapers.
My wife is also the Girl Scout troop leader of daughter #1.  When she had the idea that a fun Girl Scout meeting would consist of racing mini-donuts down a track of some sort but then despaired of not having such a track; I capitalized on the opportunity to earn BUCCO Hubby Points by offering to build it.
Then naturally put it off till the last minute.  But a promise is a promise and a promise to your spouse is more like sacred oath that if broken will call down the gods of vengeance.
I made two.  One 'race track' down a long slope and one 'skill track' where the girls could try to aim the donuts going the slope into target holes.
These weren't anything that had to be permanent so I made these out Foamboard that I got from the dollar store and a hot glue gun.  Spray painted blue with some painted details.

(These pics were from the iphone movie so aren't the best, but you get the idea.)
Afterwards the girls get to eat the donuts.
Protip: Powdered donuts make great racers.
Like a lot of things in life about half way through these projects I realized how I could of done it better but it was too late to start over.   Just like my life overall.
Thanks for reading.  Comments greatly appreciated.  Till next time.
Posted by Stew at 8:25 AM 29 comments:

B to B and BBB

Stands for:  Back to Blogging and Belated Blog Birthday.

Back on the Interwebs

Hello All.  I've been absent from the internet / blogosphere for about a month.  Just had a lot going on with the family and Work.  Not all bad but not all good either but that's the way it goes (says this stoic individual resigned to his fate).   As some of you know, I do most of my blog writing while at work because I have built in time where I basically just sit around and 'be available.'  But lately I've needed to actually earn my money.  What kind of world is this??? 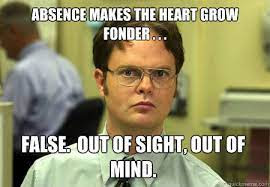 There was also about a 3.5 week period where I didn't have a cellphone.  It was TOTURE.  I actually had to look at my children and wife while they were talking me.  And since my cellphone is the primary way I view blogs and leave comments, I haven't been doing any of that.  So IF you missed my stupid inane comments on your blog posts that's the reason, and it's definitely not that I was mad at you and giving you the silent treatment out of jealously because your miniatures hobby is cooler than mine.
(Ok, maybe it was a little of that)
I got my cell back and have started leaving comments again.  I'm working my way up my blogroll.
I did have email access while at work and limited access to our laptop while at home; I say limited because during that time the wife was also working on two very big projects and needed to computer for important stuff.  It didn't feel right for me to hog it in order to gossip about toy soldiers.
And while I am fessing up to being a bad blogger, I'll add in that the blog birthday came and went and I didn't even notice.  4 years of A Terrible Loss.  Time flies and we all get older (cue the Landslide song).

(Felt like saying 'Hobby Progress' in Italian, not sure why but it adds a little je ne sais quoi (and now French!  This blog is SOOOOO internacional!))
Even with all the stuff going on I managed in squeeze in some hobby times for the sake of relaxation and downtime.  It was weird doing hobbies without a cellphone as I usually play a youtube vid/podcast/audiobook while doing stuff and so it seemed eerily quiet.  Also, I didn't have a good way of taking pictures.   Not that there is a lot to photograph...

I really like the rules  Clash of Spears but it needs a lot of tokens.  As I like my games to be at least as pretty as I am (a low bar) I wanted some fancy-smancy tokens that will look good on the table. 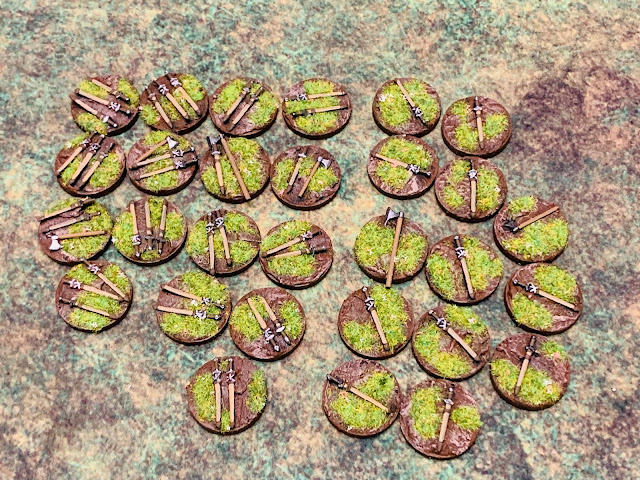 These are just 25mm bases with some ground texture; I tried to make them plain enough so that it's easy to see the swords and stuff as that's the important part.  The weapons are mostly from the Gripping Beast boxes of plastic dark ages infantry  types and there's more where that came from.  Proof that you NEVER throw sprues away because I've had these lying around for years.
I dislike dice on the table.  Problem is; dice are very useful for tracking things in wargames.  Especially if the number is gonna be a number 1-6 which it is soooooooo much of the time (it's like wargame rule writers KNOW we have oodles of D6s).  So if I must have dice on the table then let's try to disguise them a little bit.  The idea being that when you look for the die you can see it but otherwise it blends in.
These are small 5mm dice and frames that I got from Minibits placed on a 25mm base.  I might of gone too small, but larger dice still screamed "THERE'S DICE ON THE TABLE HERE!" to me.
This is enough markers for a 2 player game.  I'd like to increase the number for a 4 player game, and it occurred to me that these markers will have uses in Mass Battle games as well.  For example; units in Hail Caesar can take up to 6 hits and can become disordered.

I continue upgrading my mass battle trays.  I completed 6 more of the 10 man trays.
That's 10 bases done so far.  I'm guess-ta-mating that there's likely enough Saxons for about 8more bases.   And then there are the Vikings still to do.  I'll be making bases for awhile it seems.  Good thing I enjoy it and it's a nice break from painting miniatures.

(I actually took 4 years of German in high school.  So naturally all I remember now are the cuss words and phrases from WWII movies.)
Here in the USA it was Labor Day Weekend recently.  For awhile there I was planning on attending my first game convention since the pandemic hit called Pacificon held over the same holiday weekend.  I ended up not going due to 'reasons.'   Instead, my local friend CG and I got together for a gaming weekend on our own which worked out quite nicely.  Goofed off all day Saturday and most of Sunday.
On Saturday, I hosted an ACW game of Regimental Fire and Fury.  We did the Battle of Stones River scenario in the RFF book.  It's basically a big CSA assault onto a Union line.  There were 4 players including me. 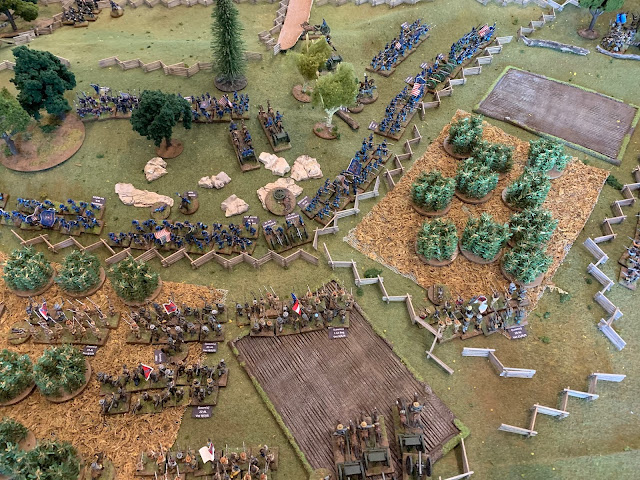 I was busy hosting, playing, eating, socializing, and sneaking off to the bathroom to do bumps of cocaine.  As a result, I only took those 4 pics.  4 pics over a 6 hour game.
The rest of the weekend was spent playing board games of various sizes and shapes with people that CG knew.  Apparently; when your children are all grown up you get time to play board games on the regular.  That's nice to know!

A bit About Board Games

I like board games, and it's something I don't do very often so it was nice to scratch that itch.  And I like board games that are moderately complex and take awhile to play.  I didn't take any pics because as a rule pics of board games are BORING to look at (Exception to the rule: Norm's blog).   Yet by the end of Sunday afternoon I was definitely 'boardgamed-OUT.'  We were starting a game called Viticulture (a worker placement game where you make wines, and it's a pretty good game)  when the depressive side of my brain rudely  engaged itself stating 'You're gonna spend 3 hours playing this game, you're gonna figure out the engine but probably 3 turns too late to win, and even if you like the game you're not gonna buy it and you're probably never gonna play it again and even if you do it's gonna be years later and you'll not remember sooooooo why are you doing this?"
I drowned that voice in iced coffee and had fun anyway.  I think I was just getting tired of learning new games.  It's like I want to play new games, but also want to play games that I already know I like and know how to play.  And the wife says I am hard to please.

Also, My Wife is Awesome

Because not only did she watch the 3 surviving kids while I was off playing games; but on Saturday morning at the last minute we lost our gaming venue, and the wife immediately said we could play at our house.  She also speed cleaned it as we headed over there (I mean the house was clean, but wasn't 'guest clean') and THEN took the kids out of the house for most of the day so they wouldn't underfoot.
Freaking Awesome.  I should buy her something nice.  Maybe she'll like a board game about making wines?

That's it!  I hope you enjoyed this post about... nothing really.  Some pics, some jokes, some half formed thoughts.  Probably what you expected!
Till next time hopefully not as long.
-Stewart
Posted by Stew at 8:36 AM 26 comments: