From Single to Mass Battle

Welcome!  Here for you I have a long post to say something simple.

But first remember back when you used to watch The Muppet Show and the announcer would say in a big voice "Piiiiigs... In.....Spaaaaaace!"  Got that in your head?  Good, now read the title..

See, that was fun.
Now let's talk about evolving basing needs and half solutions and failed experiments.  Especially when it comes to my dark ages collection.  The collection started out small, then grew as all collections seem to, and basing and storage needs changed as it increased.   It's one of my oldest collections and it's mutations over time demonstrates me going from a novice gamer to the excellent-blogging-all-knowing-war-god you know today.

At First, There was Singles

I started getting into Dark Ages gaming when SAGA came out.  It's a skirmish game so naturally all the miniatures where based in singles.  The warbands were sold in boxes of  Gripping Beast Miniatures with the Renedra plastic bases all included so it was one stop shopping and soooo convenient.
Now when the entire collection could fit in a shoe box, storage really wasn't an issue but as the collection grew to include lots of Saxons, Vikings, and then Normans it started to get messy.  Especially if I transported said shoe box.  As I drove to the destination with the shoe box on the passenger seat next me I would hear the miniatures sliding all around and colliding into each other.  Didn't help that I have a habit of driving fast and stropping quick while rocking out to Brittney Spears.

Then I feel in Love with Magnets

Because I never liked battlefoam type storage.  It has it's uses for big miniatures like ring Wraiths on fellbeasts but mostly battlefoam is only good for lining the floor of some small caged animal.
Magnetized storage however, is awesome and sexy.  And secure.  But it takes some practice to get right.
The plan: Put some metal on the bottom of the bases so that they can be stored and safely transported in plastic storage container lined with a magnet.  When you have too many miniatures for the tub, just get a bigger one.
For infantry, I discovered that fender washers are magnetic and roughly the same size as the 25mm base.  So I started gluing washers to the bases of all the infantry.  Worked like a treat!  I continued the practice for all new recruits into the Dark Ages Collection.

And Then There was Trouble

(If you have children; the phrase 'and then there was trouble' will instantly trigger flashbacks to watching endless Thomas the Train episodes.  I should of included a trigger warning, but hey, reading blogs is a dangerous pastime.)
As the collection went from 1vs1 skirmish (2 player games), to 2vs2 (4 player games) to Large Skirmish, to mass battle and now reaching multiple player mass battle (that progression is called the "collection evolution" by the way),  it became time to invest in some movement trays to create elements.  While trying out several different rulesets I came to prefer those that use static elements versus those that remove figures as casualties.
First stop: Sabot trays from Litko
I had two issues with these: one minor and one major.
Minor Issue: I didn't like the look of it.  It's tooooo neat with the dark ages warriors lined up in orderly ranks like they are soldiers in a horse and musket battle.  I know NOW you can buy these in all manner of configurations, but back then there wasn't as much abundance of choice and I didn't see any I really liked.  And then I had the Major Issue.
Major Issue: Fender Washers are actually just a touch BIGGER than 25mm, which means they didn't fit in the movement tray well.  Or at all.
So in order to get the miniatuers inside the tray I had to take a dremel and sand out the inside of the hole to  enlarge it by about a millimeter or so.  This process was 1) Hard (because I am clumsy) 2) Messy 3) imprecise; so some holes ended up being much bigger than needed and 4) A Pain in the Ass; so I stopped about a quarter of the way through.  There had to be a better way.

A Better Way (Kinda Sorta, More like an Adequate Way)

The solution I came up with was to purchase different movement trays: and because I can rock out with my cock out I went with METAL.
These metal movement trays I purchased from Shogun Miniatures.  Great company, I still buy my magnet bases from them.  It's a steel tray with a sheet magnet on the inside to hold the miniatures.
I settled on a unit size of 5x3 inches, with around 12 miniatures arranged in various ways.  I liked it because I could avoid neat orderly ranks and just have masses of men.  I used these for a couple of years. 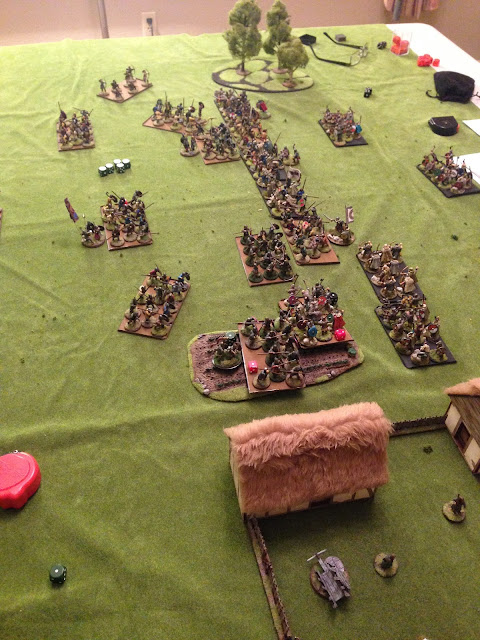 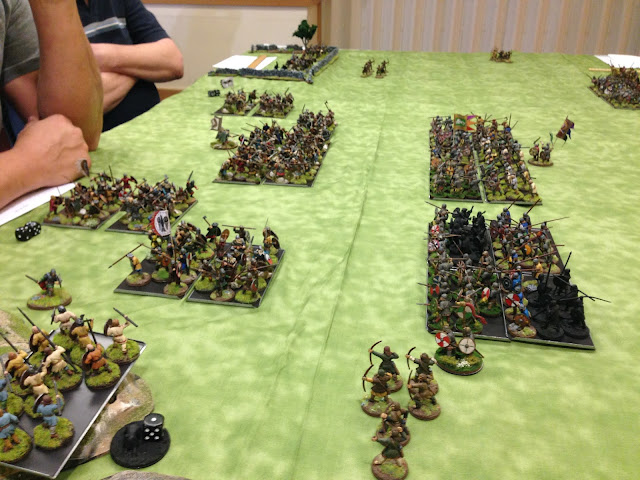 Though metal also had it's drawbacks.  Over time I started to dislike the empty / bare spots of the tray where miniatures weren't standing.  But the biggest drawback was that the metal trays were actually hard to handle during a game.  They're hard to pick up and move around, they are very heavy, and there's not a good place to get purchase with my weak slender fingers while other gamer's fat fingers couldn't grip the thin sides.  One often had to use two hands to move the tray.
But as I didn't know of a good alternative and I had already invested so much energy and money into the metal trays I stuck with it like a bad marriage.   Either that or rebase everything.

Saved by the British

One day long ago,  I was playing a dark ages game and I forgot my metal trays, so the guy I was playing offered to use his movement trays and picked up a miniature to place in his sabot tray.  I was in the process of making a dirty joke about my 'base having too much girth for his small hole'...
when it fit perfectly.
I was... shocked and surprised.
I squinted my eyes and asked "wheeeeerrree did you get that movement tray please?"  Because even while shocked and surprised I still remember my manners.
"These are from the UK."  he replied.   "From the UK says you; good to know says I," I said suddenly talking like a pirate for no reason.
Fast forward 5 or 6 years while I got distracted by the ACW, the Age of Sail, and having too many children.  Here we are in the present day and I'm thinking about movement trays again.  After some internet research I have learned a critical piece of information:
That a Fender Washer is the same size as a 2p coin from the UK (26mm).
I'm assuming the P stands for Pence but could mean Polliwog for all I know.  I've never been to the UK.
I can buy movement trays from the UK and not have to rebase my dark ages collection.  HA-HA! TAKE THAT SUCKERS!  (I'm not sure who the suckers would be in this case).
As an experiment**  I ordered some 'Loose Order' movement trays from Charlie Foxtrot Models (and got excellent customer service by the way) because I liked the look of them and he actually gives the measurement of the hole as 26.3mm so I knew my miniatures would fit.
knocked one together and got this:
Liking it so far I was motivated to put together a few more: 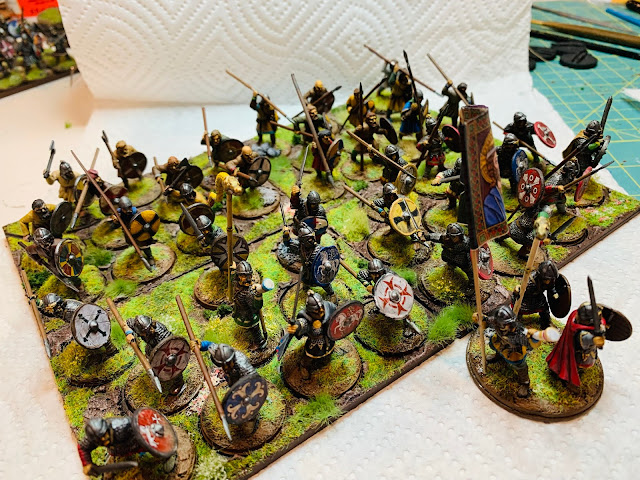 Veeeeeery niiiiice.  I am pleased.  Exactly what I was looking for and I feel a new life coming on for mass battles in the dark ages.  I can make out the ranks on the trays but the ranks are not neat and orderly and the 'mass of men' effect is present.  The ground cover works well to blend in the miniatures.  But most important of all is that the trays are easy to pick up and handle.
** It's great it worked out because I lied earlier.  I didn't experiment but GAMBLED.  An experiment sounds like I ordered just a few trays to see how they would turn out, but what I actually did was order 48 of them and hoped that I would love them.  I imagine I felt very similar to when men order mail order brides.
When all is completed, it will give me enough for 2 armies of 24 elements each and that ought to do it.

Here We Are,  At the End

That was long post to say a simple thing of "I ordered some movement trays and I like them."
But where else but a blog can you get the exciting backstory and context?  And wasn't it exciting.
I tried to make it an interesting story.
Thanks for reading it.  Or skimming it.  Or just looking at the pictures.
Thanks more for leaving a comment.  I really appreciate it.
Posted by Stew at 8:49 AM 31 comments: