But we'll leave the post up just to prove that I am a computer dummy.

And Then There Was Trouble...

Hi all!
For some reason unknown to me, lately I am having trouble leaving comments on people's blogs.  I blame Mike, because it start happening after I read his blog post on having trouble with blogger, so obviously he infected me.
When I view a blog on my iPhone, where the comment section usually is I see this:
Now I am already am signed into google, but whatever.
When I punch the button, the page reloads but nothing changes.
Lame.
I dunno what changed.  But it's frustrating.
My laptop still works fine, but I do 95% of my blog reading and comment writing on my phone, because I don't have a life where I can sit down in front of the laptop.
If anyone has an idea how to fix this, I'm all ears.
Till I can get it resolved, I might not be leaving comments regularly on your fabulous blogs for awhile (and they'll probably be the better for it).
Posted by Stew at 8:16 AM 30 comments:

Cue up the Bon Jovi song...

"I gotta hoooold on, to the simple plan I wrought,
It doesn't even matter those new miniatures I bought.
I got 50 done, and that's a lot (or not).
I'll give it a shot!
Whooaaah, I'm Half Way there,
WhooAAAH, Painting on a prayer!
Brush in Hand, I'll make it I swear
WhooAAH, Painting on a prayer!
Paaaaiiiinting ooonnn a praaaayyyerrrr.
(doh doh doh)
That song came out in 1986.  Even I was young back then...
(Song was "Living on Prayer."  I'm sure you figured it out by my typing-singing).

Hey look at that, it's only April and I've managed to paint up 50 miniatures out of the 100 planned.  Which is kinda amazing for me for I am not known for being a speedy painter nor someone who enjoys painting in general.

Or maybe painting miniatures to an acceptable tabletop standard isn't all that hard and I should just get over myself.  And its still gonna be October / another 4 months to finish all 100 at this rate of production. Not that impressive.

Anyway, I finished up another batch of 11 miniatures to make an even 50.  Mostly Saxon Thegns this time around.

As 11 miniatures didn't feel like a big batch to paint (oh how things change over time.  I used to think it was), at the same time I did up some more of the Big Battle Bases so that more newly painted miniatures will have somewhere to go.  It's a bonus job.

Piles of MDF and Shame

I mentioned in a previous post that I learned that the company 4Ground was going out of business this year; and since all my dark ages buildings are from 4Ground I thought I might pick up a few more while I still could. So that they all match and look consistent.
No sooner then after I hit publish on the blog post did I travel over to Noble Knight games and check out what 4ground stuff they had... 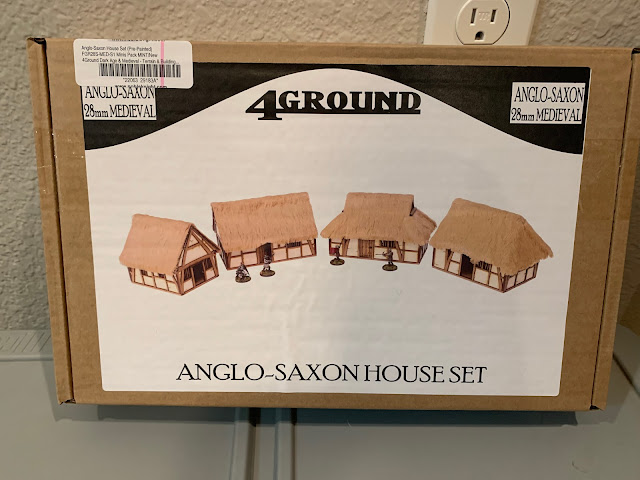 This arrived the other day.  My wife told me that I had "a fun package from a gaming company" without the 'what did you order THIS TIME?' vibe.  So that must mean that I do a good job at intercepting and hiding the mail.
Truth be told she never gives me that vibe.  She gets fun stuff in the mail too and we generally show each other so we can make ooh and awe sounds at each other's hobby  stuff.
I have no idea when I'll get around to actually putting those dark ages houses together.  Sometimes this hobby is strange; in that we spend our hard earned money on items that are just gonna sit around in boxes being useless.  Taking food from out of my children's mouths just for the possibility  of having it in the future.
And I've done it SEVERAL TIMES.
On the bright side; if the power goes out for an extended time I have plenty of firewood.  Course that means that I'll have to buy more MDF kits.   Course the power went out in the first place because I probably bought MDF kits instead of paying PG&E.  Kinda a viscous cycle.

Bye!
Till next time.  Happy Easter.  I'll spending the rest of the week making a track out of cardboard and duct tape so we can do our traditional Easter Egg race down the stairs.
Posted by Stew at 8:50 AM 23 comments: