The Viking Shore Part 2 - The Shore

I shall reward your patience with lots of pictures.  Every blog reader likes pictures.

In the last post, I built a Viking Longship  and remarked that I had no coast or river bank to put it on.  So after all that work, the Vikings remained quite lame.  "We have a ship, I PROM-mise."

In this post, I solve that problem by building some edge-of-the-waterfront terrain.  This was an ambitious project mainly for 2 reasons;

1: I really don't know what I am doing; I just copy others off the internet.

2: Since my hobby time has been squished to the wee hours of the night and only one special nights, perhaps it was the wrong time to take on a large terrain project.

But I do enjoy making terrain;  especially when it comes out looking half decent.  I suppose I could of posted WIP shots along the way instead of leaving the blog silent; but I wanted it all in one post for the sake of completeness.  Also, I had a really bad paper cut that prevented typing.

I wasn't so much going for a beach but more for a the bank of some large navigable river.  I know I called this series of posts "The Viking Shore' and that implies a beach but I don't like the beach.  It's sandy, the water is freezing, the air is hot, and I sunburn easily.

Where do trout keep their money? In the River Bank of course. 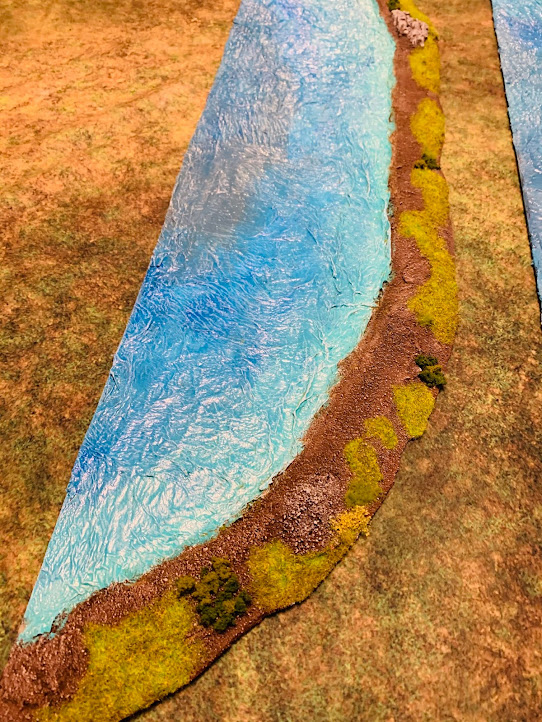 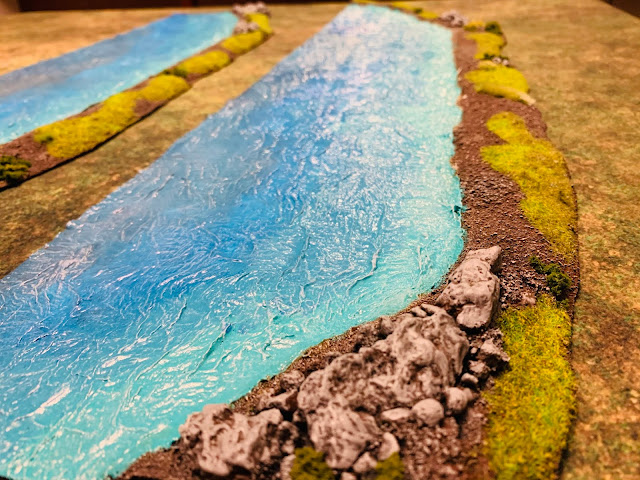 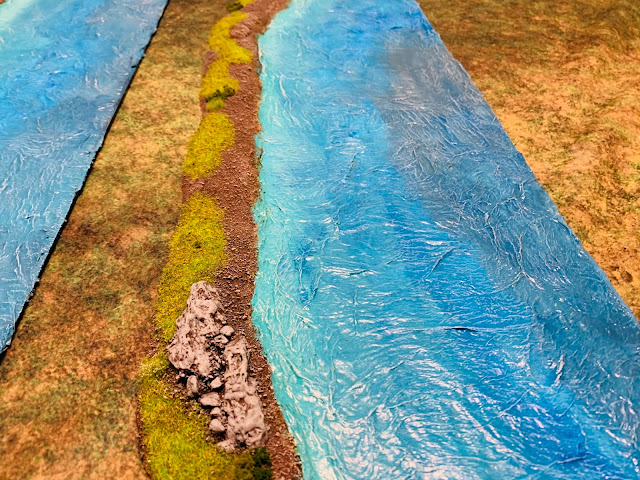 I made two of these so that one can be used on a smaller skirmish table or both together on a larger table.

As mentioned, the WHOLE POINT of making the river bank is really just have a place for the Longship to sit on the table to attract Lady Viking groupies.  Let's see how that turned out: 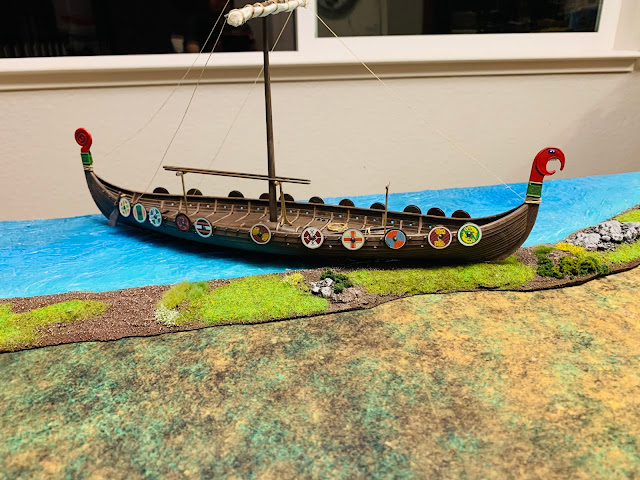 Construction pics of the River Bank

Here is a brief phot essay on the making of the terrain.  Notice that I stopped calling it shore and am now calling it a river bank.  That's called a transition.  It's what writers do. 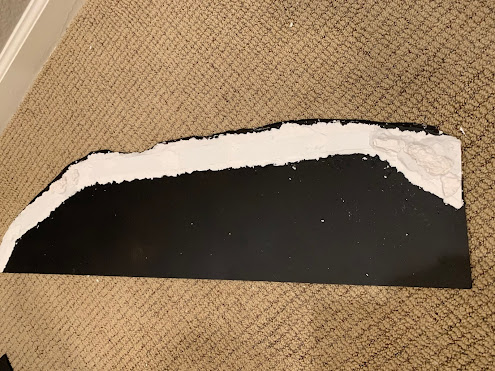 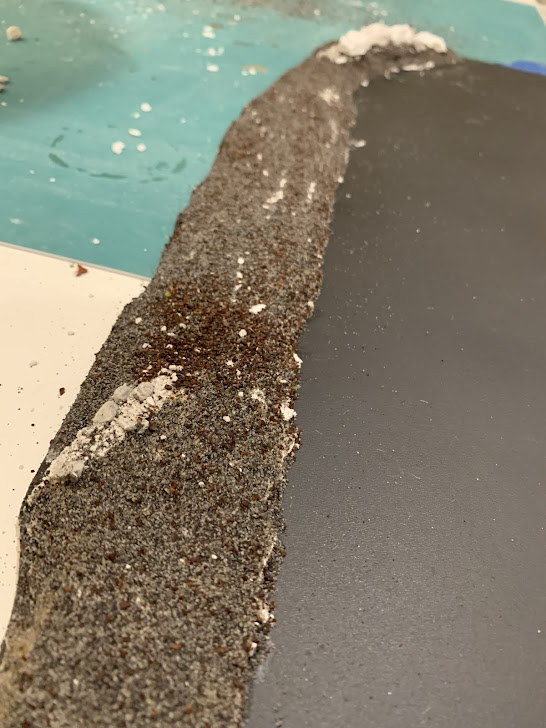 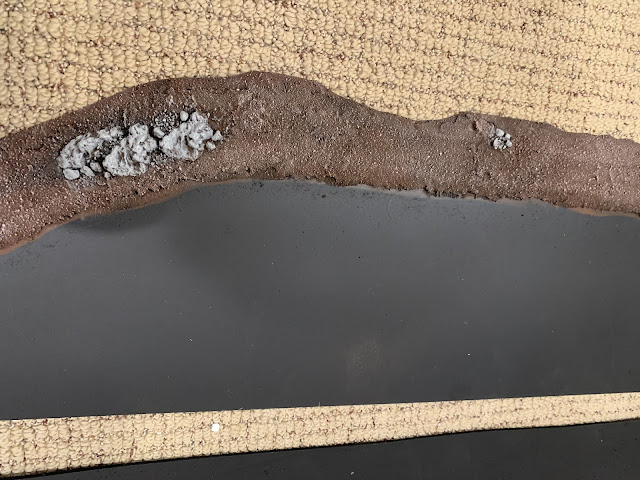 Construction pics of the Water

Creating the water effects was a process I copied from the internet using toilet paper (we're not hoarding this stuff anymore right?  Pandemic is over right?).  If you type in 'toilet paper + glue = realistic ocean water" into google there is a nice man from Sweden named Marklin with an excellent video.  It's for his model railroad.  It's amazing what you can find on the internet and how smart people are.  I love the internet.  .
If you care to watch the video, Marklin does a much better job of laying out the steps but start with..
Last step not pictured:  when everything is dry again - add flock to taste.
And there we have it.  I hope you found the process as exciting to read as it was to write.
Maybe just mildly entertaining?

Plans are for Suckers

I was just thinking about how two months ago, I had zero plans about doing anything like this.  Wasn't even in my brain that I'd be embarking on creating a dark ages shore.  The whole project just kinda sprung out of nowhere.  I think it's one of the joys of our hobby that you can just go where the inclination / inspiration takes you.  It's a fun little hobby really.  Or is that's just an excuse for being distracted.  I waaaaas planning on doing some AWI stuff.

'The Big Move' as I am now calling it; is progressing slowly.  We're much more in the phase where we are just trying to pack up stuff and put it in to storage than we are in the phase of looking for the next place to live.  We. Have. SO. MUCH. Stuff.  Least I get some exercise by moving the boxes.  I oughta have arms as big as tree trunks by the time this is over.
Thanks for reading.  Thanks for leaving a comment.  I appreciate it.  Won't be over a month till my next post.  PROM-mise.
Posted by Stew at 10:10 PM 28 comments: