As mentioned in my previous post discussing brigades versus regiments in ACW wargaming (can be found HERE!), this is the full Regimental Scenario for Barlow's Knoll using RFF.  the purpose of this post is to 1) just to share what I've been doing and discuss wargaming scenarios and 2) act as my cloud storage so that I'll be able to run the scenario easily by having all the info in one place and not in a drawer somewhere.


I'll get into why I think this would be a fun scenario and some history later in the post.

Once again, I am standing on the shoulders of giants to appear taller.  This scenario is not made from scratch but based on the work of Brad Butkovich and his book "Summer Storm; Regimental Wargame Scenarios for the Battle of Gettysburg."


Mr. Butkovich has several books on Wargame Vault and they are excellent.  I have 'Summer Storm' (Gettysburg), 'Brave Hearts Trembled' (Antietam), "Battle of Antietam Maps," and "Musketry like Thunder" (fictional scenarios).  The PDFs are very well priced for the wealth of information in them.

The books are ACW rules neutral, and he makes it easy to convert the scenarios to the ruleset of your choice, so that's basically what I did.

step 1) simplify the map. The map of the area in the book looks like this: 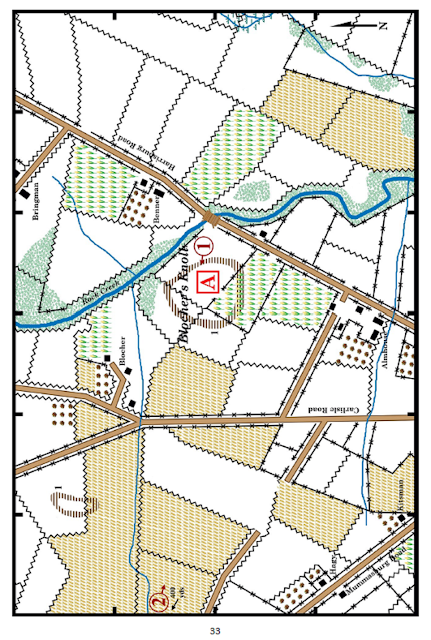 Which is very detailed and which is awesome because I rather have the source material have too much info rather than too little.  However, there's no way I can reproduce that (and of course Mr. Butkovich states in his book that it's not necessary to even try..), so I just want to focus on the key features.  There should be enough fences to hamper movement, there should be a rise in elevation in the middle of the board (otherwise called the 'knoll'), a strip of woods and a small river / stream, and of course, Darth Vader in an AT-AT.  (just seeing if you're paying attention).

Also, the map is 33yds per inch while RFF is 25yds; which is close enough to make no nevermind (that's not a typo, it's an actual phrase I use), but terrain features could be a little bigger.  mainly the knoll has to be big enough to hold troops on it comfortably.  Also I removed all the houses / buildings as they don't matter in RFF.

Another giant is Jay from Jay's Wargaming Madness. (also on the blog roll  ----->)  I asked him once how he made his scenario maps and he kindly showed me how he does it by using Powerpoint, and shared his technique WITH THE WORLD with this post (Link!).  A real stand up guy.

so using the previous map as a guide I made this map for myself and placed the Regiments on it. 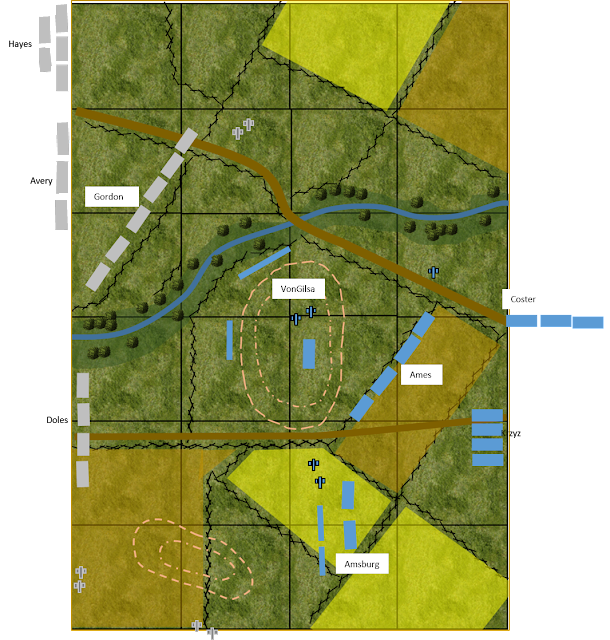 Terrain notes: fences are for usual in RFF.  The stream known as Rock Creek, ( probably because Metallica played a concert there) and woods are broken ground to cross.  Line of sight in the wood is blocked to 4".  It should be noted that cannons on the Knoll can fire and be targeted by other cannons using the plunging fire rules.  Woods has all the normal firing rules.  When charged through woods, rock creek, or up the north side of Barlow's knoll (the side facing the enemy I mean the CSA), units receive the +1 for favorable ground (and it's also broken ground).  The back south side of the knoll is a gentle slope and counted as open ground.  Fields are open ground.

On second thought, I would probably get rid of that second rise in the bottom left.  what was I thinking!!!

Troop notes: Deploy as shown.  CSA has the first turn, game is 10 turns long.  I think it doesn't really matter which regiment goes where in a long line of regiments, though VonGilsa's largest regiment should be in line on the knoll.  Regiments in Krzyz.'s brigade (that's short for Krzyzanowski, which is the coolest name ever!) start in field column.  The CSA off table batteries have normal line of sight rules, the cannons on the North edge are on a elevation (so can shoot over troops) and both add 12" to their range (measure from the edge of the board, then add 12); also the batteries can NOT coordinate their fire with each other but can with infantry.  off table batteries can be targeted for counter battery fire.
CSA brigades of Avery and Hayes enter on turn 2.  Union Brigade Coster enters on turn 7.  All starting units can move immediately.

--a note on OOBs, CSA is annoying.  The didn't do a number system like the USA did, but used names. The commanders name usually.  So the Corps commanded by Longstreet was called "Longsteet's Corps."  The Brigade commanded by Hayes is called "Hayes Brigade."  but sometimes you have the name sticking around while someone else is commanding; like in this line up, you have Avery commanding Hokes Brigade (what happened to Hokes?  I do not know).


Union Artillery positions: 2 sections of the 4th US Battery are deployed on the knoll with Von Gilsa, with 1 section deployed all by itself on the right of Ames (or put it all together if you want).
The 13th NY Battery and the Battery I, 1st OH deploy with Amsburg.  Battery K enters with Coster.

CSA Artillery positions: The Jefferson Davis Alabama battery is off table from the bottom (west), and the  Morris Virginia Battery from left (North).  Charolette's, Courtney's, and Stanton's batteries all deploy next to Gordon.

Victory conditions: holding the knoll of course!  USA starts with the key position, usual rules apply.
Heavy losses: USA threshold at 40, CSA at 38.  (should be a close game).  Heavy losses and greater losses as usual.

So before I get to the OOB, which will only make sense if you know RFF, let's talk about the battle scenario...

Why I think this will be fun...

Because it's Gettysburg and everybody loves playing Gettysburg scenarios!  Also this part is not in the movie so it'll be a fresh scenario.  but most importantly, there's a of fun history involved that influences the scenario....The USA is basically the XI Corps; which got it's ass handed to it in the previous battle of Chancellorsville when it was on the receiving end of Jackson's flank attack.  In XI Corps defense, they were staring at a giant thicket and thought 'who the hell would attack through that?  Jackson would.  Now here they are again about to receive another flank attack-- because just as General Barlow finishes moving his little division up the high ground in front of him, here comes general Early's division right down the road on his flank.  bad luck.

in both instances, XI Corps fought bitterly before being crushed, and then were derided by the rest of the army because they were Germans.... (this is unfortunately true)

The USA also has 3 poor commanders; this is not because they are bad people (well maybe they were, I did mention they were German?) but because General Reynolds has just been killed (that part IS in the movie), so General Howard of XI Corps has to go assume command of the entire field, so he elevates Shurz from his divisional command to Corps command, and Schimmelfennig assumes the divisional command from brigade, and Amsberg steps up to birgade command from his regiment...and nobody does a good job their first time.  The USA also has 2 very good commanders in Barlow and Krzyz (after reading "Cain at Gettysburg" you have to make Krzyz a Gallant leader..).

In any case you can read more about it if ya like elsewhere.  I also think it'd be fun because it shows why flank attacks were so important, and is big enough that 4-6 players; 4 players could run 2 brigades each and have plenty to do, and at 6 everyone gets around a brigade.  Everyone is on the board by turn 2, with just enough artillery to make it interesting but not too much to overwhelm.  Plus it promises quick set and easy set up with simple terrain!

What will make this more a fair fight?  Amsburg's brigade.  Historically his brigade kinda sat still while the CSA plowed through the knoll and then behind him, causing him to route and great loss to his brigade trying to squeeze through to the rear.  This happened because there were menacing looking confederates to his front, which don't really do anything but snipe at him.  Those CSA troops are not in scenario, which means that Amsburg will join the fight.

Overall: the CSA is slightly smaller, but well lead and in a great position, the USA is larger (though not by that much), with mixed leadership.  should be fun.

So I should be bringing this out to the game table in the next few months.  There's some terrain I want to do (manly better roads) and maybe some more fences, but the troops are 98% done (MORE, on that later).   When Conquest SAC rolls around in March this will likely be a scenario if the first game goes well.

and now for the OOB:

These are the labels you would use for RFF, if you're familiar with those rules then you can read tehm and get an idea of what the unit sizes are:

Thanks for checking it out!  next post will be hot on the heels of this one!