a blog post that discusses the differences in ACW gaming using Regiments and Brigades as the maneuver units.  Maybe mainly aimed at folks like me, who are new-ish to ACW gaming, or at anyone that just likes to discuss wargaming.  It's all fairly obvious, but not everyone has been doing ACW for decades...

A discussion of Perspective

For the last year or two, I've been wargaming ACW in the regimental scale; that is to say that the units that one moves around are regiments.  There are several good rule sets for this, I have my favorites though; and these are Regimental Fire and Fury (RFF) and Picket's Charge (but a rules review is for another post).

But a little while ago the new version of Brigade Fire and Fury (BFF) was released and I immediately scooped it up.  I've never played in any brigade scale games and I picked it up mainly because I wanted to increase the scope of the battles on the tabletop but use the same figures; and the difference in the scale was more apparent and significant than I realized, so I thought I would write a blog post about it.   And since I've been working on a scenario about the fighting on Barlow's Knoll, (just north of Gettysburg, on the first day) for RFF and Pickets Charge rules, I also (just for fun) put it into brigade scale and the differences really jumped out at me.  In this post I'll stick to talking about RFF and BFF as the two are easily comparable as it's the same system, same author (Rich Hasenauer), same awesomeness.

(side discussion about scale in general)

I also think this is interesting because a lot of games don't have a scale attached to it, so when games try to stay true to a scale it's an added dimension, and I've found that I enjoy games with a scale MORE.  Something about it just gets that extra click of 'looks right' from me.  For example; Flames of War (and I think Bolt Action) doesn't have a scale where 1" is supposed to be a measure of distance, its more of short-medium-long range type of game.  But the first time I played Chain of Command (with the same figures) which uses a scale; I was hit by 'oh man, this is cool, that guy with rifle can actually shoot across the whole table like a rifle could!!'
--this is not to say that good games need a scale and bad games don't; there are plenty of good games with arbitrary ranges more suited to the size of game table than real life and this is fine.  I just like it better with a scale; and I'd say this matters more in genres where weapons have a longer range versus more primitive weapons.  It's easier to believe that a bow and arrow can only shoot 12-18",  or that a musket can only shoot 24", than it is to believe that a M-60 rifle has a range of 24".  And of course buildings are never to scale.... 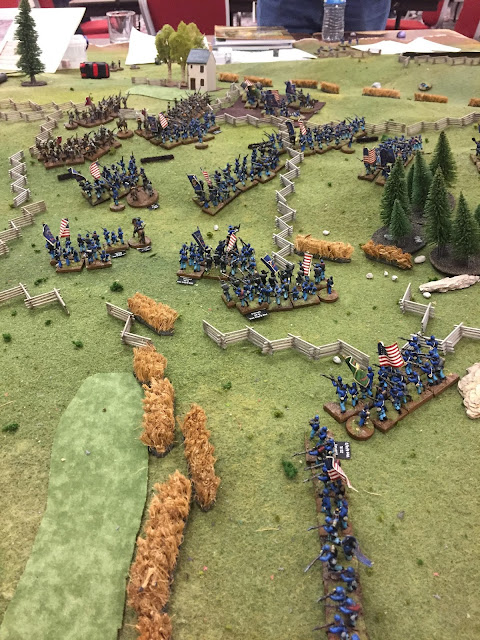 There are some implications that are immediately perceived:
From the ground scale, you can see that if RFF is at one level, than BFF is 'zoomed out' x2 (in other words,  1" in BFF is worth about 2" in RFF).  So a RFF game set on a 4x6 table would be represented at the BFF scale on a 2x3.  this also means that any terrain features shrink by half from RFF to BFF.  The number of figures used to represent units also goes down per unit; A brigade of around 1080 men in RFF is going to be made up of about 24 stands, which are divided into different regimental units (like 3 regiments;lets say 3: 1 of 9 stands, 1 of 8 stands, and 1 of 7 ), while the same brigade in BFF will have 7 stands and maneuver as one whole. 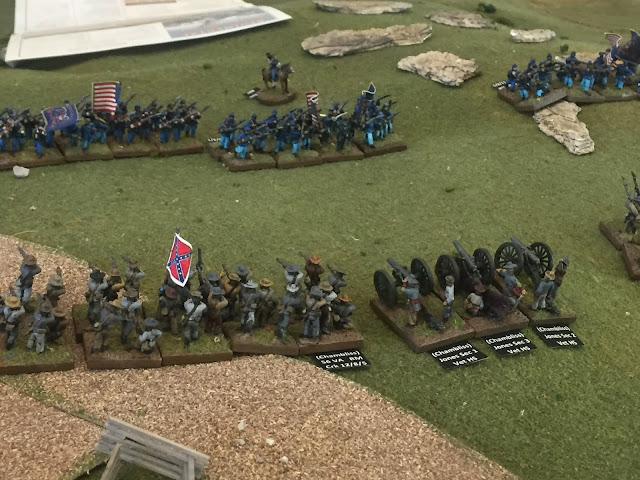 That's quite a difference, which naturally shifts the focus to either the regiments that make up the brigade, or onto the brigade itself.  This either can increase or decrease the amount of detail for those 1080 men on the battlefield; is the player dictating what 1 group is doing or is the player controlling 3 groups (each with it's own morale, unique modifiers, formation, etc..).

Not so obvious is the effect on scale on terrain itself.  Besides shrinking terrain when moving up to brigade level, there's also a dropping off of detail of the effect minor terrain features have; basically  minor features become irrelevant, only significant terrain matters.  So in Regimental games nearly all the terrain matters, in Brigade only some matters.

Snake rail fences really illustrate the point; like most ACW gamers, I've invested some time and money in having a lot of snake rail fences (the fences that zigzag) and STILL need more. Seems like every battlefield was littered with fences.  Snake rail fences are practically iconic for the eastern country side.  You see zigzag fences on a game table and you think ACW (or maybe AWI).   In Regimental gaming the fences matter; it matters for maneuver, movement, and cover.  In Brigade level the fences don't matter, just there for looks.

Other aspects are affected as well; weapon ranges, command radius, weapon types, etc..  but you get the idea; Regimental is a magnifier glass, Brigade is a helicopter view.


(Yet another side discussion: Terrain just for looks)

I'm always of two minds when it comes to terrain just for looks.  On one hand anything that helps make the game look prettier is a plus.  I like the aesthetics (you can't tell, but I spelled that word right on the first try).  Also if the terrain doesn't matter you can just throw it out where it looks nice because it won't have any bearing on tactics; break up a large expanse of golf course with some fields.  On the other hand if something is not important to the game play then why include it at all?  It's just extra mental effort for the players to remember which terrain matters and which doesn't.  Especially for first time players; that stone wall matters but the fences don't, that group of trees matters but those houses don't.  you get the idea; and sometimes it's obvious and sometimes it isn't, but I feel that gamers are trained to respond to items placed on the tabletop.  I don't have a solution or a preference which makes me do weird things.  In a dark age game if I have a village on the table I'll put civilians, carts, animals inside it just to make it look better, and move them around from time to time.  But nothing about it matters to the game.  At a convention I put on an ACW RFF game and finished the game table set up with all the details.  And then in the middle of explaining the rules I said "oh, these houses here don't really matter, just for looks, I'll just take them off now."  Was there a point to carting the things around to just have them on the table for 10 mins....? 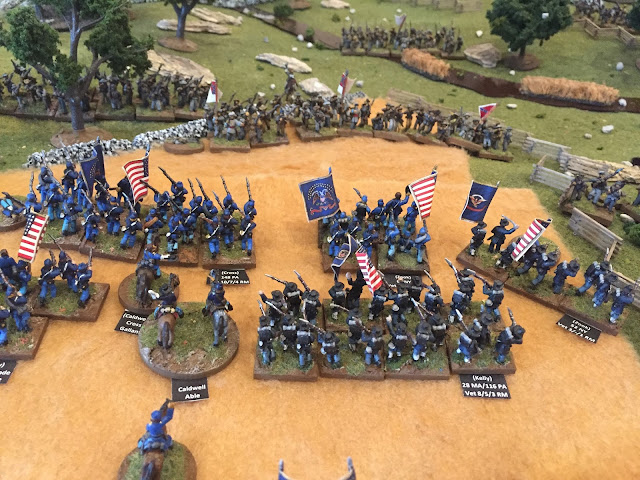 Again, it's the level of detail you want to represent.  In RFF you can have lots of details like fences, shallow depressions, woods, a dried river bed, and a ridge-line; in BFF the same table would yield woods and a ridge-line.  However what you loose in detail you gain in scope.  Because in RFF the detail is turned up you're only able to play a smaller section of a battle, and not the entire battle itself (well, I guess you could, it'd just be huge and take forever).  Which brings us to discuss Barlow's Knoll.  The fighting at Barlow's Knoll happened on the first day of Gettysburg on the north of the town; if you're scratching you head trying to remember don't feel bad, it wasn't in the movie...

I find it interesting because you have the union 11th core, all down in the dumps because they just got routed at the battle before at Chancellorsville (the core was right in the path of the CSA flank attack), find themselves AGAIN in a terrible position being flanked....

Now, I didn't start this scenario from scratch, I stood on the shoulders of other men.  In this case that man was Mr. Brad Butkovich and his book "Summer Storm; Regimental Wargame Scenarios for the battle of Gettysburg."   He actually has a whole series of these books on Wargame Vault.  His books are rules neutral, and it's not a big effort to convert the OOBs (which he breaks down to bases) and maps that he presents into the rules of your choice.  Really for RFF all I had to do was add the morale level and modify the map some.  The map shows regiments in a skirmish formations which ins't really in RFF (there is an optional rule), and really his map is just too detailed; there are a TON of fences.  You just don't need quite that much in RFF, because if a unit crosses one fence or 3, it still moves 8".

I was going to go into detail about the scenario but I feel like that would be too long of a post now so I'll do so later.  But here are the total requirements:

Now, I don't know about you, but I wouldn't call this a small game; there are 250 ish bases on a 6x4 table.  (by the way, there are 3 men per infantry base, so that's 720 miniatures carrying rifles).  I would call this a medium to large game sized game; good for 4 players.  It might take awhile to play.

This would be a very small game, almost not even worth playing... : )  Well, maybe as a demo.

Actually, it would be a fine action on a section of a larger battlefield, which brings us back to full circle: using Brigades, you would only play Barlow's Knoll if playing the entire first day of Gettysburg (which the BFF book does have, a scenario for the entire first day), because using brigades as units means using a scale to fight an entire battle.


None of this solves the main problem with ACW gaming...

You'll need hundreds of infantry sands no matter what scale you choose!  I feel this is the biggest determent to getting into ACW gaming.  As you scale down to regiments you'll need more and more stands to get each regiment on the table, and as you scale up to brigades you'll need more and more stands to represent each brigade as the scope of the battle gets bigger and you start using multiple Corps and Divisions.

It took me about 3 years, starting from scratch, to get forces on both sides to over a 100 stands.  It takes a lot of effort (and money, especially if you cheat like me and use a painting service once in awhile) but if you like ACW gaming, then it'll pay off.


Thanks for reading.  Hopefully somewhat illuminating for someone.