Hurray for playing miniature war games!  Especially in Real Life and not just in my imagination while I drive to work..


It's been awhile since I was able to play any games, just because life is like that sometimes.  So I decided that I would use a cunning plan to achieve my nefarious needs (my writing staff greatly approves of alliterations) and employed a seldom used tactic in marriage called (wait for it): COMMUNICATION.

I said to my wife, "I would like to be able to play some games before we all get all crazy busy with the holidays and such.  Think we can find a weekend where you take the kids with you to the bay area (where she works on weekends) so your parents can watch them while I stay up here and goof off?  pretty please?"

"Of course, let's get it on the calendar."
Best Wife EVAR...

SO, through trickery and manipulation, I arranged it that on Veteran's Day weekend my wife and kids left Friday afternoon and would not return until sometime on Sunday, leaving me all of Friday night and Saturday as a bachelor and free to play with toy soldiers.  Also to eat a lot pizza and not shower.


Friday night arrived and I had 4 players plus myself scheduled for the evening.  I was thinking I wanted something fun and lite but good for an evening game, a ruleset that I knew but haven't played in a bit.  It also occurred to me that I haven't used my 15mm WWII stuff in ages.  I used to be an avid WWII gamer but it's fallen off the radar these last couple of years, but I still have all my stuff of course,  because wargamers never get rid of anything!  Especially if it's painted.

Friday night game became What a Tanker (WaT) by Too Fat Lardies.  It's a great game for making tank sounds while moving the miniatures, and shooting your friends for fun and profit.


The tanks are from my old Flames of War collection:  the Allies had choices of Shermans and M10s, while the Axis could choose from  Panzer IVs, Panthers, and Tigers.
I also aware myself 5 hobby points for knowing what kind of tanks I had in the WWII collection even though I haven't laid eyes on them in years.

The first game was a (re)learning game and just Panzer IVs versus Shermans, and just gave everyone a few turns to roll the command dice and see what the terrain did.  If someone blew up they just got another tank next turn.  After a few rounds of that we went onto the scenario proper for the evening (which I literally just made up a few minutes before we started playing it....don't tell anyone, not that it was anything super complicated). 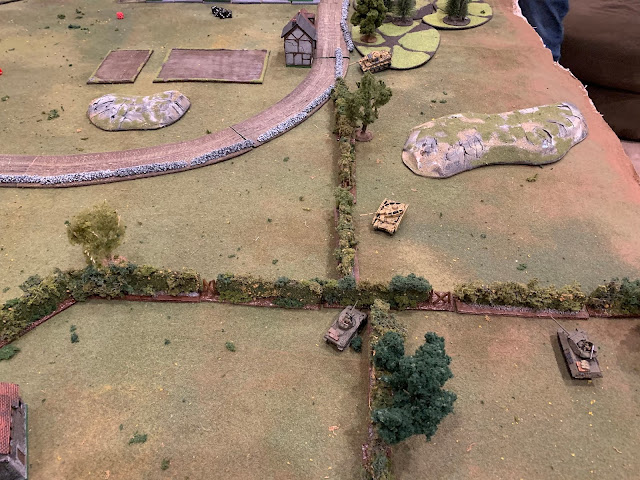 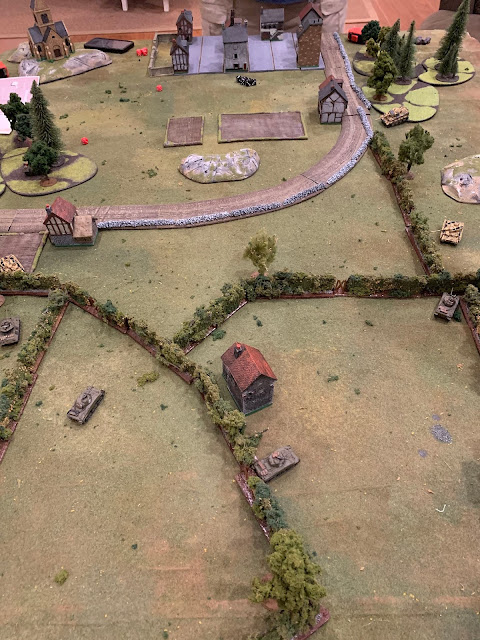 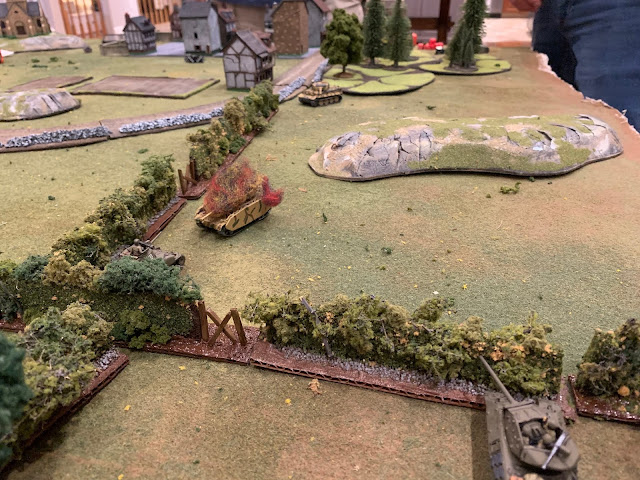 In the Proper Scenario, the 2 Axis and 3 Allied players started in opposite corners.  Each Ally got 2 tanks and could choose M10s or Shermans (because that's all I have), while the Axis could choose 2 Panzer IVs or 1 Panther or 1 Tiger.  In the end it was 3 M10s and 3 Shermans versus 2 Panzer IVs and 1 tiger.  The Allies had to eliminate the Axis tanks to win, the Axis just had to stay alive (see, not very complicated at all).


Saturday was a Ball, a Minnie Ball that is...


Saturday morning it was time for that ALL TIME best historical genre, the ACW. Rules being used: Regimental Fire and Fury.

side topic: I'm never as popular as I think I am

When I was planning out the weekend I was hoping to get around 6-8 players for the ACW game so I could do some large, spectacular scenario using ALL my troops and cannons on the table.  I sent an invite to both of the local miniature wargaming clubs that I belong to and really did not get much of a response.  Not that I can blame them, I only attend like 1 club meeting a year so it's doubtful many of the members know who I am.  But I like to fantasize that people would think "Stew's putting on an ACW game?!  I got to make that!"


I also had a few good gamer buddies not able to make it due to conflicting schedules.
Maybe more next time.

Back to the Point..
With 4 players committed to the battle (3 + me) I decided we would trot out the Port Republic ‘what if’ scenario that I ran at Pacificon last year since I think it’s a good 4 player game; with each player controlling one half of the battlefield.


It’s always hard to take a enough pics to capture the whole battle  when one is playing and hosting, and we’ve all had the experience of not taking pictures when the battle grows especially hot and engaging, so below is the random assortment of pics that I remembered to take, and this is clearly not a run on sentence that a better editor would correct; I must speak with my writing staff.


I really like this scenario.  I love how the CSA attack builds and gains momentum, and how the USA reinforcements arrive just as all seems lost.  It’s got a variety of unit sizes, unit skill levels, and varied terrain that make meaningful tactical decisions.

The only draw back is that it takes for-ever to play all the way through. Of the 3 times I’ve ran it we’ve only made it to the end once, and that was at the convention with a bunch of die hard gamers with no where else to go.  This time we started at 10 am and quit a little before 3, with the game still hanging in the balance.

After the battle Saturday night I had a birthday party to go to.   Sunday I cleaned the house while muttering to myself that I'm too old to be this tired and hungover. 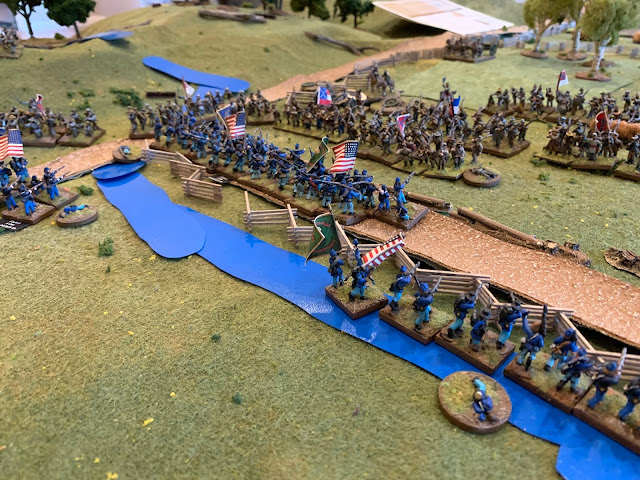 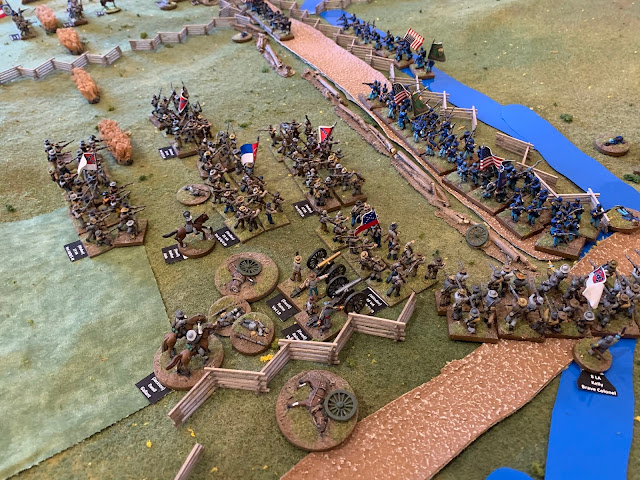 OVERALL:
I had a great weekend and it kinda was like a miniature-miniature wargaming convention at my place (see what I did there? The writing staff found that amusing).  All my guests; Mr. C.G., Mr S., Mr. M.S, Mr. A.S., and my good friend who came ALL the way from the bay area Mr. P.C; all expressed that they had fun playing.  And since we all had fun, I'm gonna call it a very successful weekend.

It’s also probably the last hurrah for me gaming-wise for the year, so it felt good to go out with a bang.


Monday was a Parade

Monday morning was spent with the family at the Veterans Day parade.


Thank you to all veterans for your service; military and law enforcement. 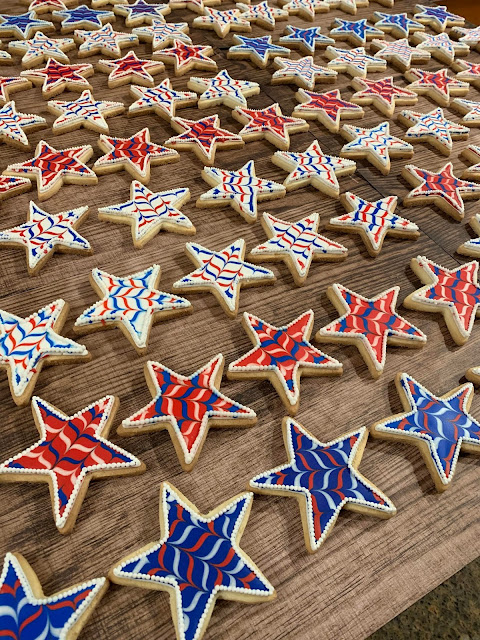 We also made a little over a hundred patriotic cookies...and by "WE," I mostly mean the wife as she is the cookie master, but I did help.  Someone had to eat the mess ups.

On the morning of Veteran's Day, we delivered the cookies to my father’s old assisted living facility in honor of his memory.  He served in the navy for 20 years and saw combat during Vietnam.


See you next time.


Morannon Orcs are made up by GW for their Lord of the Rings game.  I'm not sure if in the actual books there is a huge difference between Orcs from the Morannon and Orcs from elsewhere, maybe they have something like a southern drawl when they speak.  In game terms Morannon Orcs have slightly better stats and armor to satisfy the power gamers, and are supposed to represent the bad ass orcs that broke through the garrison in Osgiliath and sieged Minas Tirith. 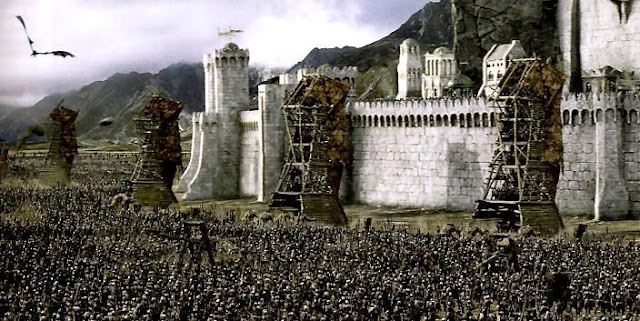 I painted these guys for use in upcoming LOTR scenarios from the Gondor at War supplement.  It took me awhile to paint these 36 miniatures but what can you do?  I'm glad their done though, as these 36 figures (or some portion of them) are used in many of the scenarios, so the heavy lifting is done to get those scenarios playable.

These are GW plastic miniatures, a little less than 2 boxes worth that I got for cheap from a guy selling them on TMP. 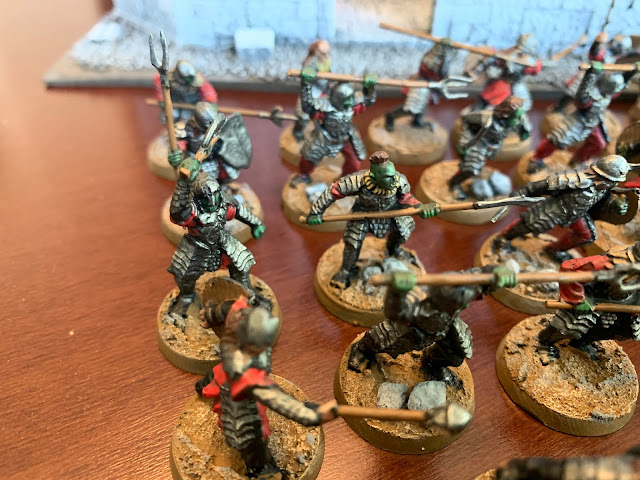 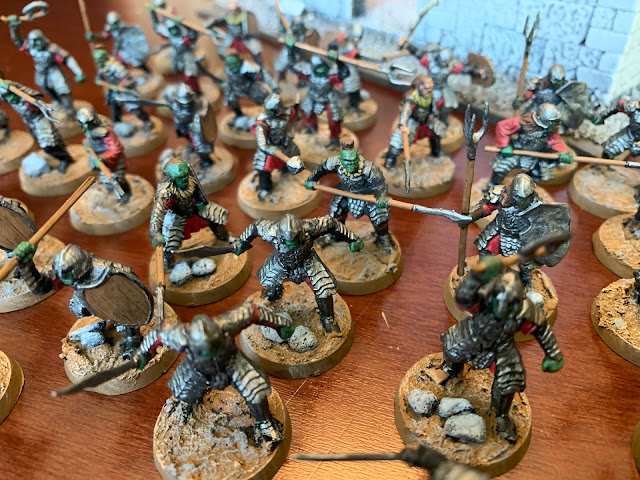 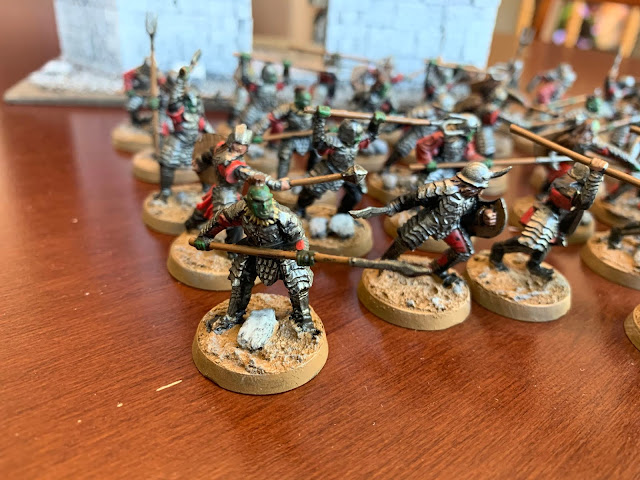 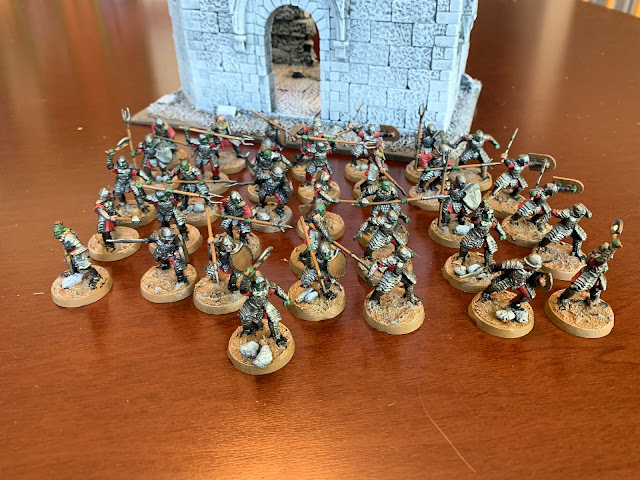 Where is all the flock Stew?
I'll tell ya.  These guys will mostly be fighting inside Osgiliath and  Minas Tirith, on my stone mat that doesn't have any grass on it, so they don't need no flocking flock.


Tried to Paint like Kuribo, and failed, by varnish


I also painted up these two special Morannon Orc characters; in the game they have special abilities and act as leaders for the rest of the mush for brains Morannon Orcs.    These miniatures are from Forgeworld and are resin.  They're also very detailed and more than anything else... expensive.
Because of these traits, I decided that I wanted to put some extra effort into these two miniatures and try to paint them, you know, well.   with highlights and stuff, even used a magnifier to see the details.  Hot stuff.

I summoned my inner Kuribo and set about the task.  Kuribo is one of my online best blogger buddies who paints his LOTR figures and terrain REALLY well.  You can find his LOTR themed blog HERE.  Check it out why not?  When I think of well painted LOTR figures, I think of Kuribo.


I've said before on this blog that in my core I am a 'paint to play' gamer, and I don't especially enjoy painting for it's own sake.  However, I enjoyed putting in the extra time and effort on these miniatures.  Maybe just because it was change of pace and using different skills, or more appropriately, using all my meager painting skills.  In any case, I was quite pleased on how they came out which was a good enough reward.  Other LOTR leaders will likely get the same treatment.

That is I enjoyed it because it was all going so smoothly until I varnished them, which for some reason went a little cloudly.  I tried my tried and true solution of putting on a second coat of varnish and it helped aaaaaa liiiitle, but overall these did not come out as good as they first looked.
oh well, what are you gonna do?  luckily for me these are bad guys who obviously don't have parents who love them so no one really cares.

Side Topic: Miniature photography is Hard.
taking pics of miniatures so that one can actually see the paint job is hard to get right.  I have yet to master it.  So instead of super close ups you get regular pics.  Even the regular pics are trash. 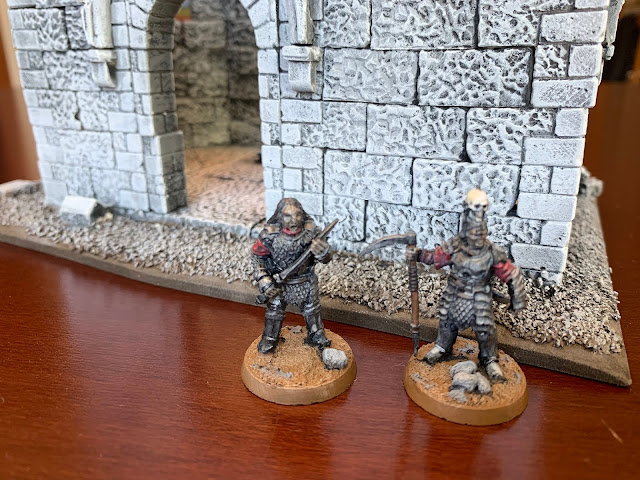 With  36 Orcs + 2 Orc leaders for the LOTR project complete, the hobbydesk is now clear to focus on something else.  And I really gotta try and get some games on the table before the year turns.

Hope to see you again soon.