Believe it or not; my fun hobby is NOT painting miniatures to an acceptable wargaming tabletop standard but is actually playing miniature wargames with said miniatures.  Go figure.
A Pic heavy post and kinda wordy.  Like ALL GOOD blog posts.

I did good in March and actually got to play in 3 games.  Cup. Runneth. Over.

Maybe this year I can redeem myself and actually get to call myself a miniature warGAMER.

Early in the month I was able to attend a game at the club hosted by good friend Mr. AS of Brigade Fire and Fury with his 10mm troops.  ACW with Fire and Fury?  Playing almost all day on a Saturday while the wife is stuck at home with the kids?   Kinda my old Gold standard of a good time. 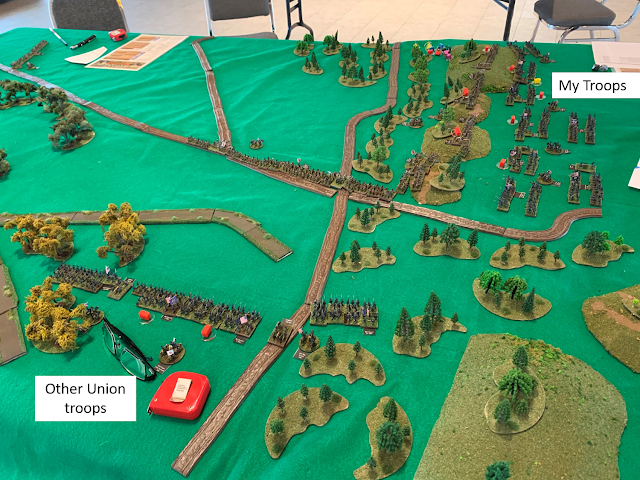 I was assigned as the Union CiC (as is only proper) who were attacking some CSA (who else?).  I took the largest force with 3 divisions stating that as the CiC it was required and because I know the rules really well I could handle it but really it was because I am GREEDY gamer and wanted a lot of troops to command.
I didn't take any more good pictures.  I was busy playing and talking, and also I tend to act as a second GM (with permission) so when I should be taking pictures when it's not my turn I'm actually helping the other guy run through the rules.
I did have the classic Fire and Fury charge result, that some people loathe but I actually think is awesome.  Charge combat is an opposed roll off with D10s.  My roll is  +5, his roll is -3.  I look at him and say "just don't roll a 10."  He rolls a 10 and the whole table erupts in laughter (making his total 7).  I look at my die and say "anything but a 1."  I roll a 1 (making my total 6, he wins) and the whole table erupts again with added Rebel Yells.  It's awesome when that happens, even if it happens to me of all people.

Later on in the month I was able to do some experimenting.  Not like the crazy experimenting I did in my youth with drugs and sex; so don't get too excited.  No, this is grown up serious wargaming experiments.
First experiment- Meeting:  I had Mr. Lasgunpacker himself -David,  from the fun Lazgunpacker blog, over for a face-to-face game, meeting for the first time in person.  A very low risk experiment as David and I have been commenting on each others blogs for YEARS now and he didn't really feel like a stranger anymore, despite starting out as just some guy on the internet.  Perhaps some of you out there would feel the same about me?.....perhaps not but keep it to yourself.
Second Experiment- Playing Outside:  I decided to host the game outside (bleh!) for 2 reasons.  COVID precautions being one of them of course but more because we were playing on a Sunday and the wife and kids would be around and I was trying to be considerate to the wife.  Not that the wife and kids can't come say hi which they did (a little too often in the case of the children).  More so that the wife wouldn't feel like she HAD to take the kids somewhere and if they all stayed home  the kids could run around the house being noisy and messy and destructive (as they usually are) and David and I would be safely out of the tornado's path in the backyard.
Third Experiment - SPACESHIP gaming!:   I recently had an interest in starting up some spaceship gaming in Star Trek and was eager to try it out (you can see this post HERE if so inclined).  David came over with a printed out hex mat and some painted ships we could play Klingon Armada.
You can see better pictures of David's ships on his post HERE.
I took the Federation of Planets, otherwise known as 'The good guys' and David played the Klingons otherwise known as 'Alien scum lords.'

Experiments Results - Successful to Terrible:
Meeting David: brilliant success.  Nice man, very polite and rolls average dice.  Gonna do more gaming with him.  Seriously nice to meet you in  a real life face to face.
Gaming outside: tolerable success.  Despite my huge preference for being inside versus outside, it was a nice day and gaming outside was pleasant.  The set up to provide shade seemed was successful and wasn't too much work to set up.
Spaceship Gaming:  Terrible!  because I really liked it and now want all my own stuff! Yet another genre to pursue.

Side Discussion: The SFU

Klingon Armada is an adaptation of the Starmada rules to be used in the Star Fleet Universe (SFU) which is best described as David puts it on his blog, as Star Trek Adjacent.  It's like it's own version of Star Trek with it's own timeline and such, and it's not the one we know from the TV shows.   It's the same universe that games of federation Commander and Star fleet Battles take place in.   Klingon Armada tries real hard to be like Federation commander.   In the SFU ships tend to fire a bunch of missiles at each other as well as the standard phasers / disruptors and photon torpedoes. The missiles by themselves are alright  but there's other stuff in there that's kinda wacky like loading up shuttle craft with explosives, setting the auto pilot, and launching it at the bad guys like a suicide shuttle.

I did though like the game play and the core rules of Starmada are REALLY good.

Finally, during the week I had Mr AS over again to play Clash of Spears, my new favorite skirmish game.  Playing inside this time as there were less children around.

Side Discussion (another one??):  4ground

I heard that 4ground would be closing, specifically will stop taking orders June 30th.  As all my dark ages buildings are from 4ground, I decided for this game to get them all on the table to see how my collection was coming along (it consists of the Great Hall and 5 buildings).  I think it could use another 4 buildings, so I might have to order these just so that everything on the table will be consistent.  I mean I have too right? Even if it means the buildings will likely sit around unopened for weeks/months/years before I get around to putting them together.
Back to the game now.  By the way, the mat is my homemade wargaming matt that is 6x10.  The table is only 5x6 but the matt hasn't been unrolled in about 4 years so I wanted to see how it was holding up. 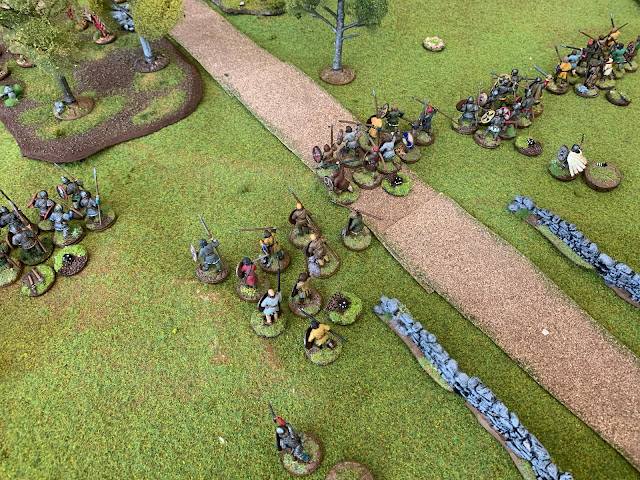 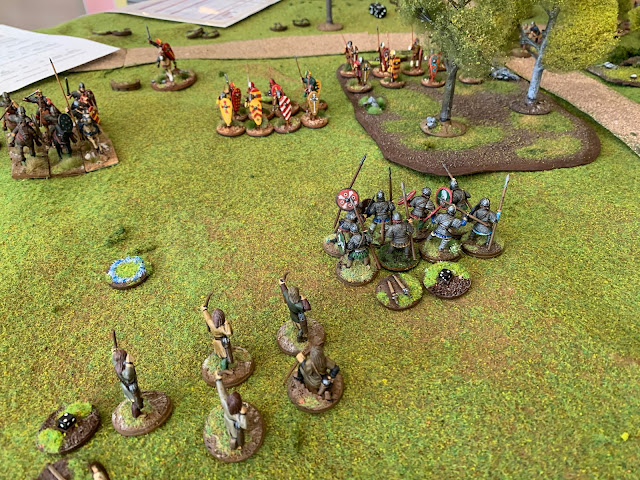 One of these days I'm gonna have to do a VERY detailed AAR of Clash of Spears game just to show you all how awesome it is.  I mean SUPER detailed, like the AARs that The Tactical Painter writes on his blog.
Let's all hold our breathe until that happens;  shouldn't be too long given that I've never written a good AAR.

Is how fancy people like me say goodbye.  Till next time.
Thanks for reading.  Double Thanks for writing a comment.
Posted by Stew at 6:27 AM 27 comments:

Why are they called the Dark Ages?

Because there were so many Knights!

LOLOLs, you know you can't touch this. 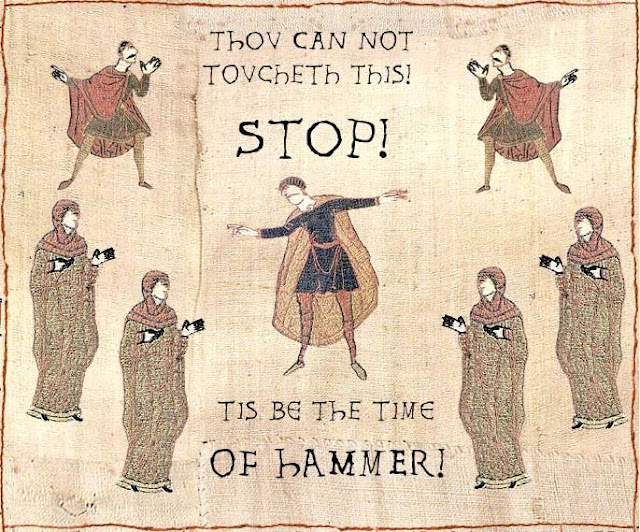 It's for Ages with the Dark Ages

That joke would work better if I had some Norman cavalry to display but alas; I am not that cool.
What I do have is more Dark Ages infantry types as I continue my goal to paint 100 of these mean little men.  In the largest batch to date I painted 16 of them; all with bristle beards or macho mustaches, strong spears and swift swords, and dainty delicate daisies on their underwear.
Bringing the total of painted miniatures to 39 out of 100.
Here are a few close ups of a few Saxons, so you can see the absolutely GORGEOUS display of my average painting. 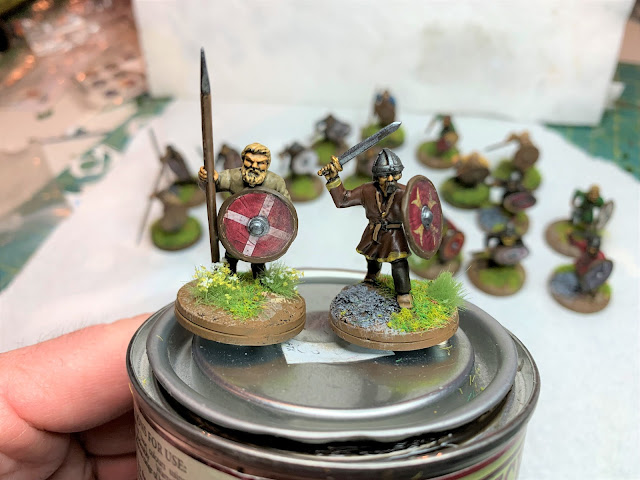 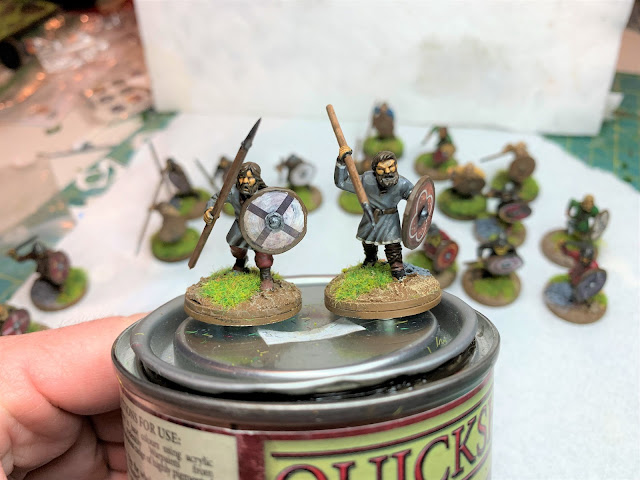 And some Vikings made it into the mix this time.
What the difference between a Generic Viking dark age warrior miniature and a Generic Saxon dark age warrior miniature?  Mostly the smell.  Saxons smell like cinnamon and Vikings smell like suntan lotion.  I duuno why.
Actually not much.  I try to give Saxons a cross on their shield somewhere and heads with mustaches while the Vikings get more blonde hair in braids and shields that have...ah... anything that's not a cross. 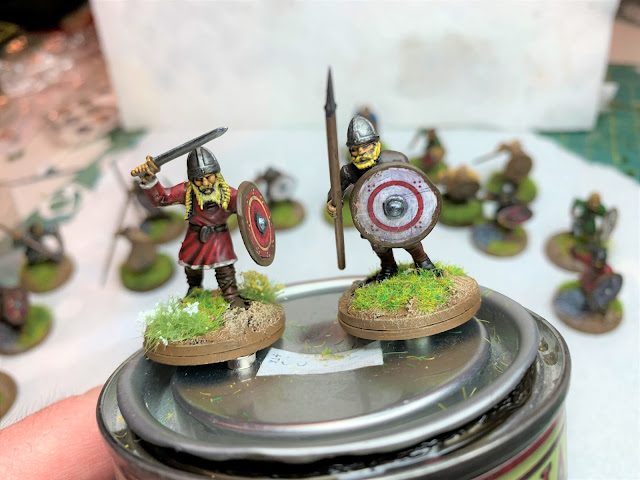 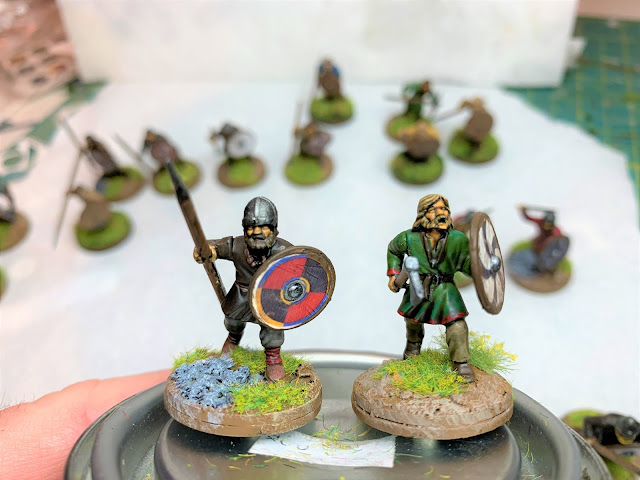 Those were some thrilling pictures of miniatures are they not?

A lot of miniature wargaming blogs that I follow will occasionally post pics of their adventures away from the wargaming table; like pretty landscapes and wildlife.  I nod along appreciatively but I'm well documented for being an inside person.  I like being inside.  Outside is lame and filled with terrible things like bright sunlight and people walking their dogs (the horror).
But my wife likes the outside and I like my wife, and moreover I like what she does for me after we go outside if you know what I mean....
(she let's me play miniature wargames inside while she takes the kids outside; what were you thinking of?)
For Valentines Day I gave my wife a weekend trip to one of here favorite spots; Muir Woods.  We went last weekend.  Muir Woods is a tourist trap on the West Coast in the San Francisco Bay Area and is basically a National Park that is full of really OLD, really BIG, really TALL Ca. Redwoods trees. 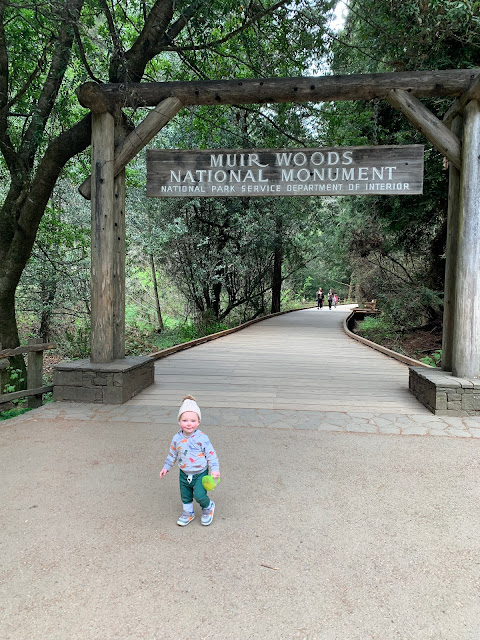 We dropped off  Daughter #1 and Son #2 at their grandparents house for the weekend but took Son #3 (barely over a year old) with us to the forest ,because the grandparents (my inlaws) can't watch all 3 of the surviving children at once; especially since Son #3 still needs diaper changes and like to CLIMB on everything.  Bless their hearts they'll tell you they can watch all 3 of them but I know better.  I'm 30 years younger than they are and I can just barely watch all 3 of them. 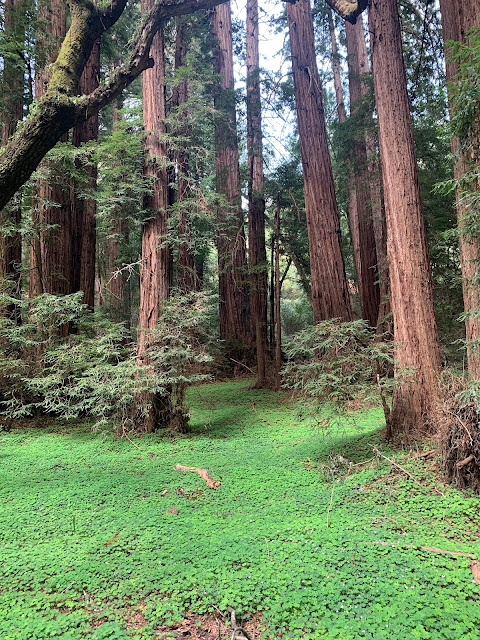 I won't barrage you with pics because it's mostly just, you know, trees.  Muir Woods has 1 main trail loop that is wide and flat and suitable for strollers and such, and a couple other trails branching  off that are more rugged.  Most of the trees there are hundreds of years old and some are even over a thousand years old. 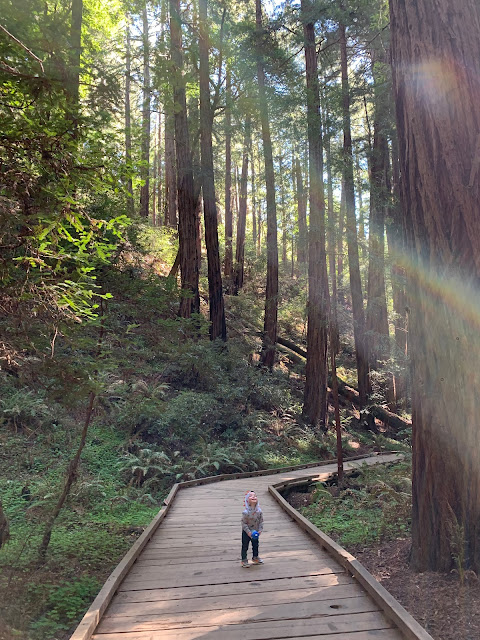 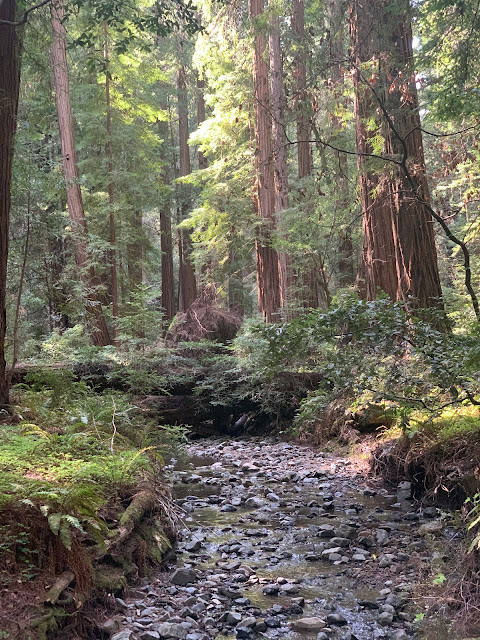 Thanks for reading.
Double Thanks for writing a comment.
Till next time.
Posted by Stew at 8:21 AM 32 comments: