seems like forever that these have been in a state of almost done.  There was always just one more thing here and there...

But complete now.  Here are two 3rd rate 74 gun ships; 1 for the British and 1 for the French, so it seems rather fair.  These are also my 3rd and 4th ships ever!  Overall; I think that I'm getting better at these models.  The rigging gets more complex, the paint job better, etc... I mean gets better for me; others with actual talent and skill can and do make my stuff look like the amateur effort that it is.... though wargame modeling is like golf in that you don't have to be good at it to like doing it.  Though for the life of me I can't think of any reason why anyone would like golf....  but I've also heard the same phrase about sex...

I've also learned that it's easier to see the details when I place a white background, so I tried to follow through with that with a very expensive light box that I made out of holding up a sheet of paper in the background when I could.....
These are also 1/1200 Langton models.


So first, here's the British 74.  The color scheme is 2 small dark yellow lines on the hull. 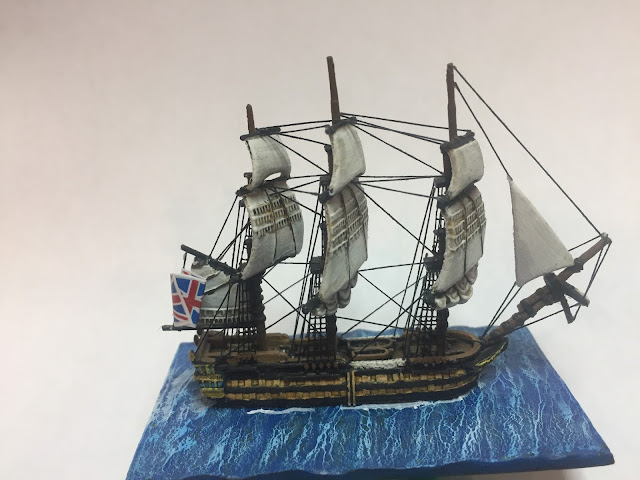 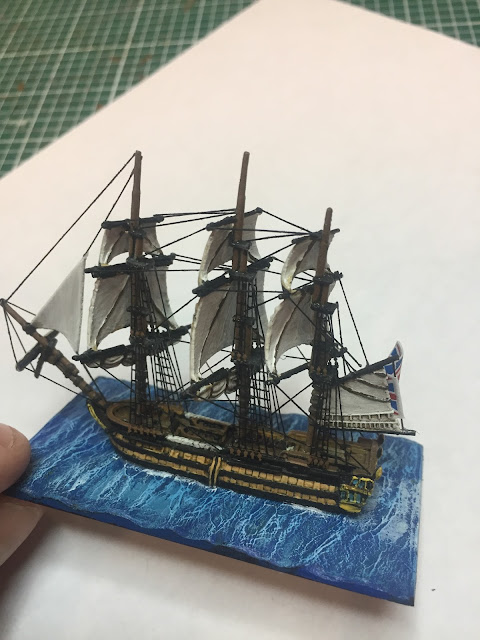 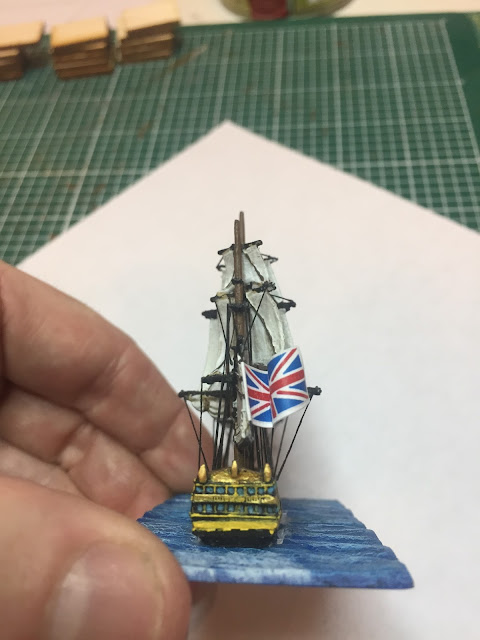 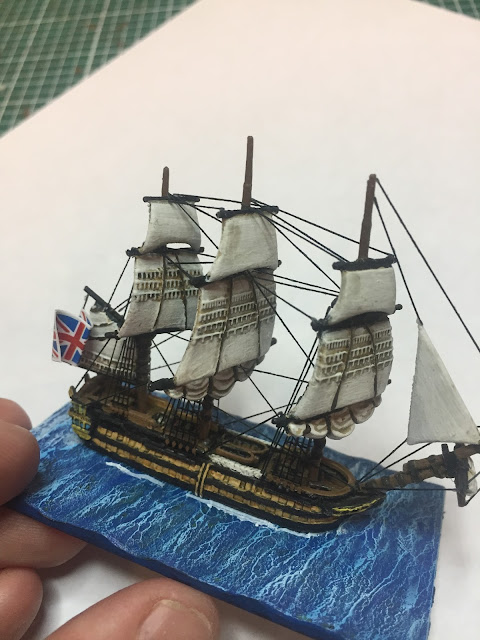 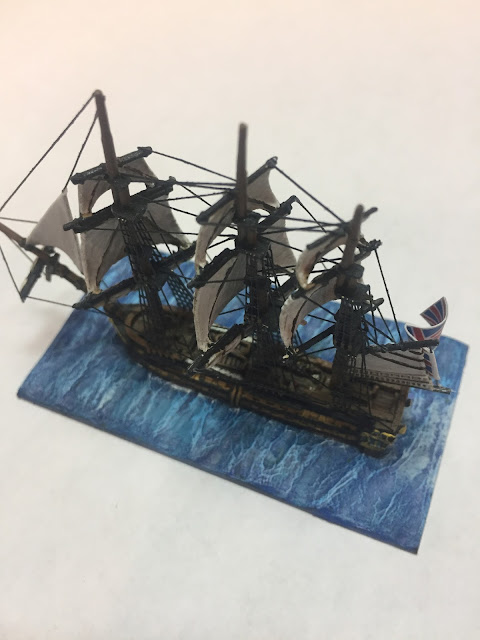 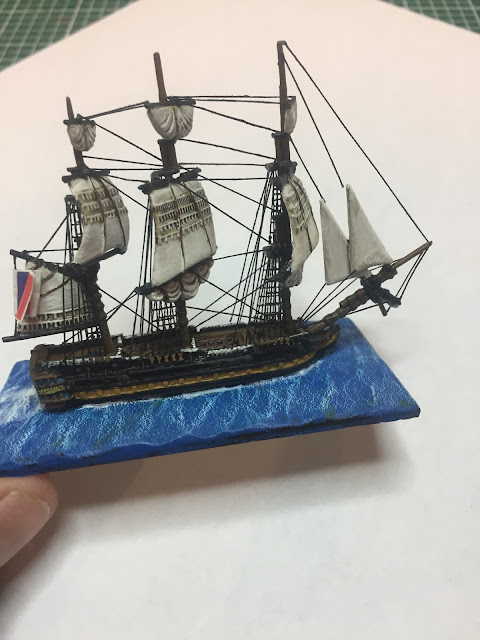 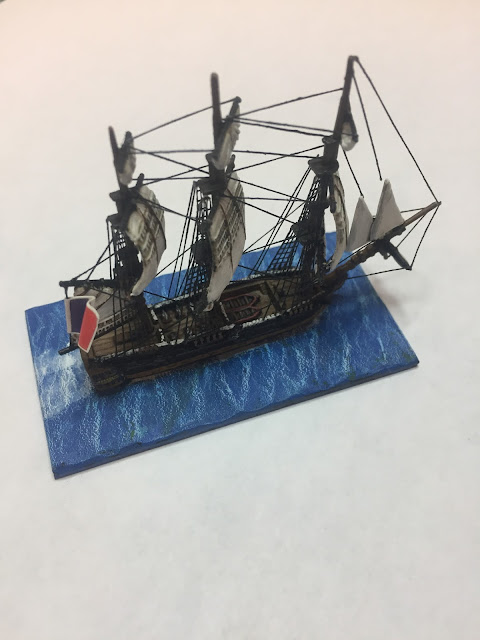 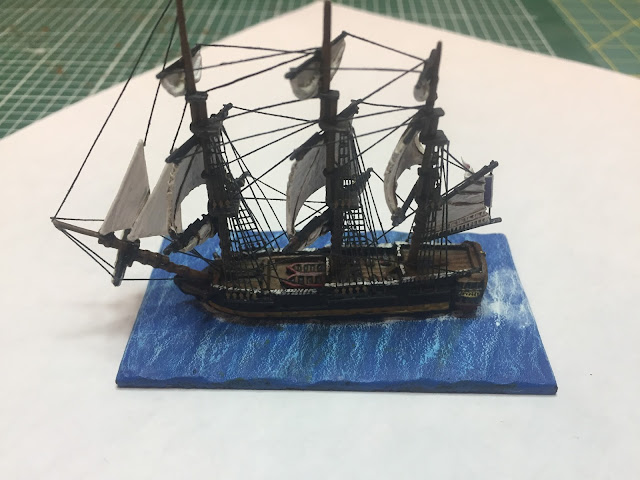 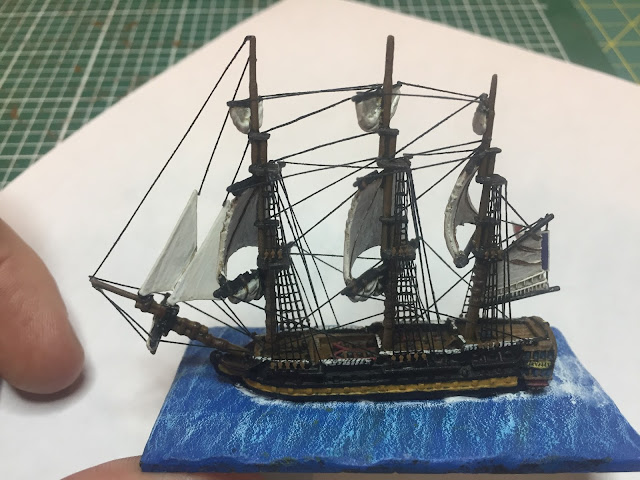 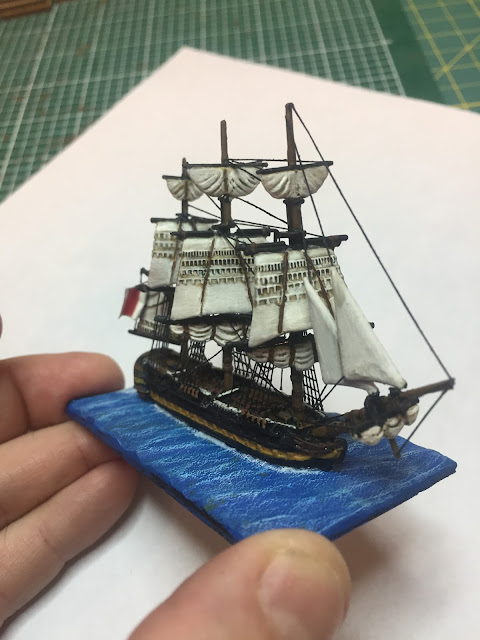 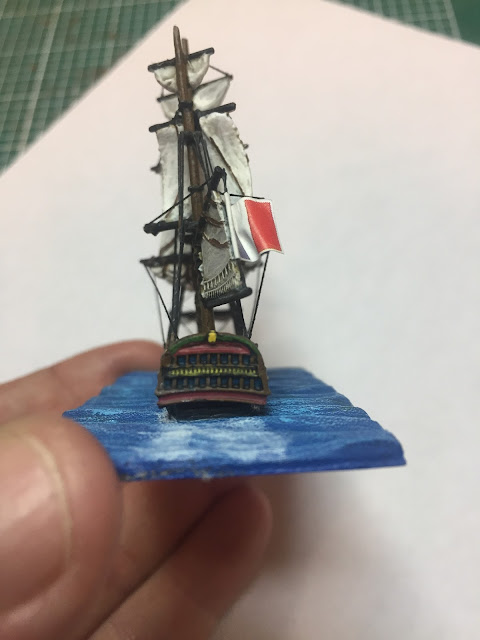 And now, for the fleet and the future:

And lastly, here are a few photos of "the fleet."  as in the 4 total ships (each side has a 1st rate and a 3rd rate).  And this is where it'll have to stop for now, as I don't have any more ships and I'm not purchasing any wargame stuff till next year.  Though 2 ships each is enough for a good game of Post Captain.  It will also give me some time to ponder how far to take this project.  I really don't have a strong desire to recreate the Battle of Trafalgar so I don't need 30 ships per side.  In fact I still don't know the history very well either so don't really have a solid grasp on any other historical action I'd like to recreate; and most of my reading so far is the Aubrey/Maturin series by Patrick O'Brain (I'm on book 7 now). 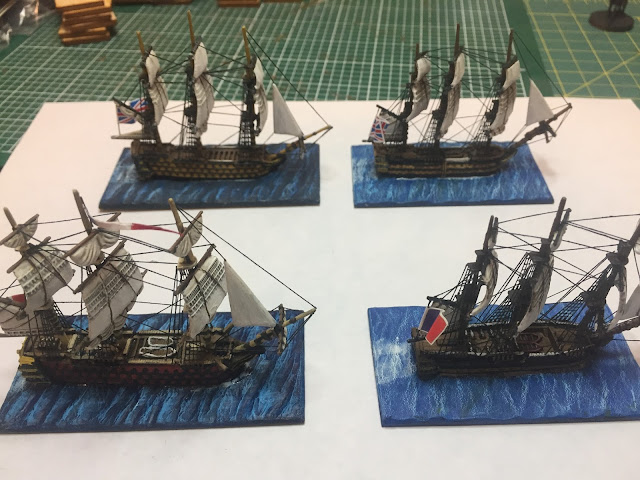 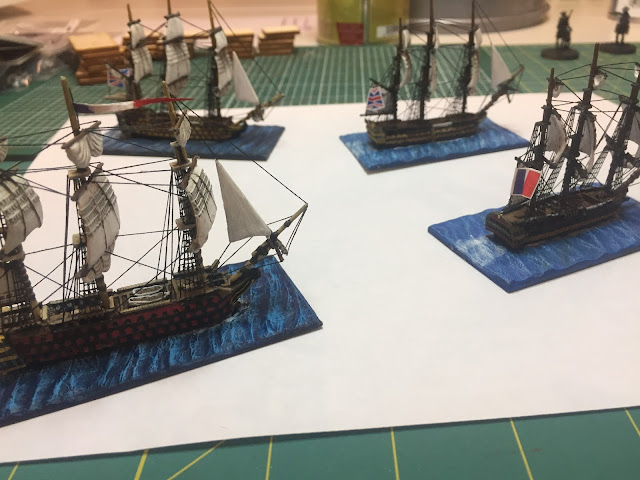 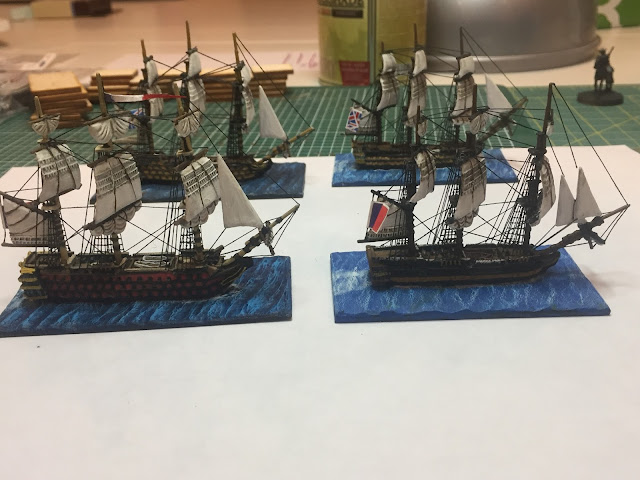 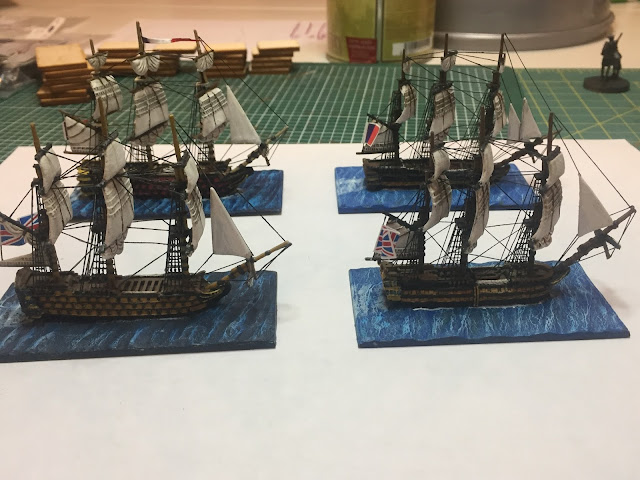 on a side note, I did finish reading Sam Willis "Fighting at Sea in the Eighteenth Century: the Art of Sailing Warfare."  It's a nice book about how war at sea was done, the issues and challenges that went into it.  It's NOT a summary of specific battles, though there is a timeline in the back of the book which puts major battles in chronological order which is helpful.  Some parts are very interesting, and some parts are quite dry.

I also don't yet have a rule set that can handle large amounts of ships anyway (though Form line of Battle looks promising).
So, I see myself just running generic AoS scenarios for the time being; small actions and such.  probably a lot of variations on the "the British are on blockade and the French want to break out" and just having different starting positions, wind direction, crew traits, etc...   To which I see about 8-10 ships to be the max needed.  plus markers and such that I'll be devising for things like fallen masts and such.

I'm also planning to purchase some magnet bases from Shogun Miniatures to glue to the bottom of the sea bases.  I like Shogun as the magnet can be the same size as the sea base, and this will allow for storage on something magnetic, and will provide a thicker base to handle the miniature with.

For awhile, I was contemplating getting a longer magnet base than the sea base by about 10mm  and printing a label and putting it behind the stern.  Ultimately I decided against it though so that the ships can be more generic.

Thanks for reading and comments welcomed!