Now that the terrain bug is thoroughly out of my system I return to painting miniatures.  Miniature painting always seems easier after some time off doing other hobby stuff, so I was able to finish off these 12 miniatures rather quickly for me anyway.  Maybe not for others.

Here we have the first of what is gonna be many many 'American' colonial militia.

Militia in MPC Coats.  What the Hell is a MPC Coat?

When I bought my miniatures from Brigade Games I purchased many packs of American Militia described as wearing "MPC coats."   At the time I had no idea what an MPC coat was and assumed it stood for something like Massive Pastry Crumbs.  For what it's worth, I think Brigade Games are the only ones who offer Militia in this selective wear.

I did some internet research:

Turns out that MPC stands for Massachusetts Provincial Congress and the coat is the one that the congress decreed should be offered up as a 'bounty' for enlisting in the militia.  (as an aside, can anyone spell Massachusetts without a spell check?  I don't think so.)   This happened 4 days after the fighting at Concord and the congress wanted to equip the men who had started to surround Boston.

The MPC resolved that  each man who enlisted for a year should be given a coat as bounty. Each coat was to made of brown wool, with no lapels and working pockets. It was based on a simple working man's jacket of the period. Samples of the wool were sent out to each town and they were responsible for making a number of jackets equal to the men from that town who had enlisted. When done they were collected and sorted by shade and regimental marked buttons attached. By 28 December 1775 13,000 coats had been made. These so called "bounty coats" served as the first uniform.

By the way, once you know they were called 'bounty coats' the search for info got much easier.  And I must add that the folks on TMP were very helpful

So basically it's a plain brown coat.  That made painting easier as it's something of a uniform.  Reminded me of painting ACW confederates. 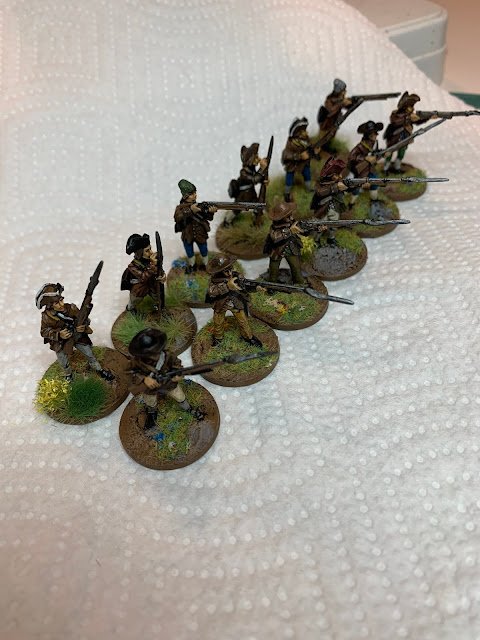 And now for some close ups, just so that you can actually see the miniatures, and not really show off my painting and photography skills.  I know I am not the world's best painter, but I am probably in the first top 10.... (thousand).

Overall I like the way these came out and it's a good start to the American forces.

The Plan is More Miniatures.  But isn't it Almost Always?

Yes it is.  Currently on the paint desk are 12 more Colonial Militia in MPC coats.  After those I think some Continental infantry might be in order just to get some more snazzy AWI uniforms done.  Because that's part of the appeal of the AWI, all the facings and cuffs and turn-backs.  Otherwise might as well be painting  ACW Union miniatures (I have a number of those to paint as well actually).

Here is how I usually try to crank out 28mm infantry:

1) Get 12ish infantry based (glued to base, texture added, some rocks perhaps) and primed black.

2) Select 4ish of the miniatures and batch paint these to completion (ie, do all the coats, then pants, then straps, then hats, etc..).  In the end the miniature is painted with a base coat and highlight, but the base is still just primed.

3) repeat step 2 until all the primed miniatures are done.

4) Using a brush, paint on the army painter 'Quickshade Darktone' to add shadows.  This ruins the brush so it's best to do several miniatures at once.  Let sit for at least 24 hours.  Maybe while I'm waiting for those to dry I can do up the next bunch of 12 ish infantry.  Who am I kidding?  Usually by this point I'm obligated to spend a night not doing hobbies but spending time with my selfish family.  Wasn't 20 mins at dinner enough?

6) Using a brush, paint on the Vallejo Matt Varnish to take away that  Army Painter horrible shine.  Let dry.  This also ruins a brush, so I have a collection of cheap brushes that are basically throw away brushes after this step and step 4.

For me, the key to keeping up motivation / desire to paint stuff is to see steady progress so breaking the process up into bite sized pieces of 4 miniatures at a time, until basically a unit is done makes it all so much more doable.

That's all for now and thanks for reading.

Halloween is this weekend, so I leave you with my favorite Halloween-y saying:

Has it really been over a month since my last post?  I'm sure you all were breathless with anticipation.  Too bad all you're gonna get are some pics of forest terrain.  Whatdaya goonado?  forgetabouit.

Following up from my forest terrain tutorial I went all in as they say and just banged out the rest of it so I could call the project complete. Maybe banged out is the wrong phrase, because it sounds a little dirty like something a high school kid would say and it wasn't exactly quick.  It took longer than I thought due to distractions (shoo kids, shoo family, shoo away work, I'm trying to make important miniature gaming stuff here!) but in the end it made a nice change of pace and now I'm ready to get back to painting miniatures.

These were all made as explained in the previous posts; here are some helpful links

I'm pleased with how it all came out.  Too bad that with COVID it might be awhile before it hits a game table, but no matter.  Prepare yourself for a deluge of leafy green splendor...

Here are the 'smaller' bases.  These are made with the idea that they will sit in the larger ones and provide more details, or just off on their own somewhere if they're being grouchy. 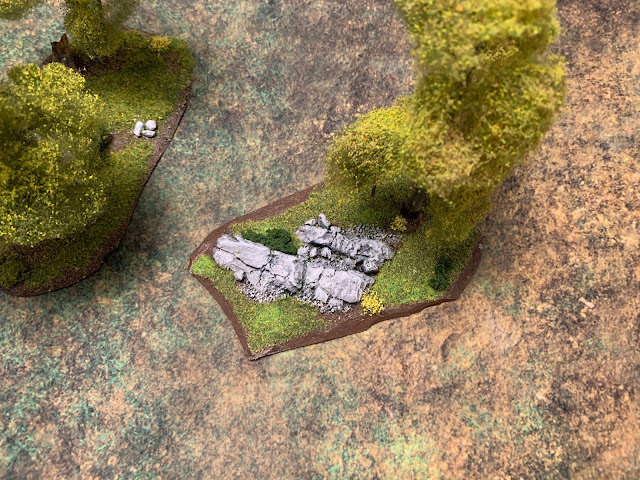 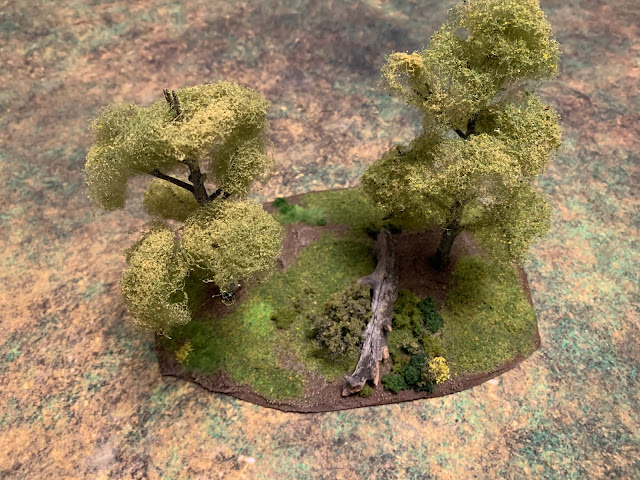 I also made a bunch of individual trees.  These are based on metal washers and the ground texture is made with concrete patch with makes them bottom heavy like a middle aged woman whose had too many kids. So they don't fall over easy.  Other than that there's not much to say, they are tree-riffic. 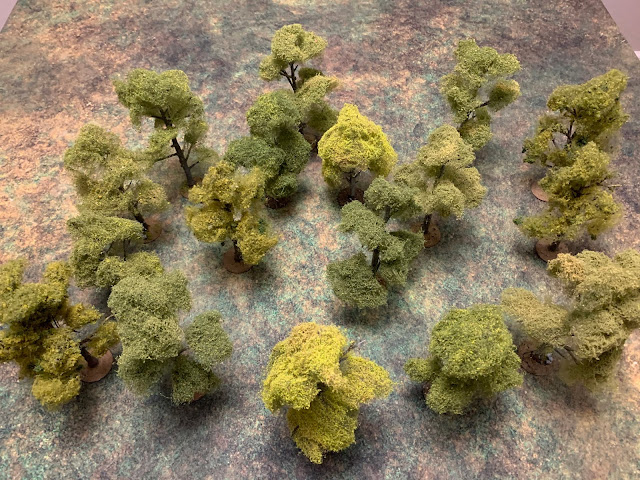 For 28mm skirmish gaming I like it when each terrain feature has it's own base, and these will be the proper forest bases indicating where the woodsy terrain begins and ends.  All the stuff pictured above will be placed on these bases so they are intentionally made kinda dull and flat.  Just some details around the corners that hopefully won't interfere too much with game play.  Each of these is around 8x11 inches or there abouts. 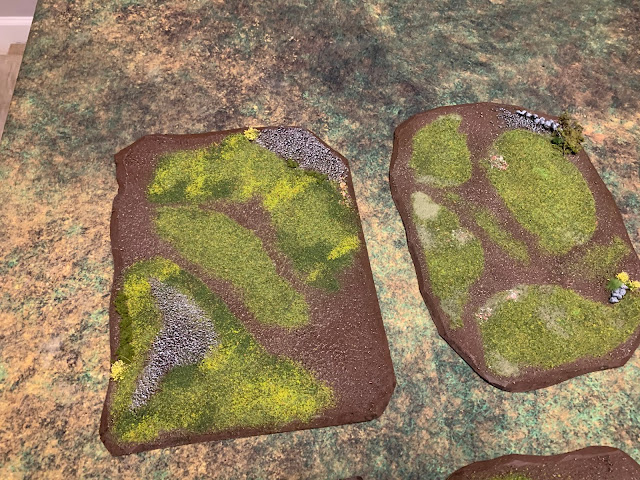 And Now for the Whole Kit and Caboodle

Now for some pics where the pieces are all put together; I think they look suitably wood/forest-ish.
Reminder: the idea being that it'll all look nice on the table and as troops eventually seek cover in the woods (those cowards) stuff can be moved off / around and placed to one side to accommodate them.  A balance between pretty details and being functional.
As an aside, I always thought the phrase was 'kitten caboodle.'  I never understood it before and have been saying it wrong for decades now.  Embarrassing. 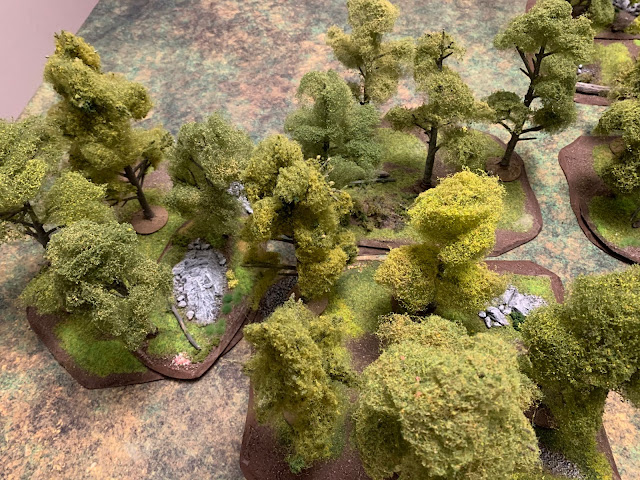 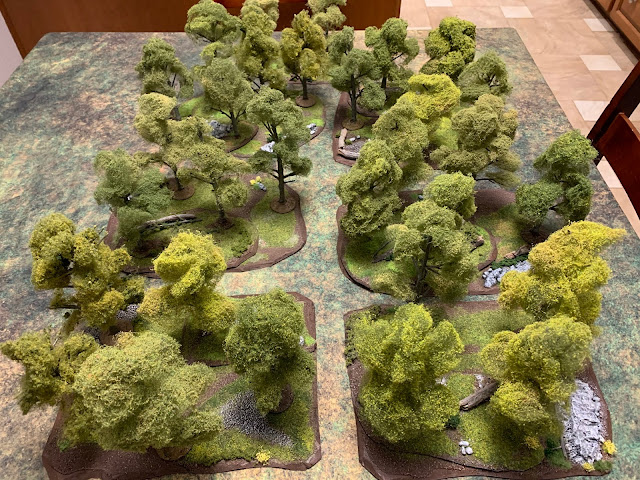 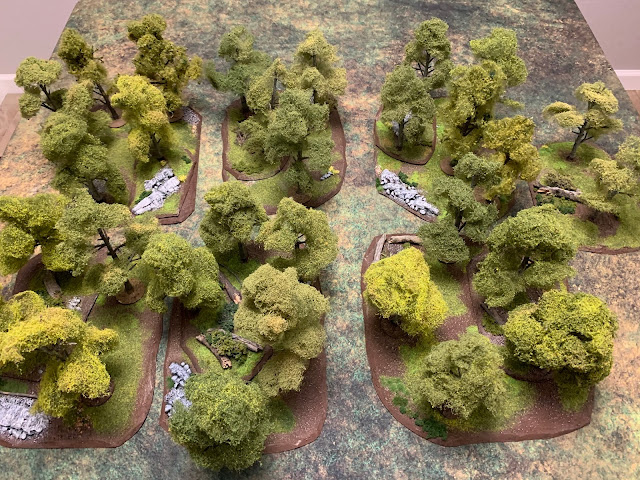 So that is the forest terrain complete and I've gotten terrain making completely out of my system.  These should come in handy for my 28mm Dark Ages, Lord of the Rings, and the slowly coming AWI.
Time to put it all away.

But wait!  there's more!  I also made a hayfield.  Complete with haystacks. It's about 6x6 inches. 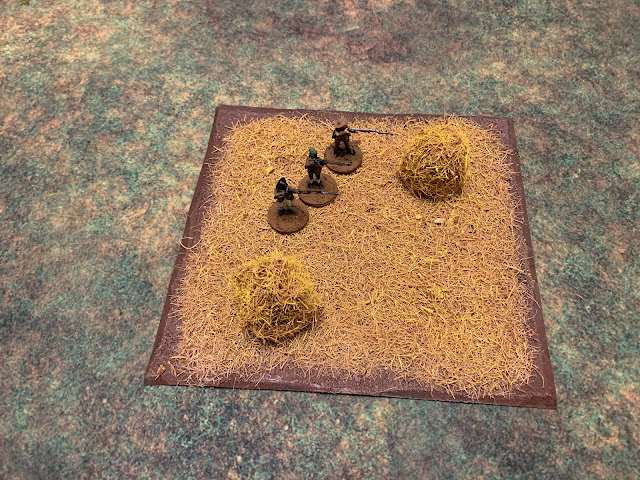 I'm not sure I love the hayfield.  I might need to see it next to some other terrain like a barn and some fences to really sell the look. I went back and forth about adding a fence to the base but obviously decided not to; I figure it'll be more modular without one.

All this terrain making has made my little hobby corner a real mess....
As you know, I can only take soo much mess before I start to feel too cluttered to do anything.
The desk starts clean, gets messy through a project, gets clean again, the next project starts...sunrise, sunset.  The painted armies get bigger.  We all get older.  Children grow up.  Not fast enough (shoo I said!).
Time to clean this out and make organized.  Till next time.  Thanks for reading, and super thanks (more powerful than a regular thanks) for leaving a comment.
Posted by Stew at 9:29 AM 19 comments: