Hello Internet friends.  I Hope you are all well.  Now enough about you and let's talk about me.

I say this every year around this time;

Halloween typical marks the end of my hobby year.  Well, if not THE END then at least the sharp decline.  In the remaining two months my free time tends to evaporate;  so hobby progress is (even more) slow and games get even harder to schedule (not that I've been gaming much anyway this year.  Or last year.  Or the year before....I need to reexamine my life choices).

It's just that 'the holidays' prep and execution take up a lot of time; especially with the children being young and us wanting to make precious-precious memories for them so that we feel like good parents.  And then the children will feel obligated to take care of us in our old age.  Which is coming faster than they think.

The goal to complete before the year ends is a simple and comes in two parts:
First Part: To finish up the Big Battle Bases (which are just movement trays) for the Vikings.  To wit; I happen to have another 6 bases done today.  Hooray!
I'm not sure if the Vikings would really have a unit of archers, but after reading the 'Strong Bows' series by Judson Roberts where Vikings seem to take archery seriously it seems like a nice touch.  Plus these guys all have chainmail and helmets which  screams to me "not skirmishers." 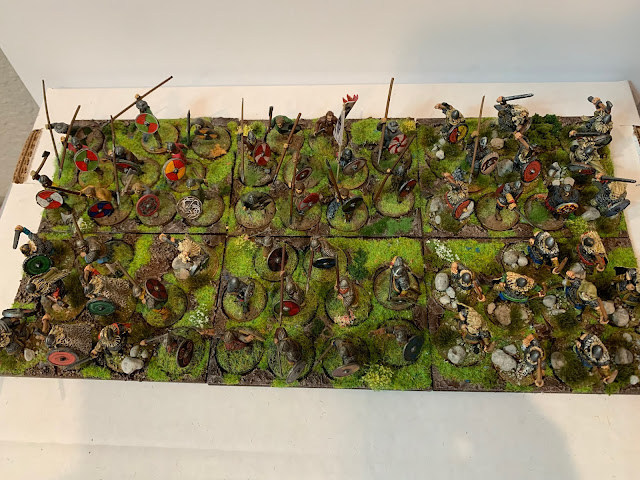 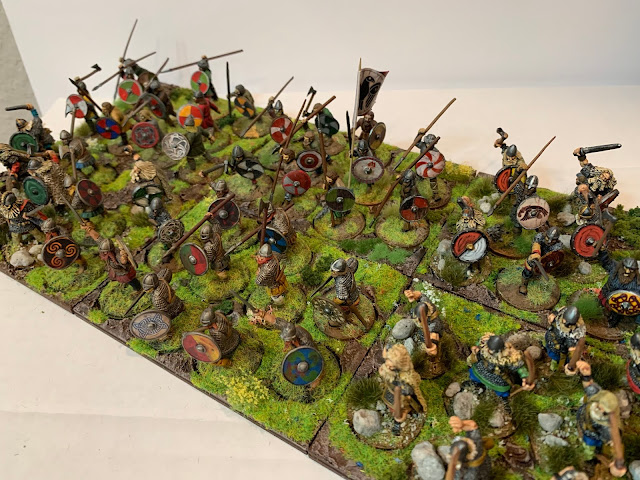 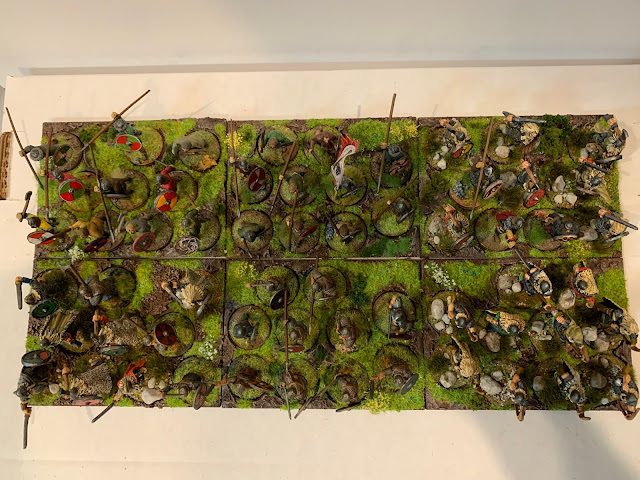 These completed 6 bases increase the Viking army to 16 bases strong now.  Getting close to be doing done.  Gonna make it.
Goal the Second Part: Try to squuuueeeze in one more game before the year is out, hopefully taking the Big Battle Bases for a test drive.  I'm thinking maybe a refresher of the Hail Caesar rules or perhaps trying out the Triumph! rules that seem a lot of fun.
Confession: I ALWAYS misspell Caesar the first time I type it.  Embarrassing.

Spears.
And no more of these little side projects.  Time to focus on the last of the Big Battle Bases.

"What did the turkey say to the turkey farmer on Thanksgiving?"
--"Quack Quack."
Happy Thanksgiving to the American readers.  If you're reading this from somewhere else then this holiday means NOTHING to you.  This has never been one one my favorite holidays; it's usually a lot of work and money for little payoff.  I mean, we were gonna eat dinner anyway right?
We have a small vacation planned during Thanksgiving.  Nowhere the adults want to go, but its for the kids.  Just more of us trying to give those precious precious memories to our offspring.
It's strange how when your children are happy, then you are happy.
Thanks for reading.  Double thanks for writing a comment.
Till Next time.
Posted by Stew at 9:56 AM 27 comments:

"I write one post and then I write ano-ther" (oh yeah)
"Do people care? I sometimes won-der"
"could you read, would you read ano-tthhheerrrr?"
"I hope you do, I hope it gives pleas-sure.
--That's to the tune of "Down Under" from Men At Work.  Did it come through in the writing?  I'm sure it did.  And now that song will be stuck in your head the rest of day.  BOOM! psychological warfare.

Speaking of Being Down Under

Vikings.  I have some.  In a totally unexpected twist of events I've made some more movement trays for my Viking miniatures.  OK, so it's NOT totally unexpected but easily foreseeable as I've been making these for awhile now; and even in the past wrote how I would be doing more in the future.
I'm something of a predictable stick in the mud.  Consistent.  It's why all the ladies find me so non-threatening.
I made up 6 trays / Big battle Bases.  Which is not all that much really.  To create the illusion of doing more than I have done; I'll show you pictures of the trays in small increments.  It's a blogging trick that.  ALL the best bloggers do it.
Here's 2 pics of the 6 bases. 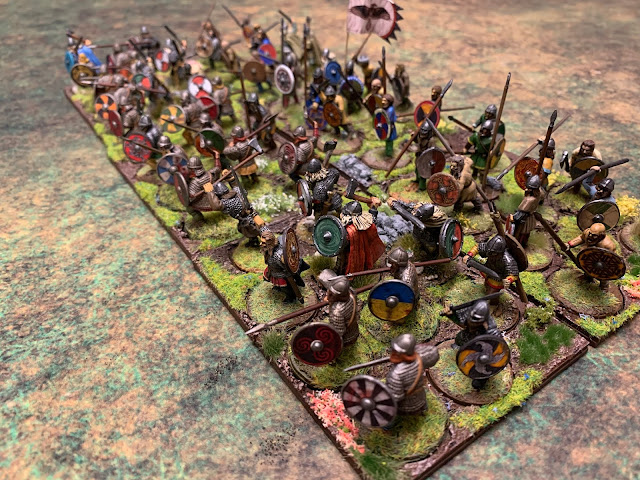 This makes the Viking Army 10 trays strong so far.  More to come.
I will blame my slow hobby progress on the baby.  Son #3 is now 10 months old, and into everything and everywhere so I had to get serious about baby proofing the house again.  I spent some nights reinstalling latches on cabinets and gates across stairwells.  Safety First.  His safety that is; I've already tripped over a gate coming down the stairs.

Wait A Minute;  That First Subtitle Made No Sense.

What do Vikings have to do with 'Being Down Under?'
Nothing really.
I'll do better next time.

We Wargamers all have different styles.  A lot of gamers I know will do a little from one project / genre and then go over to another one.  Little bit of A, then a little of B, and then some C.  I'm a little different in that I tend to focus on one genre for months at a time.  It's because I get a lot of satisfaction moving a project to it's next milestone.  I like to achieve goals; it seems to happen so rarely once one is over 30.
Yet most gamers I know while working on a project will then go buy stuff for it.  Seems to be in our DNA.  In this respect I am no different, so while working on Dark Ages stuff and sorting out what I actually had and had not; I made a little  purchase to round out some missing elements.
I also purchased a pantsload of LBMS shield transfers, but these are coming from the UK so who knows how long that will take to show up.  But there's no rush.  I don't know when I'll get around to assembling these.  Probably next year.  I just couldn't resist getting some Dark Ages swag.  It seemed inevitable.  See, I did do a better job this time around.

It's the End of the Post as We Know It

(Third times a charm for the musical psychological warfare)
I gotta run.  I hear the baby rattling one of the baby gates by the stairs and I don't trust my handy work all that much.  Thanks for reading.  Double Thanks for writing a comment.  Till Next time.
Posted by Stew at 1:56 PM 26 comments: