The Sun is Dumb

This is the scenario that I cobbled together for my fathers day weekend game.  Turns out that it didn't happen as we were meant to play outside in my backyard due to COVID precautions--
--  and while the state of Ca. has been opened up in all manner of ways I like to be safely behind the curve.  Even having people over after 15 months of no house guests was a big deal.  But as my wife is not vaccinated and we have 2 little kids and a baby in the house; gathering different people together to play games but doing it outside seemed like a good safe option to have some miniatures fun.  My backyard is shady and as long as we stick to the cultivated areas we should be safe from any backyard beasties that live in the wild parts of the yard.  I exaggerate, or do I? --
But then there was a record shattering heat wave.  I mean a "it hasn't been this hot in 30 years and whatever you do stay inside!" kind of heat wave.   At first I was stubborn about it; telling people  "if the real soldiers of the day could fight in very hot weather with black powder muskets while wearing wool uniforms then surely we can play miniatures in the shade while wearing shorts and sipping cold drinks."
Yet when the temperature for the day was predicted to be 108 F (that's 42 C for you folks in other parts of the world who use funny scales) I caved in and cancelled.  That's pretty damn hot and just sounded miserable even if in the shade.  At that temp even if there was a breeze it'd be hot.
I just didn't think it would be any fun.
Turns out the temp of the day was only 103 but I still stand by the decision.
My ancestors would think me weak and effeminate, but in my defense Miniatures really are an indoor sport.
On the bright side, I learned that I can control the weather.  So the next time you want really bad weather on a certain date, you just let me know.  I'll plan something that I'll really look forward to and should be really fun for me on the same date and BAM!  Guaranteed bad weather.
On the down side; this meant that I got to spend the entire Father's Day Weekend with my children (/shudder).

I'm posting the scenario as an act of online storage.  Sure I printed it all out and stuck it in a folder somewhere.  Sure it's saved on my desktop.  But folders get lost, computers suddenly break, but blogs are forever (right?).  And somebody on the internet might stumble upon it and like it.  It's fun to share.
I like ACW games set in the Wilderness during the later parts of the war.  The AOP newly under the command of Grant and Meade is a hammer finally being swung effectively.  The ANV is a lean mean fighting machine but needs to balance aggression and defense.  It's mongoose versus cobra and the terrain is terrible. 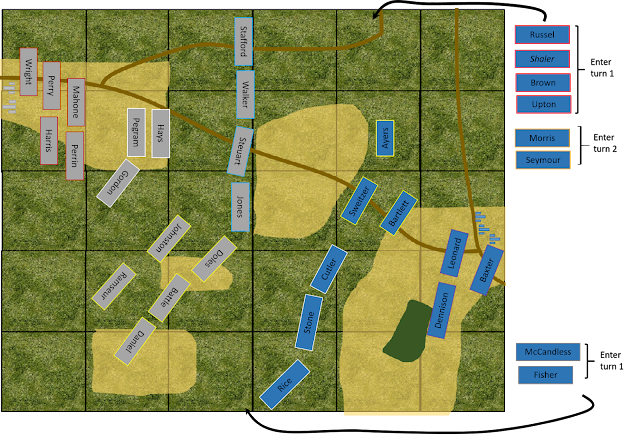 Terrain Notes:  Green areas are heavy woods.  Yellowish brown areas are clearings.  There is no other terrain and anything else on the table is just for scenic affects to look pretty; like hair highlights.
Heavy Woods counts as Rough Ground: Line of sight is reduced to 2",  grants partial cover for units being fired on, and Defending units in melee receive the +1 for favorable ground.
The roads are not good roads so do not provide a movement bonus but DO count as open group for limbered guns or units in march column moving through the heavy woods.
Deployment: Place brigades on table as shown.  Players may pick the formation but mock anyone who does not pick Line or Supported Line.  Players may place Divisional and Corps commanders where they see fit.  Enter on Turn 1 where indicated: VI Corps Commander Sedgwick, Divisional Commander Wright and all brigades in Wrights division (Russel, Shaler, Brown, Upton; in any order).  Also enter on turn 1 where indicated Divisional Commander Crawford and his two brigades (Fisher and McCandless).   Enter on turn 2 Divisional Commander Ricketts and his two brigades (Morris and Seymour).  All units enter at the double quick movement rate.
Artillery begins limbered at the board edges and belongs to the Corp commanders.
Historical Backstory:  It's the ACW; just fight fight fight!  The AOP is attempting to curl itself around the flank of the ANV when it launches an attack to stop the movement.  The AOP responds with a counter-counter attack and they clash headlong in the middle of the wilderness terrain.
Objectives:  There are 3 key positions on the table:
1: The crossroads behind the CSA which starts under the CSA control is worth 1 victory point for being held at the end of the game by either side.
2: The large clearing in the middle of the battle starts under neither sides control and is worth 1 victory point for being held at the end of the game by either side.  The field counts as being held if one side has units INSIDE the clearing and the other has none.  If both side have units inside the clearing then neither side counts as holding or losing the key position.  The clearing cannot count as being held or lost until turn 2 (basically each side gets a turn to move units into it or not).
3: The crossroads behind the Union lines is worth 1 victory point to the CSA if they at any point have the crossroads.  The CSA do NOT need to hold the crossroads to receive the victory point, just get a brigade onto it.  However if the CSA does take the objective and then loses it the CSA still suffers the -1 for key position lost.
The -1 on the maneuver check for each Key position lost is cumulative.
In addition to the 3 key positions there are objectives:
Heavy Losses:  The CSA gain one victory point if the Union reaches it's heavy losses threshold of 43 stands and guns.  The USA gain one victory point if the CSA reaches it's heavy losses threshold of 33 stands and guns.
Greater Losses:  1 victory point for the side that inflicts greater losses.
Game length:  CSA has the first turn; Game lasts 12 turns (represents 6 hours of game time).

Order of battle for Brigade Fire and Fury 2ed

Which parts are boring and which one exciting? Read on dear internet friend, read on...

While working on the shoreline terrain I completed some small side projects that basically used the same steps / materials so were easy to do.  Yay me for hobby efficiency!  Effective time management!  With all that extra time I saved I could probably watch a short Youtube video on the mating practices of Ostriches; because one might need to know that sometime.  The world is crazy.

Den.  No, not the den as in the room in your house where you store your treadmill that you never use and just hang laundry on.  I mean the Devils Den from the American Civil War in the Battle of Gettysburg.  In case you don't know: The Devils Den is really just a hill that has a bunch of large boulders on it.  It was a natural defensive position for some Union troops though really the fighting mostly swept over it to get to the hill beyond it called Little Round Top.
For a long time now I needed a Devil's Den for the Little Round Top Scenario for my ACW games.  And for a long time I kept thinking I was gonna make one myself;
because-ah, I like-ah, to make-ah, a little bit-ah, terrain.
But I obviously haven't gotten around to it yet.
As an alternative I picked up this 'rocky hill' from one of my favorite companies Battlefield Terrain Concepts.  I have lots of their stuff.  This one is described as 'suitable for Devils Den.' 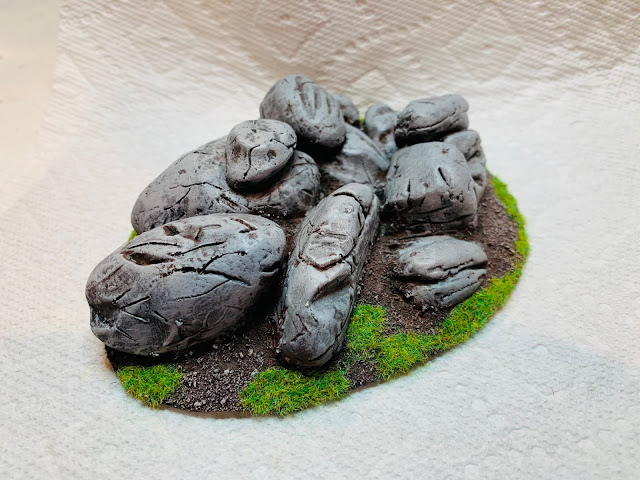 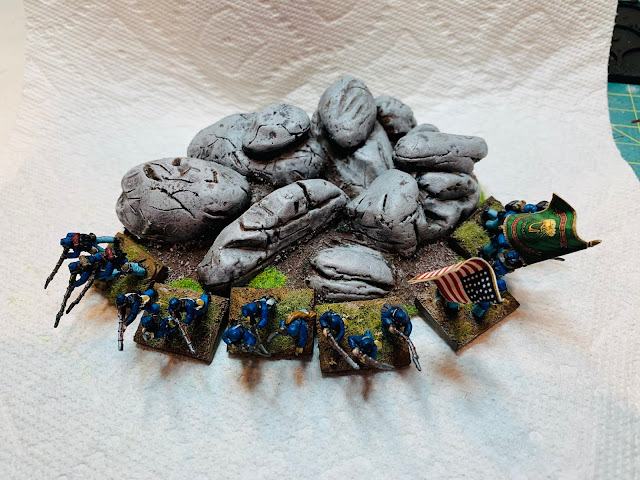 All I did was paint and flock it (As I said; hobby activities I was doing anyway while making the shore line, same colors even... efficient or lazy..)
It came out alright.  In truth I wish it was juuust a little bigger.  Maybe I'll get around to making my own *someday*.
But with this done I now have everything needed to play out the some Little Round Top Scenario goodness.  Exciting YES??
Maybe not.  Perhaps this next bit:

As seen before on the blog; I really like the rules called Clash of Spears.  The rules need a lot of counters / markers if you want to avoid having dice all over the table (which I do).  So in order to track command points I ordered these counter/wound dials.
I forget the company that I ordered them from and honestly, I wasn't super impressed with them anyway.  They are fine enough; just round MDF disks with magnets and numbers etched into them.  I gave them a basic paint job and some flock.
Two things happened:
First, on one of the disks the magnet was inserted wrong so that it's polarity is reversed (it came like that, I didn't do it.  I swear) so that the etched numbers had to face down and not up through the top disk with the notch.  grumble grumble grumble.  A simple fix of painting the disk black and painstakingly hand painting roman numerals on it.   Fixed!
Then, the more I looked at the dials the more I liked the black with the roman numerals sooooo muuuch better.  The numbers were easier to see and in general the disk just looks smarter without the bare wood showing through.
I got fussy about it and made them all match.  I used black card stock to cover the etched numbers (it helps to have a wife who's into paper crafting and always has a supply of card stock to steal indefinitely borrow) and painted the roman numerals on top of that.
I'm sure we all agree.  They look better that way.  I feel like lately my level of wargaming fussiness has been increasing.  I just want things to be proper and look right.  Maybe I can become a Napoleonic wargamer after all.

Like many people, COVID really put a kiboosh to a lot of my opportunities to play wargames face to face.   We had rules that I could go over to someone else's place to play a game, but had to wear masks, no multiplayer games, come home and take a shower, burn the clothes, sacrifice an animal to the God of Pestilence,  etc..  I wasn't allowed to invite folks to my place.  I did manage to sneak in a few games here and there.  But largely, me being the friendless loner that I am, found little opportunities to play.
Things being as they are now, many people being vaccinated and California scheduled to go all open on June 15th, we're loosening our own  household restrictions but still trying to be safely behind the curve.  Which means:
I CAN HOST WARGAMES AGAIN!
(outside, wearing masks).
So I have an ACW game scheduled for Father's Day Weekend at my place with anywhere of 3 to 6 people showing up.
See, I did save the really exciting bit for last.  It's the excitement of anticipation. 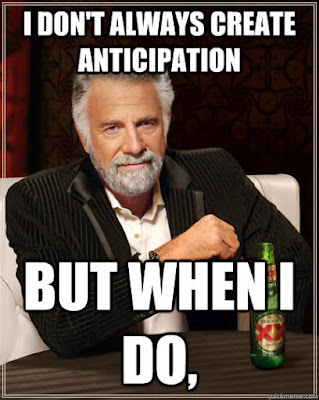 Till next time.  Thanks for reading.