Now, What Was I Doing Again?

Oh that's right: Awesome Miniature Wargaming Blogging!  I knew it was something really important like that.... 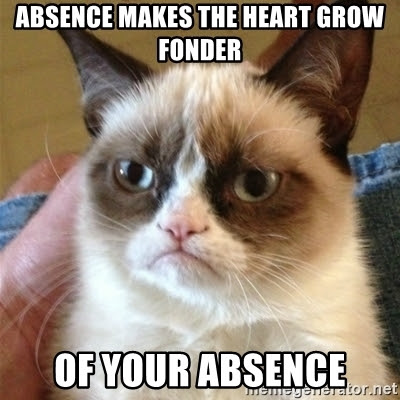 Hi there internet friends.  I've been distracted for awhile and I have hope that you have missed my unique style of prose and witty commentary.  Probably not, but lie to me all the same because I have a delicate ego that can't take much rejection.  It's what my wife does...

To make up for the lack of utterly free content over the last 2ish months, this promises to be a longer post today.  Unfortunately most of it is very boring...

Everyone seems to get to have an issue with the new blogger software, and this one is mine.
Even though  I haven't writing posts I've been trying to keep up to date with all of yours, which is something that I enjoy.  But I was struggling to leave comments as is my usual behavior as I kept getting this error after I hit publish...
And my witty insightful comment would just DISAPPEAR into the unknown ether.   I would try to write the comment again and get the error again, and you get the idea.  Then because I am lazy and lack free time I would give up.  Or if I did keep trying (because I really like you) the comment would get shorter and shorter because my thumbs would tire of pecking it out over and over again; so a several sentence comment with a funny joke would be reduced to "nice job" when it finally went through.
I don't really know why it's happening, but I'm hoping it will just sort itself out over time and I don't have to do anything.  I love doing nothing.  I already have SO many things in my life that require maintenance: house, car, my growing waist, work, children....
Good news; I have noticed that it's starting to happen less often.  I think.
SO if you have noticed that I was commenting on your blog and suddenly stopped or drastically decreased; that is the reason.  Either that or you stopped commenting on my blog so I stopped on yours because I am small petty vindictive man....but it's a new year so I'll try to grow up a bit.
But more likely the error or simply a lack of time as I've also been very distracted lately...

The main reason for being absent for the last 2 months is because I've been too busy trying to come up with a nickname for my newest child: born in early December, Son #3. 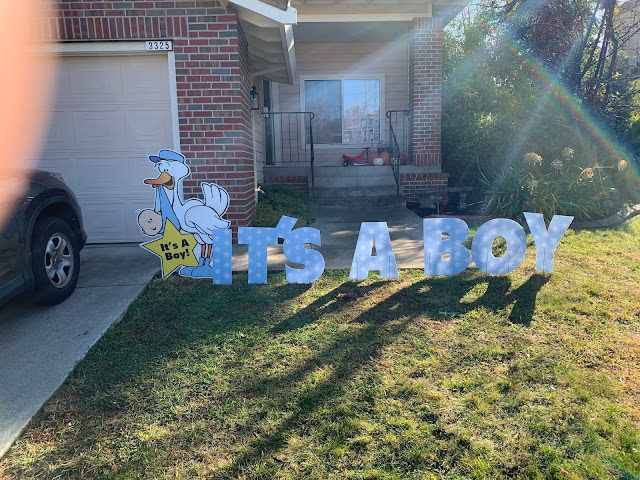 All of my children have nicknames.  Daughter #1 (age 7) is known as 'The Terror' because of her constant bad attitude.  I don't know where it comes from because I certainly don't have a poor attitude, But it's like I have my very own Nature Vs Nurture experiment going on.  Son #1 is mostly called 'The Angel' and sometimes called 'The Ghost' because he died as a baby.  He was born sick and passed away in our arms; and when he is called the Ghost it is because we are 'The Haunted.'
Son #2 (age 2) is called 'The Destructor' because he knocks over, spills, or breaks almost anything he gets his hands on.  In fact he recently broke our large screen TV when he threw a $3 plastic dinosaur at it.  HARD, apparently.  I was in another room feeding the baby while the wife was in the shower when my daughter came in and told me that "he threw it at the TV and it suddenly turned off....."
This newborn Son #3 needs a nickname; So far I've been trying out 'The Surprise' or perhaps 'The Added Complication,' which sounds right; being that I am in my mid-forties and some would say that was too old to be having babies.  It certainly wasn't something I was planning. Certainly not during a pandemic.
The only good reason for a mid 40s male to have a newborn baby is because he has a new wife 15-20 years younger than him who didn't have kids of her own but promised to do all the work...
Which is NOT the case here.
Just as well though, I don't really have the energy for that sort of relationship...
Of course the above is the Glamour pic for social media when the little guy is a month old.  The reality of a newborn is more like this....

The Current State of Play

(WARNING: Self indulgent analysis ahead):
It's been interesting times hasn't it? (damn that Chinese curse).  Last year in 2020 I managed to get in 12 actual games.  13 if you count me making my in-laws and wife play Pandemic the board game on New Years Eve (which I got as an awesome Christmas gift).   They did have fun. I should play boardgames more often.
One might think that 12 games is a respectable number in a year with COVID, stay at home orders, game cancellations of all kinds, pregnancy (which made us take the stay at home orders very seriously, and sometimes it feels like no one else does), homeschooling, and etc...  but the thing is; 12 games is also my number from the year before in 2019, when none of that stuff was present.  What gives?
It's the lack of attending wargame conventions for both years.  In 2019 I was just double booked on convention weekends with family events and of course in 2020 it was Covid that cancelled all the conventions.  But this shows that I have a pattern on relying on game conventions to get in the majority of my time actually playing games.  So instead of having a regular game day / night with the same regular people (more or less);  I do getaway weekends where I play games with acquaintances or strangers (nice as they are).  I would like to be a Regular Gamer, but it seems I am more of an Occasional Gamer.  I wonder if this says anything about me that I don't really have a regular game group?  I don't think I'm particularly unfriendly or stinky that I wouldn't be invited to such things.
Naaah, that can't be it.  So instead I blame the children; thieves of time that they are. 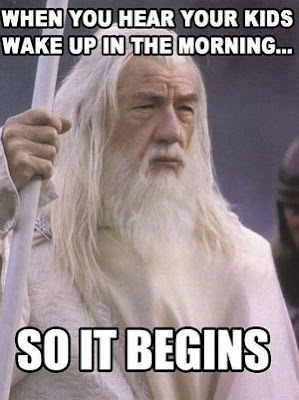 Because the thing is; A gaming opportunity has to be SPECIAL enough to warrant time spent away from the family during the weekends because they all rely on me.  I'm not trying to complain too much (but I am a liiitttle bit) because it's nice to be needed and part of a whole.  I think it reflects a phase of life.  People talk a lot about the hobby being grey (as in mainly old dudes) but I suspect that it's not so much a factor of the age of the gamer but the age of the gamer's children.   When you have young children, your time is not your own.
All of that to say that it looks like 2021 is gonna be another lack luster year for gaming; COVID is still hanging out, now there are even more children, I'm gonna have to move houses which is always a big project, etc...
That's not to say that I never get out to a club game or over to a friend's house for a game, it's just a rare occasion.  Before COVID, I would also host games at my place but that is not an option for awhile; as the wife was adamant that we could have no guests while pregnant and is just as adamant that we should have no guests with a newborn.  Which makes sense of course.  It's just kind of a bummer.
So at least for the short term foreseeable future there will be little miniature wargaming opportunities.  Which really puts a damper on my painting motivation because I am solidly one of those 'paint to play' people.  Left to my own devices I wouldn't paint anything just for the sake of painting it.
It's not that I hate painting; it's a means to an end for me, and without the End (ie, The Wargame) the means lacks substance.  It's like exercise, I don't like working out just for the sake of it; it's the end result I'm after, and the ability to eat hotdogs and pizza guilt free.
Course, it's been forever since I've actually exercised, it's just an example.  I still eat the pizza and hotdogs though.

What to Do?   Adapt and Plan

Or is it Plan and Adapt? 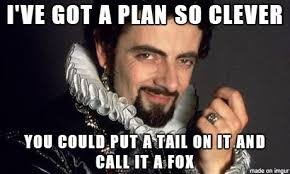 Production Plan: Of course I'm gonna keep painting / working on stuff.  But as time is limited I'm  just gonna break down things into micro projects and one at a time.  Simple projects would be better (most wargaming stuff is simple anyway, it's not a particularly hard hobby to have).  Work on one small item of terrain instead of 3, paint 4 figures instead of 16; that sort of thing.  Ideally this will still see stuff getting completed and aid my mental health /motivation as I'll see progress.  With no big upcoming game event to guide my painting goals, smaller projects will allow me to jump around easier without making the desk too cluttered.  Because I hate clutter.  Clutter is an old enemy of mine.

Gaming Plan:  Obviously I'm gonna have to rely on solo gaming for awhile.  Though I really only like solo gaming when I'm trying out new rules and want to see how they work on the actual table.  Rules read one way, and sometimes play another.  Plus the set up and tear down of a  miniature game with all the terrain and whatnot is Suuuuuuch a pain in the ass when you're just doing it for yourself.

It's kinda like cooking; when you're making a meal for your whole family then you'll cook something nice, but if you're just feeding yourself you end up with PB&J or chicken nuggets.

Given that I am always in a time crunch I also need something that I am able to set up and take down in an evening.  Which turns me to board gaming.  I did some research for good solo games and stumbled upon Journeys in Middle Earth by Fantasy Flight.   Which is billed as an Adventure game set in Middle Earth. 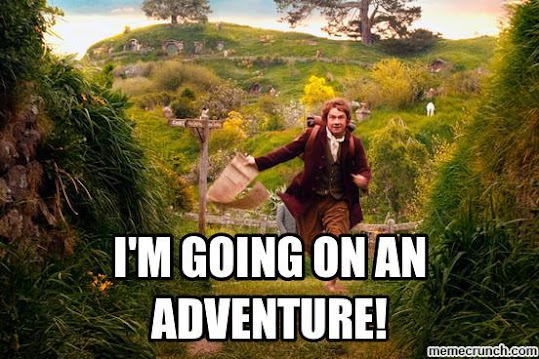 So after a day of being Super Husband and Daddy, when everyone was tucked into bed and the wife settled with a hot drink and a Netflix movie (to promptly fall asleep to) ,  I told her I was gonna try the game out and go on adventure.

I won’t go into too much detail about the game itself (not unless you ask); since you can find such info if you wish.  But I did find it to be very fun and so far have played the first two adventures.  Each adventure plays in an evening (2 -3 hours) and the whole game is run through the app so I have no idea what is gonna happen next, so it’s quite engaging.   It’s my first time playing a game that is run by a computer which kinda makes me sound old.

And There We Have It

After 6 weeks at home with the new baby, I'm back at work and we're all settling down into the new routine.  Ideally I'll be able to spend an hour or 2 a week at the hobby desk and the occasional weekend night going on a boardgame adventure.  I'm currently working on some ACW stuff for famed ACWruary month which is just a week away.  Shouldn't be too long before my next post which will feature actual miniature wargaming content; unlike this post which reads like diary.  But since I'm a BIG strong man I'll call it Journal.  A JOURNAL!
Thanks for reading, and being at all interested in my little goings on.