I Grow Self Reflective at the End of the Year

Like most people, I've had a very busy and emotional end of the year full of celebrations, fights with the family, stress, responsibility, success, forgiveness, and Love.  For all parts of life, it's the people in it that matter.
And now iIt's come to that time of year again, where bloggers write year end summaries, and who am I to buck the trend?  I am so put upon...  Actually I like these type of posts and read them with gusto, so naturally I'll take the opportunity to write one myself.  I suspect most bloggers feel this way.

This blog of Terrible Loss has been around for over a year now, Which means the blog has been around long enough that I get to look back at last year and see if I accomplished any of the goals that I foolishly committed to the internets.  Let's see if I'm in for some stunning success or slanderous shame.... there is no middle ground.


The first goal of 2018 concerned blogging in general, in which I wrote:

1) Continue to blog as long as it's enjoyable and rewarding; probably re-evaluate every few months or so.  The plan is to post 2-3 times a month.  There's some self imposed pressure to "have something to say or show" for each blog post.  There definitely seems to be a link between being more productive at the hobbydesk and writing about it.

2) Continue to promote the blog some; mainly by linking it on forums like TMP and such, and leaving comments on other's bogs.  I don't feel the need to promote every post, especially if it's just me saying "hey look, I painted something at a mediocre skill level!"  But if I am gonna put effort into writing and posting it follows that I want to increase readership.

Did you follow a link from TMP to get here?  Then the plan is ALREADY working!"


I count 33 posts of delicious wargaming content over the last year (that's not counting posts that say things like Happy Halloween and nothing else).  That's 2.75 posts a month on average.  I think that is pretty good for me and probably represents close to my maximum, even factoring in the break from blogging I took when Son #2 was born. I didn't really take a break on purpose but was forced into blog silence by sleep deprivation.
For you people who write greats post almost weekly, I'm in awe of how you could be so prolific and productive.  I think my fingers would fall off if I tried to write that much.  But having some sort of publication schedule for this blog is important to me, as I think people are more excited / into blogs that post on a regular basis.  Plus, one of the main reasons of blogging in the first place is to build and be part of some sort of online community and to that one needs regular attendance (so to speak).

Followers on this blog are up to 41!  If I was smarter person I would of recorded what it was at the end of last year so I could see how much that increased, but I'm not that smart (luckily I make up for lack of brains with my good looks and razor wit).  I'm convinced that number of followers means something but not sure what.  And I'm sure that only blogs like this one with small numbers of followers think anything about it at all.  : )

I have promoted the blog on TMP on occasion, but I've generally found that the BEST way to promote my blog is to be active on other people blogs.  To which end the number of blogs that I have started to follow has increased tremendously again, and I try to leave comments where-ever I go in the blog-a-sphere, though of course there are my favorites because I can tell that you are "my kind of gamer.'  Just like my blog is certainly one of your most favorites EVER (don't tell me otherwise, let me live in ignorance).

SIDE DISCUSSION: Blog lists:
By the way; this is how I organize myself for blogs, as I see it rarely discussed and I wonder if I am different.  If I'm following your blog I'll certainly add it to the list that appears here on the right side of the screen (if you are looking at the web version versus mobile).  I have it set to show 25 at a time.  When you update your blog it'll shoot to the top of the list.  Then later on while I am enjoying some alcohol or other substances at the end of the day and goofing off on my phone I'll go through the blog list and read the updated posts.


The next goal of 2018 concerned gaming, as in games played:

2018 Goal #2: Gaming:I'm going to set a gaming goal of having 24 "gaming experiences" throughout the year, which averages to 2 games a month.  Some months will have more, some less.... The idea is to just play enough games to feel like I actually have a hobby of wargaming....

Speaking of the web version of the blog, also on the right side is a box that tracks games played of 2018.  There are rules of course to what counts as a game: namely it has be be for a least an hour and either involve miniatures or be a boardgame that made for adults, so games of disney princess Candyland, Sorry!, and Monoply Jr.  with Daughter #1 don't count (though are important).
I see 24 entries in that box so it looks like I just barely made it, and that's with almost no gaming since October.  So the lesson is: get your games in while you can.


And Finally; like all wargame blogs, we have a bit about what was painted in the last year.  I talked about 4 areas at the beginning of the year and it makes sense that we'll grade each separately don't you think?  (and even if you don't think it makes sense I'll do it anyway; kinda like in a  marriage).

Goal #3 of 2018: Production:
-ACW: Currently each army is around 120 bases strong, and I'd like to increase that to 150 each so slightly bigger games can be played; this will also mean that I'll need some more markers for things like being disordered, low on ammo, generals on horseback, command stands,  etc...,

Evaluation: SLANDEROUS SHAME.  I didn't do this.  I blame getting distracted with the big Lord of the Rings ruins terrain project for the last part of the year versus painting miniatures.

I am tempted to cut myself some slack here.  People who have been following the blog and care about ships already know that the ships that I do have very heavily damaged not once, but twice! (see HERE and HERE  if you are inclined).  So I could give myself partial credit since I've definately made and remade enough ships to bring the count up to 8 ships.  But we're grading with all or nothing here and there are only 6 complete ships at the end of the year...
Evaluation: SLANDEROUS SHAME.

Terrain: first comes the miniatures, then comes the terrain.  Really I want just to make the ACW battlefields POP, and I like a  good looking game.  And for any other 15/18mm mass battles that I want to take on in the future.  So I have some ideas for 15mm roads, MORE snake rail fences, some bases with multiple trees on them for easy "Woods," more fields, and some houses / buildings.

Generic casualty markers/trackers: I have several games that I like that instead of removing figures you add a casualty tracker, that counts up as the unit takes damage.  Games such as Hail Caesar, Sword and Spear, Picket's Charge, and Sharpe Practice 2.  I don't have a good way of doing it and just leave a dice behind the unit, and I want something prettier.

Evaluation: SLANDEROUS SHAME.  didn't even do this.  the reason is simple: for the past year I never even played a game of Hail Caesar, Sword and Spear, Pickett's Charge, or SP2.  It's these darn other games that are so sexy that took my time.

That's a score of 3 to 3;  Even Stevens.    Just shows that in all things I strive for mediocrity.

for the success, I shall award myself an 'i'm awesome' meme.. 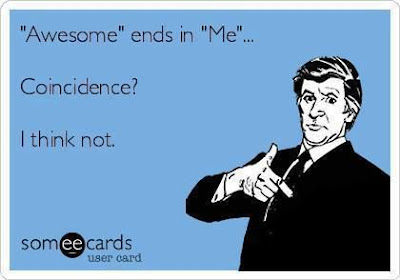 for the failure,  I am punished with a shame meme 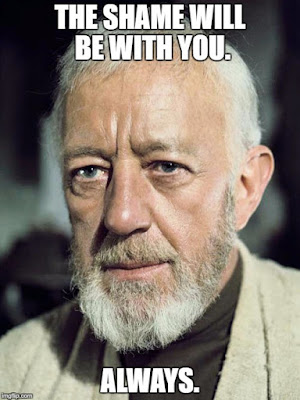 NAH! it's more a reflection of how good I am at predicting my future behavior than my year of wargaming.  and while life has it's hardships, I've very much enjoyed this hobby and blogging about it.  I really love this hobby and wargaming, and I'm ever grateful for being exposed to it and able to do it as often as I am.