4 year old Daughter #1 comes into hobbyroom wanting to know what I was doing.  I guess the Peppa Pig cartoon ended.
She puts her foot on the plastic tub that has the Napoleonic ships inside, which I stupidly left on the floor, like she's about to stand up on it to see onto the desk better.
I say, "Oh, don't stand on that, the stuff inside is fragile, just wait a sec.."  and then I look away for just a moment...

I look back:  She obviously didn't listen, stood on it but just on one side, and the thing went flying end over end and her down to her butt.

My wife says I'm father of the year for not loosing it.

Daughter #1 did get a time out for not listening.  I picked up the tub and heard the tell tale sound of small pieces moving about loose from inside.

Meh, maybe not as bad as it looked.  I think it helped that the ships hulls are glued on wide ocean bases, which are on magnets, and placed on some metal while in the storage tub, so maybe they didn't knock around as much as they could have.  I tore off all the rigging as much of it was ruined.  Bent the masts back in place, glued back on some broken masts and sails... All in all not too bad. 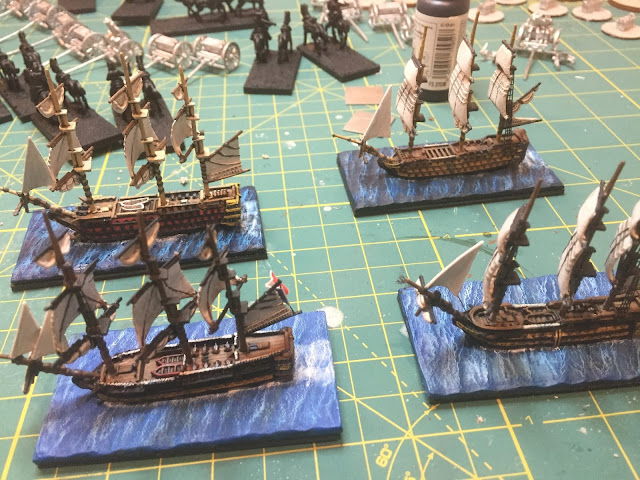 Instead of trying to figure out which ratlines went where from that huge pile, I've decided that I'm going to bite the bullet and get new ratlines and then redo ALL the rigging for all these ships, plus the two I'm painting now...So the future will be ships for the time being.

The hardest part will be, when I make the order to WaterlooMini's for the ratlines, to resist the temptation to order even MORE stuff.  Like even more ships...

Such is the life of the Wargamer.  Trails and temptations abound.  : )
Morale of the story: pick up your things from off the floor.  : )