I finished up the remaining 5 CD bases along with a batch of 7 or so singly based trees to add to the collection.  I added some rock piles to these CDs just to vary up the terrain some.  The single trees are based on a large washers to make them bottom heavy, just like me.  Came out looking like this: 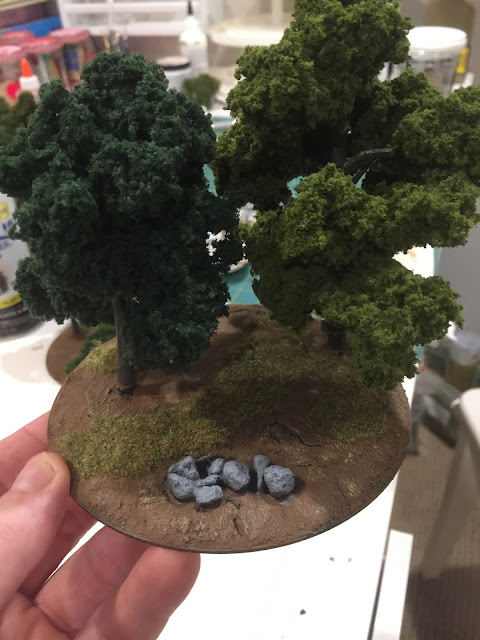 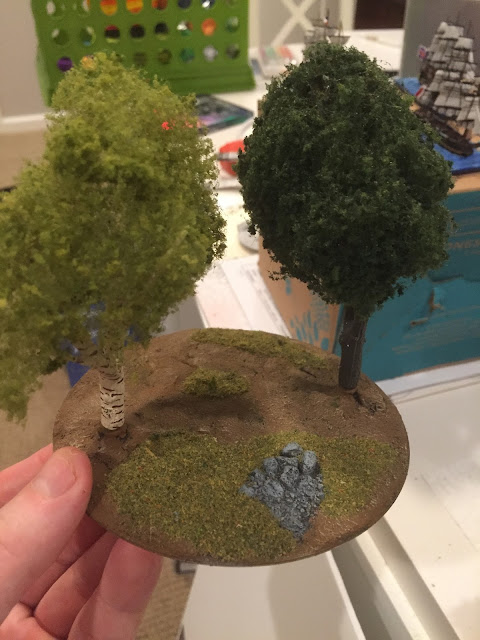 unfortunately, I forgot to take pics with figure in for scale.  I am lame.  I owe Lasgunpacker one awesome pic in the future....

Stick to the Plan man!

As discussed in the previous post (see HERE), the idea is in future 15mm games to shake out some Woodland Scenic Earth Blend onto the wargame mat to make the area for the the woods, and put the trees on top.  The bigger idea being that I could then make woods in any size/shape that I want.  I tried the plan out on my old GW wargame mat.  I don't use this much anymore because I have homemade wargame mats that I prefer that I use for my gaming because they are 5x7.5 or 6x10. (If interested in that process you may look HERE )   But those were all-the-way-in-the-garage and I was feeling lazy.
So the mat goes on the table and I laid down a layer of the earth blend and placed some CDs on top.  Looked like this: 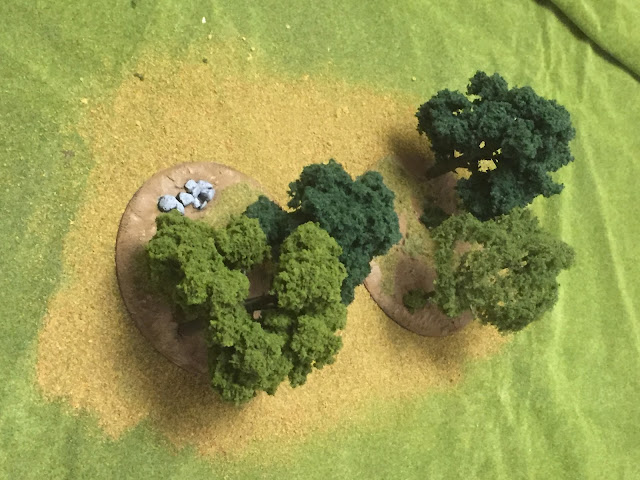 Meh, it looks alright but I was not over awed by the effect.  Somewhat disappointing, but close to what I am thinking.  Maybe it'll look better on my actual wargame mats which are a darker green than the bright green this mat is....  time will tell.

However, I'm not saying it's wasted effort because one can never have enough trees.

and everything together; the whole collection:

Which lead me to think, "how many trees do I actually have anyway?"  And as the night progressed and I found that I strangely had access to a clean kitchen table while other family members were engaged (daughter #1 in bed, Wife in the bath) I decided to put out all the trees for 15/18mm gaming to see what I had.  This meant I had to walk to the garage after all.  OH the constant toil... 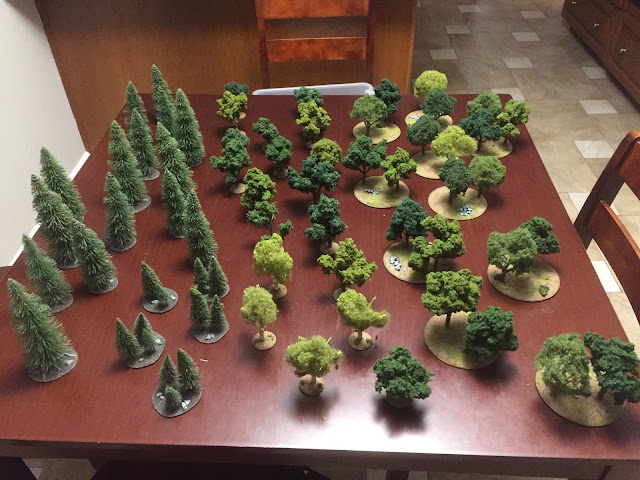 The table is just shy of 3x3 feet, so I'll say I have 9ft square of trees.  NOT BAD, if I do say so myself, which I just did.  I do like the way that the CDs seem to cover more area than if I had just based all the trees individually.

Dai asked about some conifers and I answered I had the problem already solved (well 'problem' is a strong word for anything in a wargame blog) in that a looooong while ago I invested in some of the  Battlefield in a Box Pine woods  during my Flames of War days.  In fact, I bought these so long ago it was before they reduced the amount you got in the box (it's less now, the sneaky devils, I think when I bought it you got 4 bases versus 2).  I still use the bases on occasion but since they are large and rigid don't get out a lot.  But with those I have a modest assortment of lone tall pine trees and small ones grouped together that go well with 15mm figures, and these trees are really durable and have stood up well over time.

Put that wood away...

And because I am super-nerd-wargamer-genius, how to store the things was always part of the plan, so each has it's own tub from Target...

This completes the Tree project.  Thanks for reading and comments appreciated.