I've finally completed the ruins I was making for Lord of the Rings.  It was a fun project, but here at the end I feel like it was a lot of effort for a game I haven't played in over 5 years...


If you are so inclined, you can check out the previous posts on this project..
Part 1
Part 2
Part 3

When Only a Grey Dry Brush will do.. 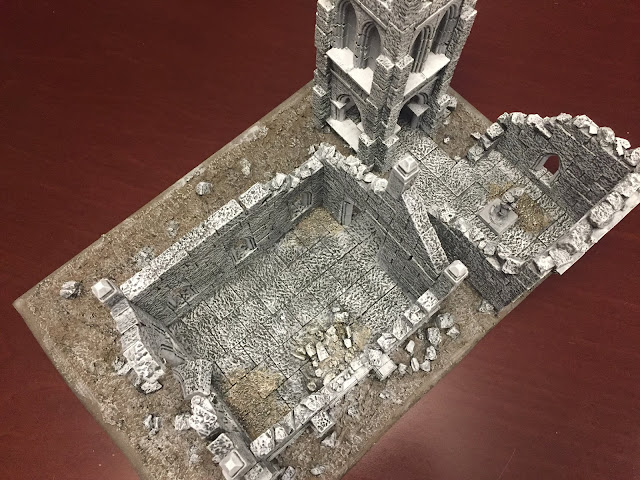 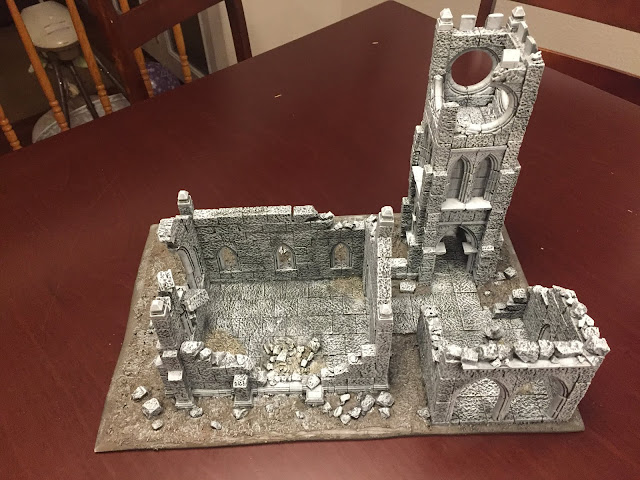 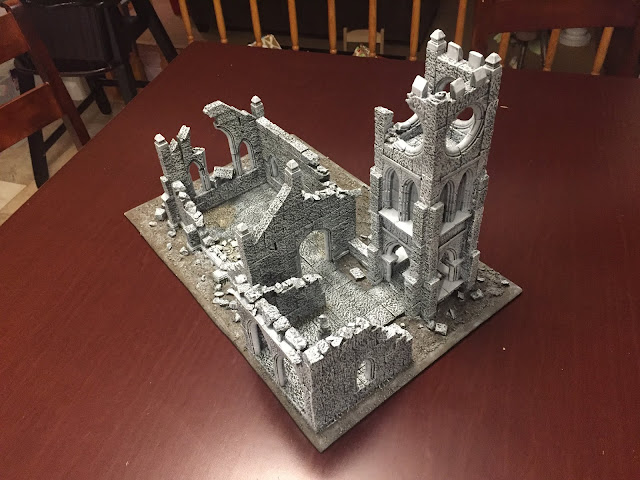 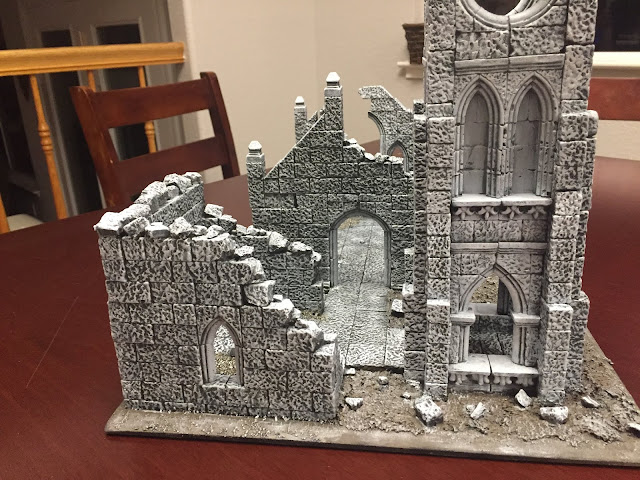 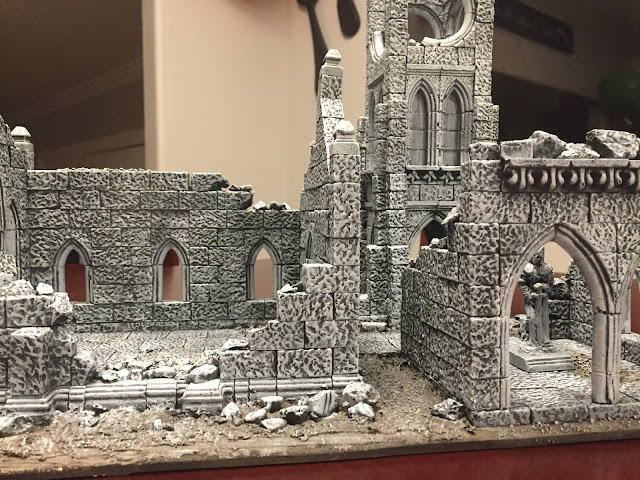 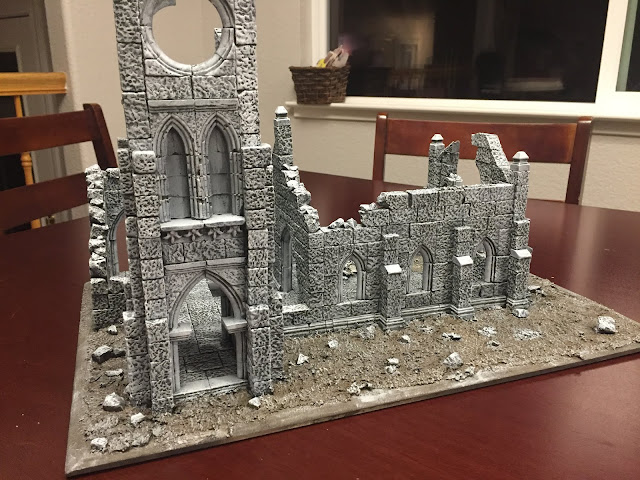 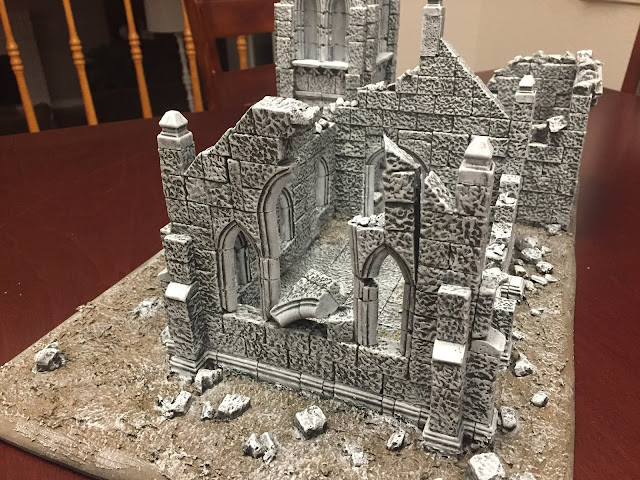 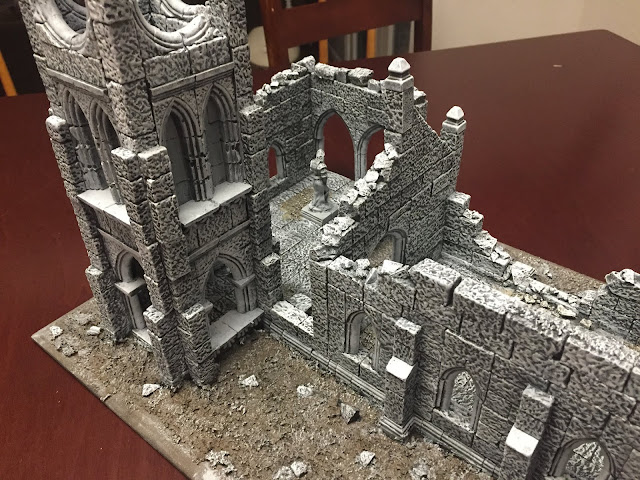 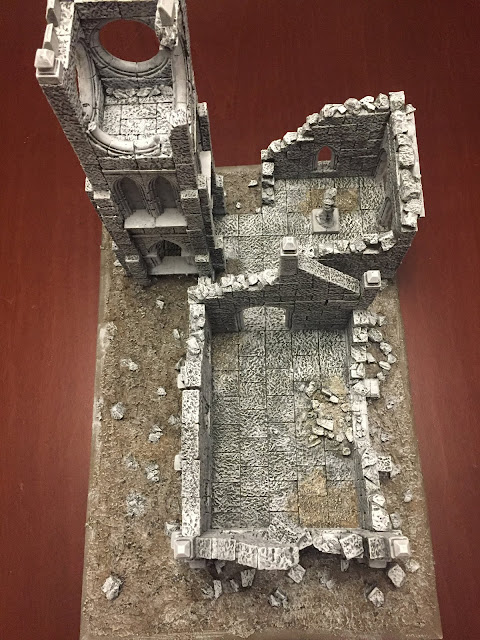 Taddaaa!  This thing was painted by priming it all black and really just dry brushing shades of greys all over it, but not 50 shades of gray; a dark, medium, and light, and then white.  Here and there on rubble piles and such there is a brown wash.  The ground around the ruin was painted with a grey-brown color and greys dry brushed on that, with the rubble picked out with the same process of the ruin walls.  The top half of the tower and the statue and now glued into place as well.

It was a LOT of dry brushing.  And there a few places that it was hard to get a brush onto, like the inside of windows and narrow hallways.

Overall, I think it came out looking pretty darn good.  And honestly I am more than a little proud of it.  This is the biggest terrain project that I have ever tried and the first time using a MDF base.


So How is that Whole Osigiliath game board coming then....


Long ago, when I was more into Lord of the Rings gaming, I had an idea that I was gonna do a whole game board based on the location of Osigiliath in Middle Earth.  Because it sounded cool.  This project has been going on for years now, and it's only the new release of the Lord of the Rings by GW that re-lit my interest in the lands of make believe after being dormant for awhile.  I think that's one of the joys of this hobby, that a project can be put down and picked up again.

Wanting to see how this project as a whole was coming along, and to compare the old terrain pieces that I have over the years to the brand new super shiny my favorite terrain piece ever that I had just made; I pulled out and placed all the Osigiliath ruins on the kitchen table and then stood back and took a good look.

I then went crazy with taking pictures... 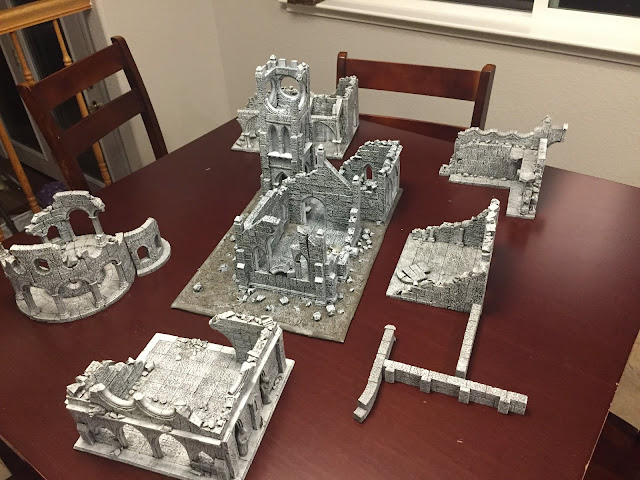 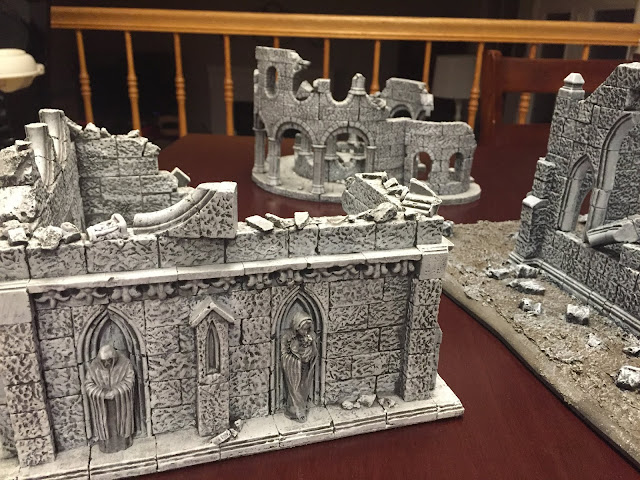 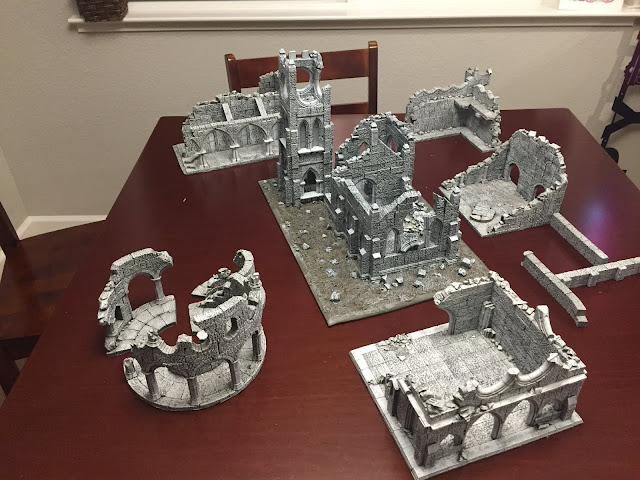 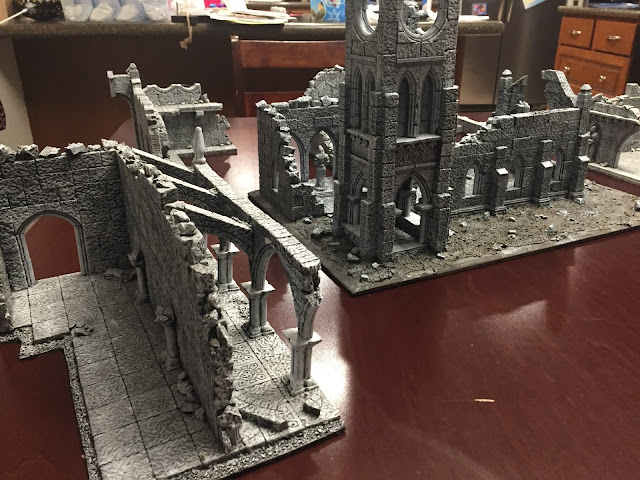 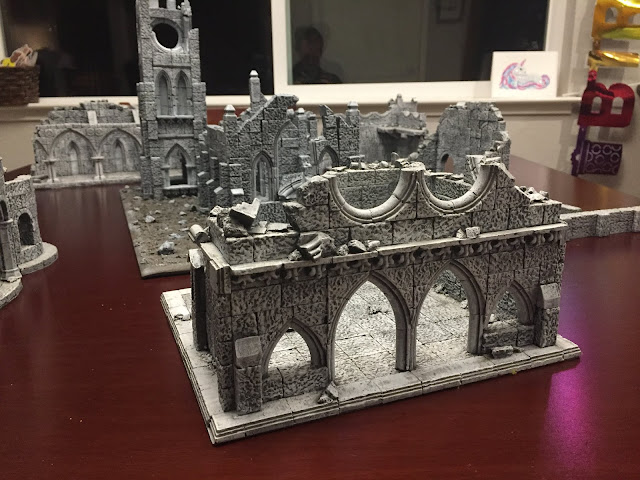 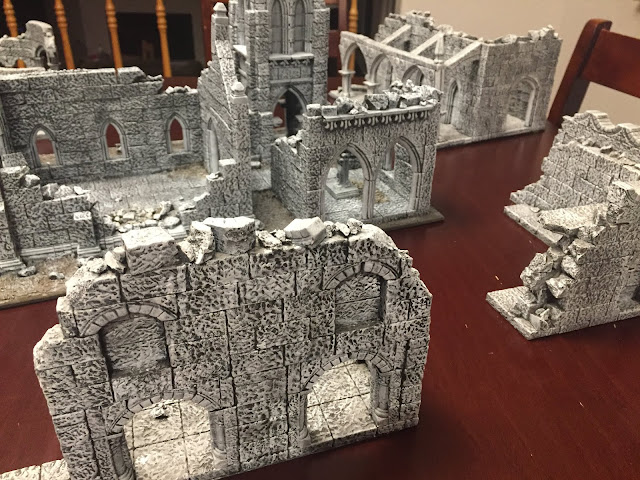 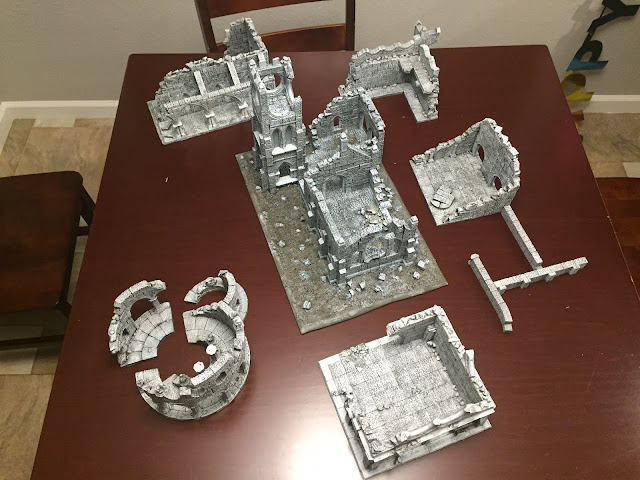 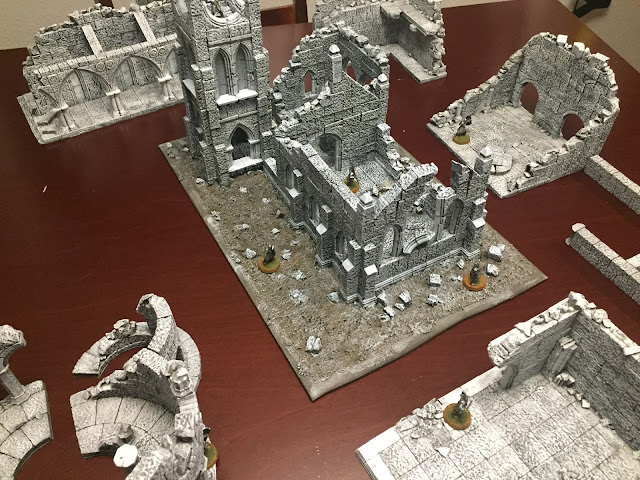 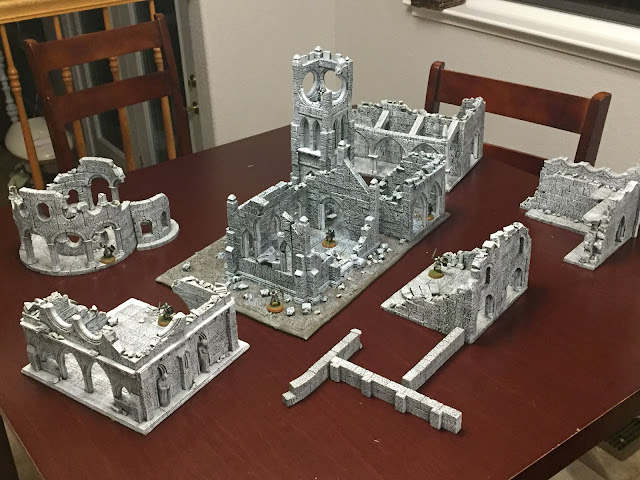 Overall I am very pleased with the effect, even on the brown wood table the terrain gives the impression of gray ruins.  Which is what I want; when you watch the movies the scenes that take place in Osigiliath are primarily colored with greys, dark browns, and whites.

The kitchen  table is just shy of 3x3, and Lord of the Rings is typically played on a 4x4 or a 4x6.  So a few more terrain pieces will be needed just to cover the table.  I think the addition of the MDF base REALLY works well and I'll likely do this from now on.  It'll give more opportunities to play with power tools!


I'll also need a grayish table cover.  I could make one of course, but I am tempted by some matts from Cigar Box like the Town Square or the Dungeon Floor that will just be easier to buy rather than make; but it's hard to make a purchase sight unseen.  Also I don't know if I want to spend that much money for a very specific genre that might not be used that much.


I'd also want to rebase all my existing troops on gray brown rubble bases instead of the ubiquitous grass and shrubs.  But that is close to madness!  That's because I  have megalomaniac dreams of taking this all to a wargame convention and finally being that cool guy with the really awesome table that everyone wants to take pictures of.  Ahhhhh, simple dreams.


For now though on the Lord of the Rings front, my motivation is low.  This last ruin was a fun project, it was something different, I got better at making some terrain and learned some skills, but man was it labor intensive. That's probably in the nature of the HA molds. And it took longer than I thought it would, though there were some family stuff and holidays that took away from hobby time.  Conversely, at the same time I got to brain storming ideas for the next LoTR project.  But for now, all this goes back into storage at the back of the garage.  Maybe to chipped away at again and again over the years.  I'll also need to think of some better storage ideas.


I think for LoTR, I first should probably play a game of it in order to renew my motivation.


Thanks for reading and comments!