Some minor ACW terrain, some gaming..

Due to busy family life I set about putting some easier-to-complete-but-still vital projects onto the hobby desk.  Some bits of terrain to enhance the ACW games.

Back in the beginning of the year I received my order for 2 packs of field works from Battlefield Terrain Concepts. I think I got the HW2 and HW3 sets shown on the link there.  These hasty works can be used in a variety of ACW scenarios, the big famous ones being Little Round Top and the Cornfield at Antietam.  Actually, these piles of earth and logs were the last bit needed to have all the terrain complete for a Brigade Fire and Fury scenario I'm working on.  SO GO ME for completing them. 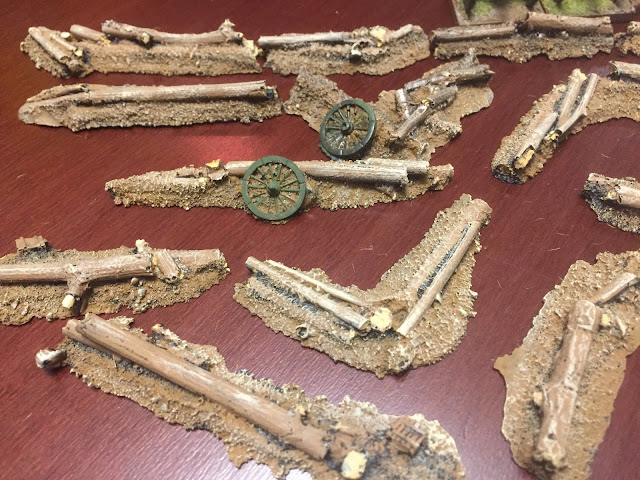 I also made another set of plowed fields for the ACW battlefields.  The idea being that these two pieces match up, and can be used as 2 smaller fields on different spots on the table or put together to make a larger one; whatever is needed by the scenario.

The process of doing this is outlined HERE.    The only new step I added was to lay out some fences on the corduroy fabric first so that I knew the length and width of the field would correspond with my fences.  Let's call that Wargaming Synergy. 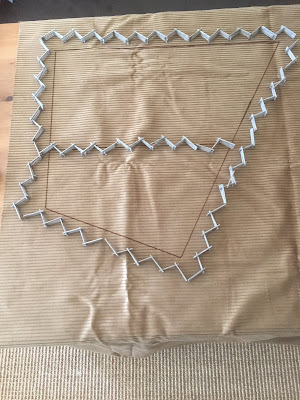 Then the usual process of spray paint brown, add flock in rows and some paint. 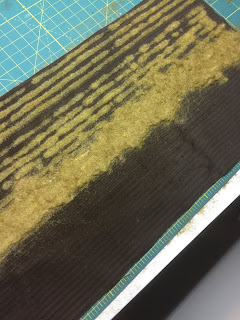 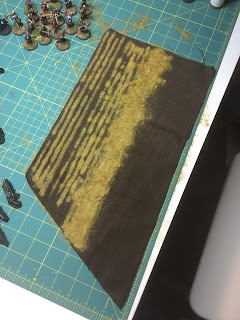 Oh, the slight curling at the edges is easily fixed with some duck tape along the bottom.


A Morning for just for Me(eples.)

My buddy Mr. G invited me over for a boardgame day, and the fates aligned as that weekend daughter #1 was at her grandparents, leaving us only with baby Son #2 and a lot less to do.  So I was able to head over in the morning from around 10 AM to 4 or 5 ish.  We were also joined by two other friendly gamers that I've met before so 4 of us total.

Someone had gone ALL IN on some Kickstarter for game called "Rising Sun", so we played that first: 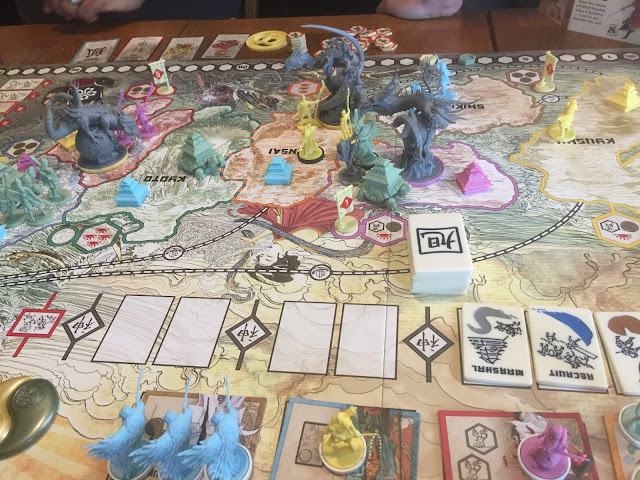 It's one of those 'Somewhat complicated and takes awhile to play' board games that I  DO like so much.  As everyone else had played once before I watched some videos on youtube on the set up and game play to prep myself while I was exercising at the gym (because I do that now like I used to then; all things old are new again, or so I want to feel that way).  The idea is that as you war over Japan, you get the most victory points.

Still came in a distant last place; though in my defense I was operating on little sleep (Baby son #2 is still a baby after all and wakes up 2-3 times a night) and it turns out I'm a terrible strategist...
Nah, it's a fun game and I would like to play it again.    It just takes awhile to grasp the different synergies.  And the production values of the game are THROUGH the ROOF.

Then we played a light weight game called "Adventures!  the Temple of something-or-another-I- forget."    Which is a game that provides about a  45 min Indiana Jones temple adventure (like in the first 10 mins of Raiders of the Lost Ark.  Complete with walls that slowly close together to smash you and a giant boulder booby trap.   The idea is to get out of the temple with the most loot.  If your character dies, you get one replacement.

This game I won, simply by running straight through the temple and only stopping for the easiest loot, and that everyone else DIED.  Turns out I am a brilliant strategist after all.... 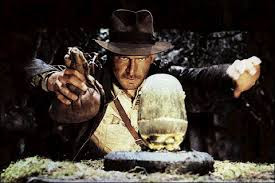