June is rather a busy month, with daughter #1's birthday, an annual visit from in-laws that hail from the east coast and come stay with us, and of course Father's day weekend.  All this does not leave much free time or weekends available for wargaming.  So instead a I picked up the HC Shield Wall supplement as something to read because I like wargaming the dark ages.  There is not a lot of info available online about this book, so as a service to others (and because I need something to blog about); here are my own thoughts.

Overall summary upfront:  Book is decidedly 'meh.'  Over priced for what it is, and while it does have some good stuff inside it could be half as long for half the price.... read on for deeper thoughts.  This book is the first of a 2 volume set.  This one covers the years 400-1000, and the next is 1000 - I don't care.  Plenty of nice pictures as well, but no one will ever convince me that the old Wargames Factory miniatures are worth anything.  Even painted up really well with awesome scenery those figures just look terrible.

And why yes, I did have a good Father's day weekend.  I hope you did too.  In fact I got my man card punched twice if you know what I mean.

I mean I got two yard projects done.  Nothing more manly than using a shovel, rake, and bags of dirt and mulch. 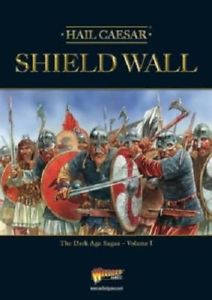 The book is pretty big and broken into sections which are basically The Introduction, general info about the early medieval time period (what we all like to call the Dark Ages, wrong that we are to do so, but I'll continue to do so because it sounds cooler..), and then some potted history of time periods 400-600, 600-800, and 800-1000.  Also some skirmish rules, then some HC rule adjustments, 12 "scenarios," and army lists.

My first quibble:  WHY NO HASTINGS?
Most people mark the end of the viking age with Battle of Hastings (in the year 1066 just in case you don't know) and could of easily been included in this book.  It'll be in the second for sure.  Ending the first book at the year 1000 seems either arbitrary or a shameless strategy to get me to buy both books just to complete the viking age.  We shall see.

The intro is nice, and has a good attitude of "hope this stuff is helpful, use what you like and ignore or change what you don't."

The 'potted histories' are not badly written as far as potted histories go.  If you already know something about the time period you won't find anything new, but that's to be expected.  What is nice is that you also don't find anything too egregious either.  There are decent sections on the Saxon Migration (years 400-600, or the Age of Author as some would say) and then the period when the Saxon "nations" fought each other over and over and over for supremacy in the years 600 - 800 ish.      What is given short shift is the history of the Viking Age (800 - 1066), which is only about half a page.

At the end of the potted history section of the Saxon Migration, the author says that mass battles didn't really happen in that time frame and instead presents amendments to the HC rules to make it play like a skirmish game (ie, instead of using units you use individual figures) to represent the 'warband' style of conflict common in that age.  Even though later on in the book there is a mass battle scenario for Mount Baddon which happened sometime close to the year 500....

The skirmish rules themselves are alright.  It's HC with some concepts from Lord of the Rings Strategy Battle Game, and the author admits the rules are somewhat incomplete.  I guess you would play these rules if you just really loved the HC rules above all other rule sets... but there are lots of skirmish rule sets for the Dark Ages that are better.

I can't figure why these were even included other than padding the length of the book.  HC is a mass battle game, I bought it to play mass battles with hundreds of figures, and that's what HC does well.  If I was interested in a skirmish game then I'd be using a different rule set.  I don't think anyone is going "I can finally use HC to play with just 20 figures a side!!!!" 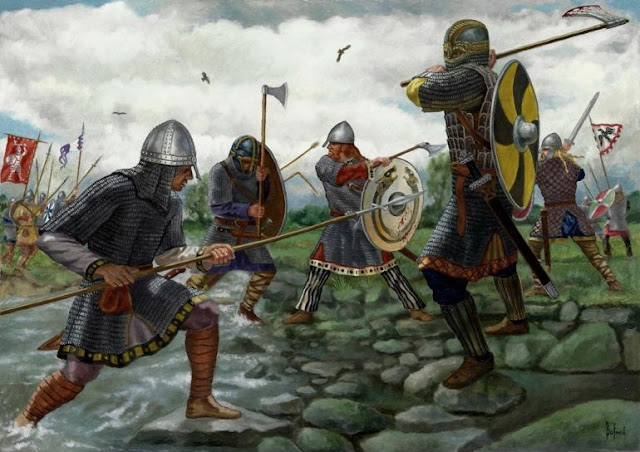 HC tailored to the Dark Ages

Next, there are a few pages (And I do mean a few) of suggestions of how to tailor HC to dark age combat.  Again, the attitude is "use what you like" which is appropriate.  As I said in the previous post, I like the Shield Wall rule.  It's better than closed ranks and any house rule that I could think of.  The rest of the rule suggestions are so-so.  There's a bit about reducing the command stat if you think that's appropriate (I don't;  that will slow the game down too much); a bit about how commanders should stay attached to a unit throughout the game (even when rallying another unit) which makes a 'follow me' order more successful, a suggestion that games don't go over 6 or 7 turns total, rules for fighting in a building or behind a barricade, and other stuff.

IF all you want out of the supplement are these 3-4 pages, and I wouldn't blame you, then I'd use the google image search to see the pages and save them to your computer.

One thing missing is the 'mixed unit' rules presented in the main HC rule book and in the previous army book; The mixed unit rule reflects that the better armed and armored men were in front of the shield wall and the less so in the rear; so instead of having a unit of Hirdmen and a unit of Bondi instead you get units made of both mixed together.   I don't know if the author just didn't like that rule or thought it was already adequately covered, but seems remiss not to even mention it.

Next come 12 historical scenarios that occur over 600 years of history.  I think the author had a real challenge here since we really don't know very much at all about how combat was done during this time, what the armies were like, where a battle actually took place, etc...we just don't have a lot of info.  There's also only so many interesting ways that two shield walls can come together.   The author acknowledges this and I'm geared up to give a bunch of leeway on this section.   However, I was still mostly disappointed....

First off, the back of the book says 'linked scenarios' and ''campaign rules' and this is just false.  What is presented is a paragraph about earning points based on how each battle comes out and the winner is the one at the end with the most points.  Stuff like: 5 points for winning, 5 points for killing the enemy general, etc..  The actual scenarios have nothing to do with each other; winning or loosing one does not affect the other.  I would not call these linked in any way.  I was hoping for something more like the TooFatLardies campaign supplements for SP2 and CoC; where the casualties of one battle would affect the next.

The 12 historical scenarios themselves are alright.  Each has a small description, a very basic map showing deployments, terrain rules.. and that's about all.  only 1 scenario (battle of Ashtown) follows the familiar Warlord Games pattern of giving an OOB, and a "how it played out" narrative.  Which makes me suspect that Ashtown was the only scenario play tested.  On the other hand, I found those "how it played" narratives in the HC rulebook to be useless so overall that's a plus.

I feel like the author missed an opportunity here:  While acknowledging that there is a real lack of info on dark age battles the author could of added suggested OOBs of what he just thought would be a good / interesting game.  Because a nicely flushed out scenario is way more useful and nice than skirmish rules and potted history.  The scenario maps also have no scale attached to them, so you don't know if the table is a 4x6, 6x8, 6x10, or whatever.....also the book never says how big the units were in his games which I think would be helpful to know.  I know you can make the units as big as you want in HC, but I think it's nice to provide an example. 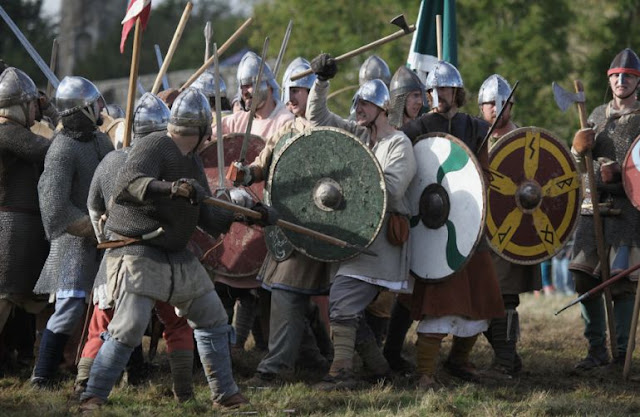 Next come a bunch of Army lists which are in the standard HC format presented in the previous army books.  The author does say the lists are designed with it in mind that this period was more warband / small scale than later (or even earlier)  periods.  The author does not go on to say how this is achieved as the lists look extremely similar to the previous books to me, just a small thing tweaked here or there, but maybe I missed it.  Some units are exactly the same as in other books.   But overall these list present a good alternative army list.

There are lots of small errors throughout the book that distract from it's overall presentation. Some examples: There are a couple of army lists where units have incorrect point totals.  HC was never about the points, BUT if you provide point totals at least double check the math... it's simple addition!   In the battle of Ashtown scenario the terrain rules mention the river Thames but there's no river on the map.  In the battle of Edington scenario, the map shows the saxons attacking themselves and not the vikings...

I like the shield wall rule, which I knew everything about before I even bought the book.    The scenarios have some interesting ideas, as well as the general rules suggestions for tailoring HC to the dark ages.  The book has a nice tone and stance of "this is a tool kit to use how you like."
However, there's so much in this book that could of been better.

Overall, this book is like a movie where all the best parts are in the preview.  The parts that I was most interested in turned out to be rather flimsy.

Hope this will be helpful to others.