Of men and mountains (of lead).

halfway through the month and I've finally made it to a place where hobbying can begin again.  It took awhile to deconstruct Christmas at our house; and somehow we couldn't but all the holiday decorations back in the same number of  tubs we started with...funny how those things multiply when you let them out of the garage.... and as previously documented, the hobbyroom was converted to a bedroom while company was here, and when putting it back together it was a good time to do some additional house improvement tasks like adding some shelves to the walls and reorganise the closet.

and then everyone in the family had to take turns being sick...

but no matter, we're all on the mend now and it's time to take a break from playing Disney Princess Candyland with daughter number 1 (which is somehow a simplified version of the original candyland, though how it could be more simple I am stumped) to write a post about proper wargaming.

The Postman cometh, and the lead pile growth.

So while there hasn't been a lot of proper gaming in the new year, there has been a lot of packages arriving in the mail for little ol' me.  The end and beginning of the year tend to be a harvest season for me, because I am one of those lucky people whose birthday is right after Christmas, so I tend to get double gifts.  And through the years, I have trained my family and inlaws well....
First to FINALLY arrive (I say finally because I got an email saying it shipped on December 5th and over a month later it showed up)  was the MW special on 1066. 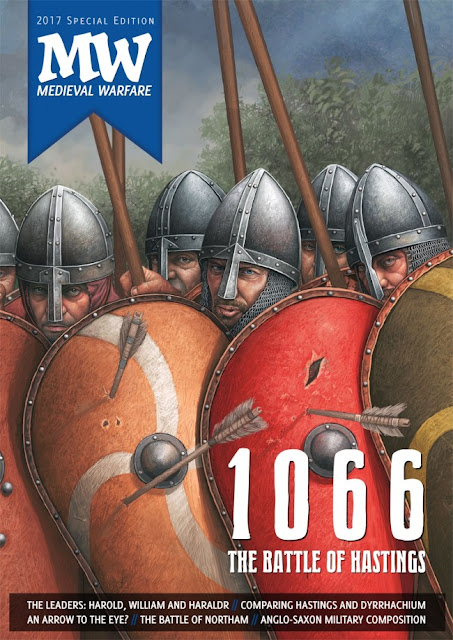 Quick side note: I was very disappointed in this issue.  Previous Specials have been great, but I found this one to be BORING, and you would think with 'battle of hastings' on the cover there would be more about the actual battle and at least a halfway decent map... Maybe it's because I already know about this subject that it's typical readers digest history was unimpressive...I dunno.  BUT it did remind me that I love  Dark Age battles.  I've often thought about doing a scenario based on Hastings but I need some more Norman infantry completed before it can seriously get off the ground...not to mention all those other Normans, Vikings, and Saxons.  Now where'd did I put them...

oh here they are, hiding in the drawers of the hobbydesk...


I shudder to think how many miniatures there are in those 2 pics just lying around waiting to be done.  Maybe one day I'll show photos of what dark age miniatures are painted so it won't seem so terrible in comparison.  But this brings me to an important point:

this is all wasted money.  Some of those sprues have been waiting around for years for me to get to them.  Now they serve as a warning about buying large amounts of miniatures at once.  DON'T DO IT!  you'll never paint them all before you go off unto another period /genre and then it's a waste.  Always factor into the price of a miniature the time it will take to paint and store it.  It's one thing to have large armies of painted figures that you can pull out and play with whenever; it's another thing to have a mountain of plastic and lead and a backlog of projects that you might get to 'one day.'
and people will tell themselves "well if I just focus on that one genre for the year I'll get it all done!!!"  and then we all laugh because that never happens....

These days I try to stick to smaller purchases so that piles like this are less likely to happen.

but those are old lead hills and this is about the post is supposed to be about  new stuff:

Next to arrive was some ACW terrain from Battlefield Terrain Concepts: 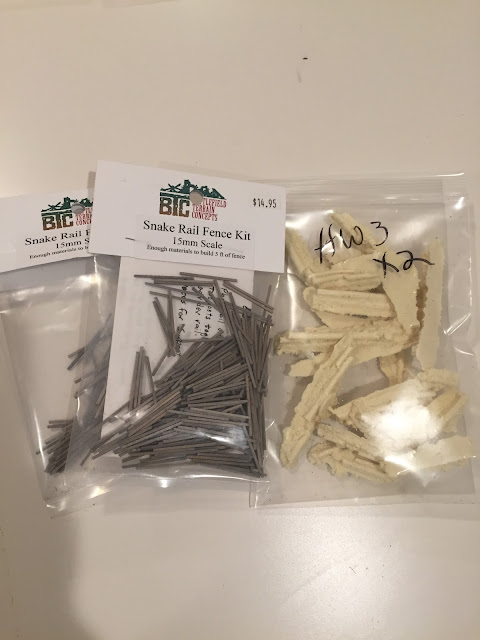 If I'm ever gonna do an ACW scenario on the Cornfield at Antietam or maybe Little Round Top I need some Hasty Works / quick entrenchments; so I got x2 of their HastyWorks sets of logs and earth as I thought that would work for almost anything, and it's good generic terrain.   I also got x2 of the 15mm Snake Rail Fence kits.  You can never have enough snake rail fences....NEVER!  and I like to build the fence myself because I like it to be a particular height  that I think looks nice with my ACW infantry.  Building the fence is not hard and I can do it while watching TV.


So Never mind what I just said; Here's another mountain...

There are of course, exceptions to all rules and here's one: gift cards.  Then it's NOT your money your wasting if you buy something and never paint it; and the company already has the cash so you might as well spend EVERY LAST penny.  This year my family and in-laws polled together and for Christmas and my birthday all chipped in for a gift card to Old Glory Miniatures.  Didn't I say they were all well trained?  (I might of dropped some hints to the wife, "you know where I'm getting a bunch of miniatures from?  Old Glory Miniatures.  Old Glory like the flag you know, that's Old Glory."  "Oh look, I got a package from Old Glory Miniatures last month and I really like the ACW figures from Old Glory.."

Anyway they all chipped in with an attitude of 'you're a sweet guy, go get yourself something nice..' and since I had an Old Glory Army Membership for an 40% off each pack I went ahead and just start putting my ACW wish list into the shopping cart until the total reached the gift card amount...and this is what arrived a little later


All of my ACW collection are from the Blue Moon range, and this order will round it out with a  grand total of:

So the ACW lead pile has gotten way bigger; in total with what I already had I now have the stock to add 80 more bases of infantry, 20 more command bases, 16 limbers, and a ton of assorted markers.