I love wargaming conventions.  I usually have anywhere from a blast to a 'very nice time.'  They're like weekend long vacations for me where I get a break from having to be responsible for anyone else, a chance to put all my toys out on a table and get some oohs and ahhs, and of course to get in a lot of games.   I usually allow myself to go to two conventions a year, one local so I at least appear to be home (and save on the hotel) and one that I travel to and stay in the hotel allowing for complete free-dom.


Let's talk a bit about wargame conventions and my plans. 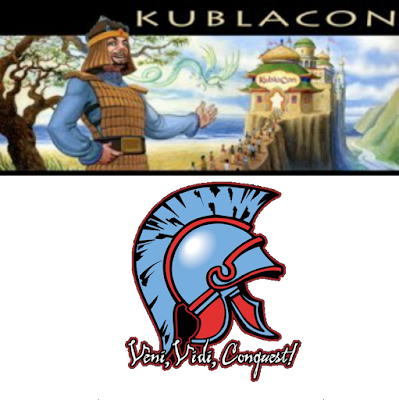 I had to miss my usual two wargame conventions due to them being too close to the birth of son #2, and it seemed bad timing to try and sneak away.    Conquest Sac is a small convention that is local to me and Kublacon is a HUGE convention that's in the bay area.  To be honest, Conquest Sac I can take or leave; I really only go because it's a local con and any local con is a good con (and to be more fair, it is the best of the local cons).  But I do feel like I  missed out in not going to Kublacon.  I guess having a new baby is more important than playing in Jay's HUGE WATERLOO GAME;  but the game is a very close second...

However, not one to give up I tricked the wife into watching the kids to allow these two alternative Wargame Conventions:  Midsummer Conquest at the end of July and Pacificon at the end of August.  Confirmed with days off from work and everything.,,, 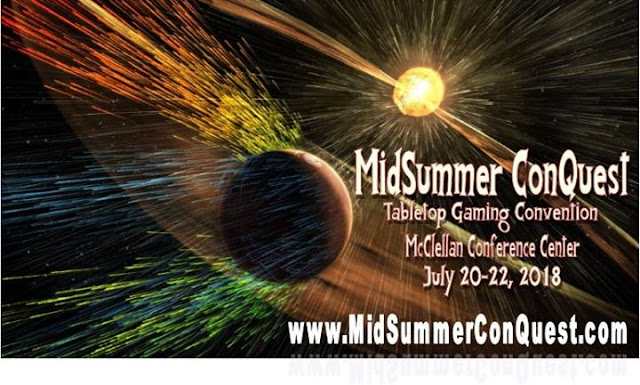 This is a Brand New local convention, running for the first time.  As I've mentioned, I like having local conventions because I feel it'll only gives me more options to game at some point, so I'm trying to support it.  There also might be potential bragging rights being able to state that I attended the first-one-ever.    However I don't have high hopes for the whole con experience.  Last time I checked the schedule for games being offered there were a whole 6, of which I am hosting 2.

Yep, I volunteered to run two small ACW games, because at the time I was surrounded by awesome ACW content on all the blogs I'm following and I made something of a snap judgement.  Since I am not expecting a large turnout of gamers, the ACW games I'm running are small 2 vs 2 games with small commands that could also be run 1 vs 1.  These are also very doable as I don't really have to produce/paint/make anything in order to put on the games, so pressure is off and anything I do make is just extra fun.  I thought that was 'a smart idea.'
One such game will be the scenario Caldwell Clears the Wheat field, which I have previous post about HERE.  Maybe if I get time I will remake the famous Wheat Field (so famous, that it gets capitalized).

This is the Wargame Convention that I'll travel to in the bay area, and room is already booked! This is over the Labor day Weekend, and probably around 2 ish hours away.  When I was living in the Bay Area I would attend this convention regularly, and haven't since moving to the Sacramento area, so I'm looking forward to attending.

Decisions and Decisions: Thoughts on how to decide which games to run for a convention.

I have not decided what to run at Pacificon, and I have to the end of July to officially submit something, and I'm day dreaming of the possibilities. Some thoughts of mine:

To Over commit or Not.

I want to put something on that I'm excited or passionate about, and will likely continue to be excited and passionate about 3 months from now.  I'm pretty much old enough now to know what I like but these do change over time and some interests wax and some wane.  It's also a known fact among gamers that nothing increases productivity like a deadline.  The more informed might call this "goal setting,"  but the idea is the same:  sign up to run a game that requires more than what you currently have prepared, so that you'll need to get it done by game day. Then when you reach your goal not only did you put on an awesome game but you increased your painted miniature collections.
But it can be very easy to take on too much by forgetting about the whole picture or not accurately accessing what you need, and then you find your're in over your head.  For example: let's say I'm thinking about doing a larger ACW game using Regimental Fire and Fury (best ACW rule set EVER!) then I'll likely need more USA and CSA infantry bases, more command stands for both, do I have enough terrain (especially snake rail fence) and markers!  everyone forgets about markers.  Every regiment in RFF has the potential to be marked as 'low on ammo' and 'disordered.'  If there are 40 regiments on the table, how many markers do I really need? (probably around 30 or each).

I'm also thinking I might try hosting a game Post Captain.  I think an ideal game of PC would be 4 players with 2 ships each.  Which means I'd need 2 more ships which sounds easily enough to do in 3 months.  But I'd also want to use some cool fallen mast markers (for the inevitable falling mast, have you ever seen an AoS game where a mast didn't fall?)  instead of the plain toothpick that I use now.  I'd have to make these markers which might take extra long because I really don't know what I am doing.  plus, they might look like crap.

I'm thinking it's too much to commit to BOTH of those, so one will have to win out over the other.

To Transport and Set Up, and to Tear Down.

I'm a one man band when it comes to putting on games at a wargame convention, due to the fact that I'm hard to get along with from poor social skills.  So I got to carry and set up all the game stuff on my lonesome.  Since I don't want to spend 3 hours setting up and putting away a game this naturally means there's a limit on how big a game I can to put on.  There's also a limit to the number of players I can comfortable handle that ensures everyone is having fun.  This trends toward a max of 6 players, and a manageable table size of around 5 x 6 when using 15/18mm.  Table gets bigger when doing 28mm bc they take up so much more room.

I also don't want to spend 3 hours packing and unpacking the car; meaning it makes sense to be consistent in the size / scale of any games I'm going to offer.  It'd be a lot of work for example to pack all the stuff for RFF ACW game in 15/18mm and all the stuff for a Hail Caesar Dark Ages game in 28mm.  The more stuff you bring the more likely that you'll forget something.

I dunno about you, but after 2 days of gaming and multiple rule sets combined with being over caffeinated, lack of sleep, and probably some alcohol; my brain gets tired.  If I'm putting on two games (which I usually do to get in free) then I find it easier to use the same rule system for both; requiring that I only need to know 1 set of rules from top to bottom.  Sometimes I even run the exact same game twice.  You might be smarter than me and able to do more.  My brain is tired just from writing this post.

I want my game to look cool.  I wanna show off a little bit.  A lot of work goes into painting  miniatures and making terrain.  I'm not talking 'best in show' or anything but it's very satisfying when people comment on how nice the game table looks.  So I want to do something that has a little bit of a 'wow factor.'

After you make those decisions, the next step is to pick which games / scenarios you actually want to run.

No, I'm not ready to decide, but I must soon.  Because If I need to produce some stuff for the game, NOW is a good time to start.  I'm tempted by 3 subjects right now:

Age of Sail with Post captain (will need fallen masts markers and 2 more ships)
ACW with Regimental Fire and Fury (depending on game size, might need nothing, but could be an opportunity to increase the size of the collection...try out a new scenario).
Dark Ages Mass Battle with Hail Caesar - my new shield wall supplement should be on it's way soon, and it's been awhile since I played with those toys....

Thanks for reading.  Comments appreciated; though I guess Blogger no longer alerts me with an email when a comment is left.  I'd say I might miss your comment but that'd be a lie, I live for comments.

Email ThisBlogThis!Share to TwitterShare to FacebookShare to Pinterest
Labels: opinion