So in a continued effort to put off painting anything miniature related  I decided to emBARK (hehehe) on another terrain project now that the fences are done; Woods / trees.  Because just like fences, you can never have enough trees. 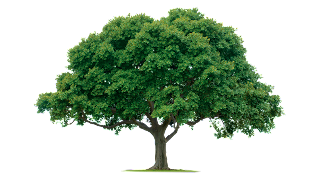 Actually this is something I've been meaning to do for awhile.  Many ACW battlefields have large areas dedicated to woods, and I just don't have enough trees prepared for the gaming table.  Also, I want something besides a whole TRUNK-load of individually based trees (hehehe, I did it again) because I don't want to have to place down or pick up the 30+ trees I would need.

Do Thy research and Make Thy Plan

I really like the way MadMac (see his blog in the blog roll) did his large forest area in this Pickett's Charge Bat Rep, I like his method of using some sort of ground cover to define the boundaries of the wooded area, because then the woods can be placed anywhere and in any shape that I want just by putting down the ground cover, and the trees within it can be moved as needed.  Theoretically at least I could model any battlefield I want without having to tailor make bases with pieces of felt or whatever.  I still might go that route eventually, but for the mean time the more generic and applicable to all settings the better.  With that in mind I went to the internet to do some more research  to steal more good ideas from others and discovered these:

As you can see; these gentlemen used CDs to make a large base holding a number of trees, and it looks pretty.  This seems to be a good idea, as then I can place down 10 CD bases with 3 trees each to make wooded areas rather than 30 separate trees.

SO the plan:  Find a ground cover material, use that to define the area / mark the boundaries of the woods, and place large bases of 3 trees and the singly based trees I already have to make it look pretty.

For the ground cover, I grabbed a tube of the Woodland Scenics ground cover "Earth Blend "  because it looked to be the right color for woods I was going for:  a sort of brown-green different enough from the wargame mat mostly-green color.  The I gathered some old computer CDs that I've had for years and years and gathered my tree pile into one place.  WHAT?  I can't be the only one who had both a tree pile and a lead pile?  These are all Woodland Scenic premade trees around 3-5" high, as this looks right to me for 15mm.  I considered going through my old music CDs and using those, but then I thought it would be too embarrassing to show what music I listened too. 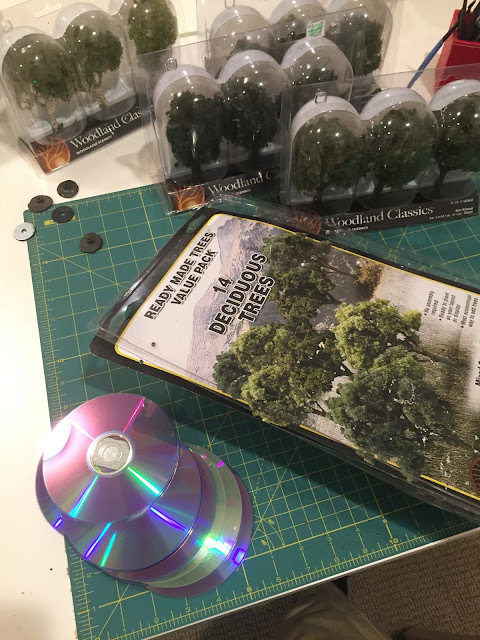 Not pictured: white foam board and the concrete patch that I use for basing.  I've used concrete patch instead of plaster because I like it's weight (it's heavy like, you know, concrete) and that it has a texture already so I can skip the step of gluing something like sand to the plaster to make texture.

let's begin:  I will LEAF nothing out (Ha!  the lame jokes continue).

1) I took a hobby knife and cut out pieces of white board (or foam board, whatever you want to call it) to the size I wanted, and used the knife to angle to edges to 45 degress.  I'm using foam board to create the undulating ground as I think it's the right size for small elevations for 15/18mm figures.  It's also what I already had lying around AND I hate styrofoam.

2) I took the knife and also cut cross hatch patterns into the surface of the CDs just to give the glue and concrete patch something more to grip.  Not sure this step was necessary but I'm used to doing it all the time. 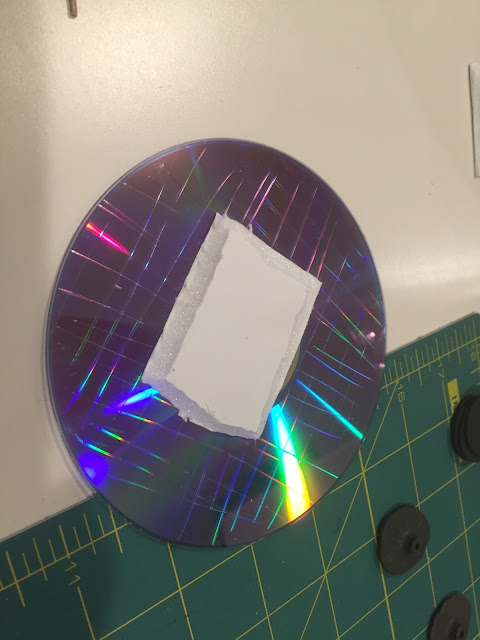 3) Using just normal PVA glue (elmer's white glue) I then glued the pieces of foam board and the tree bases (WS trees come in two parts, the truck, branches, leaves, and the small little base) to the CDs.  I put 3 tree bases per CD.


4) You know what's next, I put the concrete patch on the CDs.  Now, this took a little more effort / time than I thought it would.  Maybe because this CD is technically the biggest base I've ever used and wasn't completely level. 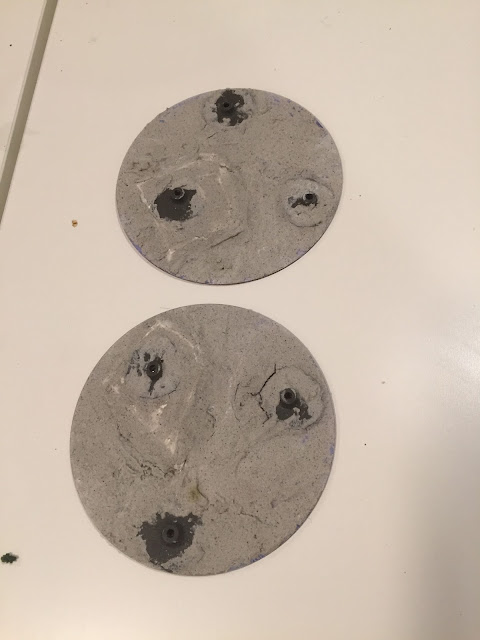 SO, I spread the concrete patch on 2 of the CDs and was reaching for a third when I remembered something important:  when doing a new project like this, It's a good idea to go through all the steps and make 1 or 2 prototypes before going into mass production.  That way, if something comes up / doesn't quite work in the process you can modify it easily on later items instead of being stuck.  I did the same thing when I made the corn bases and was glad as I was able to get the colors right.
So I stopped adding the concrete patch and went forward with just these 2 bases till completion.

5) Let the bases dry, then one day when there is a 30min break in the rainy weather, prime black with spray paint primer.  let dry.

6) paint and dry brush with whatever basing colors you use.  My basing paint scheme is usually Vallejo Flat Earth and dry brushed with Iraqi Sand.

7) I mixed some of the ground cover flock with some of the wargame mat flock to (hopefully) create a mid tone... and add where you want, especially in places where you messed up dry brushing...

Here's where I hit a snag...and glad that I've followed my own advice.  The first CD went together well enough but on the second, there was just no way that 3 trees were going to fit where I had the bases.  They were too close together.  Looking at the other 8 CDs I saw that this might be a consistent problem, so I went back with some wire cutters and took off the tree bases on the other CDs and re-glued them on again, this time with just 2 bases per CD.  This way there won't be an issue in the future, and it was a relatively easy fix because I hadn't put down the patch, paint, and flock yet.  Whew.

So that's 2 CDs done.  8 more to go.  I also now have about 8 trees without a home, so I've decided that I'll base these singly.  This project is kinda large and takes up my hobby desk, so I think I'll need to focus on this until it's done before moving on to something else.

That's it for now.

Thanks for reading and appreciate comments!
Posted by Stew at 8:07 AM