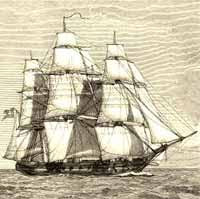 on December 30th, the SHMWClub had an AoS game hosted by Mr. W, and I was actually able to attend!  I was very motivated to because 1) it's an AoS game and I love'em and 2) even though I've been a part of this club for like 6 months I've never attended any club function.  So I wanted to go and meet some new people and see and be seen by others so I'm not just a name on the email list....

(even then, it was a close run thing as Daughter #1 got invited to a bday party for that day and the wife started to cough / display symptoms of sickness a day or 2 before...)

Turns out that I knew 3 of the six other people there, was greeted warmly, and was immediately recruited onto the French team due to (i'm assuming), my daring-do, my panache, and my love of strong cheeses and pastries.

The Game set up:

I believe the rules were "close action; Serpent of the Seas" modified to NOT use hexes.  The ships were 1/2400 scale I believe; they were small.

The Host of the game had a very historical situation set in the late 18 century during the Quasi-war that I will now distill down to the brass tacks and iron cannon balls: a French coastal city in the Caribbean has been taken over by the local dirty peasants who have over thrown their rightful French rulers AND to make things worse; taken over the shore batteries.  A squadron of American ships blockades the port to deter any glorious French reinforcements.  My mates and I played the part of the glorious French reinforcements.  The objectives: silence all the batteries in order to land boats full of stunning French Marines to secure the town.  the main Objective is to secure the town; sinking or getting the cowardly American ships to strike are of secondary importance.

These were not Ships of the Line.  The French has mostly corvettes (smaller than frigates) and sloops (smaller than corvettes) and 2 or 3 light frigates.  I had 2 corvettes.  I'm not sure what the Americans had in total but they the did have the Constitution, a heavy frigate and the best in the world, able to outgun and out sail of our light frigates put together....

The rules used simultaneous movement, which is great for surprise maneuvers but hard for ships to sail in line ahead, so things became confused quickly!

Paying attention to what I was doing more than anyone else; and I basically followed the plan of attack because i can always be counted on to follow orders!

My first ship, the 'Diligente'  a small corvette in the lead of the leeward squadron tried to run behind some Americans but got caught by some surprise moves by the dastardly enemy and wound up heavily damaged.  It did carry out the plan and fired one broadside at the far battery before striking due to her damage.  I'm going to call that the 'learning curve' ship and highlights something I think is important in AoS games: give people 2 ships!  that way, when 1 is taken out of the fight either by big mistakes or (un)lucky damage rolls, then there's still one to play with.

My second ship (3rd in line in the windward squadron) the "Berceau" was more successful.  I ran down the coast keeping the weather gauge, and pulled off a neat move; the Americans trying to block the move couldn;t as they had to turn into the wind.  I was able to fire a raking broadside at the amateur Americans and fire at the coastal battery before continuing into the harbor.

The shore batteries, being manned by unskilled rebels, weren't much of a threat but were able to do minor damage with each shot. I stood off just outside the harbor and engaged the battery defending there before attempting to launch my boat full of glorious marines.  I was chased into the harbor by an American ship and it was an uneven match; he was doing about x2 the damage to me than I was to him; I tacked in the harbor and he followed... 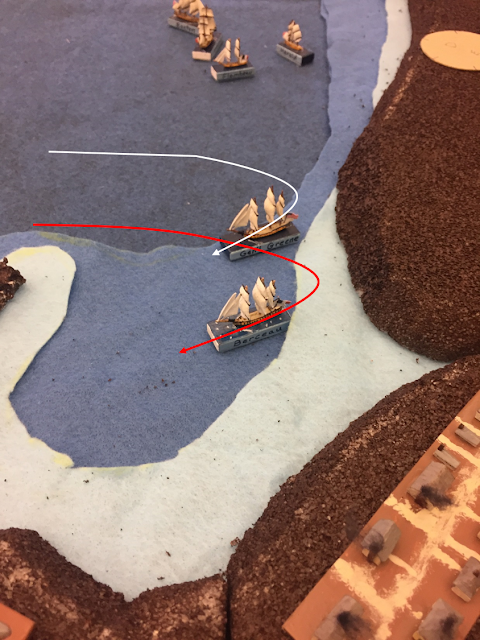 and that was several hours of play and that's where we called the game as people had to leave.
French lose as we failed to take the town, but we did silence 2 batteries and the 3rd was juuuuuust about to be abandoned.  I'll give myself a morale victory for sticking to the objective AND actually making it into the bay.


Overall: a very enjoyable game and I picked the rules up enough to do better next time.  Thanks Mr. W. for hosting it and I was glad to make an official club meeting.  It was nice meeting the new people.  Hopefully it won't be another 6 months before I am able to again!  really made me want to put my ships out on the table soon!