This Blog of Terrible Loss is 5 years old this month.  Happy blogging birthday.  Let's talk about Blogging in general and what you can get me in specific. 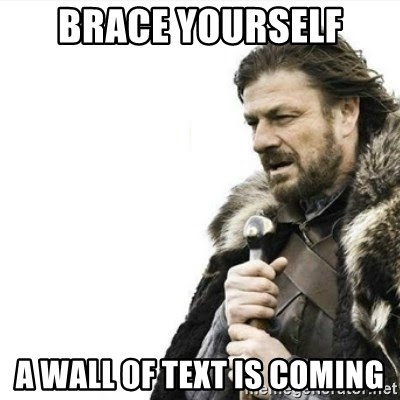 Ok, so it's not quite talking.  I'll type and you'll read but try to hear my voice in your head as you do and it will feel like talking.  I sound like a combination of Darth Vader and PeeWee Herman.

5 Years of This Nonsense

So I've been doing this for 5 years now which officially makes me an expert and perhaps, the best blogger ever.  I mean suuuure some blogs will post more often with better content and with less typos; but how many of them have a fun title like mine?

The problem with blogging is that the vast majority of blog posts are what I have come to call 'look-it posts.'  As in "Look it, I painted something."  or "Look it, I played a game."  or "Look it, I bought something."  These posts are the peanut butter and jelly of blog posts; meaning that it's an easy stable that everybody eats when there is nothing better (or no time to cook).  Even in my own blog there are mainly Look-It posts.  And Look-It posts, like peanut butter and jelly, are boring.

-Wait! that's obviously an inflammatory statement meant to raise engagement in what is otherwise boring text.  Read on, I'm going somewhere with this.

The reason there are so many mundane Look-it posts on a wargaming blogs is that it's reflective of what we do 90% of the time.  Buying things, painting them, and then playing with them.  And this not a bad thing, as it indicates a healthy hobby life.

But every once in a while, we do something really cool.  We put on that BIG game, we do a cool terrain tutorial, we write a scenario, do a excellent wargame review, or we write a hit song about our love of goldfish crackers or something like that.  These are some of the better blog posts because they demonstrate something, and are inherently more interesting.  These posts provide to the online community because the posts are informational and/or inspirational; becoming a resource for others.  Posts like these are what drew me to blogs in the first place.

I'm happy that I've done a couple of these over the years.  These posts also tend to get found more in google searches because they offer something that people are a looking for.  Over the last 5 years my top 5 most viewed posts are:

-The pattern? In-depth terrain construction and thoughts about wargaming rules.  Obviously no one in the wider internet really cares that I painted 10 Viking miniatures to a reasonable table standard.

These type of posts take a lot of effort to do.   The projects are large and the posts take forever to write. To continue our food analogy; these posts are the fancy meals, the Thanksgiving Dinner of blog posts.  And I'm proud of those posts (and others like them, there are a few).  They are entertaining, informative, and make me look good; if I do say so myself.

The kicker is: If my blog only had fancy meal posts the it might be a good resource, but blogging would not be very much fun.  As anyone who has made Thanksgiving Dinner (or any big fancy meal for a lot of people) can attest; It's a LOT of work, there is often swearing involved, usually a minor burn, and crying children.  All for the glorious presentation on the table and the meal is over in 40 mins with nothing left over but dirty dishes and general feeling of being dissatisfied.  And a tummy ache.

When I started blogging, I envisioned mostly doing fancy meal posts but quickly realized that if I stuck to those types of posts alone, there really wouldn't be much here.  There would be long periods of inactivity and no one would be able to tell if the blog was 'active' or gone 'dormant.'   It would be a nice resource for folks, but there wouldn't be much interaction.

And to be fair, It's not like any of those top 5 posts are jaw dropping-ly good.  I'm not really an expert in anything and all my posts take the tone of  "if this mook can do it, then you can to and probably better."  The only thing that I am consistently good at is falling asleep in bed at night while my wife talks to me.  I do it ALL the time.

I've said before that without some interaction, blogging would be too much like shouting into the void. 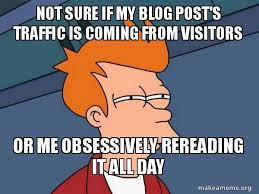 So I started to post more often on the mundane stuff.  The stuff I did 90% of the time.  It was easier for the blog to be 'active' (for me; 2-3 posts a months is about right).  Number of followers grew; currently at 93.  I never really know what that number signifies other than somebody liked something enough to click on the button.  Number of Blogging buddies grew and interaction increased and blogging was fun.  Turns out folks like Peanut Butter and Jelly.  Turns out I like Peanut Butter and Jelly.

As long as it's grape jelly, maybe strawberry.  Anything else is GROSS.  My wife likes raspberry and it's constant source of friction in my house.

A Loooooong time ago, before my life was dominated by children, I used to be a part of some wargaming clubs.  More over, I used to actually GO to the club meetings.  2 or 3 times a months really.  Not only would we play some games but people would bring their newly painted miniatures to show off and get ohs and awes.  If meeting in a game store people would make purchases and temp others to do the same.  While playing in one game you could wander over to people playing in another and gab for a bit.  You get the idea.

I'm still part of clubs but much more of a sideline / periphery member.  I hardly ever go to any meetings.  I'm more like a fun guest star and not in the regular cast; I'm the third in the threesome.
In a lot of ways, blogging has become my on-line club.  Especially with the little network of Best Blogging Buddies where we consistently follow each others blogs by writing comments.  There are about 10 people who regularly write a comment on any piece of shit post that I write; and I routinely write comments on their posts which are works of art.

With some of these guys; we've been doing this for YEARS.  years I say.   There's around 10 additional people who occasionally write a comment  on this blog when something strikes a cord or when life allows.  Therefore most of my posts have around 20 -30 ish comments on them (10-ish people writing a message and me replying.  I always reply, it's just good manners).
I think this is GREAT fun and provides that interaction that I no longer get from real life (for hobbys anyway). 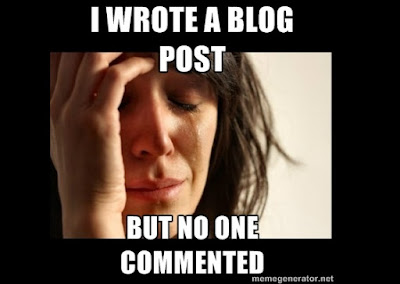 I'm not trying to say that this is a LOT or a LITTLE. I see plenty of other blogs that get way more comments and actually see scores of blogs that get waaaay less.  What I'm trying to say is that blogging has become a fun way to get little wargaming-themed bursts of Dopamine from nice people; because all comments are positive (all comments I write are meant to be positive).  I've never had anyone write a comment  saying something like 'your painting sucks and your terrain is trash and you should feel bad because your life is bad!"

Plus, when you follow someone's blog for awhile you do get a kinda-sorta sense of who they are as a real person; and over time they become less like strangers on the internet but more like online pen pals.  On line club members who are sharing some fun hobby stuff.  So when they post "hey look-it, I did this thing" My first thought is "Cool bro.  Nice job.  Your hobby stuff is aces and thanks for sharing."  because Peanut Butter and jelly is not boring depending on who you eat it with.  It's not the food, it's the company.  It's not boring at all.

But more importantly THANKS everyone who takes the time to interact, even sporadically.  I really appreciate it and more over, enjoy it.  I hope you also enjoy my lame attempts to be funny and interact on your blog.

That'd Be A Good Place to Wrap up the Post

But I won't!  Keep it going keep it going!  It's my goal that this will be the ONLY blog post you read tonight.  Or Skim.  or just laugh at the silly memes I pulled from the internet.
5 Years is a significant mile stone.  Now that we've talked about blogging in general lets bring up the uncomfortable subject of gifts, and what YOU can get me in specific....
You can write me a comment of course!  I just talked about how I liked them.  Just a line to say "nice job so far on this terrible blog.'  even if you haven't done so in a long time.  go on, do it.  Like and Subscribe, ring the bell, and that BS. 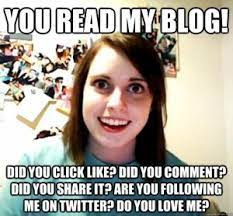 Or, if you really want to go above and beyond for this big occasion; write me a blog bump.
A blog bump is when you use your blog to highlight someone else's blog.  So that your audience can be directed over here to my blog and I CAN STEAL THEM.
But maybe that will increase the exposure of this Terrible Blog and I'll get a few more folks leaving comments regularly which will mean I'll leave comments on their posts and we'll all get a little more interaction.  Which should increase the fun for everyone. But don't feel like you have to,
--I don't want to come across that I am chasing comments or likes.  I do care a little bit as I just said I think it's fun; but I don't care so much that I'm up late at night worrying about my view count.  I also don't have any ads or monetary investment in this blog or some strange youtube-ish algorithm that I need to face.  But I will say that MOST of the people that have become Best Blogging Buddies / Online Club Members are the ones I have found mentioned on someone's blog I was already following.  The post went "hey check out so and so blog because he is ONE OF US."  And so I do.  I write a comment like "Hi, I wandered over here from X's blog.  Nice place you got here."  and they would reply "welcome to my parlor Fly" and so it begins.

Now It's Really Time to Stop

I agree.  Thanks for sticking with this long wall of text.  I hope it was thought provoking and entertaining.  I'll be back *soon* to say 'look-it, I painted some Vikings.'
Thanks for reading.
Double thanks for writing a comment.
Triple thanks if you do the BUMP.  Be sure to let me know so I send you flowers.
Posted by Stew at 3:20 PM