A rather long winded post about the ACW gaming

Since my ACW purchase and completing the latest CSA troops (see some previous posts HERE and HERE ) I have been itching to do some ACW gaming.  It’s been awhile.

Side note: Hosting games is hard
So I squeezed a game night into the schedule and invited people over; proving my earlier post about October being the beginning of the end of gaming for the year; for at first I had 5 players saying maybe, which all started to cancel,  and overall the number steadily declined to 2 (not counting me), of which 1 cancelled 15mins before game time….   Maybe this means I’m a terrible game host and no one wanted to come?  Maybe it’s because I serve gluten free pizza…. Maybe it's because while at home I game in the nude and do yoga stretches in-between turns...... But if I had known it’d be just me and Mr. L, I might have chosen a different game / scenario.  Oh well.

I’ve wanted to play the scenario ‘Caldwell clears the Wheat field’ from the Regimental Fire and Fury (RFF) scenario book for a while now.  It’s too bad that the second day of Gettysburg gets short shrift when it comes to press coverage, and most of that is given to little round top (Even though we all like Chamberlain).  but I mean cmon; the 2nd day assault by Longstreet on the salient created by Sickles was way larger and more dramatic than anything Pickett did, with the added bonus that Longstreet actually had a chance of victory.   The fighting into and around the wheat field has always been interesting to me.

The scenario is good for 4 players, and as you can tell from the title it focus on the counter attack of General Caldwell into the wheat field where the CSA have just broken through!  I also wanted to see if this would make a good convention game (I was originally planning on going to a local small con in November but plans since have changed).  It’s a small little game, only 3 x 4, about 65 stands each…

Here is the scenario map from the book.  Now some of the challenge of doing historically based scenarios is that you’ll need specific terrain items.  Like in this case, the wheat field, an oat field of a certain shape, and some streams.  All items I didn’t have, so in the week or two before the game this became my focus.

Setting up the Scenario:

What follows is how I set up ACW games.  I really like blog posts that go into details about how they create the games, and have gotten several tips and ideas from such posts.   So here I offer up for display ‘how I do it’ so if someone finds it helpful then that would be awesome.  ALSO!  If someone wants to offer up suggestions for improvements that would be… awesomer?   awesome again?  It’d be more awesome.  I also talk about minor things I would do differently next time.

For the Wheat field, I went with some teddy bear fur, mainly because I had it laying around from previous projects.   I don’t really love this teddy bear fur for fields but haven’t really found another suitable material yet…

Anyway, real easy, just draw and cut out the shape you want… 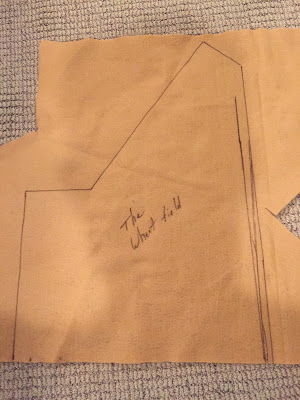 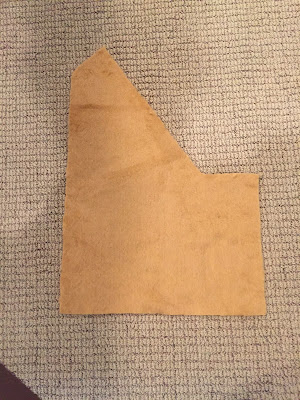 Or not so easy, as I did this backwards; as in I drew the shape that I wanted on the back side of the fur, so when I flipped it over I got the mirror image  : /    so I had to do it over again using smaller pieces which is why in other pics the wheat field is in two pieces….  While I was setting up the game I also made it a little small.  So sometime I’ll make it again and larger.

For the streams, I used a technique that I read about on the RFF forum.  You get some Acetate sheets and spray paint one side, and the other side shows the color but with a shiny gloss that water would have.  I got some Acetate sheets from Staples (they sell these in large packages of a hundred which are pricey, but if you go to the copy center they’ll sell you individual sheets).

You then cut the acetate sheets into little hotdog / sausage links and lay them down to make a stream in any fashion you like.  Then add bits of flock and what have you to make it look better and more like a stream rather than pieces of sausage shaped acetate.

I used brown because that’s what the example I had used, and I had brown paint already.  I don’t know if brown was the best choice actually.  It might be more realistic to have brown streams, but I think we’re trained to think blue when we think water.

For the oat field, I sacrificed an old brown towel, making sure to cut it correctly this time… and hit it a few times with spray paint to break up the textures.  I actually think this came out OK and now will be on the lookout for more appropriate colored towels…

And lastly the night before, I printed up all the troop labels that RFF uses, taped them onto bases, and organized them into commands for easy deployment. 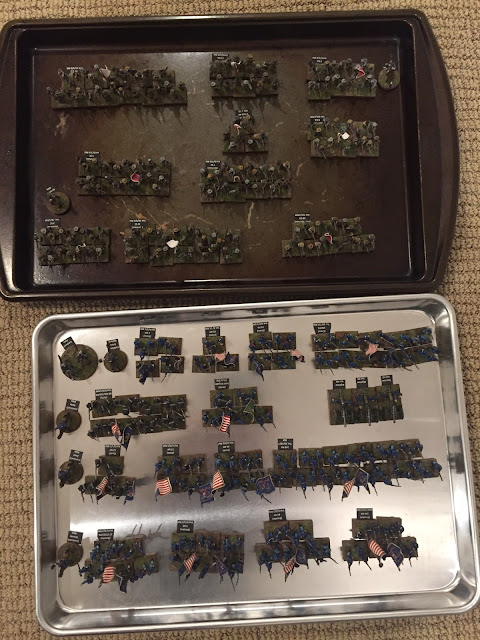 On With the Game Already

So the day off I went about building the board.  One of the main reasons I made wargaming matts is so that I can put hills underneath and lay the mat on top of it.  Theoretically this will enable me to create any geography that I like.  It doesn’t quite work perfectly, but overall it does the job.  Since 15/18mm ACW stands are very light, you don’t need to use to foam or hard materials to make the elevations like you would with metal 28mm figures / units.  So again I use a mixture of towels and old moving blankets.

Step 1!  mark out the game area with some tape, and lay down the towels and such where you think the elevations will go.  I like to pick a corner and go out from there adding hills as I go. 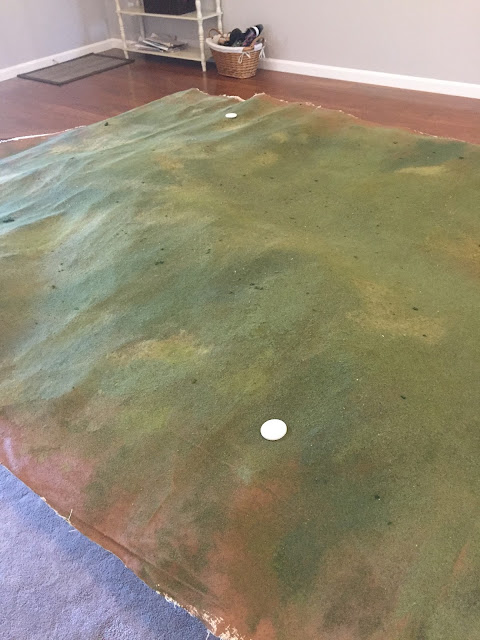 Step 2!  Lay you wargame mat over it, and press down firmly on the depressions.  I put some white poker chips down were the corners of the game area are. 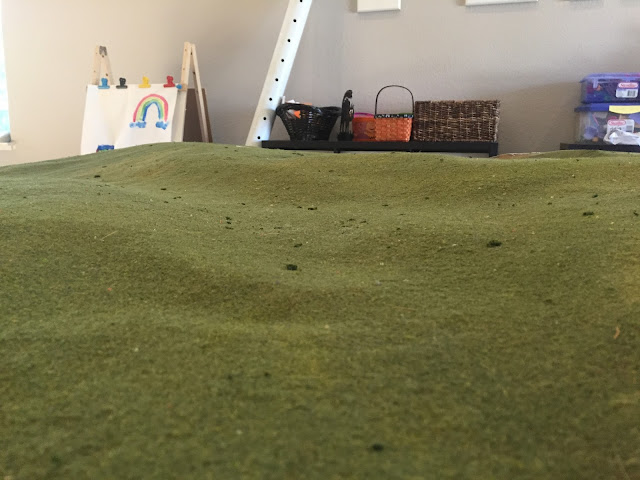 Pictures never really do a good job showing the elevations when taken from above, so here’s a shot from more eye level that really shows the elevations. 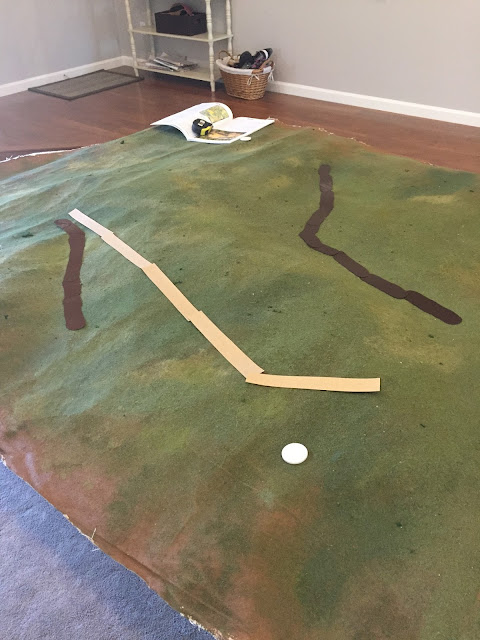 Step 3! Start laying down the major land marks and adding scenery.  Reach under the matt and pull the hills hither and thither as necessary.  Add first the things that are easy to pick up and those items that anchor the rest, in this case the road and streams.  Then the fields, fences, troops and trees and rocks (you put the trees and rocks on after the troops so you don’t have to move them to place units where they’re supposed to be).

Step 4! Guard you set up from curious little hands that want to touch everything and ruin it while at the same time instilling a love for wargaming.

However! There’s no way to have generic do all terrain and have an exact historical terrain.  So really the best we can hope for is a good-enough fit.  So let’s see how we did:

All this took over an hour to do, but that will decrease with practice effects.  The first time I did the Brawner’s farm scenario it took forever to set up but by the 5th time I had it down pretty quick.

So; here’s some more self indulgent shots of the set up…. 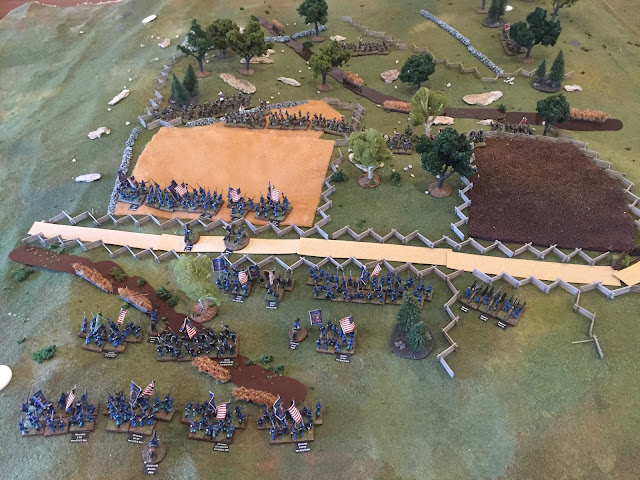 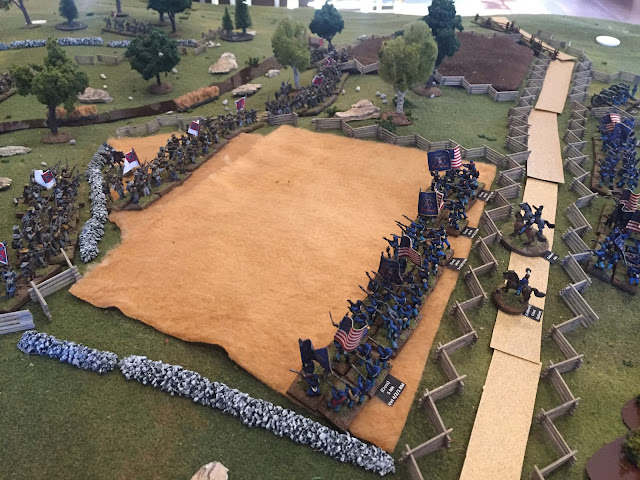 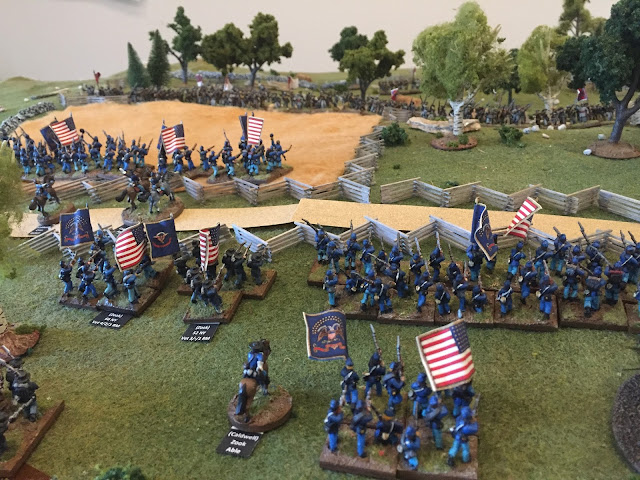 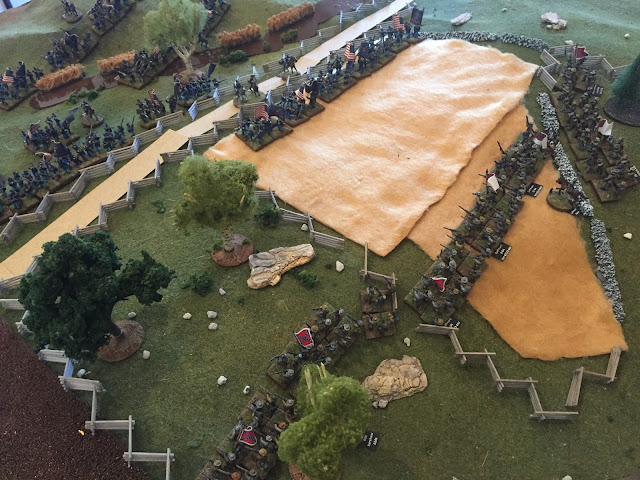 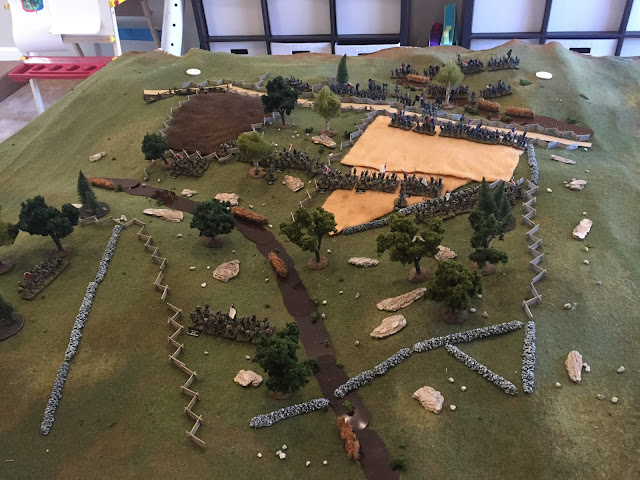 Game / battle report…On with it already.

So Mr. L took the CSA and I took the USA simply because there were 4 brigades on the union side versus 2 on the CSA.

The goal is for the Union to push the CSA out of the wheat field’s lower stone wall and off of the Stony hill (markers X, Y, and Z on the scenario map) for one victory condition, and another if the USA get a unit past the fence at V –W.  The CSA get the victory conditions if they hold it.  There’s also a victory condition of causing heavy casualties to the other side.  Game lasts 7 turns.

So I girded my lions and did my best impression of ‘relentless advance.’

Quick summary: The union succeeded in pushing  the CSA out of the wheat field past the stone wall, and withstood the CSA trying to push back into it; and in the end Luffman’s brigade was mostly broken units.  However,the Union never really succeeded in getting the rebels out of the woods on Stony Hill; just when they looked like they were going off they rallied and counter attacked.  The USA did succeed in inflicting heavy losses on the rebs without taking heavy losses themselves (though just barely).   So in total the USA had 1 victory point and the CSA had 2 for holding the field.  Rebel victory!

So I was playing and running the game so there aren’t too many pictures… that is something of a lie.

First half:  USA; General Cross (already in the Wheatfield) went straight toward the stone wall, while Zook’s brigade (behind and off the right) angled toward the Stony hill.  General Kelly moves to be in-between Zook and Cross, and General Brook comes onto the field with his brigade searching for a hole….  The CSA stand firm and bring up they’re two hindmost regiments and give a blistering fire to the advances Union troops

And basically a huge epic struggle ensues… (in 15mm)


Luffman’s rebel brigade is forced to fall back but Kershaw’s CSA brigade is bolstered by reinforcements and stalls the advance of the Union brigade under Zook on the Stony Hill.
Union Generals Cross and Kelly continue to face Luffman whose still dangerous, so can’t turn on the flank of Kershaw, who swings out a regiment in the USA wake to face the oncoming USA general Brooke; who gets thrown back like a fish too small to even be used as bait.


End phase:
due to losses, most of the CSA troops fighting in the Wheat field break and run, leaving the Union in charge of the field and the stone wall.  However Stony Hill is firmly in CSA hands.  the game is 7 turns long (represents 3.5 hours)


Thoughts on the scenario and wrap up..

That IS a fun scenario.  Took us about 4.5-5 hours to play, which is about right for a convention game in my book.  There is just enough maneuver to be interesting but it's really the bare minimum, and the action starts right away.

Improvements for next time:  the Wheat field needed to be about 2" bigger and the angle of the stone wall less steep.  More important: there is a 4" section of ground in the middle of Rose woods that is not wooded (see scenario map) that needs to be more obvious on the game table.  Lastly, in the pure scenario some units have smooth-bore muskets, which we all forgot about; probably just make every unit armed to rifle muskets to avoid confusion.


I'm likely to run this scenario (or at least one based largely on it) at a convention or again at my place.  If anything to practice setting out the terrain again.


Hope you enjoyed this long post!  Thanks for reading.