As stated before, I really like these rules, and one can read my review HERE.  And as I say in that review the only thing that annoys me is the crew management aspect.  Not that you have to manage the crew, that part I like, it's that the crew assignments use fractions, and everyone hates doing math with lots of fractions. Even simple math like addition and subtraction gets complicated when you throw in a .75 here and a  .50 there.  Plus, I want to run this game at a convention sometime, so imagine the math being done by over-caffeinated, perhaps slightly drunk, definitely hopped up on sugar, sleep deprived gamers.   Actually that description can apply to me nearly all the time....

Also I want a gamer to run 2 ships at a time, to minimize the effect of a lucky shot taking out a ship early in the game and leaving the player with not much to do.

Now usually I am not much of a tinkerer with rules, I tend to just play them as written and use common sense when needed, but in this case I see a need to be filled and felt inspired, so here goes:

(I know that this will only be of interest to a very small audience (those that have PC and those that hate fractions, imagine the Venn diagram! ), though still, read along if you wish for fun nautical terms.)


That's 5 fractions to keep track of; which is a lot.  Maybe you think I'm making too big deal of this and you're right; I'm not in a state of nerd rage or anything.  The rules are also specific in that the intention is NOT for the player to keep track of every crew factor every turn, but only when it's important.  However I've found through playing that it's important more times than you think.  There are some critical times when you have to decide; how many crew to work the guns (and which guns), how many to sail the ship, what are the marines doing (working guns or firing volleys), how many crew for repairs, boarding parties (though that is rare), complicated by subtracting losses of crew, marines, and gun boxes.  Yet there are several times when a ship will take a crew casualty in the Red phase, and the player must decide from which deck / task the loss come from, (the effect of the loss is applied immediately), which then will effect the blue and white phases and perhaps the rigging / repair and this needs to be apparent.

So step one is easy and just round everything to it's whole number (you can fudge it a bit if ya want).  I also just combine the Upper / weather deck into one category as well to make it easier to track and this deck is filled with the lightest guns anyway.  And now have:

People just grasp whole numbers easier, and one can honestly say that while the layout with fractions is more accurate, the one with whole numbers is much easier and faster to understand.
Added bonus! using whole numbers make it easy track when you use Marines to sub for crew.  (2 marines equal 1 crew for manning the guns in PC).

Here's a table for the actual crew numbers rounded to whole numbers for the most common cannons lbs.

But One Change Produces Others...

SO this means we have to change (slightly) the way that we track crew assigned to guns, as the standard rules still require fractions.  This again is easy enough:  the first loss of 1 crew should reduce 1 gun box from being worked (reloaded)  and and then at a ratio going down keeping as close to the original numbers as possible.  sounds more complicated than it is.  let's continue with the Spencer and the lower deck:

--This creates a minimum number of crew factors per number of working gun boxes.  I then figured it out for ALL types of cannons for all decks on ships.  this makes it very easy for the player to know how much crew is needed to fire which guns.  I then put this info into a table for each type and you can see it here....


For the weather deck, which usually has the carronades and the lightest guns which require 1 or .5  crew each, just add it up and round as appropriate.

It's really just the same info as above, but in this way a player can immediately see how many gun boxes can be worked by looking at how many crew factors the player has assigned to the deck.  I'll provide a better example below....


Putting it all Together

The deck log that comes with PC is pretty good as is, but as I'm messing about with the crew numbers and providing additional information / tables regarding how the crew and guns interact; I also made a table laying out all the crew assignments.  This is essentially the same as the deck log:


Now, using power point (power point is your friend, you can do cool wargame stuff with it), I took an image of the ship card, my gun tables, my crew assignment table, and any other info I think is important to be handy (like when to take a command check) and put it all on one sheet.    Here is the Spencer in all her glory:

I also added little numbers next to the gun box rows so players can more easily ID which is which.

Overall what this does is make the math easy, and put all the info in one place.  Now when a crew factor is lost, a player can cross it off the ship card, and remove it from the crew assignments, and easily know just how much man power is remaining to sail and work the ship and when a ship needs a morale test.

You still need the standard deck log to track MFs, reloading, and repairs.  But since a deck log can track two ships, a player only needs to have a deck log and 2 enhanced ship cards to play.  Which is the same sheets of paper one would likely need to play anyway without modifications.

Here are a few other examples: 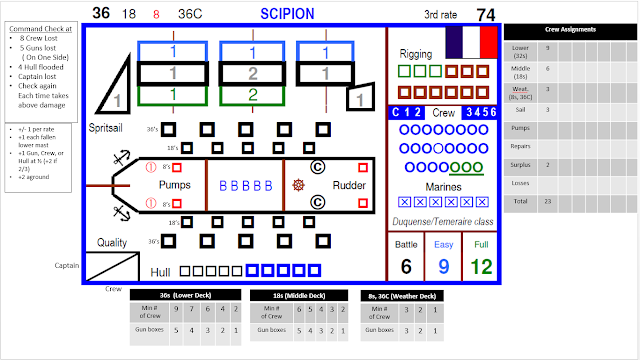 So here is the enhanced Spencer Ship card with some damage marked off...

So over game play Spencer here has taken 2 hull damage, 3 crew losses, 2 rigging, and a marine loss (Just enough damage to be worrisome).  The crew assignments table clearly shows that the Lower deck has 8 crew, the middle 5, the weather 1, sail 2, 2 assigned to repairs (these are in hash marks  and probably assigned to repair the rigging and the hull, that's what I would do), and with the 3 losses.  The idea with the crew table is that as one column gets messy, just move over to the next.

And since Spencer still has 5 gun boxes on the lower and middle deck (good for it!), the player uses 2 marines each to work the gun boxes (as 2 marine factors equate to 1 crew factor).  The player notes this by drawing a line under the marine factors and just writing M or L under it to mark their assignments.  If the Marines move (or die), then these can be erased. 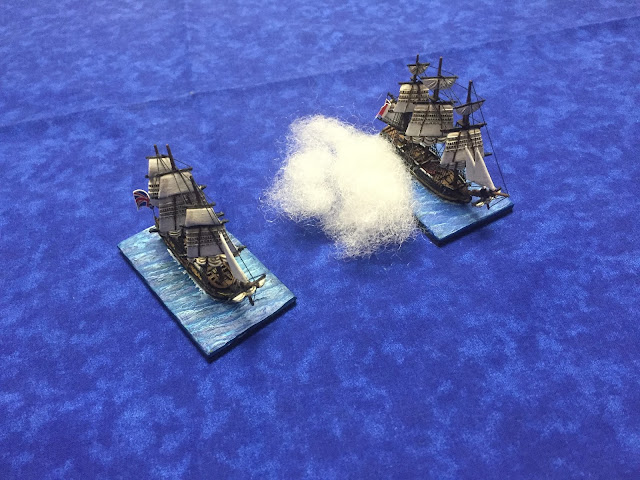 BUT wait!  there's more!  after doing all this work to avoid fractions it make sense to modify the instances in the game when damage is halved, just to continue to have whole numbers.  Fortunately, there's only 2 instances where a ship would receive half damages:  Bow rake and Volley Fire.

Bow rake produces an effect of  EDR (damage rolls)  x 1.5.  so 2 EDRs would produce 3, and 3 would produce 4.5.  Easy, just round  round up or down to the nearest whole number depending if you want more carnage or less.  Rakes are pretty rare anyway...

Volley Fire:  the table has some instances with 1/2crew or 1/2 marine.  just modify these to be misses or 1 damage as you see fit.

The Cannon CRT table has sections of "1/2 PRG"  In a convention setting,  I would have players ignore this option; ie, don't roll, it;s not a shot.  It's kinda long odds anyway that the shot would result in significant damage, and I think taking the shots will ultimately result in players just watching each other miss.

That's it.  I hope that was useful to someone.  PC is a great AoS game for small actions.  These mods are not at all necessary to play, but I think are good tweeks / streamlines for a wargame convention to make the game more accessible.