Just a hodgepodge post of general hobbying goodness.
That last sentence was almost a tongue twister.

A Good Trade on Shipping

I know I missed the bus on starting a wargaming blog when blogging was in it's prime.  I can only imagine the hectic traffic even mediocre blogs like this one would of had.  Yet, one the biggest benefit to Blogging (Blogging with a capital B is a verb, and it includes writing your own and also participating in other's blogs) is creation of an online community.  In many ways, this blog has become my wargaming club; where I come together with like minded wargamers and we talk about how fun miniature wargames are and how other hobbies are dumb wastes of time.  Naturally I'm the power hungry Emperor of the club and ya'll are my corrupt counselors and nobles.  I'm sure you all feel like the emperor on your blog.  It's like we're all the Skekis of wargaming.
That's just a round about way of saying that I like making these online relationships.  Especially in these pandemic times.
My latest online club interaction: Vol of the Sailing ship blog  and I recently did a trade.  He's embarking on some Black Seas Sailing ships and I had one of the Constitution miniatures just laying around that I was going to get around to putting together in the near NEVER.  It was destined for a flea market; so I offered to send it to him for the low low price of emailing me his address.
But in his heart he was too proud to accept freebies so he traded me two Langton kits of 74 gun 3rd rates, which match my current Age of Sail ships.
Thanks Vol!
Everyone else take note!:
I am not too proud to accept freebies.

While I wait for the freebies to come rolling in, I've been doing some shopping.

For 15/18mm I think you can get away with using fabrics and such as I often do, but I like resin ground pieces for 28mm. It's just a personal choice of aesthetics.  I wanted a few more crop looking fields for my future 28mm AWI games and found these from Paul's Models.

I've pledged in my third kickstarter ever: 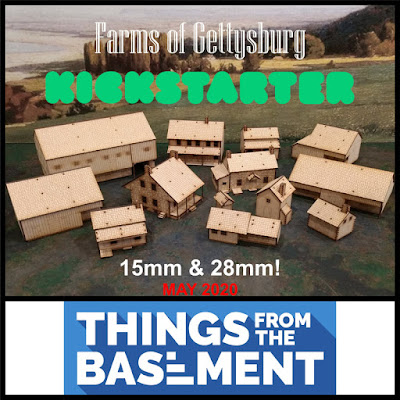 It's still a weird experience to me put down money and wait a year till something arrives.  It's like medieval mail order.  But this looked like a good buy as I could use a bunch of 15mm ACW houses eventually.  I went all in to get everything.  Now it's a waiting game.  I'm sure that during the year it takes to arrive we'll get back to normal wargaming...
Oddly enough, it's my first miniature wargaming kickstarter pledge.  The first two were for board games.  The ACW board game "Antietam" I got from a kickstarter I now feel was kinda a waste; there is sits on the self having never being played.  The second board game I got was the new edition of "Britannia" which is a game I already know and love and own, the KS was just for a shinny new one.  It's on a boat somewhere; understandably delayed due to pandemic.

One of the things I enjoy doing the most in this hobby is making terrain.  Pity I don't do more of it.
Maybe I should give up wargaming for doll houses or model trains?  And while you all think of me as a master terrain builder the real master is Pat over at the  Wargaming with a Silver Whistle.  Because I want to be just like him I picked up his book of terrain tutorials. 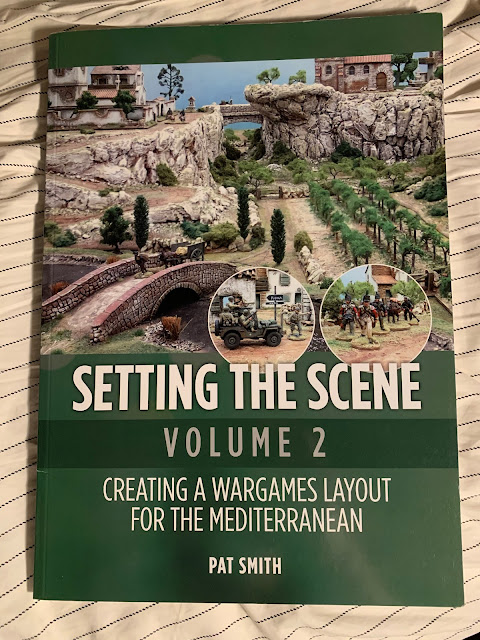 Speaking of freebies, I got some nice hobby loot for Father's Day.  We went down to San Jose to celebrate with my father in law, which marks the first time the kids and wife have left the house for months...
Completing my decent into complete and utter Nerdom, I told my wife I wanted to try out one of the magnifiers that you wear on your head while painting.  She obliged and got me the Opti-Visor.  I already use a magnifier that sits on the desk while painting so I doubt this will improve the painting much, it's more about exploring the ease of use.
And as we all know; one of the rules of marriage is that you try to preserve the attraction as much as possible.  As it gets worn down through constant exposure.  So it's a good thing that I tend to paint alone in the hobby room, because I'm sure the sight of me wearing that thing is super attractive.
Unless maybe she had a secret dentist fetish I didn't know about...

A Small Return to Better Times

I was able to play a game face to face!  My friend Mr CG invited me over to play a board game.  After discussing it with management (the wife) we agreed that face to face gaming could begin again provided it was 1) only one other person  and  2) we wore masks.
We played a game of Conan, some scenario where the players had to rescue Conan and a princess from a dungeon.   It was clear that first you free Conan and then use his swinging axe to get the princess.
I forgot to take a picture, which is no loss, because pics of board games without a lot context are boring.  So here is a pic of a Conan Barbarian Princess
Thanks for reading.  Thanks for comments.
Continue to take care of yourself in these times of unrest.
EDIT:  I put in the links to Vol's and Pat's blogs, because I was a chump and forgot to do it the first time.  I'm sure ya'll were just being polite and not wanting to hurt my feelings by pointing it out.
Posted by Stew at 9:05 PM