A post in which I summarize my recent gaming weekend at the local convention; Friday night through Sunday.  Delayed some, due to stuff discussed in the personal note.


I had signed up to run 3 games, one on each day.  I had meant to run around and take a bunch of pictures but never seemed to get around to it, but I did take some.  We'll do a day to day blow by blow with some general thoughts about the con at the end shall we?  Of course we shall.

I'll be focusing exclusively on miniature wargames because that's what I like and wanted to play.

Starting Off on Friday night

My convention weekend started off nicely on Thursday evening when the wife took the kids to her parent's house in the bay area; with strict instructions that I was supposed to have fun all weekend and not try to do any chores.  Yes Ma'am.  As an extra bonus I managed at the last minute to get Friday off from work versus just leaving a little early.  This left me Thursday night through Sunday with a rare gift of alone time.  Something I usually only get while driving to work, which is why I sometimes take the long way.


Since I had nothing really planned till early Friday evening, I took full advantage and woke up on Friday whenever I darn well pleased, went to the gym (because I'm sure those 40 mins would counter-act all the pizza and soda I was about to consume all weekend), and lazily collected the stuff I would need to run my 3 games over the weekend.

I was actually a little nervous about transporting the Osgiliath terrain.  While not exactly fragile I wouldn't call it robust either, not to mention being big, in odd shapes, and awkward (just like me).


Showing up late Friday afternoon, after I unloaded the car, I spent some hours chit chatting with people and saying hi.

I would of liked to play but there really wasn't time to get involved before I would have to host my own, so I contented myself to making jokes  and adding funny commentary while setting up my LOTR game "Defense of Osgiliath" 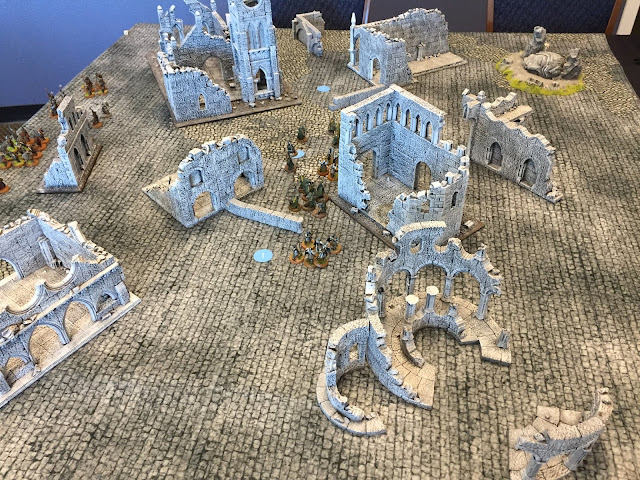 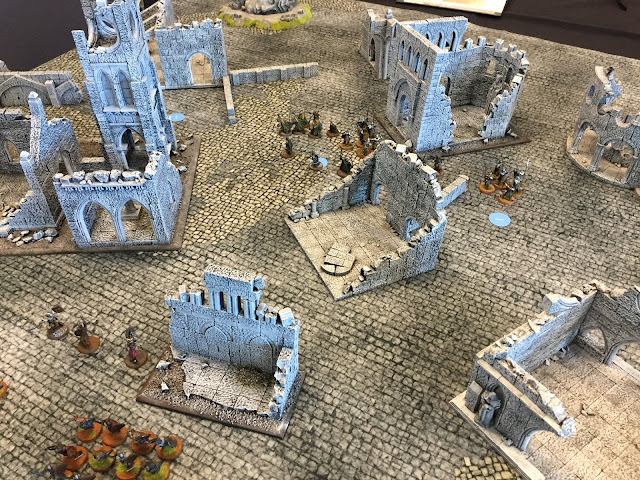 I had 2 players, a Mr. R and Mr. M, both of which I've known for awhile and are Good Guy Gamers.

I had a pretty smart set up for both my LOTR games, if I do say so myself, in that I had prepared ahead of time 2 different OOBs depending on how many players showed up.  2 players was just the scenario straight out of the book. 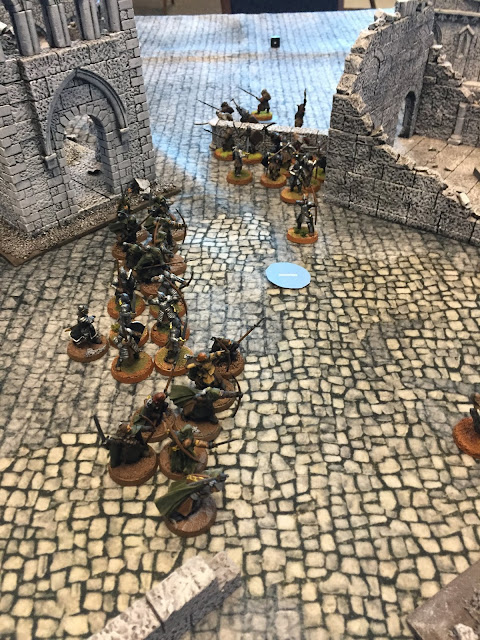 Both players had a good time, though the good player was CRUSHING IT for awhile with outstanding die rolls, so it was a good thing the evil models regenerated.


I could use some more practice in explaining the LOTR rules quickly and efficiently as I'm new to hosting games with these, but overall I think it went smoothly and it was gratifying to see the Osgiliath set up on the table.


Then packed up and went home to watch Frasier on Netflix.  Because I could.  Because no one was home.


Saturday, Day 2 at the Con


Packed the car up with the stuff for the  the ACW game I was hosting later that day, and back off to the con well rested and happy.
There were some options on Saturday morning and I decided to play in a space ship game based on the Babylon 5 series hosted by Mr. C.   Now I've never seen an episode of Babylon 5, but never the less it seemed like a good option...


..mainly because:
1) it fit my schedule perfectly, starting early and ending with enough time for me to grab some lunch and set up the ACW game.
2) I haven't played in a space ship game in forever
3) Most space ship games play just like an Age of Sail game - moving and turning, firing arcs, speed adjustments, etc...  the main difference is that instead of saying "I fire my lower deck of 32 pounder guns, boom boom boom!"  you say "I'll fire my armor piercing twin linked beam lasers, pew pew pew."

I took a few minutes to wander over the the What a Tanker game by Mr. R, which I would of liked to play in but alas again, schedule wouldn't allow it.  BOO 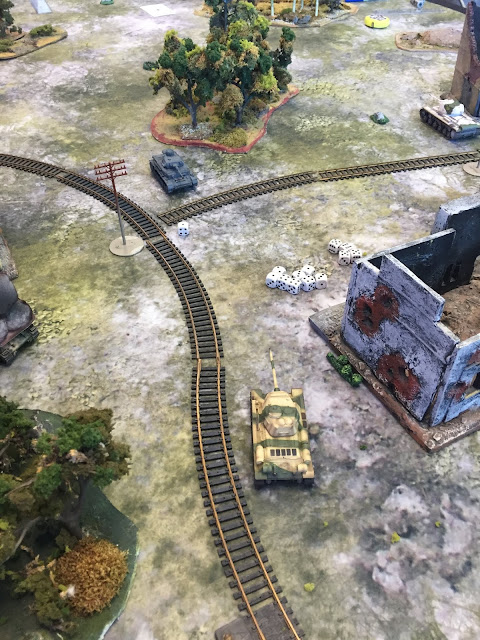 After the fun in space, I set up my ACW game for fighting out Barlow's Knoll.
I had some high hopes for this being my flagship game at the con; a big battle, lots of miniatures, a nice looking table, and room for 5 players.  It was also, I think, the only game on the schedule going from Saturday afternoon through the evening so I had high hopes for a good turnout, and was a little disappointed to get only 2 interested. 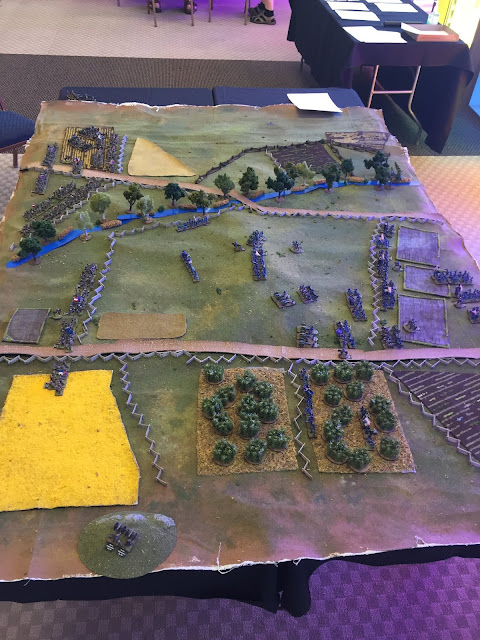 With only 2 players, and knowing that there was no way that the whole battle could be played with all the troops, I did some quick GM thinking and basically just cut the battle field in half.  Giving the CSA 3 brigades and the USA a division.  In hindsight, this was still a little large as RFF really plays best when each individual controls 1 large brigade or 2 small ones. 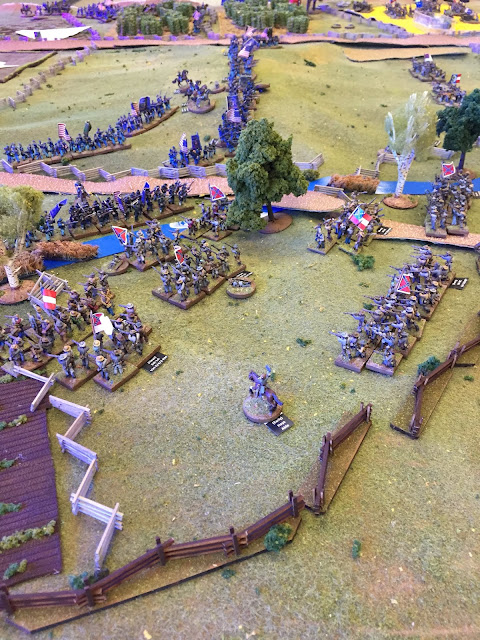 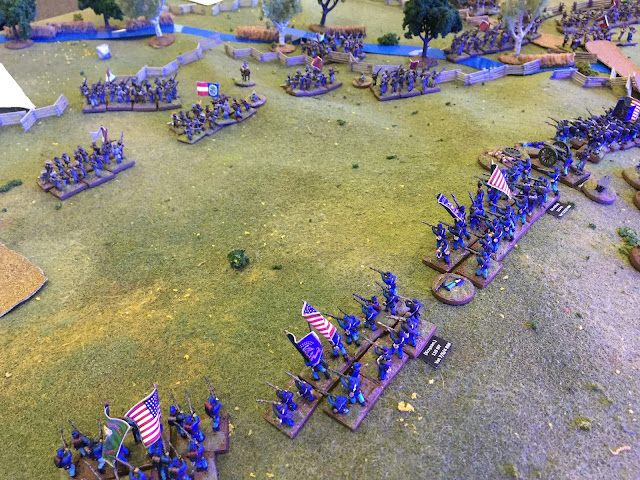 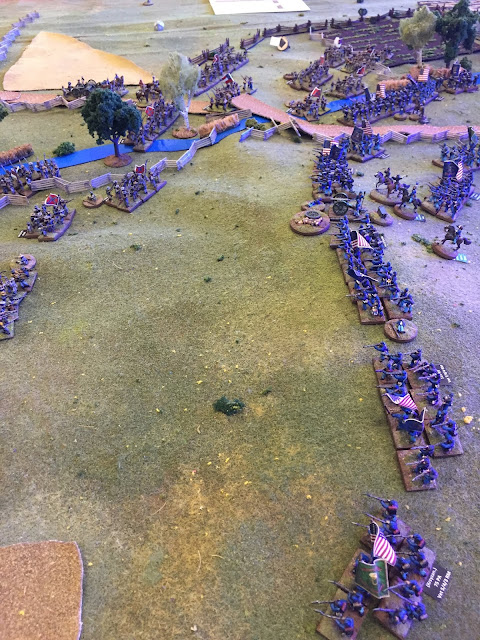 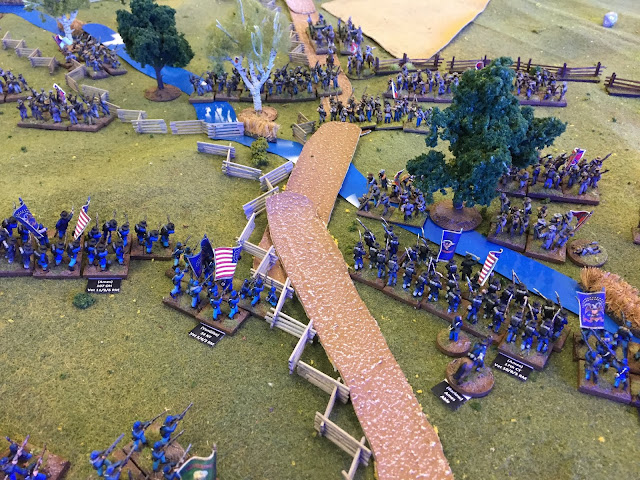 The ACW gaem ended around 9PM, and with nothing going on I packed up and went home.

Sunday morning saw me back at the con for an early morning game of Gaslands.  A system that I've heard lots about so wanted to try it.  Turns out, it's a really fun game.

Gaslands was probably the most attended game of the con, with 7 players at one time.  However, I also learned that since gaslands is a game with single activation (1 car moves at a time), it can play kinda slow with a lot of players.  And other game tables were empty.  So maybe in a bout of selfishness and wanting to try some else new, I crashed my car to take me out the game so I could go do one of the empty game tables.  My car was on it's last legs anyway because I've already had my run ins with the debris strewn all over the table.

I then played in a Napoleonic game hosted by a Mr. L featuring the one and only Sharpe's Rifle company. 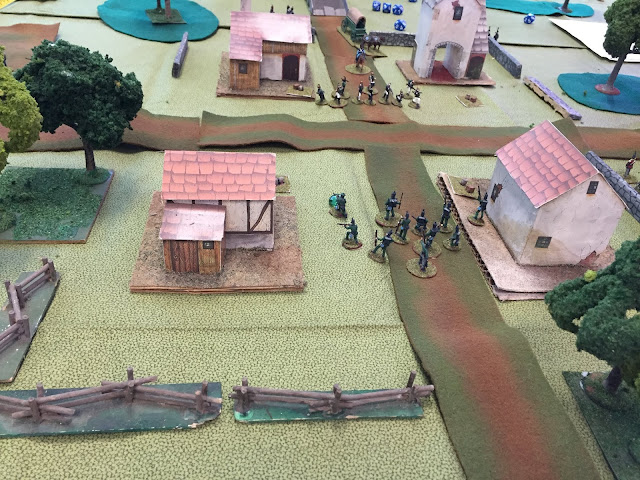 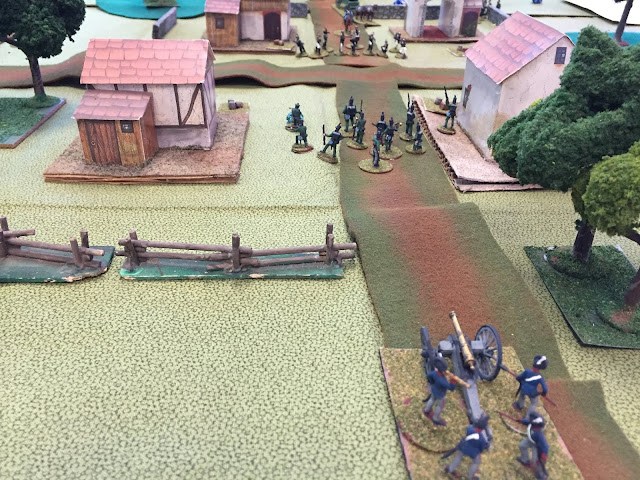 The rules were "chosen men fat" which I had never heard of before.  It's a skirmish game.
The idea was to get some objectives of fine wine out of the town, I playing the British manged to grab two of them for a draw.

After all that it was time to set up for the last game I was hosting, "the Retaking of Osgiliath." 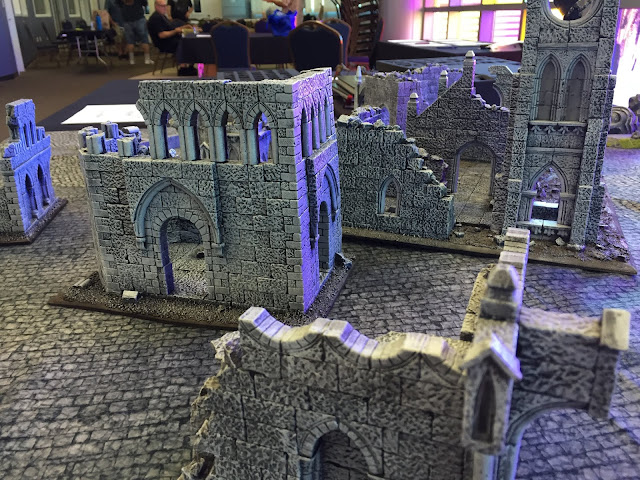 Unfortunately, the game didn't run because no one really wanted to play.  There was some mild interest but most people where gamed out and I already had an attitude of "unless someone says they're dying to play, then never mind and pack it in."  It was the last day of the con and late afternoon, so I don't blame folks.

Instead, I left early and brought some KFC to my aged and ailing father.  Which is his favorite.  We watched some lame TV show about sharks.

General Thoughts of the Convention


I did have a good time at the convention.  The venue is great, the people were fantastic, and the games fun.  GMs can store their stuff at the con (which I had forgotten about) which is very helpful for people putting on multiple games.

I had less luck with scheduling this year than last year.  Last year I seamlessly went from one game to the next and it was spectacular.  This year there were a couple of occasions where I really wanted to play in a game but couldn't because the games I was hosting were scheduled too close or overlapped.  I blame those GMs for scheduling their games at the wrong time, because how dare they schedule their games when it works for them and not when it'd be best for me.  (joking of course).
It's just one of those things that happens.

The only real negative was that the con was poorly attended.  There just weren't that many people there.  One doesn't expect a large turn out at these small local cons, but it was still pretty low even allowing for that.  I never had a full table of players, and I'm going to blame this on the low attendance and state that it's not a reflection of my personality.  I guess it's possible that people aren't really into the ACW and LOTR, no that can't be it.

The event organizer went around and asked everyone what might help raise attendance, and I have no real good feedback because I have no idea how to run a convention and make a profit.

So while I had a fun relaxing weekend, the low attendance does tend to put a damper on it.  Still, I shall return next year.

And I am a BAD BLOGGER because I didn't do the blogger thing where I take pics of all the miniature games.  I just didn't get around to it for no other reason than I was goofing off.

Ending on a Personal Note, not related to gaming.

That Sunday night after the con was the last meal I had with my father, and the last time we would speak.  He died 2 days later.  I was able to get to him before he passed but too late for him to be able to acknowledge me.  I held his hand  and spoke to him while he stopped breathing.  We were alone in the room and it seemed utterly still.

His health has been bad for awhile now, so while not unexpected still more sudden than I would have liked.

Making arrangements to have him buried next to my mother in southern California.  I have now entered that phase of life where one does not have parents.  It is strange.

It will be awhile before my next post obviously.  But thanks in advance for reading and the well wishes from my internet friends.  It occurs to me that I've been corresponding with some of you for close to 2 years now.  I'm always torn about putting personal stuff into the wargaming blog, and usually don't, but major life evens seem to be an exception.
Posted by Stew at 7:55 AM