Earlier in the month I had a fortunate (and rare) occurrence when the moons and stars align and I had what is known as a "free weekend."  I know!  You don't even know what I'm talking about because it's Virtually unheard of among my circles of married men with little kids.  The details of why are unimportant (not bad in anyway, just too boring to explain); but the wife and kids left on a Thursday night, nay to return till Sunday eve.   Unfortunately it was not the same weekend when there was a local Wargame Convention called the Gauntlet that featured only historical games.  but what can you do?


side note: Historical only?
I don't know why a convention has to be historical games only (as in no sci-fy).  That seems like it would just limit the population.  I'm primarily a historical gamer, but it never bothered me that while I'm at one table making machine guns sounds (ratta-tat-tat-tat) the table next to me is making lazer noises (pew-pew).

Anyway.
Of course my first thought was a weekend of loud women and fast music.  (Wait, other way around?...no I think I'm right).

but naturally I settled for my second (and less dangerous) choice; a wargaming weekend to start the new year off right!

I envisioned a weekend where I would play games Friday night after work, all day Saturday with a small group and most of Sunday with a small group.  It's not quite what happened, but to complain would be ungrateful.  The reality is that my wargame buddies have their own lives to live and aren't sitting by the phone/computer just waiting for an email from me.  Also, organizing wargamers is always an exercise in futility, because it's like herding cats!

So Friday night I went and spent time with my father in his new old folks home until he chased me out of there with this surliness, and then began the weekend proper.

Saturday: A day of Post Captain, Life at Sea

On Saturday My friend PC came up from the bay area and after the usual chit chat and catching up, got down to some Age of Sail with the rules Post Captain. I'm an expert on the rules (except for boarding actions) and he's played before, back when his cat chewed on my ships.

The game began with Mr. PC taking 2 British 3rd rate (74 guns) ships closing in on my 2 French ships; a 1st rate (120 guns) and a 3rd rate (80 guns).  We rolled to determine crew and captain quality.  The British got 1 ELITE ship and 1 regular, and the French 1st rate got GREEN (but I gave myself a regular captain just for pities sake) and 3rd rate regular crew.

A French 1st rate with a Green crew is probably very historically accurate, but does take some of the punch away from the big ship with a lot of guns when the crew shoots poorly and takes 4 TURNS TO CUT AWAY A DRAGGING MAST!!  (people familiar with the rules will feel my pain).
But when a Green crew pulls off something unexpected it fills you with pride.  Like when they pull off a tacking maneuver that they never should of tried in the first place but needed to be done to stay in the battle.
Overall I found the rolling for crew quality a fun thing.

I also got to use my new Ocean mat that I got for Christmas / my birthday.  Looks pretty good huh? 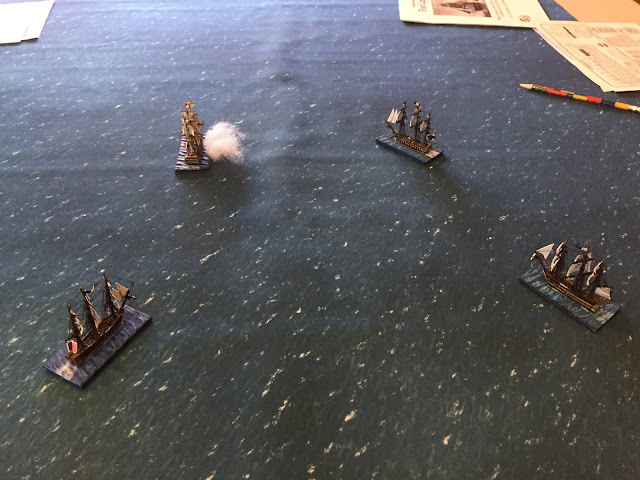 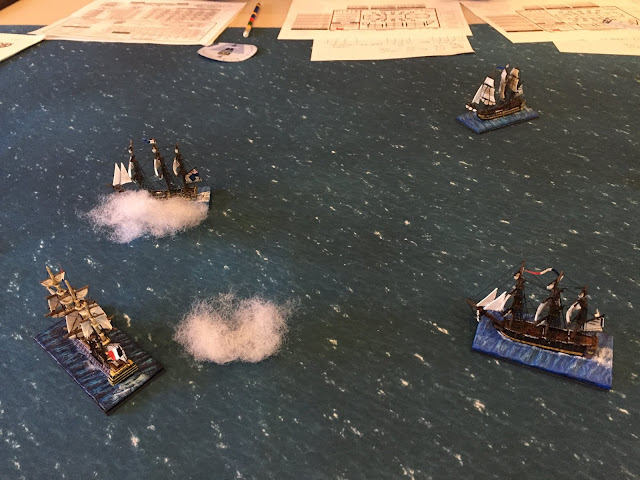 When my third rate struck it's colors it was time for reinforcements to enter the board!
Mr. PC got a British 1st rate (100 guns) and rolled an ELITE crew (making it a monster) and I got 2 French 74s; one with ELITE crew (hurray for the good guys)

Side topic: Boarding Actions with Post Captain
are slow, and bloody.  That's really it.
Actually I still find the boarding rules in Post Captain to be a little convoluted,  but overall seem accurate.  It was good to actually use them 'in anger' and will likely play faster next time.  I didn't get a picture of the deck cards with all the fiddly markers.  It was kinda fun that my Green crew on the 1st rate beat off the ELITE crew of the British 3rd rate mainly because the Green crew has SO many more guys because it's a much bigger boat.  I am very tempted to invest in some 15mm crew figures just so I don't have to use the crew tokens again. 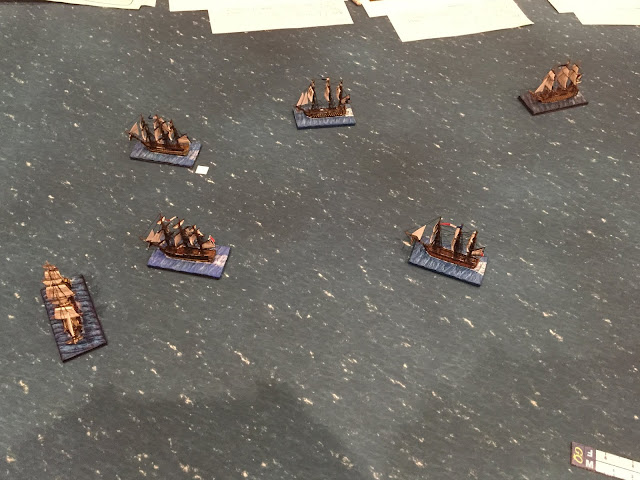 All in all, we probably played Post Captain for about 6 hours, mainly because we had nothing else we wanted to do.  Now I really feel like a rules expert.

Sunday: A day of ACW with Regimental Fire and Fury

The next day I managed to wrangle 5 players for an ACW game.  I got 2 veteran players of RFF with AS and CG, 2 players that have played before with PH and MW, and 1 brand new rookie but seasoned wargamer RB.  There were 6 players before Dai cancelled (because there's always a cancellation, but life happens) but that worked out bc the scenario was for 6 players, which meant I got to play!


I wanted to do something a little different than just a straight up historical scenario.  As fun as they are, sometimes we players want to seal our own fates with our own fateful decisions (nice word play!).


This scenario will be presented in depth when I write a post about it and scenario design (nice foreshadowing!), but in broad strokes;
the table is set up with 3 entry points on each side (basically 3 roads).
Each entry point has secret instructions on which turn the forces arrive.  Players can choose what formation the troops move onto the table.
The players pick their commands from forces available, and the together assign the march orders, but the overall commander has the last say.  The Overall commanders also have some artillery batteries that need to be assigned


Both sides have their orders, but the winner is the side that owns most of the tabletop, as they have secured the flank for the next day of fighting. 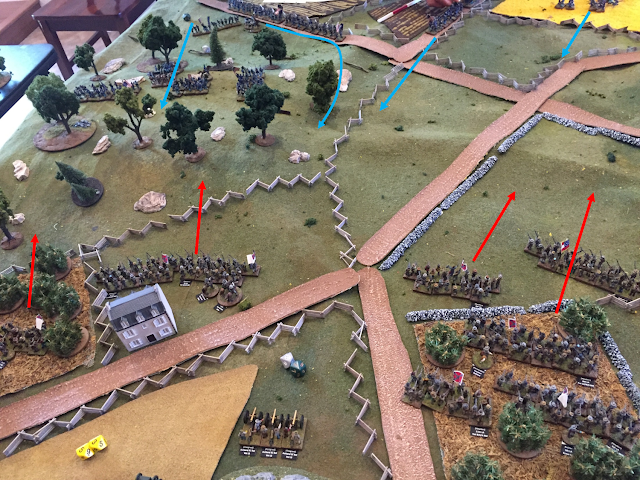 What evolves is a large meeting engagement with some randomness provided by the player decisions. 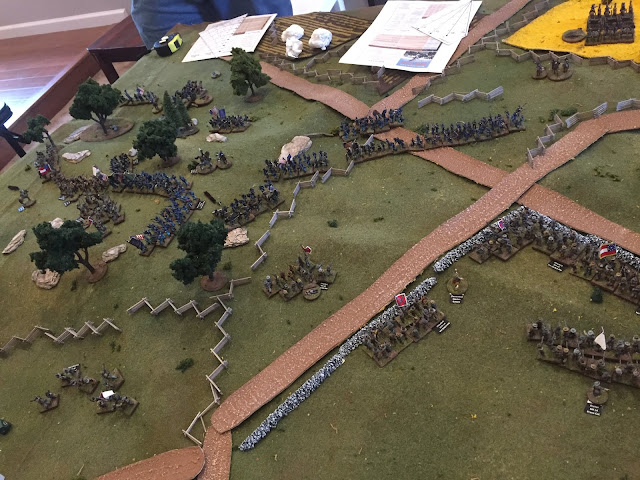 I played a confederate brigade that was ordered to enter on the center of the table.


Not too many pictures or details as I was playing and hosting. 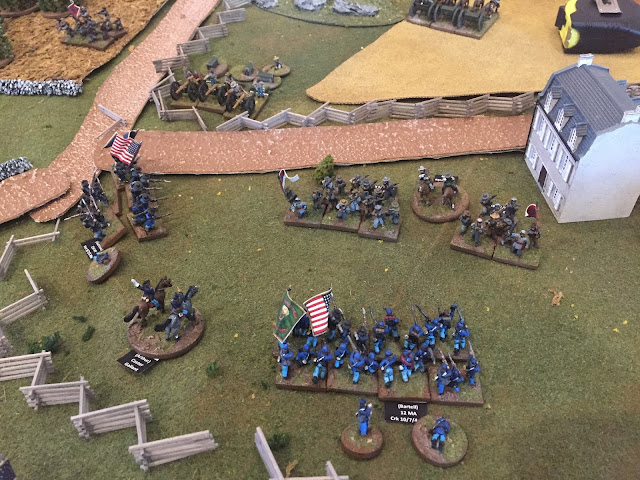 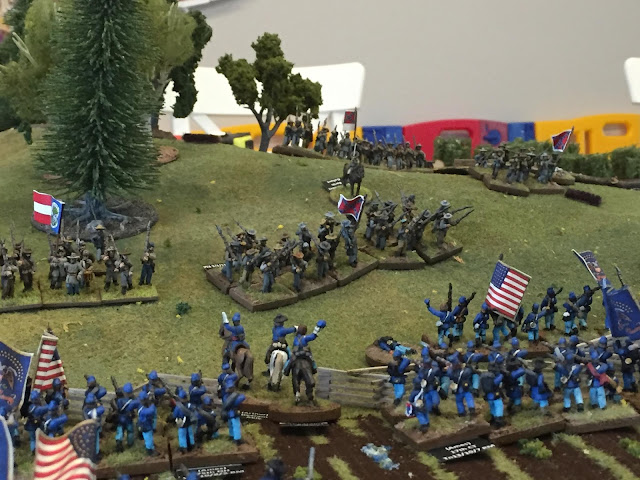 Game lasted around 7 hours.  All the gamers left just before the family walked in.
Everyone said they had fun and enjoyed the game.  Of course how could you not enjoy a game of ACW in stunning 18mm?  And played in such luxurious accommodations as my front room that doubles as the kids play room?   I even picked up all the toys and rattles off the floor first.


In Closing; Get the Gaming in While You Can

So one weekend spent at home and 13 hours of gaming on the books.  2 boxes marked off on the Gaming Matrix.  A good time had by many who enjoy this singular hobby.
Who knows when such a rare opportunity will arise again.  Just to prove what a rare weekend it was, I'll tell you that I was supposed to have another such weekend at the end of January; but that was dashed away due to family events and now I'll have to watch the kiddos all by my lonesome.   I had plans / opportunities to play games at other people's houses that I had to be lame and cancel; because life happens.


Bright side, I had some time to get some painting done after the kids wents to beds.


Thanks for reading, hope you enjoyed.