Lord of the Ka-ching

A little something trivial for the weekend.

GW has a new version of it's Lord of the Rings Strategy Battle game out called the "Middle Earth Strategy Battle game" and I am very tempted to purchase it.  LOTR SBG was about the only GW product that I really enjoyed; I thought the rules were really good and the game fun to play if you limited your army selections* and it was LORD OF THE FREAKIN RINGS.

And I haven't been paying attention to GW much lately, having no interest in WH40k or Warhammer, or Age of Sigmar or whatever.   While I do have a soft spot for GW because it was my first exposure to Miniature Wargaming, overall I have somewhat of a negative view of the ways that they blatantly skew game play this way and that in order to sell this model or that model, and continuous codex creep is lame.  Plus everything they do is super expensive and I don't like paying $20 for 1 figure.
But I've also evolved as a gamer and grown more mature and my play style has moved away from tournaments and such like that anyway, and it could be a good idea to pick up the game now while everything is 're-balanced and streamlined.'  (for now anyway, before they ruin it with new releases)  I already know that I like the rules because I liked them before.   It doesn't help that I keep watching Youtube Videos about it and everyone is just super excited and PUMPED!  It doesn't help that some people are posting cool LOTR stuff on their blogs (YOU KNOW WHO YOU ARE!)  😃


Side discussion: In the Beginning, there was only Warhammer 40k

I got into miniature wargaming in my late 20s when some friends introduced me to WH40k. Probably around the year 2002.  I forget what edition it was.  I played it for about 2-3 years, starting with a Space Marine army because everyone said that was a good beginner army and then moved on to a nice collection of Imperial Guard because that army was more true to my heart.  However every game was starting to be the same; the enemy would have some 'Big Badass thing' (hence forth knows as the BBT) in the form of a demon, a large alien, a super elite killing squad, etc..  I would spend 2 turns shooting at the BBT while it moved across the board till it reached my guardsmen and then it would eat everyone.   Or I would take my own version of the BBT to counter their BBT and the whole game would rest on whose BBT won.  And sometimes I got lucky and wounded their BBT enough with lascannons that it actually died and then my opponent would get sad because their unkillable killing machine was killed by miserable little guardsmen.  I also grew tired of the "Grimdark" setting and just found Nurgle models gross.  One day while playing 40k I thought to myself "I really like this; models on the table, nice terrain, rolling dice.. this is super cool and fun.  I like this concept of 'wargaming' but this game 40k sucks."   Around the same time, on a lark, I went to a game store that wasn't a GW store and saw to my astonishment that there WERE OTHER COMPANIES that did miniature wargaming!  Hard to believe maybe, but for a good long while, I didn't know that GW wasn't the only company that made wargaming rules.  It's not like GW ever admits there are other companies out there and everyone I knew who wargammed played 40k.  I walked into that game store (Endgame in Oakland Ca. if you must know) and saw WWII models and some game called Flames of War (2nd edition) and after I picked my jaw off the floor I threw money at the counter screaming "gimme gimme gimme" and thought "Well, I'm never playing 40k again."

And that was that.  I became a Historical Miniature Wargamer, and I was home.

Except for LOTR (and StarWars and StarTrek).
So if I started it up again it's not like it'd be picking up a new genre, as I've already got a LOTR lead-pile (previously documented HERE ) and existing forces for Mordor and Gondor (when I moved years ago I basically gave away my dwarves and goblins).  Though looking a them now I have an urge to repaint many of them because I could do a better job now.   I painted some of these around 10 years ago by now and these are some of my oldest miniatures.  I think I started LOTR around 2005 or 2006 and before I learned what a wash was or perfected shading.


So in a fit of Nostalgia I broke out all my LOTR figs from the cold storage facility known as the 'back of the garage where all the spider webs are' and had a quick inventory..

The Forces of Gondor! 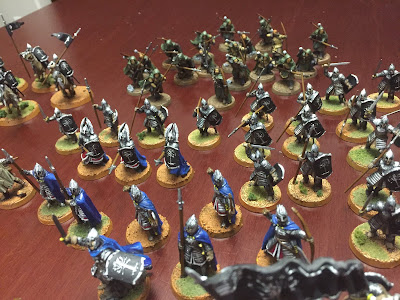 The Forces of Mordor 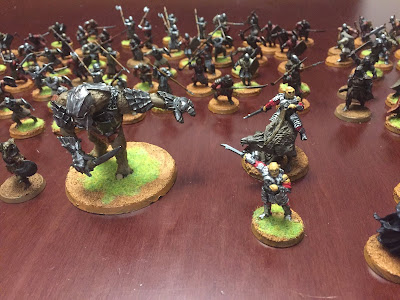 WOW!  more than I remembered that I had.

This Costs How Much?!

alternative title: is it still in fashion to complain about GW pricing?
Doing some research, I learned that to play the game one needs the new rulebook (which has all the rules and scenarios) and the new army list book (which has the stats for all the figures).  One seems pretty useless without the other, and each costs $60.  So that $120 just to get the info to play the game and that seems pretty steep to me.
I've must of been a historical wargamer for too long and have grown unaccustomed to Fantasy wargaming prices, not to mention the normal GW premiums.  For examples;

for $120 I've bought 7 different Age of Sail rule books that need nothing else to play but ships
-on a similar note $120 would be about 6 more ships for the fleet.

For $120 and with my Old Glory Army Discount, I could likely double the amount of ACW infantry
I currently own.

You get the idea.  It just seems like F-ing a lot of money.  I usually don't mind paying around $50 for a rule book, or $20 for an expansion.  I DONT like paying for books full of army lists because invariably that means I'm paying full price for a whole book when really I only want a small section of it.  Half of the army lists in that book I'll have no use for and never look at. I checked and there are 27 army lists in that book and I have models for 5 of them! And it seems like a dirty trick to require both books!  and I feel like I'm getting angrier as I type this paragraph!  And I'm MOSTLY upset with myself because I bought them anywaaaaaaaaays.


Least the shipping was free.

Oh, and I like to use these rules for large skirmish games set in the Dark Ages (Vikings, Saxons, and Normans) which I haven't done in forever.


And in all likelihood I'll read the books, make a few army lists and scenarios, and then put them on the bookshelf maybe never to be played because I'll get distracted by something else...

...like working with BW on making a scenario for Post Captain based on the Battle of Ortegal where 4 British Ships of the Line (and some measly frigates) pounced on 4 French Ships of the Line as they were slinking back home after Trafalgar.  Coming Soon, to a blog near you.  This means I need more ships!....

Or maybe I'll actually start some LOTR stuff.  Who knows.  I can't be predicted.  I'm like my 5 year old daughter with too much candy.

but seriously, I'm an adult and I know what I am doing, I am fiscally responsible, and all the above hopefully comes across as mock anger.

Without a Heading or a Course to Steer

To indulge in some self analysis; I think part of the reason I succumbed to the extremely tempting temptation is that I don't really have a Hobby Direction right now.  I'm usually pretty focused on what I'm trying to do.  As you can see from the labels section in this blog, for the past year I've really just been doing AoS and ACW, almost to the exclusion of everything else.  It's not that I'm now done with those genres, but they have reached a comfortable plateau of "accomplishment."  The ACW battles and the AoS fleets aren't going to get much bigger (most likely not much bigger) Especially for the AoS, as the ships KEEP BREAKING.

I also don't need to purchase anything for one of my on going projects, so that means that the limited hobby money gets spread around as I drift through all my hobby interests.  This is not really a bad thing but something to be monitored; I imagine I'm like most almost middle-aged gamers; I can buy anything I want but I can't buy everything either.  So every purchase comes with an opportunity cost of buying something else.   Which only means that if I spend money on one project and then suddenly change directions, I should not spend more money again.  First world problems.  Who knew having a budget would be so limiting??!

But one is more susceptible the "Wargamer New Shiny Syndrome" when one doesn't have a direction / current project.

So right now I have wandering mind until I settle down on something.  I will still employ the 'Rule of Two'** to the paint desk in order not to get too scattered.


Thanks for reading.  You are the best.

*what limitations?  I thought the rules fell apart some if you took the battlefield mega-heros or really heavy magic users.  Actually now that I think about what I remember, the magic powers overall were pretty dumb.  The rules for magic were alright, but the affects of some spells were way overpowered.  One of the main reasons that I really like LoTR is that the magic in those stories is rather understated.  Gandalf does NOT go around throwing fireballs during the Siege of Minas Tirith.  Yet in the game that is exactly what he does.  And it's kinda the BBT thing all over again but overall the rule mechanics had better ways to deal with it.  It was not the only one who felt this way but It was a general consensus.  The game just played more thematic if you stayed in the mid-power level.

** what rule of two?  A simple rule that I use: There can only be two hobby projects going on at once.  Anything constitutes 'a project;"  whether it be something small or something big.  However 1 of the two projects must be completed before anything else can be started.  In this way. instead of having small amounts of progress on multiple projects and my hobby area being cluttered by many half done projects, what I get is definite progress over a few projects 2 at a time.  because I like being productive.  So for example: right now on my desk I have the AoS fleet being repaired / re-rigged, and about 15 ACW CSA infantry stands primed waiting for painting.  One of these has to be done before moving onto something else.