I blame CS Forester and Lavery

I've been reading a lot of Hornblower lately as well as "Nelson and the Nile" by Brian Lavery, so I was really motivated to play an AoS (that's Age of Sail) game, and managed to squeeze in a game with Dai (HERE).  The rules were Post Captain.  I had just made some minor modifications / house rules (see my previous post) and thought this would be a great opportunity to try them out because surely Dai's ships would end up riddled with cannon ball holes as I sailed circles around him...


Action in the Ocean

Just the highlights of the game, because honestly blow by blow accounts can get long winded and AoS games have enough wind already (Oh my, that was a stretch). 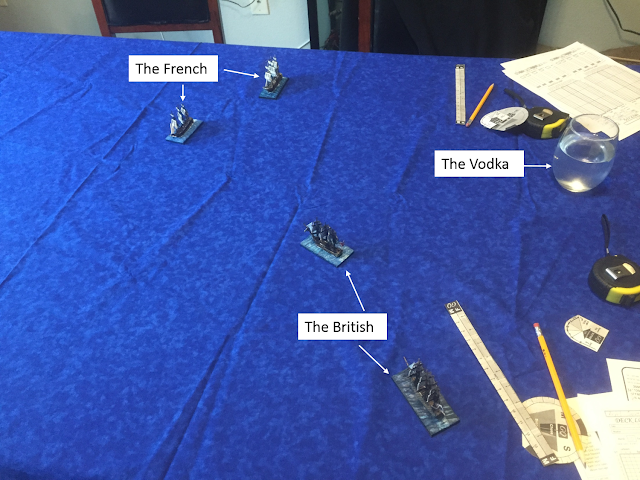 Here we have the important key elements: the ships, the gauges, and the alcohol.
Dai opted for the British so I took the French.
We rolled for Captain and Crew skill which favored the British.  Here is the small OOB:

French Fleet: The 74 gun Scipion and the 110 gun Republican.  Both with Regular Captains and Crew.

British Fleet: the 74 gun Spencer with Elite Captain and Crew (this would prove to be a big advantage, as elite crews just shoot so much better) and the 100 gun Royal Sovereign, with Crack Captain and Crew.

and this is where I teach Dai a valuable lesson about having the proper spacing between your ships..

Somehow I managed to sail my first rate so close behind my 3rd rate that it was forced to crash into it, there not being enough room to maneuver out of the way.  Terrible!

The Ulm, after being hit by the larger ship Republican, has taken enough damage for a command check.  On a d12, an 8 or less will see her continue the fight, a 9 would see her open the range to 500 yds but stay in the fight.  a 10 will signify a withdraw.  She rolled an 11, which causes her to strike her colors on the spot.  : (    Obviously a sick hearted and weak willed captain... 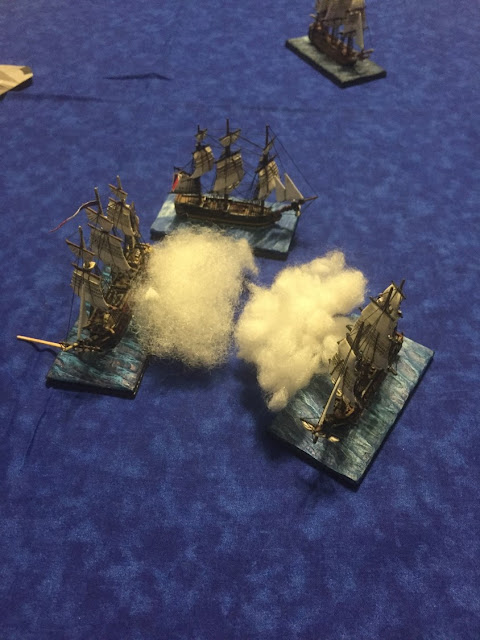 The Republican, with the admiral on board realizing that it was complete victory or disgrace, continues to fight on after cutting free of the entangled rigging. However has no luck as her broadside causes little damage and in the returning fire from the Spencer, she lost her Fore T'gallant mast.  (the toothpick sticking out the side, I'll have to make markers...) 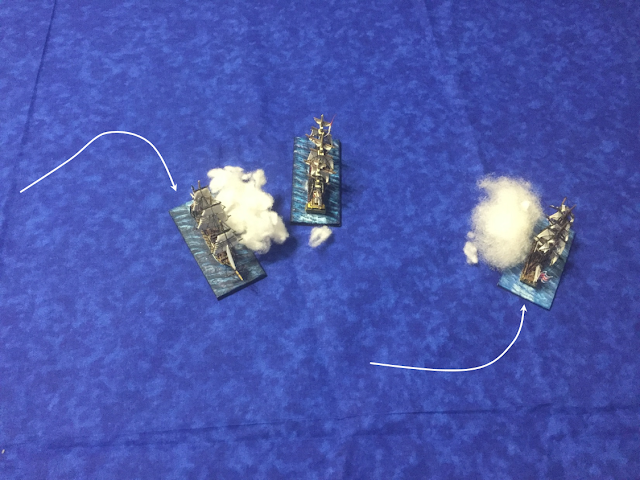 Turn about is fair play, so they say.  Dai moves his ships to gang up the lone French 1st rate.


What a fun game!  but ultimately a disaster for the French, but that will teach me about sailing too close together.

I continue to like these rules.  The gusts and eddies aspect is a nice touch to make the speeds of the ships less uniform.  I now have the firm opinion that 2 ships per player is the sweet spot, enough going on to be constantly busy but not so much that one is overwhelmed in the details.  I can't wait to play this again! I'm really glad I got into this period.   My house rules about crew management worked well I thought, but since I was the only one whose ships took any real casualties, more experience is necessary. 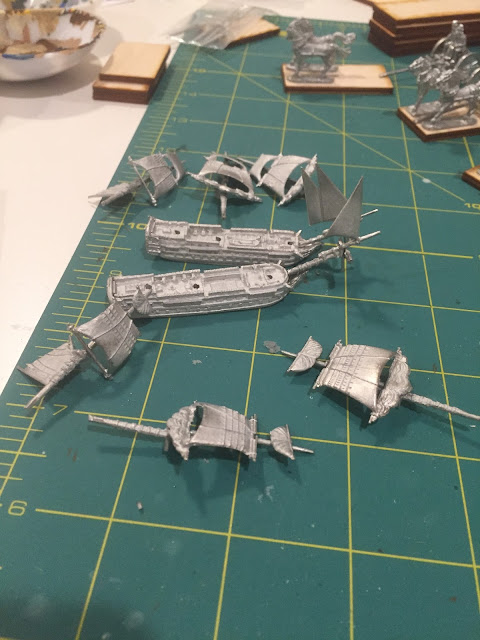 I got so jazzed about AoS again that I paused my ACW work and assembled my next too ships.  As soon as the-never-ceasing-rain stops I'l get to priming and painting.

And because of my "rule of two" (where I only have two prjects going at once) this means I'll have to finish the ships or the ACW project before starting another one.

Thanks for reading!  Comments appreciated.  : )