Finished my second ship and the first in the French fleet.  As the British have a 100 gun ship it seemed right to give the French a corresponding behemoth, so this is a French 120 gun ship of the line.  Once again, this is a Langton 1/1200 miniature.

I had to do some research (research means look around online and ask on TMP) on what colors French ships used on their hulls as I didn't know.  I'm still pretty ignorant of the actual history of this period.  BrainW (whose blog is in the blog roll over there ---->) recommends that French ships were either red or yellow, but I also found that they could have blue or white stripes / patterns.

As you can see, I went with red (because I think it looks awesome!). 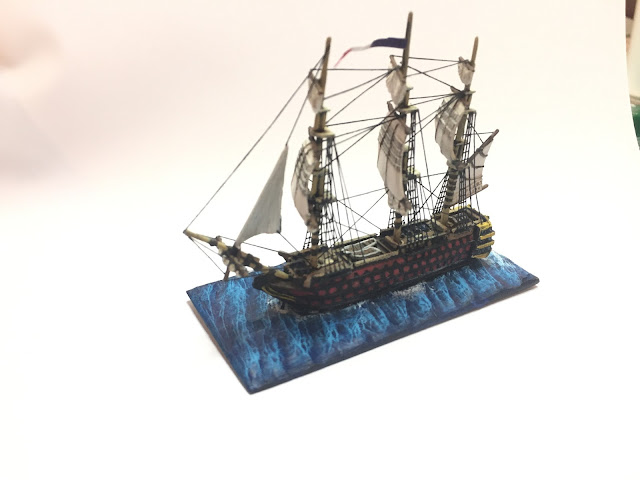 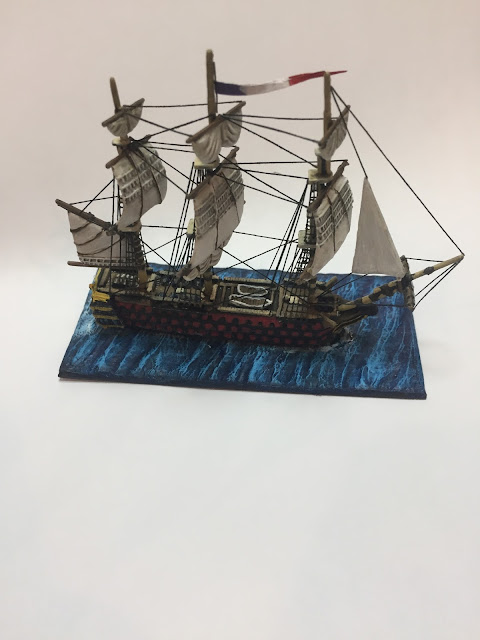 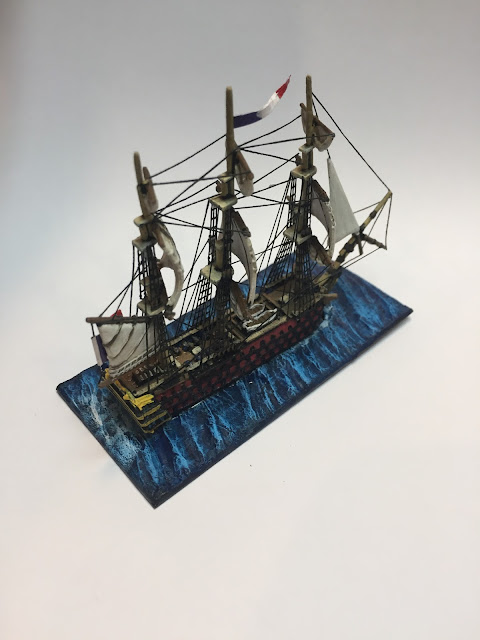 As it's the second ship some practice effects are apparent.  The rigging on this ship is more involved than the first and I think it came out looking pretty good!  I can tell that each ship is going to be an individual as the places where each sail is attached to the masts is going to be slightly different each time.  Also as I look at more and more at examples of rigging from the internet and books I get a better idea where everything goes. 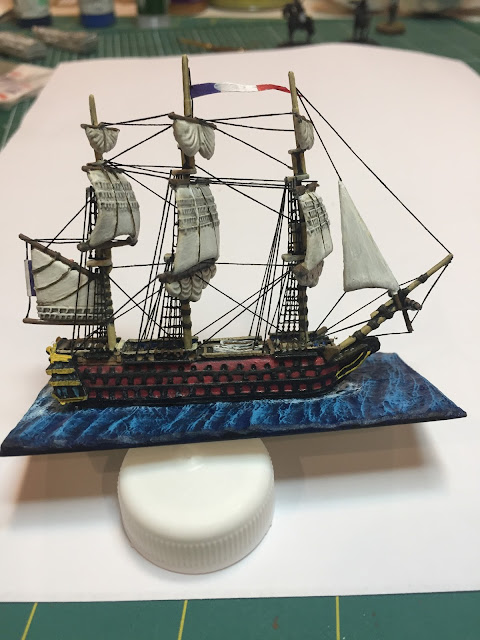 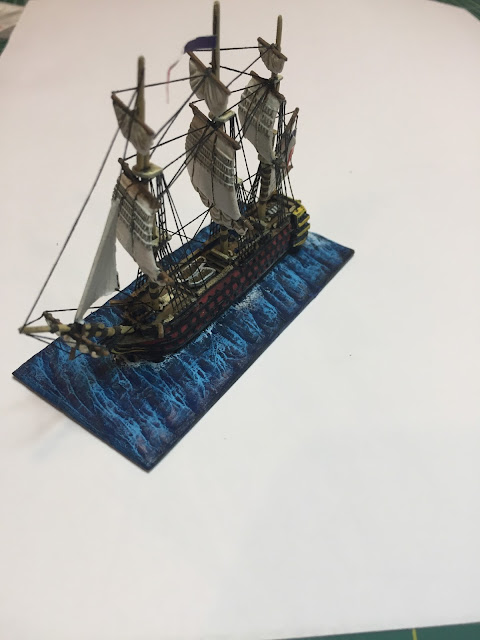 On this model I did more 'backstays' than the previous.  I also angled the sails to the masts instead of making them straight.  As in 'wind a-quarter' versus 'wind astern.'  (Hooray for nautical jargon!)   While gluing them on I thought the angle was quite rakish but it turns out to be subtle on the model.


The next run of pictures will have large amounts of ship booty.

With one French and one British ship done, it's time to schedule a single ship duel and try out another set of AoS rules.  Out of the ones I have, Post Captain by ODGW is my current favorite of 'AoS rules I've read but haven't played.'    I was going to try and get in a game soon, but I discovered to my shock that I don't have any D12s..  has it really been that long since I played a RPG?

As I've stated, I don't know a lot of the history of the Age of Sail and this is a recent endeavor.  SOOO I've done what all good historical gamers do and started some research to learn of the time, which is what always makes us better people than fantasy and scifi gamers.  (that's obviously an outlandish statement meant to amuse).  So I got the book; Fighting at Sea in the Eighteenth Century; The Art of Sailing Warfare by Sam Willis.  I  ordered it online from Barnes and Noble because I couldn't find it anywhere I went and I had B&N giftcards.  It was kinda pricey though at $40 for not a large book.


However, it's already paid off.  let me illustrate:

At the same time, my latest order from Waterloo Minis arrived; 2 74 guns ships, 1 French and 1 British.  I of course opened them right away because I'm like that.  But the ships aren't labeled British and French, just by the hull model, so I couldn't tell which is which.  Oh no!

BUT! About 10 pages into the book, on the chapter of telling friend from foe, There is a diagram of a French stern and British stern; the French being more of a "horseshoe shape" and the British more "conical."    There diagrams matched the sterns of the model ships providing identification.


Probably and argument about how well sculpted the Langton miniatures are.

Coming up for AoS; those two 74s  AND I squeezed in a game of Post Captain and will be writing a blurb about the rules....

Thanks for reading and comments welcome!
Posted by Stew at 8:47 PM