But first; a one act play:

Begin Scene:
Kids are asleep, wife is in bed playing on her phone, probably looking at Etsy.
Enter Stewart (me), the hero of the story.
Me: "guess what I just finished doing?"
Wife: "You filled out those forms so our daughter can go to school next week?"
Me. "nope"
Wife: "you fixed the broken toilet in the downstairs bathroom?"
Me: "nut-uh."
Wife: "You fixed the lock on the garage side door so someone can't sneak in and murder us in our sleep?"
Me: "You watch too many murder shows.  No! WAY more important than any of that.. I just finished 100.
Dark ages.
Miniatures."
(brief pause)
Wife: "Get in this bed RIGHT NOW."
Me: "Oh yeah! Whose your big daddy miniature wargaming painter.."
Wife: "Whoa,- that was weird.  Never mind, you can get out now and go fill out those forms like I asked you to."
End Scene

To recap: back in January I set a goal for myself to paint 100 dark ages miniatures (Vikings and Saxons) and to paint only dark ages miniatures until 100 were done.  Mainly to get out of a hobby funk and to make my dark ages mass battle games juuussstt a little more mass.  I thought it'd be a fun experiment to see how long it would take.
8 months is the answer; because today is the day.  There was no real deadline for the project other than I didn't want it to take all year because for me, that would of been depressing.  I was shooting for late September / early Oct at the latest.  So I'm ahead of schedule.  I am a rock star.  But a the kind of rock star that comes out early and not the kind that is over an hour late to the stage in order to make an entrance.  Don't they know that people had to hire babysitters???!!
It's feels nice to complete a goal you set for yourself.  I feel that after 40 there are so few life goals left to accomplish because everything has been done...
Get married? Check
Know the joy of having children: Check, check, check, check
Know the heartache of having children: check
Start a career: check
Get really good at said career: check
Plateau in said career and get really bored and now just do it for the money: check.
Buy a house: check.
Engage in a never ending battle of breaking and fixing the house: Check
And so on.  Basically my life goals these days are 'don't die' and 'don't go broke' and 'try to have some fun before you die and go broke.'
Where was I?.....Oh yeah miniatures.  100 of them.  Now I know that 100 is a pretty amazing number to have done... whaddya mean other people do it all the time?
Actually I am well aware that for some folks 100 is not a big deal and they paint that many miniatures or more a month easy-peasy.  And I know that others would be hard pressed to paint 100 miniatures a year.   And I know others that have foolishly painted 6mm troops or smaller and I don't even know how many of those would even count as 1 miniature or how one sees them in the first place....
The one thing that they all have in common is that they all paint better than I do.
Whether 100 is a lot or a little doesn't matter.  It was a goal and I did it and it feels good to achieve something.

Now for The traditional closer ups to see the amazingly average painting... 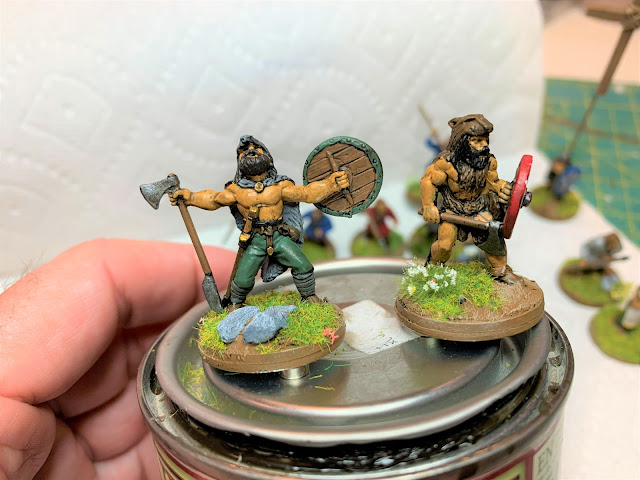 The miniatures of the '100 effort' (as I'm going to call it from now on) consisted of:
20 Saxon Ceorls (on two big battle bases / movement trays)
20 Saxon Thegns (on two big battle bases / movement trays)
Saxon Leader base (w/ 3 miniatures)
20 Viking Bondi (on two big battle bases / movement trays)
20 Viking Hird (on two big battle bases / movement trays)
Viking leader base (w/ 3 miniatures) (see the pattern there)
4 Viking Berserkers
8 Generic skirmishers (they have no loyalty)
1 Saxon Super Duper Christ Cross bearer
1 generic peasant.
Now the naturally epic thing to do would be to show some pic of all 100, and this where I do the epic fail.  I didn't really keep track of where I put the newly painted miniatures inside the storage tubs; just kinda placed them in there higgledy piggledy.    And since they all look basically the same and I can't remember which is which; 'that skunk has sprayed the stink' as they say.
Lots of people say that; it's another way of saying that ship has sailed or the opportunity has passed.  Well people say that over where I live.  Ok, it's only me that says that.  But it will catch on.
And I figure if a a pic of  100 miniatures was gonna be fun, then showing off the WHOLE collection of Saxons and Vikings would be WAY more exciting.  Maybe even 5 times more exciting.
Plus now would be a good time to take an inventory of what I have; Being a visual person it helps to see it all laid out. I set up a table in the living room while the wife watched TV.  It was a show about murder. 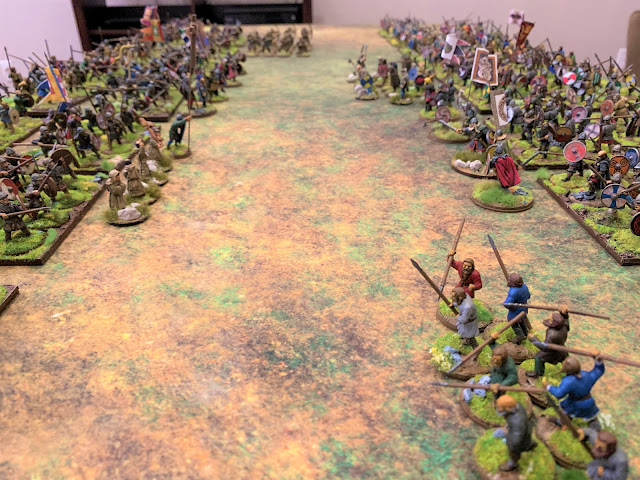 The 100 effort basically added 8 trays (4 Viking and 4 Saxon), 2 leaders, and some various bits to the collection; moving it from 'small mass battle' to 'medium sized mass battle.'  Could probably keep 4 players interested.

A Date to the Dance

These miniatures will have their official debut on  Veteran's Day Weekend here in the United States which is November 11th.  When there will be not one, not three, but two local conventions.  These being Vet Con and Conquest Sac. 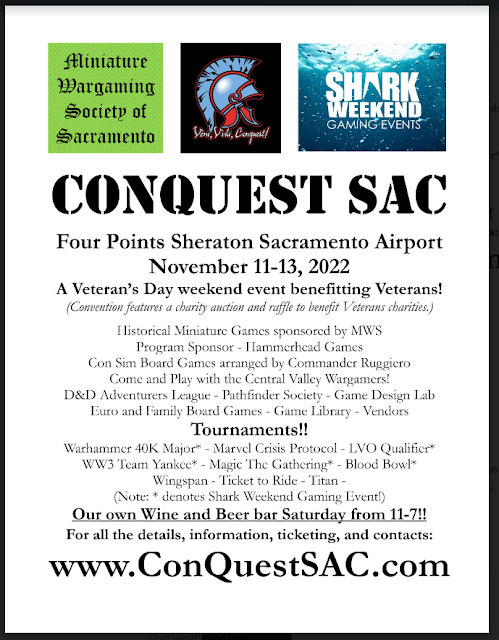 (couldn't find a banner for Vet con, but here is a Linkidy-link)
Feel free to hop on an airplane and come down here just for the privilege of gaming with me.
Actually these local conventions tend to be small to medium sized affairs, and these will be the FIRST I attend post COVID.  I want to see local conventions succeed so that they stick around so I'm volunteering to host several games.  Usually at conventions I am known as the ACW guy due to my long standing love affair with the ACW (I love you ACW, yes I do, whose the prettiest war?  you are!) and putting on games of Regimental Fire and Fury; which everyone loves and I am greatly respected for (if I do say so myself).  BUT I didn't spend 8 months painting dark ages miniatures for nothing!  So Mass battle Dark Ages games it will be.
The plan is to attend one convention Thursday and Friday and the other Saturday and Sunday netting me a 4 day weekend of gaming and no children.  The no children part is key.

Of new endings.  Now that 100 effort has ended and I am allowed to paint other stuff.. I'll have a look see at what is lying around here.  But first I gotta clean up my hobby desk...
and second I'll end this post.
Thanks for Reading.
Double Thanks for writing a comment.
Till next time.
Posted by Stew at 8:34 AM