I have begun my Rebellion (AWI)


"A Rebellion is always legal in the first person, such as 'Our Rebellion.'  It is only in the third person - 'Their Rebellion'- that it becomes illegal." 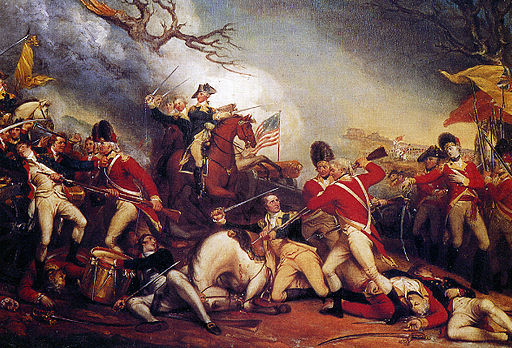 Regular blog followers know that for awhile now, I've been talking a big game about starting the AWI someday.  Probably for so long now that people are thinking I'm all hat and no cattle.  Well, today is the day where I put my money where my mouth is.

There's something exciting about starting a new project as one anticipates future games with pretty soldiers and terrain that are MINE MINE ALL MINE!!!  And there's something terrifying as well because you know it's going to be a LOT of work before you get there.

Blogs are Awesome for this Sort of Thing

One of the things that I've always enjoyed on blogs; is going through posts and seeing a project start and continue on (and on and on) until it reaches the point of being a glorious collection.  This sort of linear documentation is something that blogs excel at; especially if the project starts from scratch like this one is.  One can learn a lot by following someone else's journey.  So I hope that someday, someone, will have an enjoyable reading experience by clicking on the AWI label and having it all displayed before them.  That is, if they stomach all the lame jokes.  Like did you hear that joke about the Liberty Bell?... It really cracked me up.

How To Begin the AWI: Start with Rules

Some people start a genre by wanting to paint the figures, foolish people that they are.  I like to start with rules that will provide a game that I want to play.  This is because I am a gamer over a painter. I also think it's better to start with a skirmish game where the demands for the number of figures is probably lower.
It's all well and good to think "I want to play AWI with Black Powder, so let me see now, I'll just need to paint 200 figures per side in order to get a decent game going...."
I don't have that kind of determination.

On the other hand, the demand for terrain might be higher, as most skirmish games are more fun when there is more terrain on the table.  This will also be a bonus; as terrain all squished together on a 4x4 table for a skirmish will look juuust out right when all spread out on a larger table for a mass battle.

The imputes for starting the AWI came when my package containing my bundle of goodies for Muskets and Tomahawks 2nd edition arrived on my doorstep..


I am somewhat familiar with M&T since I have version one just lying around on my bookshelf...for years.  I had played it a few times and had started a British force for the FIW, but it was one of those barely started genres that didn't survive the PURGE.


SIDE DISCUSSION: What was the Purge?

The Purge was when I was moving from the Bay Area to the Sacramento Area 5 years ago and realized that I had WAY to many miniature wargames projects that had a bad stutter start (that's a racing term).  These kinda started but ultimately stalled projects were all way too much to pack and transport, so they were all sold away for dirt cheap, given away to deserving friends and undeserving rascals, and some were simply trashed. The PURGE was mostly miniatures, as rulebooks don't take up that much space.  It was a liberating experience all in all.

﻿M&T II is a skirmish game that plays on a 4x4 table and usually has around 50 figures per side.  The idea is to get enough figures and terrain all painted up and lookin nice to make for a good game; and as the collection grows I'll be able to move up to larger games like Sharpe Practice 2.  Eventually some sort of mass battle game may be in the far off future as well. My megalomania for large AWI battles will only be checked by cost and time.

After I read the M&T II to make sure that I still liked the rules (pretty sure I do) and watched some YouTube vids, I created some army lists to know what I wanted to buy for the miniatures.  I didn't have any AWI miniatures so this is a blank slate.

So few things in life are blank slates.  It's kinda nice.

*YouTube AARs are always a mixed bag for me.  There's an art to make it interesting.  I like it more when they showcase the rules mechanics and like it less when it's a pure AAR.  Also I get super annoyed when they get rules wrong.  We're all human and make mistakes of course.  Actually I only get annoyed when watching Too Fat Lardy videos that feature the rule writer himself and STILL gets the rules wrong.

Then Get Some Figures; And Being Sensible About It

For me, buying figures is the 'getting serious' step for starting a genre.  I'm one of those guys whose gonna get both sides and all the terrain so I can host the whole sha-bang and win over friends and followers, and gain wargaming super stardom.
And while I know we all do it from time to time, I actually don't like it when I buy miniatures and never get around to painting them.  And they just sit there in the lead pile staring at me chanting 'waste of money, waste of money.'  I got a whole lot of dark ages Norman infantry and cavalry that do that all time, more annoying because it's in French.  Everything sounds more insulting in French.  Just like everything sounds angry in Japanese.
The obviously wise way to go about starting this genre is the 15/18mm scale.  It's much cheaper and easier on the storage.  Plus, a big bonus would be that a lot of my ACW terrain (like the ubiquitous snake rail fence) would be able to pull double duty in both theaters.  Therefore getting the whole AWI genre to the game table faster and providing miniature wargaming economy.
Also, it's a smart idea to start small with a modest order of miniatures and FOCUS.  Don't order more miniatures until the current ones are painted (or near enough).  This way the lead pile will not grow unnecessarily and motivation to keep painting won't be crushed under the weight of all that lead.  And I won't feel guilty when I abandon it for awhile when distracted by some other sexy younger project.
It's an entirely sensible plan;
So naturally I ordered a mountain of 28mm miniatures from Brigade Games.
Along with some 28mm fence kits from Battlefield Terrain Concepts.

Because in my heart, I knew I wanted the 28mm spectacle.
I have some small consolation that my 28mm Dark Ages collection has a limited amount of terrain that can pull the double duty.  A plowed field is a plowed field in either the year of 898 or 1778.  A patch of woods is a patch of woods.  Or so I'll tell myself.  Don't burst my bubble.
SO.
It has begun.  Hooray for new projects!
In my enthusiasm and just to get the hang of it all again, I painted up one British Regular as a test figure. 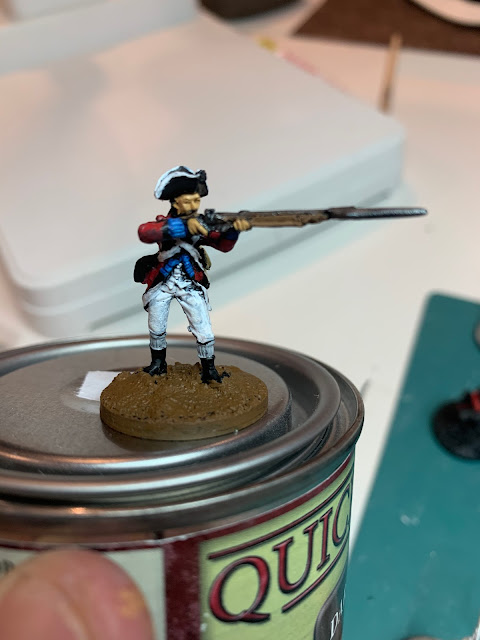 Life has been busy.  All work and no play.  Basically I've been like a single parent lately.  The wife has some sort of mysterious aliment (was tested for COVID and is negative, so that's not it) that has put her down for the count most of the time.  So I have All the kids, all the home school, all the chores, and still working (half from home, and half at the office).  5 days a week I am dad and Mr. Mom.  It'd be a bummer except we're still in a state of shelter in place and it's not like I'm missing any gaming  or any other fun opportunities.   Still, as a result there have been drastic cuts to the 'Department of Free Time."  Hopefully the budget will increase soon.
They say that husbands/fathers tend to over estimate the amount of work they put in toward household chores and child rearing.  Well, not THIS GUY.
The bright side; mass accumulation of hubby points.  We've already discussed how these can be spent.
Till next time then.  Keep yourself and loved ones safe.  Thanks for reading.
Posted by Stew at 11:53 PM