But first a little message from our sponsor:


I reported in my last post that I was taking some time off due to all the COVID 19 stuff.  Well, that lasted about 2 and half weeks.  I had wanted more time away., but after increasingly shrill and threatening phone calls from the boss; I was basically ordered back to work or risked termination.  Which kinda forced the issue.  All my requests for time off were basically denied, because no one in my family had been infected.  Of course, the whole point of taking time off was to prevent infection.

Overall, I have mixed emotions about it.   While I wasn't particularly excited about losing some paychecks and prestige for "working through the hard times,"  I did feel good about putting family first and it was nice to just kinda be home.  Now being back to work it's nice having the income again and a reason to know what day it is and to take a shower, but I'm a little resentful about being forced to go back to work before I decided it was a good time.

OH WELL.  Be a man and suck it up buttercup.

After all, with the unemployment situation that many people are facing I'm grateful to be in a good position, even if it forced upon me...
I could go into more details but it'd be too boring to explain, and I'm sure you get the gist.

I did take advantage of the telework option. so I'm going in half time and working from home the other half, which is actually a pretty nice set up so far.  Basically I am at home for 5 days and work at my institution for 2 days a week.   YAY!  Plenty of time for house projects and using manly tools like screw drivers and wire strippers.  I've been doing so many manly stuff that I'm almost tempted to drink black coffee.  (no one in their right mind should drink black coffee, I needs me my delightful French Vanilla creamer)


On to the real stuff, the stuff that really matters! The stuff of 1/1200 model ships.  When I die, bury me with my ships.

Here we go with 2 more glorious miniature ships to join their fleets.  Both of these are generic 3rd rate 74 gun Ships of the Line.  It’s too bad that Kublacon is cancelled because I’d be in a very good position to finish up the rest of the ships I had planned, and maybe even make a few game enhancing extras like cool markers for broadsides firing besides me making BOOM! KA-BOOM! Sounds loudly at the targeted player.

Here is the French-y.

Here is the British-y  (that doesn’t sound right) 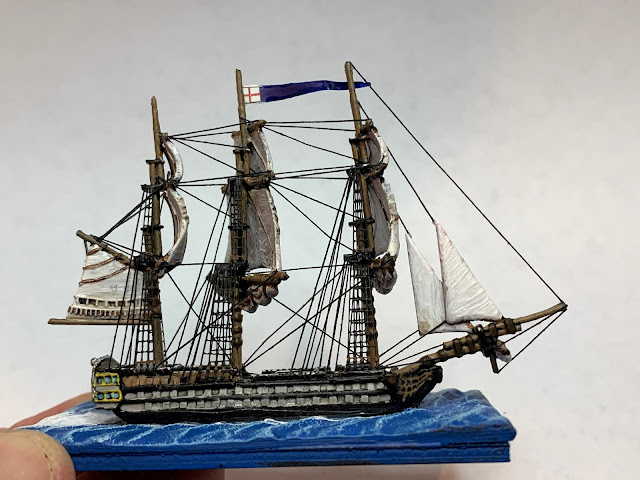 With these two ships completed and safely in the storage bin, I'm faced with the burning question that faces everyone once in awhile....  So Now What?

We've all been in the hobby funk before.  I've got it now.  With Kublacon being cancelled my hobby goal is removed and I'm sort of flailing about finding a project to hold my interest.  Like most of us wargamers, I've had these periods of low motivation before, and I know they pass; though it does seem like bad timing, because at least in theory, there should be even more time for hobbyness with the whole state being on shelter in place orders.  I have 3 known cures for hobby funk.  I'm not saying these work for everyone, but these do work for me.  They are"

1) Do something else for a little bit:
I'm doing more stuff around the house.  The wife has already re-arranged 3 rooms with me as the Manly Muscle moving the heavy furniture.  I've also thrown myself in with some home improvements like switching out some ceiling fans and changing a garbage disposal that I discovered was leaking.  It also seems like a good time to finally redo our stair rails and banister.
The main point is that I'm being very manly around the house.  I think I've described myself as manly several times in this post by now, so I'm sure I have you all convinced.  It's like taking a break from miniatures but still doing projects that engage the mind and hands, instead of just watching TV.  I'm also trying to exercise more.   This has the added bonus of earning hubby points as things in the house improve.

2) Clean the hobby desk:
A cluttered desk is a cluttered mind.  Some say it's also the sign of genius.  But what are the odds of me having the Brawn and the Brain?  No.  Actually, the more messy the hobby desk gets the less room you seem to have.

Now when inspiration / motivation returns, it'll be easy to pull out whatever project sparks it and get right down to it.

3) Start a New Genre:
This is the 'break glass in case of emergency option.'  I might have to use it.  The AWI has been calling for awhile.

In any case: I hope you all are in good health and doing well in these crazy times.  Continue to take care of yourselves and your families.
And as usual, thanks for reading.