I've had a delay in blogging and being online in general due to stuff, so to make up for it I've written and extra long post but DON'T WORRY: the spelling and editing is still atrocious.

The Gauntlet is billed as a historical only wargame convention and had a slightly different format than the other conventions I'm used to; in that there were themes for given time periods throughout the day, and the wargames played should be devoted to that theme.  In the beginning of each section there was a seminar on the historical theme presented by.. someone.  I forget who.  So the format for the weekend looked like this:

In actuality there were games that didn't fit the themes scheduled as well, so it's not like one couldn't play something else.  On Sunday there was a DBA tournament and stuff like that.

Side Discussion: Why Only Historicals

Given how sparsely these local Sacramento conventions are attended, I really don't see the need to have a historical only convention. I'm primarily a historical gamer who only dabbles in Scfi in the big three (Lord of the Rings, Star Trek, and Star Wars), but my enjoyment of playing a historical wargame and making machine gun and tank noises has never been diminished if the next table over is playing spaceships and all making laser and rocket noises.  Why cut out a section of the war gamer population?


Did I Come Here to be Lectured To?

Opinions about the format?  On the whole I liked it, thought it added a little something extra, though still a work in progress. I wasn't particularly interested in the seminars initially, but thought it was a cool option for anyone who was.  The only time I was super ANNOYED about it was Saturday morning.  I showed up on purpose after the lecture but before the gaming started because I wasn't interested in hearing about WWII.  Trust me, I learned enough about WWII from my years spent playing Flames of War and watching Ken Burns' films.  I've also seen Band of Brothers several times.  (and I've read a few books).  The lecture I think started at 9 and the gaming at 10, so I showed up at 9:45.  Now I don't know if NO ONE showed up to the lecture or if the guy was super late, but just as the WWII gaming was getting started they stopped it all in order for the guy to give his talk.  Now I felt like the seminar was being forced on me, and I was annoyed because I was just warming up my throat to make some cool tank noises, plus I make an awesome machine gun sound.   I had quotes from the movie Fury all ready in my head.  Now only to be delayed.
So after a little bit I ditched out to go find myself some fresh coffee.  By all accounts the man was nice and informative, I just wasn't interested.

I did attend the lecture for the AWI, mainly because it was timed pretty well with me having dinner and a break in the games.  It was a talk about how the historical events of Washington's crossing the Delaware and initiating the battle of Trenton influenced the design of a board game that he made about those events.   It was pretty good and I thanked the guy afterward.

The Best was the ACW lecture, which was the only lecture I was planning on going to in the first place so it shows that I have good taste.  Also not surprising because I love the ACW.  This lecture was about how small things had big impacts in the ACW but since they are small and unexciting, go unnoticed.  Unlike me, because I am large and always exciting.

Fun example!: During the Army of the Potomac's reorganization under Hooker before the Chancellorsville campaign,  Dan Butterfield (whom nobody liked) actually got into place a decent intelligence organization for spying on the CSA.  And during the campaign did a lot of work identifying the strengths and commanders of the Confederate Corps, Divisions, and Brigades.  So the Union army got to know the Confederate army really well, almost intimately. (read that last bit in a sexy voice in your head, it's fun).

This mattered because when Gettysburg rolled around, General Meade of the AOP was able to identify all of Lee's divisions that were deployed and knew that the only missing division belonged to Pickett. Plus had a good idea of how strong the units were.  And since he had a reasonable idea of the strength and locations of his own Corps (having been in command of the AOP for a whole 3 days), he therefore was able to make better decisions and win the 3 day battle.  HISTORY BLOWS YOUR MIND!

Last Bit About the Themes (I Promise)

The most successful theme of the convention was WWII on Saturday morning.  There were multiple WWII miniature wargames going on at once.  I don't know if that's because WWII is that popular or just Saturday mornings.  Or maybe the combination.  The other themes were barely represented.  But perhaps that worked out in the end, because the con was so sparsely attended that not every GM who hosted a game had players to play in it.  There is nothing so lonely than a GM who sets up his game (and all the hours of prep going into it) but have no one come to play, only to watch all the other games get played.  It's even happened to me a couple of times...it hurts even to type about it.  I'm gonna got pet my therapy pony.

Let's Get on to the Games Shall We?


Yes, let's.  Saturday morning was What a Tanker!  Hosted by the Mr. R, whom I always enjoy playing in his games.  I thought the set up was particularly nice. 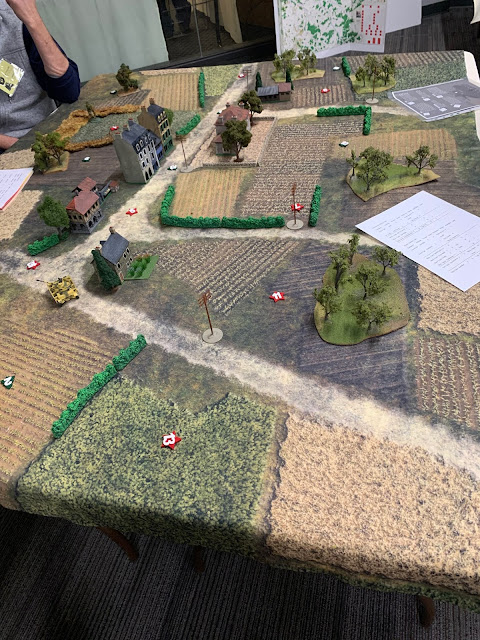 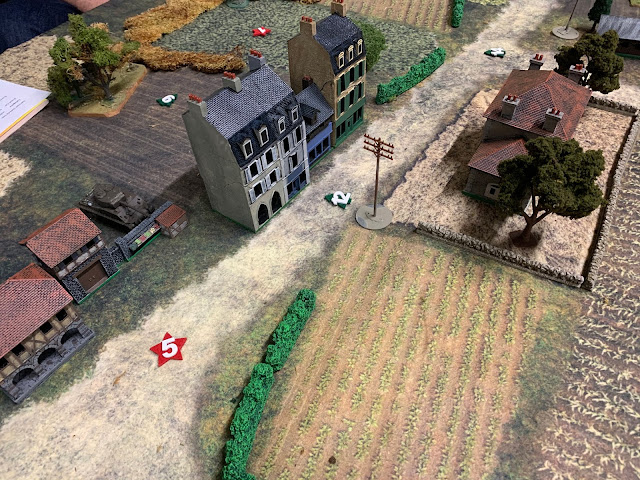 We played this game for HOURS!  It had a really fun system where players could purchase tanks from a pool of victory points whenever their current tank got destroyed or moved off the table.  you also got victory points for killing the enemy and achieving objectives.  The side at the end of the game that had more points won.


Some other WWII games... 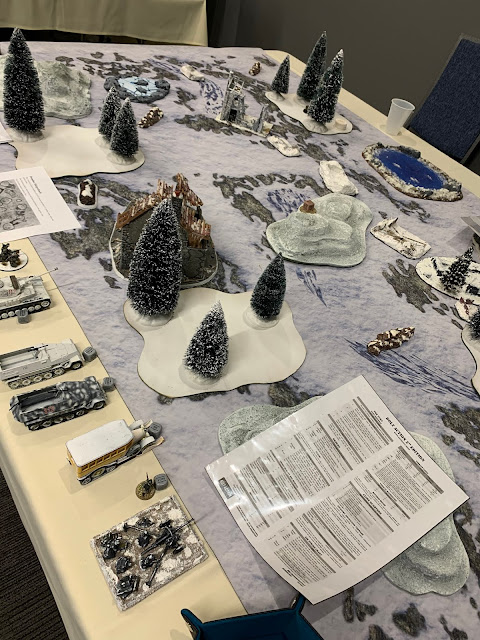 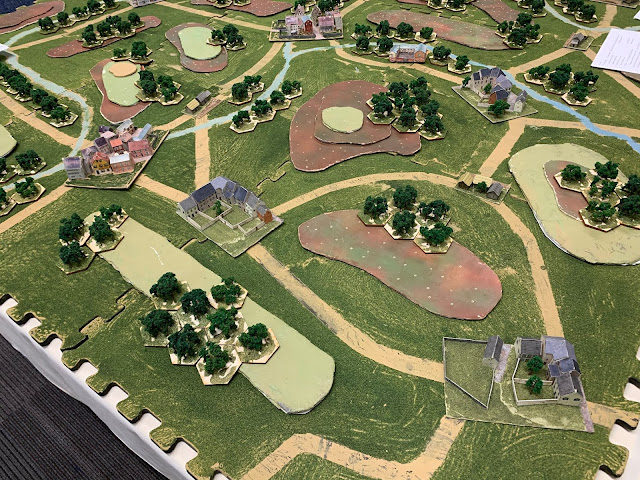 After a short dinner break and listening to the AWI seminar, I played in the BEST AWI miniature game of the con!  Because it was the only one.  It's kinda like when I tell my only daughter that she's my favorite one.

5 of us gathered to play out a scenario based loosely on Freeman's Farm (I think).  This was hosted by Mr. O and Mr. F.  10 x 6 table using 28mm miniatures and used the rules Rank and File.

The situation: the Brits are marching down the road, 2 thirds on the table with the last third off table.  Just marching along when suddenly..."what is this?  My word... REBELS!"  "Rebels across the river, up to their rebellious shenanigans!  Let's give them what for!"

I was on the British side, playing the leading British section and also the overall CiC, because I told everyone I knew what I was doing.  Some suckers will believe anything.

The game was great fun.  Scenario was something like a meeting engagement with a river running down the middle of the battlefield.  Rank and File gives a pretty good game, and it's a great convention rule set because it's easy to learn and plays fast.  Though I'm always left a little unsatisfied due to it's lack of command and control. 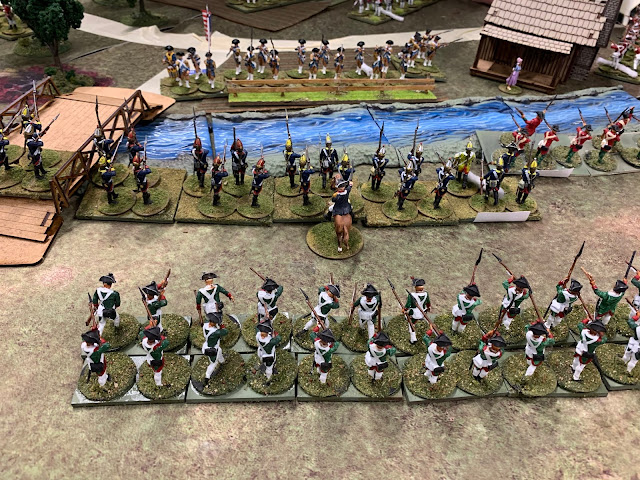 This game went late into the evening.  Like close the place down late.  Like the staff of the McCellan Center came in and said "we just wanted you to know that you guys are the last people in the building, so when you leave make sure the door is shut behind you."

Sunday Morning during the ACW theme time I hosted my ACW game.  As seen in my previous post HERE.  I can honestly say that my game was THE best miniature ACW game at the con.  Because it was the only one.  Kinda like when I tell my wife that she's the best wife I've ever had.
There might of been some ACW board games going on but I didn't see them, maybe off in another room. 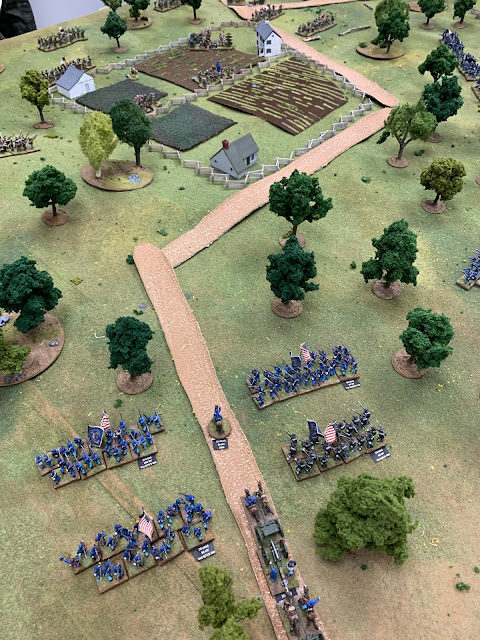 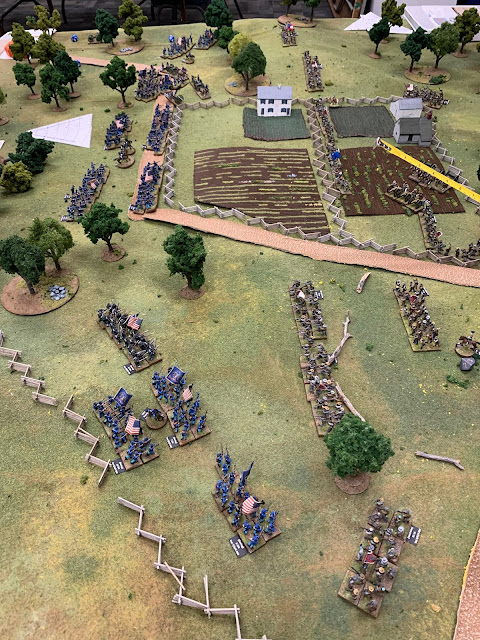 Least that means I got all 5 players for the game that I wanted.  We started playing at 11, took a break for lunch, and ceased playing at 400.  Another hour might of seen a more decisive result of the game. 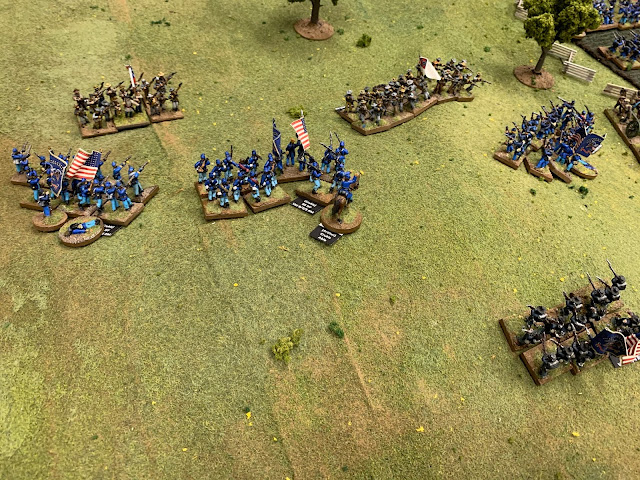 I know promised a full ARR of the game but who can remember....

I enjoyed the con and it was worth blowing a few hubby points in order to attend.  While the turn out was somewhat small, everyone's attitude was large and friendly.  Which is something like a theme of it's own for these local conventions.  But a good way to start out my wargaming year.  The next convention coming up is Conquest Sac, which is in March.  I haven't attended Conquest in a couple years but I remember it being better attended.  I'll have to see if it's possible to attend this year.

And yes, it seems that ACWary will bleed on through February for there is at least one more post featuring ACW content.  Join me for ACWruary!
I think that actually works better.