Let's wrap up ACWruary with some painted ACW troops why not.


As seen previously, to celebrate ACWruary I was painting up some ACW bases.  And now with dedication, devotion, and discipline they are complete.  It's like a life lesson in miniatures. 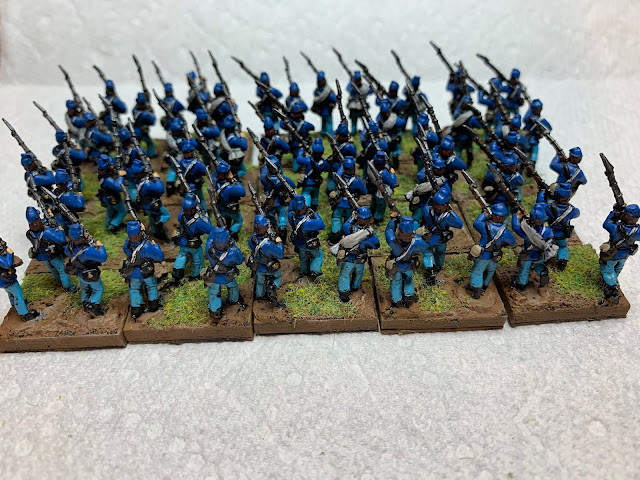 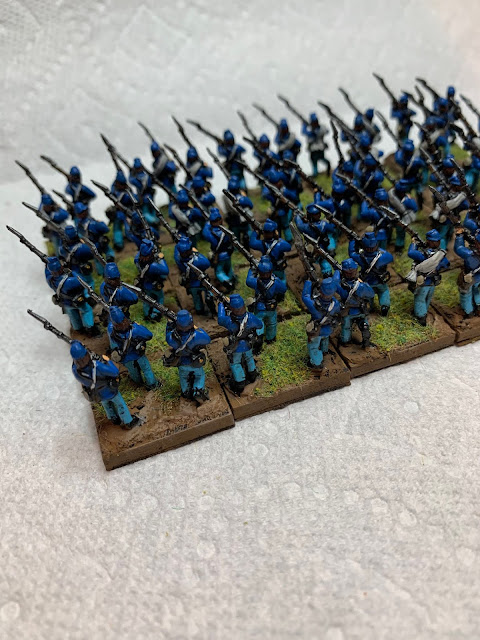 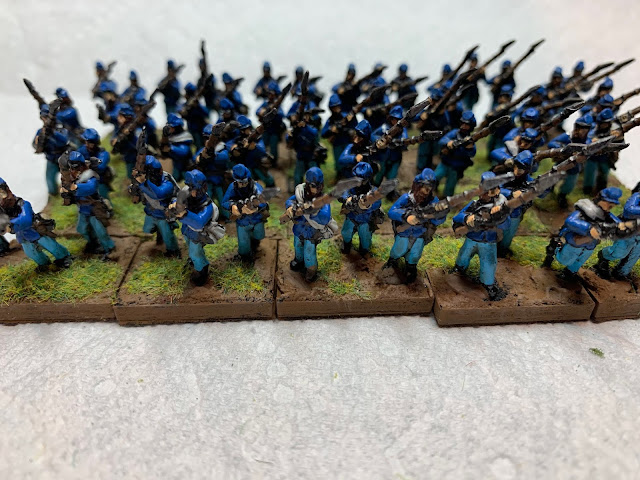 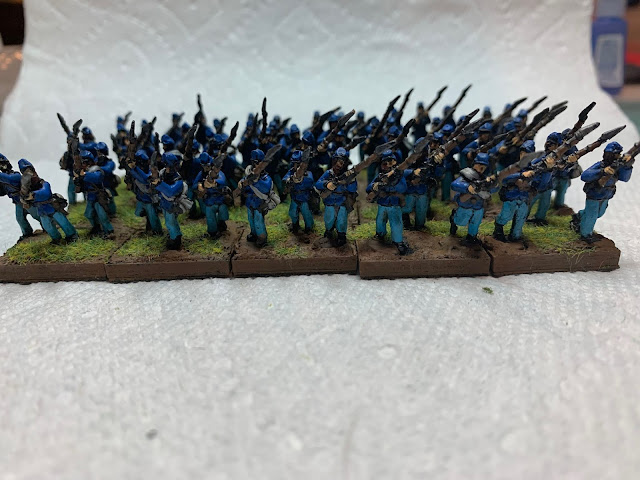 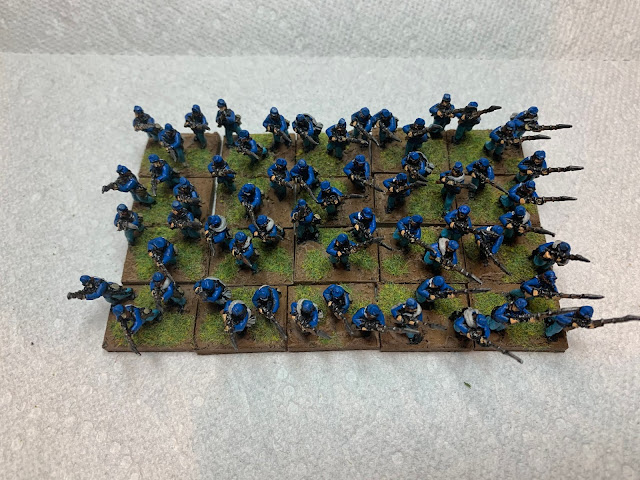 And while I was doing those I also rebased the wonderful zouave miniatures that Mr Freitag sent me.  They needed rebasing not because the original basing was bad, I just wanted the basing to be consistent with the rest of the armies. 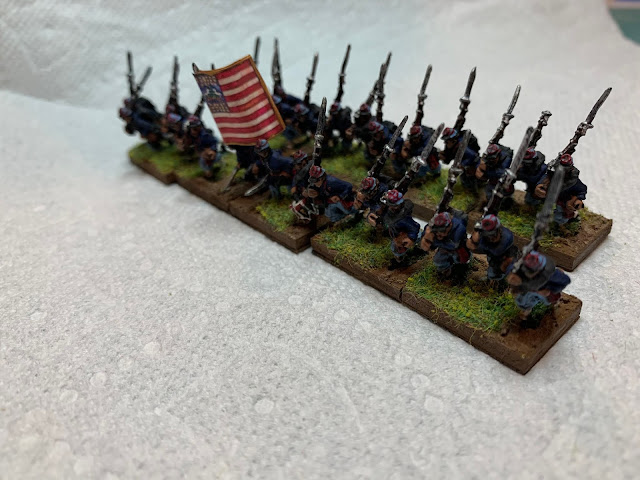 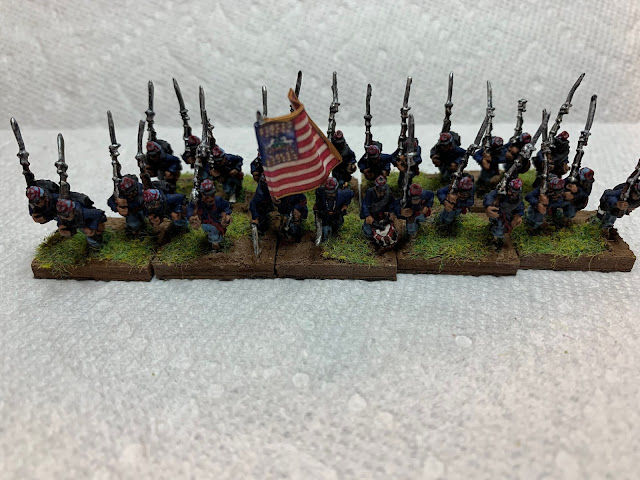 So that's a total of 29 more bases to the union side, making the union army a grand total of 168 bases strong, huzzah!
That's decent number and the CSA army is around the same size.  Though the goal is to reach around 200 bases a side, as that will allow me to host almost any scenario I can think of, or any scenario in one of my many precious ACW scenario books.  (My Pretty scenario books, all filled with interesting ACW gaming opportunities, how I love all of you so much except for THAT ONE, and it knows why).

But for the armies to reach that size it's gonna take a lot more time, effort, and discipline.  Not to mention patience and skill.  And I have NONE of those things.  What do I have?  Chiseled good looks, and I can do a mediocre John Wayne impression, and some extra cash.
Therefore, it's time to Cheat.

Regular readers will know that I've been debating doing some spending of my inheritance for this fun little hobby (can you believe that a blog as lame as this has a small following of regular reading?  Maniacs!).   Of course 95% of that un-looked for money is going toward responsible ends because when you have children, it means you have to be the adult (I guess).  Things like paying off debts and starting college funds for the kids so that if they want, they can have a string of letters after their names like their father.  That's called 'a humble brag' by the way.

But a small amount was set aside for frivolous expenses like miniature wargaming and strip clubs (around an 80-20 split).  For awhile I was thinking of starting a new genre but instead of adding to the lead pile, I thought a better use would be shrinking the lead pile of my ACW miniatures.  I contacted a guy that has done some painting for me in the past and inquired, and then this happened.

I got 90 Union and 90 CSA infantry painted up.  That's enough for 30 bases of each.  Instant success!  Well almost instant because I still have to base them.   Some people might balk at having miniatures painted for them, but I'm not one of those people.  I like it.  I do it.  I'd do it all the time if I could afford it.  I just did it and I want to do it again. 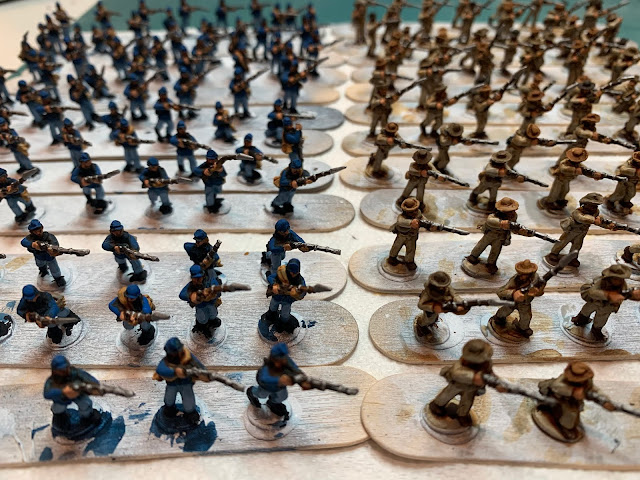 Plus, as I've stated before; I don't enjoy painting for it's own sake.  I paint because I want the results of having fully painted armies for awesome miniature wargames.  It's not that I mind painting, and in fact I like the down time and the time spent alone with no one bothering me.  It's because I'm strictly paint to play.  Painting a miniature that will not be used in a game is a waste of time.  It's the same reason why people exercise.  No one enjoys doing sit ups, but we all like shredded abs.  At least that's what people who can do sit ups tell me.

When I'll get around to basing these will depend on some choices I need to make.

The Conquest Sac convention is March is a maybe depending on my schedule, but one convention that I know I'm going to this year is Kublacon, a huge convention in the bay area, over Memorial Day weekend in May.   The hotel room for 3 nights and registration were a Christmas/Birthday present from the Wife and In-Laws.  yay!

I haven't gone to this convention in a few years so I'm very excited to go.  It's HUGE, probably the biggest convention on the west coast.  It's Friday through Monday morning.  I'll be there for the whole weekend.  The format has changed some so I'll have to figure that out.
But the big choice is: Will I run a game there?

Some thoughts and indulgent self analysis:
1) if you run 6 hours of games you get in for free.  6 hours is not that much.  But this time the registration is paid for.  Technically I was given the $ for the registration but that equates to the same thing.
2) While the financial incentive is nice, usually I run games at conventions because I like to.  I enjoy it.  I like to show people a good time and feel like I gave back.  I'm a giver by nature.  The free entrance is just a bonus.  But I'm tempted to just show up with nothing and be strictly a participant.  It's 3 hours away and it's always something of a hassle to set up and tear down.
3) And what game(s) would I run?  It would be an opportunity to run a large ACW game with like 8 or 10 players, for 8 hours, because I'm not making all these ACW infantry bases for nothing.
4) But that all sounds like a lot work.  LOL  And there is a limit on how big a game I can comfortably run.  Being a one man band when I do these things I tend to top out at around 6 players usually.  Because when one runs games at conventions you have to assume that you're going to get players who've never played the rules before, and things tend to slow down too much when you have to walk many players through the charge phase.
5) So I could run something more my usual, with around 5-6 players, in one of my many ACW scenarios.
6) Or maybe something else?  I have other genres you know, other lead piles to decrease.  Perhaps committing to running an Age of Sail game will get me back to making ships. Because nothing spurs production like a deadline.
7) Plus, transporting 10 or 12 little ships and a sea mat would be easy...
8) Hasn't this list gone on long enough?

I'll need to make my choice soon ish.  The deadline to submit games is Feb 23rd.

First World Problems.  Which is to say, not problems.  Deciding on how to have fun.  Life is so hard.

Talk to you again soon.