Finally got around to playing a game, and it was a great outing for my first time with the Brigade Fire and Fury (BFF) rules.

How the Other Half Lives

I think the vast majority of the games I play are the ones that I host.  My place, my miniatures, my terrain, my scenario, my time spent for set up and tear down, my etc..  It's not an issue because I like that sort of thing, and I don't spend time painting little soldiers and making terrain just so that no one else can use them. I like to share, no matter how ungrateful the players are...

But there's something to be said for being on the other side once in awhile.  The other weekend I was just a player for my friend A.S.'s ACW game set in the battle of Chickamauga .  I just showed up, with my trademarked blend of a good attitude and flawed tactics, rolled the dice, moved the miniatures, and  then I simply left.
Fun and Easy.  I should be an ungrateful player more often.  All satisfaction and no work.


(Of course I was a grateful player, thanking the GM and the other players for a good game.  I even helped clean up.)

I loves me the ACW, it's probably my favorite genre and I have several rule sets for it, some I've even played once or twice.  Usually I play at the regimental level (where the units on the table represent regiments) and my go-to rules have been Regimental Fire and Fury (RFF); great set of rules.


Back in 2017, the 2nd edition of Brigade Fire and Fury came out and I immediately snatched it up, and when a scenario book came out early this year it was immediately purchased. And there they sat on the self awaiting a play test.  I wasn't in a huge rush, I knew I was going to like BFF.  The core mechanics of BFF are basically the same as RFF, it just up-scales the battle from the regimental to the brigade level with a  few differences to reflect that.
So overall it's kinda like going on a date with your ex girlfriend's sister.


Will it prove to be the same awesome rule set?  let's find out.

A Brief AAR of the battle in 13 Pics


I knows there's no such thing as brief AAR that is also a really good AAR. Least not one I've ever written.  Certainly the act of writing it wasn't brief...Onward! 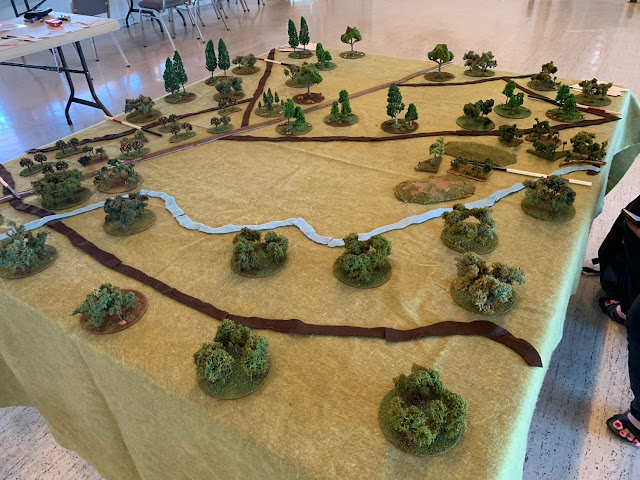 The game table and the setting for the battle.  Areas with trees based on large CD like bases represent areas of Heavy Woods.  Trees on small bases are areas of Light Woods.  The are some roads and a few clearings, but mostly wooded terrain dominates the board.  The river is impassable except for at the two fords.

I'm the CSA and we're on the attack.  The number of players will grow and shrink over the next hours but settles in 3 CSA and 2 USA for most of the game.  I'm also the CSA CiC (because people think I know what I'm doing, probably because I smile a lot and state loudly "I know what I am doing!" which is an obvious lie) so I have to decide our devilish strategy and dirty tricks.

The task is to capture the two crossroads as seen above (objective A and B).  We have the option to send forces across the ford to the far side of the river in an attempt to flank the USA in the rear.  As seen above by the far left arrow.  I quickly decided against such a foolish errand.  1) because the terrain is mostly heavy woods and would take forever. 2) The USA could easily defend the far ford with a single brigade in cover of the woods and 3) seemed to divert troops away from our objectives.
I didn't consult much with my fellow CSA generals, but they weren't sure either and if anyone looked at me too long I just smiled and said "I know what I am doing." 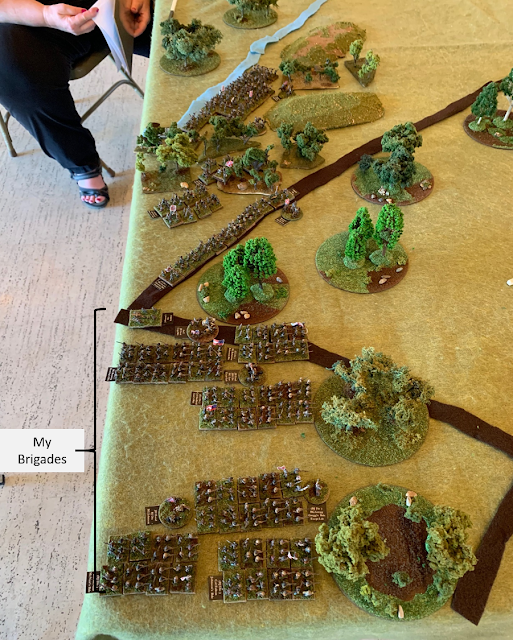 I took command of a Core, with 2 divisions with 3 brigades each with 1 battery (lower half of the pic).  Mr A.S. and Mrs G.K took another division each, and each of those had 3 brigades.  The USA was played by some nameless thugs with poor hygiene and sour countenances.

Here also we have the timeless debate;  Is it better to deploy in the formation of field column or battle line when in the heavy woods.  Field Column lets to you advance faster through the terrain but then you lose a turn redeploying into line in order to fight.  Start in line and you advance slower, but at arrive ready to fight.  One day I will sit down and do the math to see which is really better.  I opted for field column because it seemed the thing to do, and I had to preserve the image of knowing what I was doing, because everyone else was deploying in columns. 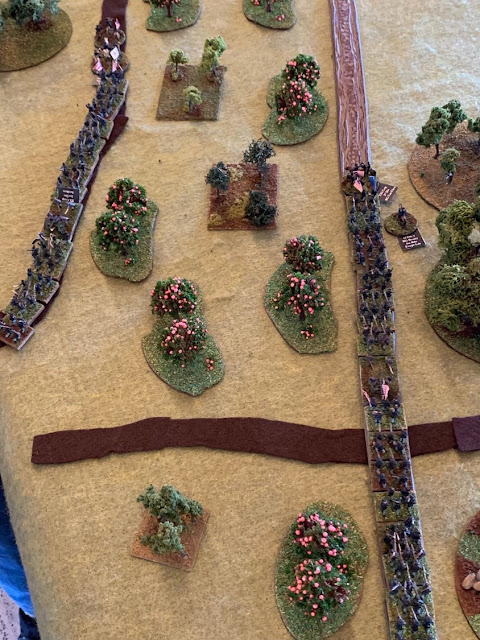 The union actually had the advantage of deploying first and the extra fast routes of advancing down good roads, the dirty cheaters. 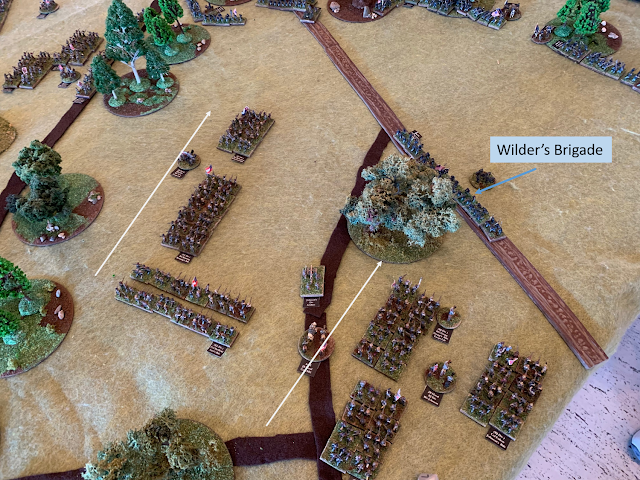 My brigades advance!  I have it in mind to throw one division through the clearing towards one objective and one division through the heavy woods towards the other.  The immediate problem is the union Wilder's brigade guarding the cross road in front of me.  These guys are going to be a problem, since they are armed with Spencer repeating rifles, giving each base the fire power of two of mine.  Not to mention I'm going to have to fight through the heavy woods. 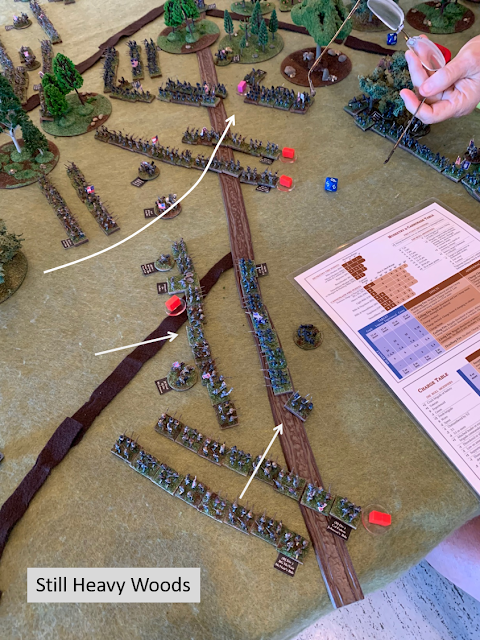 The attack becomes general.  I spend a turn shacking out my brigades into line in order to be an effective fighting formation.  I send one brigade through the woods to confront Wilder's brigade head on through the heavy woods.  The trees have been moved in order to make room for the soldiers, as happens in almost all miniature wargames.  The table is only pretty for the first couple of turns.  The two other brigades in that division move up the flank in order to encourage that troublesome brigade to move out the way.  My division on the left moves toward the other crossroads.  The union enjoy a strong position at the edge of the heavy woods.  That lead brigade is taking a lot of fire on the way in. 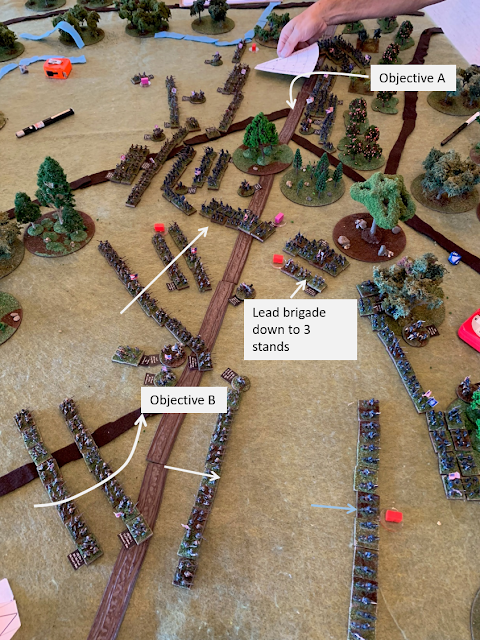 After a brief fire fight, Wilder's brigade mounts up and retreats.  I personally think they gave up too easily.  But with Objective B firmly in my hands (told you I knew what I was doing),  One brigade advances just past the road to guard against a union counter attack, but it never comes because the cowardly mugs don't want to leave the cover of the wood line.  However Objective A is still in union hands so I start to shift brigades toward that way.  unfortunately there is a solid line of troops firing incessantly blocking the way.  My lead brigade continues to take the worse of it and is worn down to only 3 stands from 10. 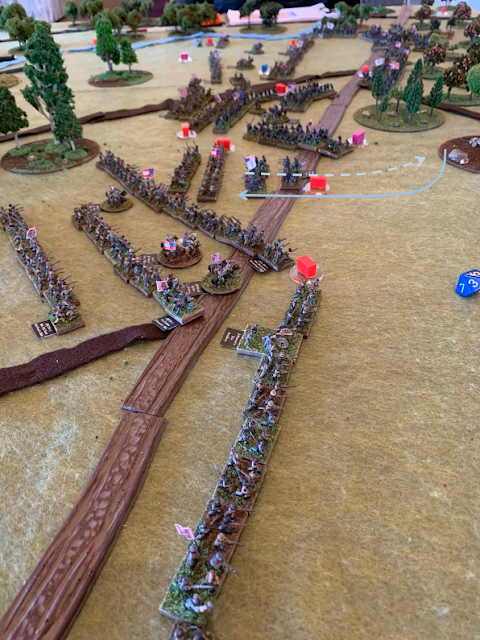 The union are without they're own dirty tricks though, and there are a series of counter charges that wipe out my lead brigade and charge into the next ones.  (Not all pictured).  Except for the lead brigade being taken off the table the union come off worse for the wear for their efforts.  But these succeed in ramping up the CSA causality count and delaying the advance. 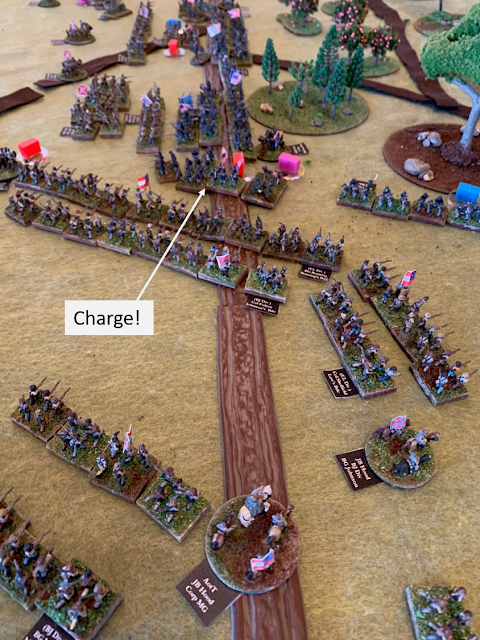 END GAME;  All across the lines there are charges toward the final objective.  I can honestly say I have a near perfect charge going into the union. I got the (mostly) fresh veteran brigade, with leader attached, supported by another brigade, bearing down on their target which is a small union brigade with a damaged battery attached; with the whole attack in position to roll down the union line and sweep into the final objective.  It's near perfect because;  it would of been better to be in supported line instead of the line (a double line versus a single one).  For that  single line stretched far enough that the union is able to cobble together more defensive fire power than I would of liked.  After all the fire points are calculated we know that the union will need to roll an 8 or higher on a D10 to prevent the charge (in fire and fury the defensive fire can be so hot that the charging infantry stops).  1-7 sees my devastating charge go through.  Good odds says I.  I told you I knew...

So instead of charging into the hapless but lucky union,  my brigade stops and shoots instead.  Sigh,  The two other CSA charges on other parts of the battlefield are also unsuccessful.
After that; A.S. announces that the CSA have reached their heavy casualty limit of 34 stands dead (at least 13 of those are from my command, so it's been a bloody attack).
That's usually a good time to call a game in Fire and Fury, if one side has suffered heavy casualties and the other is not really that close.  Union victory 2-1; They have 1 crossroad and have killed way more CSA with small loses, while the CSA has one crossroad.

I do think IF we had played two more turns it might of been a different story.


So how did the rules play? BRILLIANTLY.  My first outing with the BFF rules and I loved them.  Not surprising with my love for RFF, but right now I'd be hard pressed to decide which one I liked better.
On the whole I'd say BFF was a shade simpler. The ranges are a shorter, there are less modifiers, a more traditional roll to activate a unit mechanic,  etc.. which would make it a better convention game.
While RFF leans a little more toward the tactical, BFF leans a little more toward the strategic.

I'm definitely gonna have to take a real hard look at the BFF scenario book and see which ones I'll be able to put on the table.  There are a few that I have enough troops for, it's the terrain that might be the challenge.


Man did this make me want to play more ACW in the near future.  Just need to find the time, which is the trick of course.  In the meantime, the wife and I have been off celebrating our 10 year marriage anniversary. 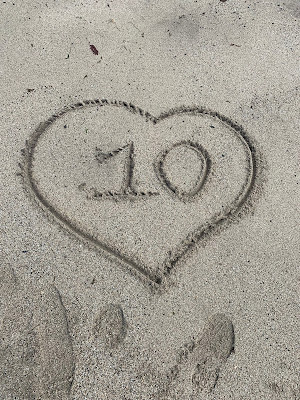 which is why this post is like 2 weeks after the game and I've been behind in my leaving of blog comments.  "yeah 10 years is a big deal Sweety, but I just want to check my blog list..."