Gearing up for more GW Lord of the Rings


A post in which we talk about doing more LOTR.
and I complain about not having anytime for fun. 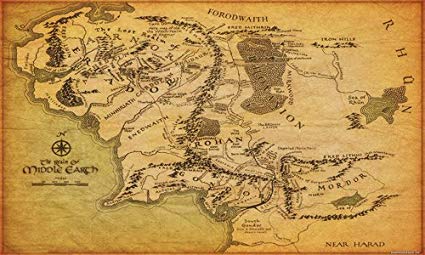 
With an enjoyable and successful game of Middle Earth Strategy Battle Game under my belt, now seems like a good time to fall down this hobbit hole.  There are several projects that I want to do, and it's a nice break from the normal most serious historical gaming.

Plus, looking ahead, it looks like the first Wargame convention that I will be able to attend is near the end of July called "Intergalactic Conquest."  This is the 'midsummer conquest' convention that I attended last year with a name change and a sci-fy theme.  LOTR is about as -fy- as I get.  But for the first time in forever I could actually host a game that fits the theme.
(when you have a little girl in your house, the songs from Disney's Frozen are never far away)

Right now I'm thinking of putting on a series of linked games from the Gondor at War supplement but we'll have to see how much stuff I get done first.  It's a good time to start with about 3 months till wargame convention weekend.  Depending on what else happens in life, this means I could get as many as 5 miniatures painted.  Or maybe more.  depends if I do highlights.

Alternatively I could just put on 1 or 2 larger style battle games set in LOTR lands.  Either from the scenario book or just make something up.

Painting up LOTR miniatures heralds my glorious return to painting 28mm.  I think it's been about 2 years since I painted anything 28mm as I've been focusing on 18mm ACW and 1/1200 ships.

28mm seem pretty huge in comparison, so on the upside, painting the details should be pretty easy.
On the downside there are more details to paint, and I have to remember how to paint faces.
-that last statement was misleading, because it implies that I knew how to paint faces in the first place.  I will say this though: a nicely detailed 28mm miniature makes me want to paint it the best that I can, with extra time and effort, as opposed to those tiny 18mm figures that just get the bare minimum.

First project: let's paint all the those black-primed models from the last game, because they'll be used in the next game if I follow the sequence in Gondor at War (and why wouldn't I).

To warm up and shake out the kinks of my rusty 28mm painting skills, I painted up some Rangers of Gondor. 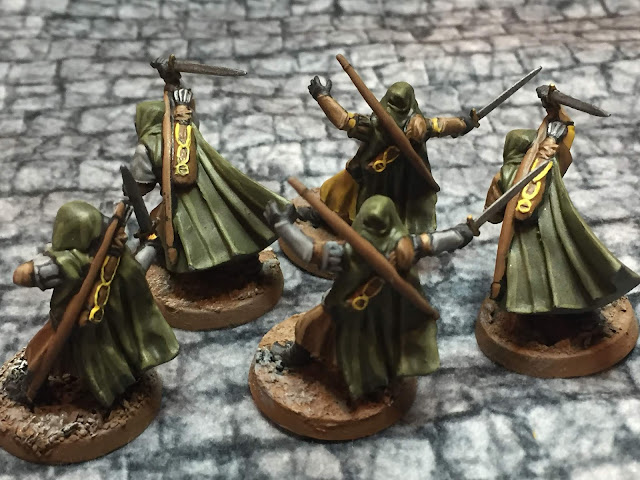 I swear, these guys just look like woodland themed ninjas.

Feeling that went well, I turned my attention to the heroes.  I painted up the Madril model 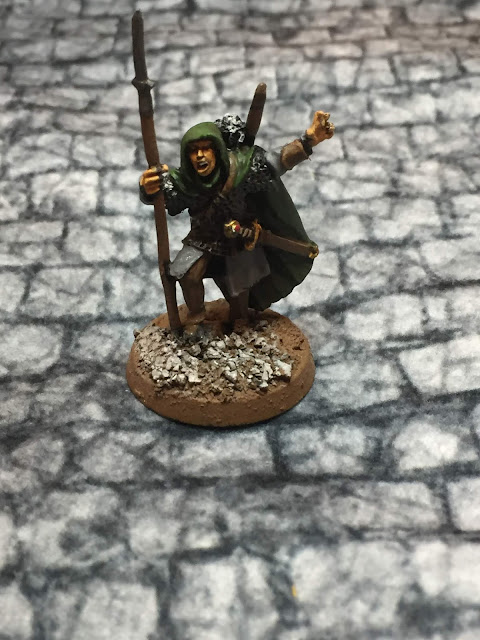 No it's not the actual proper Madril model, this is a model of some guy called Duinhir.  But I don't have the proper Madril model so this guy will have to fill in.  No one will notice anyway.
and even if they do?  This is not for a tournament where everything needs to be WYSIWYG.  I have no problem proxying one fictional character with another fictional character, especially when it's not an iconic character.
Do you know who Madril was from the movies?  I doubt it.

He's best friends with Faramir.  In the movies he tells Faramir that if he lets the hobbits go, his "life will be forfeit."  Nothing every comes of it though.  And Speaking of Faramir... 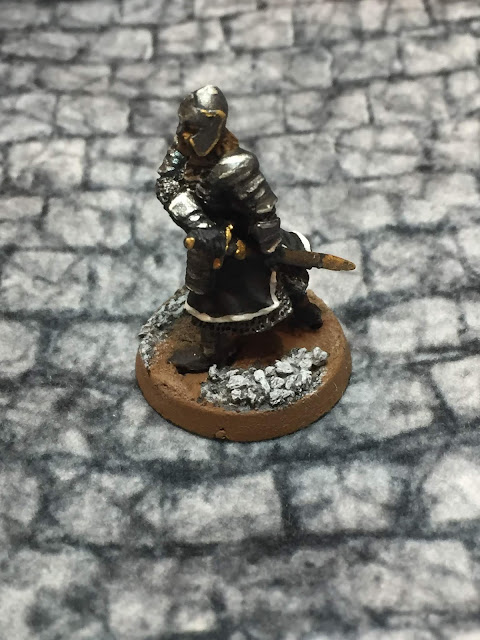 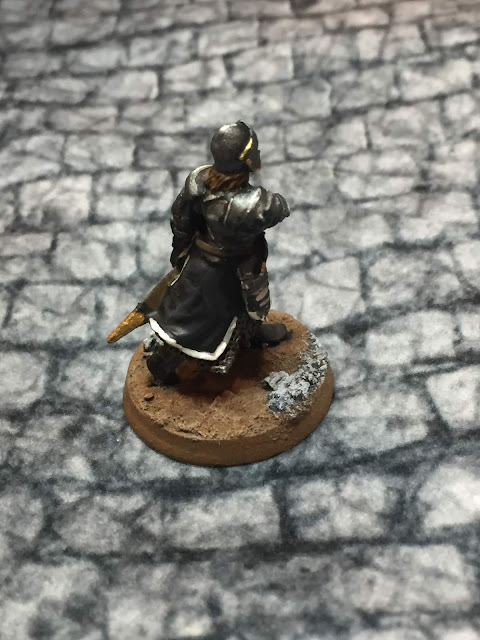 A lot of my LOTR collection are old models painted a long time ago, some almost 10 years ago, and my painting has improved just a little bit since then.  Least I think so.  While it's probably not worth my time to repaint all of the old models, I did want a better painted Faramir, one of my favorite characters. I had this miniature of Faramir in the lead mountain (of DOOM).  I've always thought this pose of drawing the sword for battle was the best, out of the all the available Faramir poses. 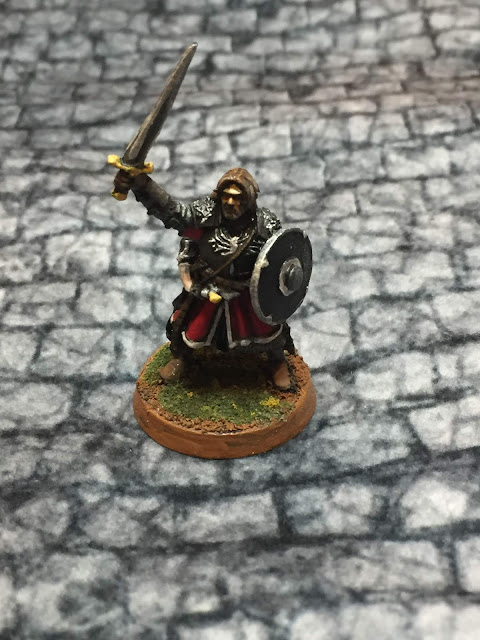 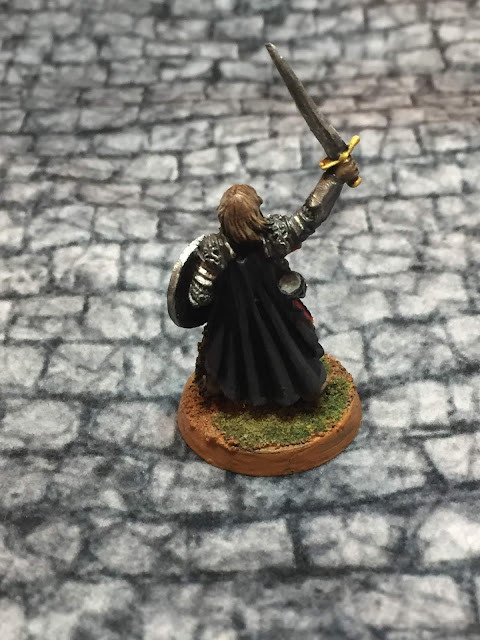 I also touched up my Boromir who guess stars in the next scenario.  Though he's supposed to be carrying a banner, so I'm gonna have to print one up and attach it to him somehow.  There's a plan in place but no time yet.

Now all of the good side is at least painted from the previous scenario (Defense of Osgiliath) and the next two scenarios (Retaking of Osgiliath and the Fall of Osgilaith).  Good side: DONEZO.

I might redo the bases on the older troops so that everyone matches and looks more uniform, and to be more cohesive with the the stone pattern in the wargame mat I'm using for my Osgiliath and Minas Tirith from Cigar Box miniatures.  But rebasing is SUCH a chore...


But first I want to complete the evil side, as it had some bare black primer miniatures as well. 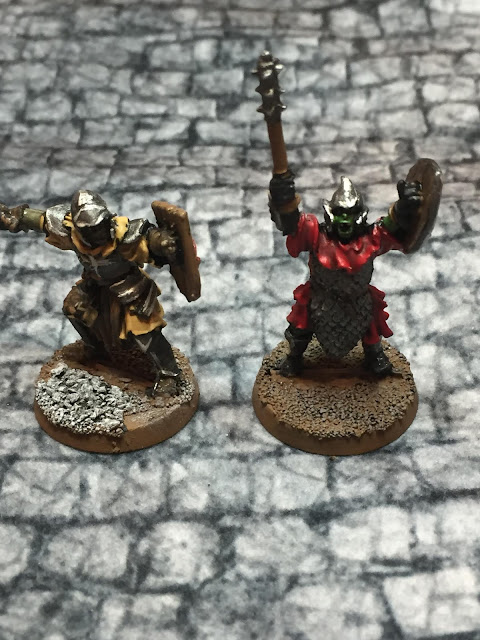 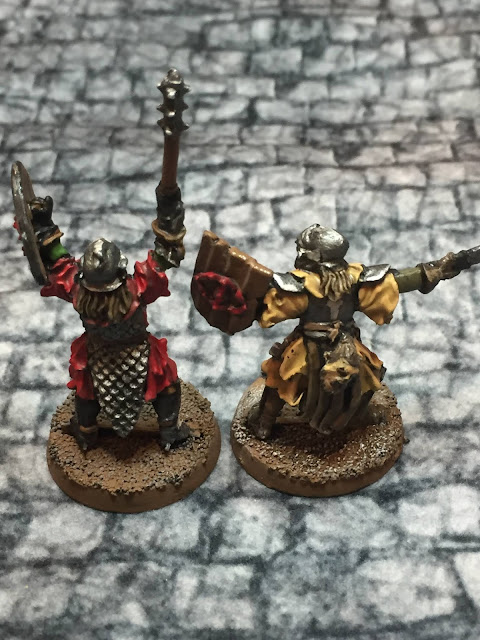 I painted up these two Orc Captains.
Not much to say.  There they are, all painted like. 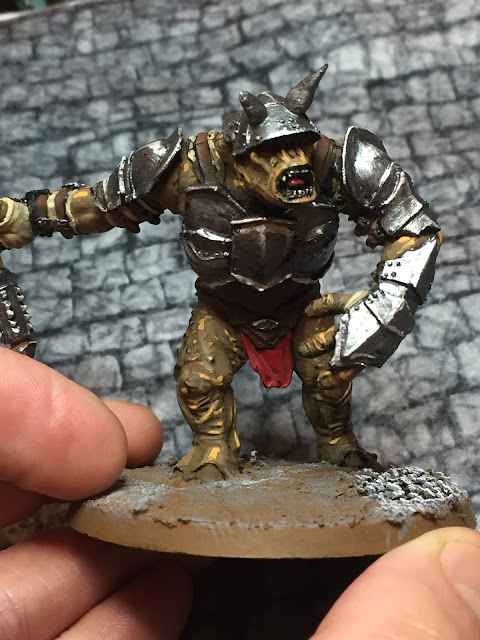 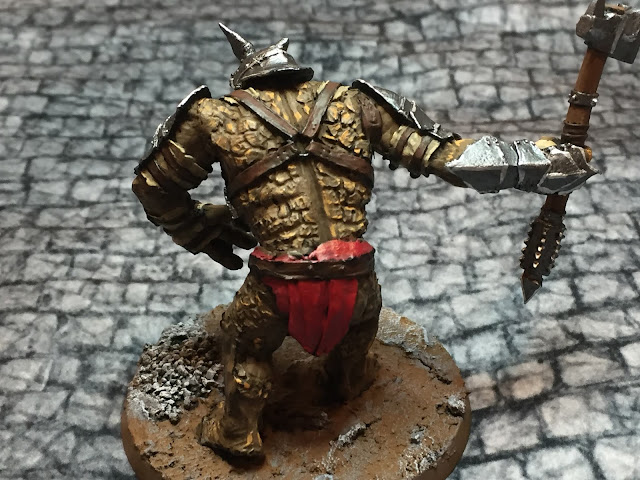 and the next scenario requires a TROLL.
This model has sat in a drawer for years in nothing but black primer.  In fact, it's so old that it's actually made of metal and not plastic.  I guess it was time to finally paint it as it's waited long enough in it's dark troll hole.


The Osgiliath ruins are coming along well, but the table still looks a little empty in places.

especially if I'm going for that 'cramped, ruins all around us' feel.  I'm gonna need some more walls, some pieces of scatter, and more buildings.


To get the snowball rolling, I took to the garage and unleashed the super sexiness of power tools.  I made sure to tell the wife what I was doing so she could come and gaze upon me with wonder and longing.  She snapped this picture of me while trying not to laugh...


After a short amount of time, (because power tools make working faster), I had stack of bases in various sizes for later. 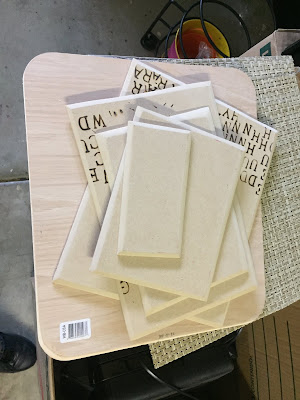 Maybe you've heard of a debt snowball? Well the idea of a terrain snowball is the same.  Start with the smallest base and make it into a terrain item of some sort.  When it's done move onto the next larger base, and so on.


Other Feats of manhood that I accomplished lately..


Enough Foolishness with the Pictures.

Fine.  Back to the hobbying:

The only snags with making terrain from the Hirst Arts molds is that the process is kinda messy.  Dust and small bits of plaster gets everywhere and it takes a lot of space on the hobby table, and by a lot of space I mean aaallll of the space.   So once a terrain project is started it has to be finished before something else can be started.  Therefore the terrain projects have to be manageable and able to be completed in a somewhat reasonable time-frame.


I'll be engaging in an exciting cycle of: painting miniatures, make terrain pieces, and trying to squeeze in playing a game or two.  Rinse and repeat. Fairly standard thinking on my part and a statement made by every blog ever. Utterly conventional.  I was never accused of being an original thinker.


We'll see how it goes.  Right now life is conspiring against me and forcing me to attend to important matters but that's how it is sometimes.  These important maters include Son#2 first birthday, wife#1 birthday, mother's day, a whole slew of chores, and traveling down to southern California and spending about a week and half down there getting my father's house ready for sale (the house that I grew up in).


Hopefully I'll be able to carve out some more time for relaxation and gaming in the upcoming months.  🙂