Now Where Was I,... oh yes, wargaming blog

SOOOOooo how are you?  It's been awhile.

There was a short interruption in blogging due to growing family responsibilities, in that the size of the family grew with the birth of son #2 in early April.  This has been coming for awhile now ( I wasn't really surprised), and accounts for the shockingly low number of games played in this year.  I'm gonna have trouble hitting the goal of 24 games for the year; I should be at 6 by now and only have 3. 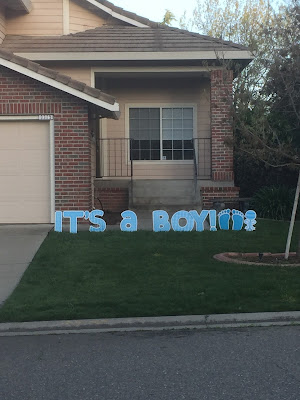 Though one benefit of being a slightly older father is that one is somewhat more established, and I've been enjoying a long Paternity leave from work; and will do so until mid May.  Going into my paternity leave I had some excitement that I would get SO MUCH hobbying done.  I mean, I just gained 40 hours a week (not to mention the time spent commuting), and even if only 2 of those 40 hours could be devoted to hobby stuff and the rest to new baby and family or whatever, then I really should have lots more time to engage in painting and such, right?

That was a totally wrong assumption, and there I was, many weeks into my leave and I'd done ABSOLUTELY NOTHING for wargaming except doing some online searches for cool wargame stuff while the wife was in labor.   No, that's not true.  Well it's not completely true, but definitely true during the boring parts, and the whole process takes like ALL DAY...

Staying at home being devoted to family is great and all (or NOT great, depending on moods), but it seemed that whenever I try to sit down for some panting and hobbying, this happened:


There I am in ALL MY GLORY.  I'm sure I'm even more handsome than you imagined.  Just another average gamer. It's amazing what calories and time will do to a man.

Persistently picking up where I left off...

So with a combination of buckling down,  the family finally settling into a rhythm of a new normal, and greatly spurred along with a growing sense of desperation that I was going to go crazy without some downtime; I returned to the hobby desk to see what was about.  I found that large ACW project right where I left it:  making a bunch of artillery limbers and markers.


Now this is a project I've been putting off for a long time now.  I'm not sure one actually needs Limbers to play ACW.  So far I've used a complicated system that if the guns were facing the enemy they were unlimbered and if facing away they were limbered; without any distress and confusion.  And while they do pretty up the table they seem like a lot of work for little gain.  However every ACW rules I like do require markers for when guns become damaged or run out / run low on ammo.
But since I was fool enough to order limbers in the first place I might as well make them.  I'll probably be glad I did; is what I am telling myself.

And as an added bonus, this is the only project cluttering up the hobbydesk and I feel a rush of excitement when I clear off the hobby desk with completed projects!  A sense of freedom to start new ones!  A sense of accomplishment that something was done.  I probably need to get out more.

I also received extra motivation in that a couple of the blogs that I follow where doing great posts with ACW content (I'm looking at you Tony, Dan, Norm, and Matt, so thank you!).  Nothing motivates you to paint miniatures that you only half wanna paint more than reading cool content on the same genre.


Limber UP!  or Artillery Accessories

Just under the wire, with a week or so left in my leave, I finished these.  It took forever, but at least now I can say I was productive during my paternity and completed something!  : )
And I'll cut myself some slack as I did paint 46 horses for this project, and horses always take longer to paint.

16 limbers completed, and with my sleep deprived mind instead of making 8 for the CSA and 8 for the USA as intended, I gave the USA one extra (so 7 CSA and 9 USA).  It was an easy mix up to make because 1) I'm biased toward the Union and 2) the only thing that differentiates a confederate limber from a  union limber is the uniform of the guy sitting on it. 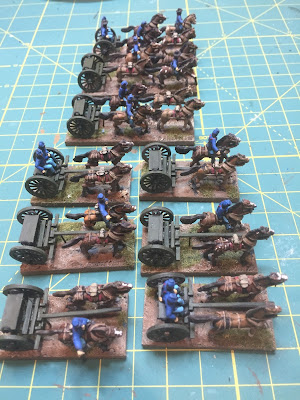 Hey, this isn't Naps, where the Franco-Prussian-Australian artillery batalion was a different color than the British-Spanish-Brazilian one.  : ) 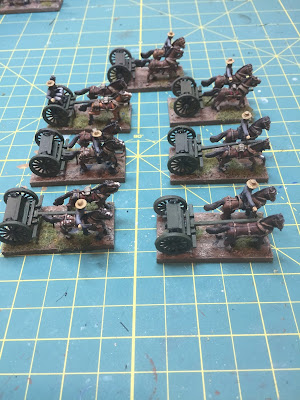 While at some point I know that I'll have to add more limbers, I'm thinking 8 markers each of Low on Ammo (the ammo boxes) and damaged battery (dead horses) will be enough.. 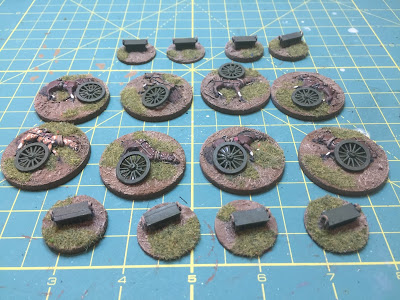 So I'm planing on getting back to posting more regularly as I was, about 2-3 times a month.  But now with a clean hobby desk, where will the next project be?

Thanks for reading.  Comments appreciated.