I really like the Army Painter Quickshades.  It adds shading and protects the model, and fits my painting style of doing a larger bunch of miniatures at once; making an effort to make each miniature decent but not painstaking.  There are some tricks to it, but overall it's pretty forgiving.  It's only big draw back is of course, it leaves the model looking very shiny.  Requiring you to apply a matt varnish to model.  Enter the Army Painter Anti-shine Matt Varnish Spray.


I really dislike the Army Painter Anti-shine spray.  I love it when it works, but it does seem SO super finicky and sometimes ends in disaster with the dreaded frosted effect where it looks like the model has a layer of ice on it like it just finished giving Princess Elsa a hug.  Or the frosted sparkle look from the Twilight movies with the sexy vampires (or so I've heard; it's not like I watched the movies or know what I'm talking about but I was team Edward all the way.)


There's almost too many things that can go wrong with the anti shine spray, leaving your miniature with this terrible glassy effect: it can be too humid, too cold, too hot, sprayed too close, sprayed too soon, sprayed too heavy, or the can not shaken enough...  in other words lots of room for human error.  I am very prone to human error.

My recent project with the ACW limbers suffered this (see previous post):  I had a new can, it was 81 degrees outside, Humidity was 33%,  but maybe I didn't shake the can enough in a counter clockwise motion while singing the national anthem long enough before I sprayed the miniatures because they all came out frosted like they were all made of stars (remember that song?)

I sprayed the miniatures after letting the quickshade dry, and saw the whole bunch start to frost up.  After some cursing the world and drying my tears, I took some pictures for examples but not a single limber escaped the terror;   can you see the frosting?

This has happened before, but in smaller numbers and not to this degree; this was the worse because it was significant and on all the miniatures.  I might need to re-evaluate how I mat varnish my miniatures.

But the Solution was Actually Simple.

I did some internet searches and read some stuff on TMP.  Now that I know what to do, if this happens again then I doubt I'll have as much angst as I did.  The solutions I read were all basically this:  let the stuff thoroughly dry and then basically try it again. Except one person stated that you rubbed the miniature with Olive oil, which seems like a strange thing to do; and I have a hard time imagining a thought process that would lead to such a conclusion.

So a few hours later I tried to mat varnish again, but not trusting the spray, I found my little bottle of brush on Vallejo Matt Varnish. 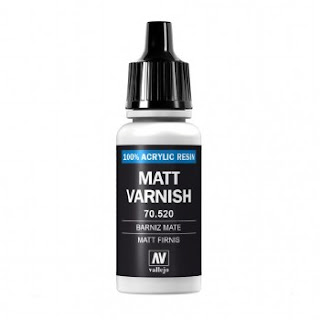 As you might surmise:  I use this small bottle of Matt Varnish when I'm doing a small number of figures and I like the spray when I'm in a more productive phase...

I painted the Vallejo Matt Varnish over the sparkly-frosted miniatures and was pleased to see that it did the trick ad significantly damped the damage.  I took some pictures of the same miniatures after the Vallejo so one can compare and contrast....These are in the same order as posted above. 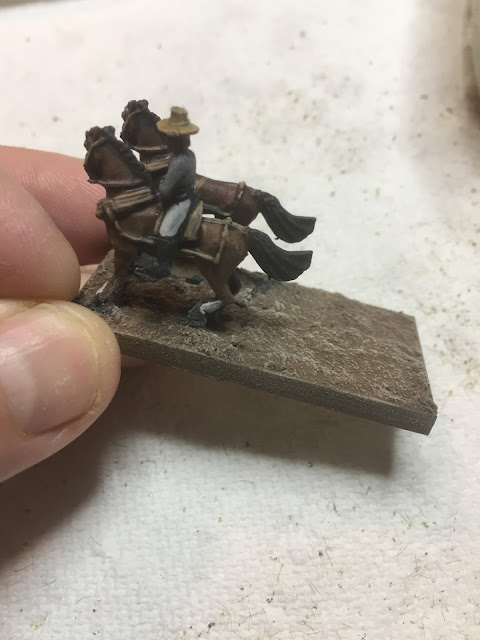 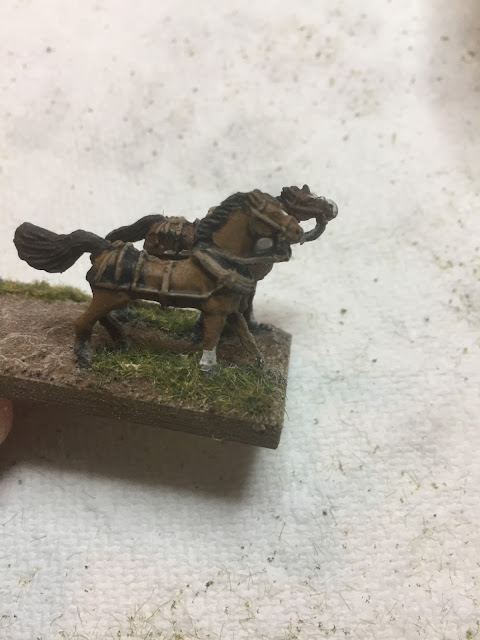 All better now; brushing on matt varnish over the frosty spray varnish seemed to do the trick.
So I went ahead and repaired all the frosty sparkly miniatures and no one would of ever been the wiser except for this post and my own big mouth.

Those that did not see the previous post can see how the completed miniatures turned out by looking  HERE  <--link to previous post.

This frosty / sparkly effect from spray varnish is an issue I often see on TMP.  Sometimes I question the utility of using it at all.

Overall this turned out to be a fun little adventure in miniature hobbying.
Hope you might of found this post useful and a little humorous.
Posted by Stew at 7:14 AM