My immediate future is the far distant future in SSSPPPAAAAACE.

Last year I began to dabble in some Star Trek ships for some space gaming; kinda on a whim.

Painting will now go into warp speed as there happens to be a local convention in March called Conquest Avalon which is exclusively focused on Sci-Fi and Fantasy.  I thought "What an opportunity to become phaser focused on getting ALL these ships ready for the game table."
We last visited the Star Trek topic back in August last year with this Post that focused on the Federation, but I've been silently working away on the Klingons during my hiatus.  All behind the scenes, all stealthy,  like Klingon starships cloaked and lurking in ambush...hidden from sight.
Star Trek 1/7000 Klingons
Going from small to large: Let's start with everyone's favorite and most recognizable: the Klingon Bird of Prey.
Bird of Prey (Kvort Class) 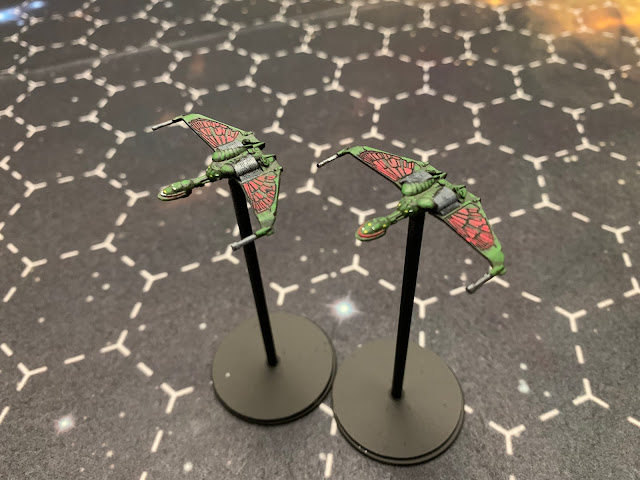 Like all my ships so far; this is from Shapeways and is the "aggressive little cruiser" from Nova.  Now super cool trek nerds like me (because I have joined you, my fellow trekkies) know that the in-universe size of the Bird of Prey is ALL over the place going from small, to medium, to super large in a variety of class names (but the names are in Klingon so they all sound the same).  This is because while making the movies/TV shows modelers used the same ship and just up or down scaled it as the script needed; sometimes the ship is shown as a small one or as a large one.  I would of expected more consistency from a Sci-fi universe.  The B'rel class is the small version and the K'vort class is the bigger version. I went with the big version because I thought that matched my perception of what the ship is: something like a frigate (bc star trek to me is just ships of the line in space) and at 1/7000 scale it's still a small ship on the table.  Plus I like the word K'vort because that sounds like a sexy dance while B'rel sounds like a hair removal product for ladies. 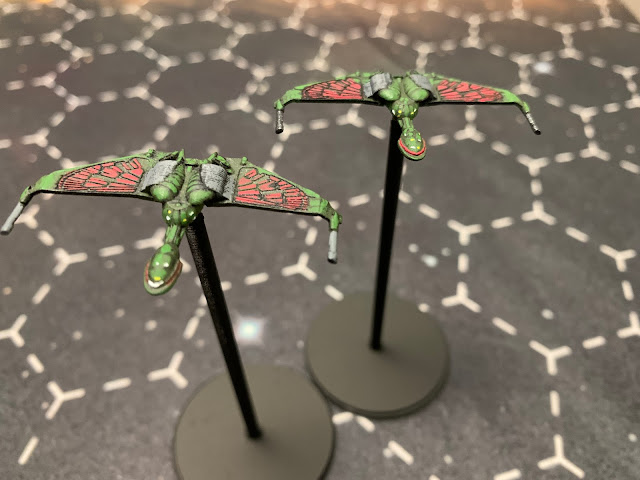 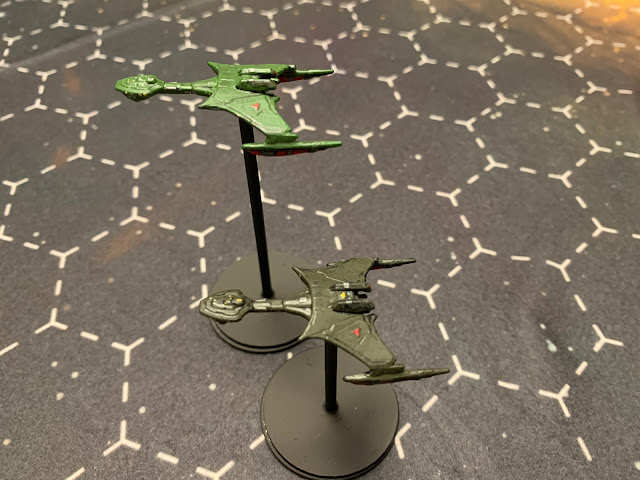 "WTF is a Renegade??!!!!'"
Easy trek nerds, remember I am one of you now.  I'll explain.
In Star trek the The Original Series (TOS) the Enterprise was a Constitution class starship and the Klingons had their equivalent the D7.  Now I am on the record for stating that I really don't care for the look of the D7 (stupid ship looks like a stupid snapping turtle with a stupid hat on it*); and I'm more of a Star Trek Next Generation (TNG) or Deep Space 9 (DS9) type of guy.  By that time in the franchise the federation had moved beyond the Constitution class and onto the Excelsior class; which is what I have in my federation fleet.  Now for some reason the Klingons didn't do this and kept on using the D7.  It got a slight facelift as the K'Tinga class but really it's still a D7.  kinda like if I went to a tanning booth: I'd be tan for the first time in my life but I'd still look like me...
So I wanted a Klingon medium sized ship that was not a D7; and found this ship on Armadillo miniatures that is based off the Klingon ship in the fan made youtube series  Star Trek Renegades; which might be terrible or great, I dunno because I didn't watch it. But this Klingon ship is perfect for my needs; like when a blind date accidently admits she likes the same kinky stuff you do.  The ship looks cool, fits in better with the TNG era ships, and it's the right size being bigger than the BoP and the D7 but smaller than the Vorcha (see later in the post for the Vorcha).
*EXCEPTION: David's D7s that we've used for Klingon Armada are way cool.  After some futile resistance they have flown into my heart.  Maybe the models just look cooler than the media.  I'll probably get some D7s eventually...
This ship was even featured on Trekyards on Youtube, where two guys talk about star trek ships almost as if they were real.  so I think it's official enough.  I called it the Renegade Class because I never picked up it's name other than "that Klingon ship from Renegades."  And Renegade just sounds cool to my mid forties -stick the mud-stable routine- boring family man ears.
There you go trek nerds.  Now we can all be friends again.  Give me a smile...
Vor'Cha Class 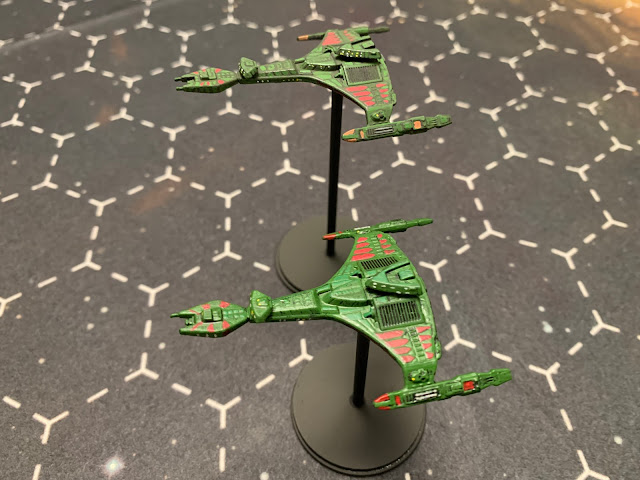 In the never ending arms race in the Star Trek universe (which was all about peaceful exploration) The Klingon Vor'Cha class was the response to the Federation Ambassador class.  It made it's first appear in TNG and several more in DS9 when it got it's official cannon name because it was spoken in dialogue! That seems to be a trek rule.
I think the ship design looks the biz-ness so I'll have several.  Any good Klingon fleet is gonna have lots. 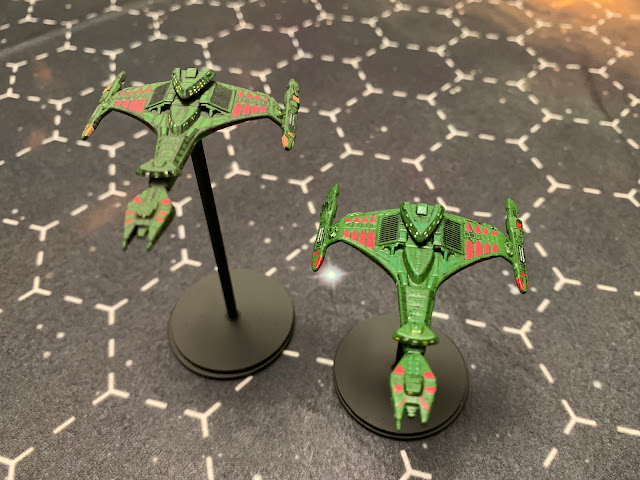 When looking online for visual references to get an idea of how the ships are supposed to look (which I don't take too seriously since it's all made up) there are exciting pics of Klingon ships with the super cool red fire bird markings on the wings and there are boring pics without them.  Obviously I went with the super cool red accents more often than not.  I think it looks good, but it does run the danger of the Klingon ships looking like Winter Warriors from the planet Christmas.
And Lastly we move on to the...
Negh'Var Class 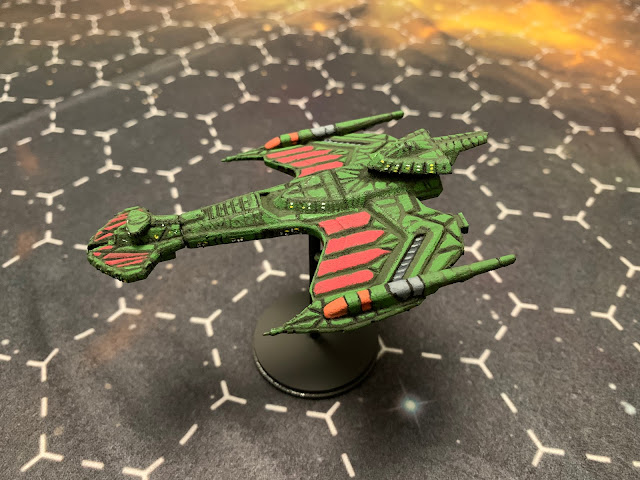 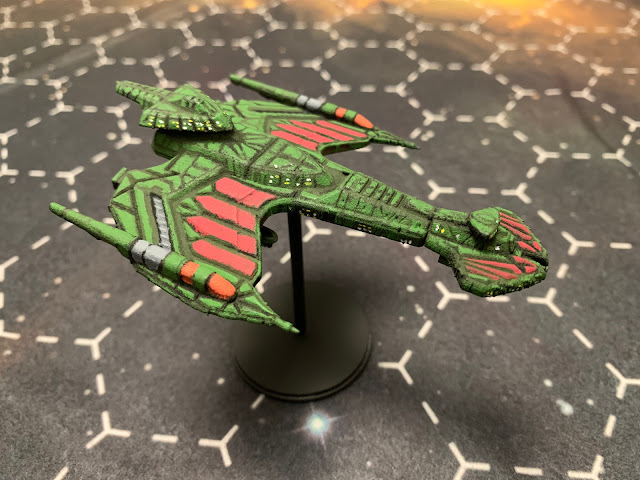 This is the Klingon battleship.  It shows up in a whole 2 episodes of DS9 (and in one of those episodes it has like 30 seconds of screen time before it gets One=Shotted (blown up) by a supped up version of the Enterprise) but it's gotten really popular since then.  It looks the part of a big dangerous ship. 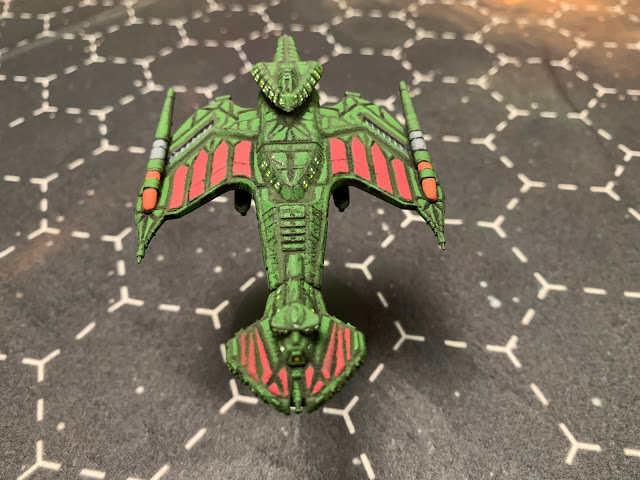 FUN FACT: Vor'cha and Negh'var in Klingon mythology were brothers.  One was a brilliant thinker of strategy and tactics and the other a ferocious warrior and battle leader.  Both fell in love with the same woman and wanted to marry her, and killed each other over her.  Crazy huh;  Klingon history is almost like a Shakespeare play.  And you would think that the strategic thinker who knows how to see the long picture would recognize that the bloom comes off the rose  and let the other have her...
Whole fleet
What's a post about star ships without some pics of the whole fleet huh?
The bases aren't totally done yet.  They need some labels and a little bit of stars.  I finally settled ona  40mm round base with a washer glued to the bottom for stability.  The flight pegs are 2" or 3" which provides a nice height differential.  The ships are secured to the flight peg by magnets.  SUPER STRONG rare earth magnets.
Full Speed Away From Here
You've wasted enough time here.  Time to move on to something productive.  But come back later if you like Star Trek because I'll be doing this stuff for the next month and a half.
Thanks for reading.
Double thanks for writing  comment.
Till next time.
EDIT: Shopping Cart
For anyone looking to waste your time in a similar fashion; here are the links to Shapeways where I purchased the miniatures.  I got them all in "smooth fine detail' plastic except for the Neghvar which was in white versatile plastic because the price for the miniature in smooth fine detail was too high for my broke butt.  I meant to include links in the original post but forgot as I was too busy being Hilarious.
Bird of Prey
"Renegade"
Vorcha
Vorcha torpedo (this is the hammer head on the vorcha body seen in the fleet pic)
Neghvar
Posted by Stew at 9:07 AM